Truth in Jest: 200 Years of Social Satire and Humor in Western Art 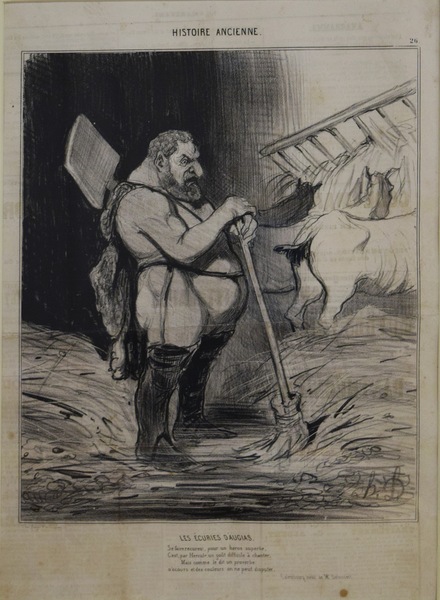 Throughout history artists have used humor in their works to call attention to social issues or simply to entertain. Works illustrating this in the MOAS collection span nearly 200 years with famous examples by Honoré Daumier (French, 1808-1879), France’s first and most important social satirist, to those by Norman Rockwell (American, 1894-1978), 20th Century America’s favorite social commentator.

Honoré Daumier became famous for frequently publishing in Les Charivari over the course of many years as he critiqued French culture, society and politics in his cartoons.  In the “Histoire Ancienne” (Ancient History) series he weighed in on the intense debate in the 1840s between Classicism and Romanticism.  Leading proponents of Romantic art, such as Eugene Delacroix (1798-1863), felt that artists should let go of the tired classical ideal and Daumier jumped into the fray by making fun of classical myth.  Here he shows the mighty Hercules reduced to a common stable hand as he mucks out King Augeas’s stables, the fifth labor assigned to him by King Eurystheus.  According to the Greek myth, this was a monumental task as the livestock numbered over 3,000 and the stable had not been cleaned in 30 years. Hercules was given only one day to complete the job and Daumier’s super hero looks less than happy with the task ahead.