The North Wing of the Museum of Arts & Sciences is one of the original wings of the Museum. The North Wing features permanent collections and exhibits such as the Kenneth Worcester Dow and Mary Mohan Dow Gallery of American Art, the Helena and William Schulte Gallery of Chinese Art,  the Helene B. Roberson Visible Storage Building, and the Anderson C. Bouchelle Study Center and Gallery for International Decorative Arts. The North Wing also contains several spaces for rotating and traveling exhibitions. 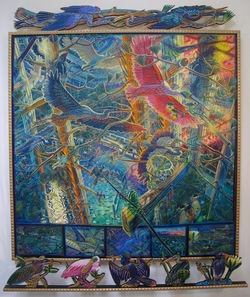 Mark Messersmith was born in Missouri but has called Florida – particularly, Tallahassee – home for years. One of Florida’s most accomplished painters, his style can only be described as ‘fantastic,’ not only for its quality but, also, due to his unique style based on high-keyed, almost fluorescent color combined with densely-packed, dynamic images of the Florida backwoods like you have never seen them before.

These paintings explore themes of spirit and struggle within our modern world’s “natural environments” as plants and animals jostle to survive in small isolated natural habitats as they feel the encroachment of their inevitable forced migration, dislocation, or isolation. 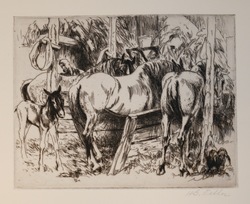 Farm Life and Other Scenes: The Art of Henry George Keller from the Collection

A native of Cleveland, Ohio, Henry George Keller (1869-1949) studied at prominent art schools in Germany before returning to the states where he attended the Art Students’ League in New York and Cincinnati School of Art in the early 1900s. He worked as a lithographer to finance his art education and joined the teaching staff at Cleveland School of Art where he served until 1945. Skilled in watercolor, pencil drawing, lithography and etching, Keller represents a generation of American artists who shunned Modernism and preferred subject matter, styles and techniques of the Old Masters as he rendered his early 20th century views of Midwestern America. 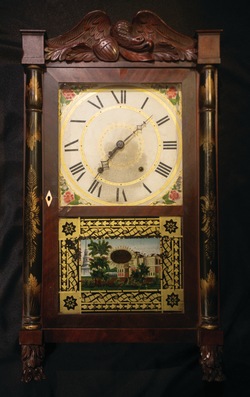 Upon the establishment of the new Republic in the United States of America, its first citizens adopted much from French neo-classicism to give the new Republic the same dignified appearance they felt it deserved. Sometimes known as "American Federal," the first style adopted by our new country in the early 19th century clearly reflected the great style of the revolution in France. The Museum of Arts & Sciences brings together in this exhibition fine examples of American Empire furniture, decorative arts, and period paintings from its collection to illustrate the transition from French to American in these works as the artists and craftsmen of the new United States attempted to make the style uniquely American. 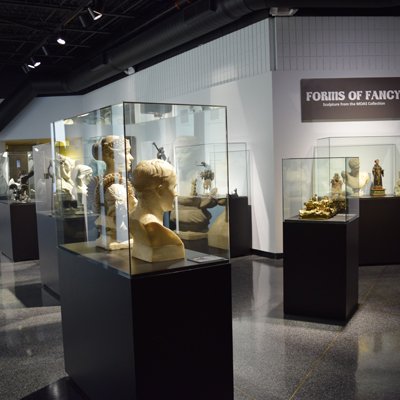 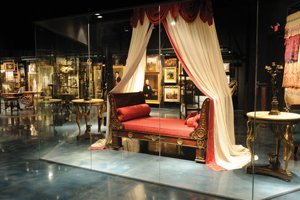 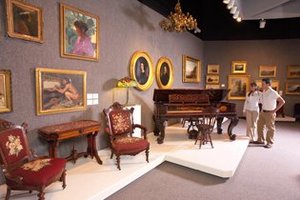 After three years of planning and one year of construction, the now 4,000 square foot gallery finally opened its highly-anticipated North Wing (now part of a larger North Wing), also known as “Arts in America: 1700- 1900” on May 20, 1986. This museum gallery was the only one of its kind in the state of Florida at the time. The historic new gallery was designed to showcase selections from the Museum’s large and growing American collection of furniture, paintings, watercolors, drawings, and decorative arts including silver and glass. The gallery is interpreted chronologically with emphasis on the Pilgrim Century, the Eighteenth Century and the American Victorian Period.

This one-of-a-kind gallery is highlighted by 18th and 19th century silver, gold, furniture, mirrors, and other art objects. The Anderson C. Bouchelle Study Center and Gallery for International Decorative Arts and its adjacent gallery contain over 600 objects from the Museum’s collections. From the Carrera marble statue of a classical maiden at the gallery entrance, to the richly-colored Tiffany-inspired Romeo and Juliet glass door at the rear, this gallery installation is a feast of the decorative arts. 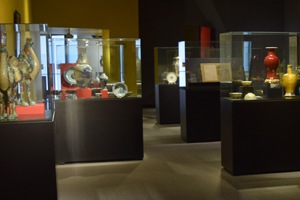 Established in 1996, the Schulte Gallery showcases over 80 pieces of Chinese art representing thousands of years of Chinese history. The collection includes a selection of decorative Chinese arts donated to the Museum from the Schulte family, along with works of art from other donors.