Tuscawilla Preserve is a lush 62-acre virgin Florida coastal hydric hammock and a habitat for numerous endangered species of flora and fauna. Opened in 2005, the education complex contains over 1/2 mile of boardwalks and nature trails as well as an education center and interactive learning stations. 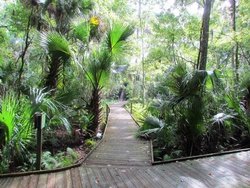 1948 Nancy Shields West and Alys Clancy, two women actively working to beautify Daytona and preserve its remaining natural areas, garnered the support of area garden clubs and residents and formed the Council of Garden Clubs of the Halifax District. Mrs. West and Mrs. Clancy persuaded the City of Daytona Beach to purchase the property for $38,000, and Tuscawilla Park was designated a public park and forest preserve for the city.

1971 The Museum of Arts and Sciences made a permanent home in Tuscawilla Park. The museum worked with the City of Daytona Beach, the Council of Garden Clubs, and many individuals and community organizations to raise awareness about Tuscawilla's fragile ecosystem. In 1972, Tuscawilla's first educational nature trails were cut. Margaret Rogers, longtime chair of the Council's Tuscawilla Committee, continued conservation efforts and organized education and beautification projects in the park.

1993 The Garden Club of the Halifax Country and the Chapman S. Root family joined the museum to build the Window in the Forest. This open-air pavilion with a striking view overlooking Tuscawilla offered shelter for hundreds of school children and other educational programs for many years.

2004 The Museum refurbished the Window in the Forest and enhanced the surrounding nature trails with raised boardwalks and outdoor exhibits. These became the focal point of the new Klancke Environmental Education Complex and Endowment. The Garden Club of the Halifax Country sponsored a Sensory Garden to act as the trailhead for the complex, to which the Guild of the Museum donated a Great Blue Heron sculpture by artist Paul Baliker. 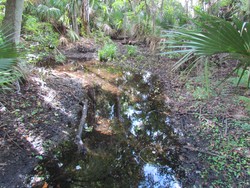 Tuscawilla Preserve is a special type of wet forest called a hydric hammock. These are one of the rare plant communities in Florida. Although similar to swamps, hydric hammocks are drier than swamps and usually have standing water in them for shorter periods of time. For example, the Bald Cypress, which is one of the most common trees in Florida's swamps, does not occur in Tuscawilla Preserve.

The ground here, however, is often saturated, which means there is little oxygen for the root systems down deep. Therefore, most of the trees' roots are on or very near the surface of the ground, often making them susceptible to being blown over easily. The trunks of many species are also swollen at the base to provide additional stability.

Tuscawilla Preserve also acts as a reservoir for water runoff from surrounding areas. The water often stands in the preserve for several weeks. The wet conditions in the preserve coupled with the calcium-rich soil provide the backdrop for the development of this diverse forest. 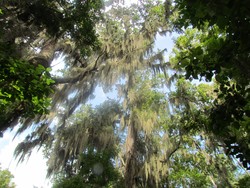 The growing conditions in Tuscawilla Preserve provide a perfect home for many species of plants that are not naturally found in Florida. These are called exotic plant species, and they have become a severe problem throughout Florida as these invaders compete with our native species for ever-decreasing space.

At least 13 exotic plant species have been identified in Tuscawilla Preserve, including Boston Fern, Sour Orange, Wild Taro, Syngonium, Wandering Jew and Air Potato. Some more invasive than others, many of these species are ornamental plants grown in people's yards that have spread into the forest, or the seeds have been passed by birds and other animals.

Not only plants but also exotic animals are competing for space to survive. The Green Anole, a very familiar lizard in our yards and forests, is rapidly being displaced by the Brown Anole. The Brown Anole is an escaped exotic lizard found throughout the Caribbean islands. In the last 20 years, this lizard has colonized much of Volusia County.

The Eurasian Collared Dove is another newcomer to Volusia County having arrived only about ten years ago. It has become well-established here along with House Sparrows and Starlings. 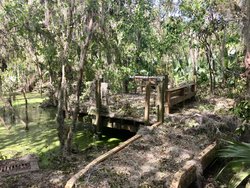 The hurricanes of 2004 and 2016 devastated many areas of the forest floor as is evident throughout the preserve. Hundreds of trees were broken off, blown down or blown over. The boardwalk you are standing on was heavily damaged.

But this forest has stood here for centuries. The hurricanes have created new openings in the forest canopy, bringing sunlight to the forest floor. This will change the complexion of the species composition in the forest, allowing plants that are more light tolerant to get a foothold in the park. Seedlings of various species will colonize these openings. This will begin the process of plant succession, where the light tolerant species will flourish for some time and will eventually provide cover for the shade-loving species. These deep-forest plants will then take hold in the shaded understory and will eventually grow to recreate a new forest canopy. This succession may take many years, but eventually, the forest will return.

Fallen trees will become the home for plant species that will find a foothold on its drier, elevated surface. Mosses and ferns will take advantage of the new surface, collecting leaves and soil that will host other small shrubs until eventually tree saplings will take hold. Fungi and insects will decay the log. The fallen giant will become a nursery-ground, recycling its nutrients back to the forest. In its place will be a new tree that will reach up to help create a new forest canopy.

On Saturday, October 26, 2019 the Museum partnered with the Atlantic Center for the Arts on a Soundwalk to Tuscawilla Preserve where guests spend the afternoon listening to the environment. The links provided by Dr. Nathan Wolek, Professor of Digital Arts at Stetson University, provide a glimpse into the sounds of the environment. 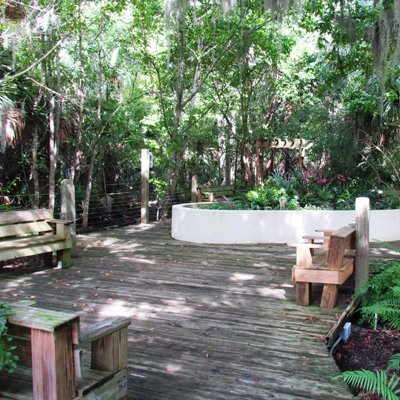 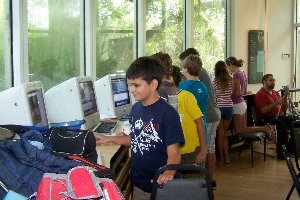 After more than three decades of visioning and planning, in 2005, the Museum of Arts and Sciences proudly opened the Klancke Environmental Education Complex in Tuscawilla Preserve, a unique natural oasis situated in the middle of Daytona Beach, Florida. The project was funded, in part, by the State of Florida, the County of Volusia and the Garden Club of the Halifax Country, and is supported by the Klancke Environmental Endowment as well as individual contributors. The Klancke Environmental Education Complex allows for greater accessibility to the preserve through raised boardwalks, discovery stations with hands-on exhibits, sensory gardens and educational programs. 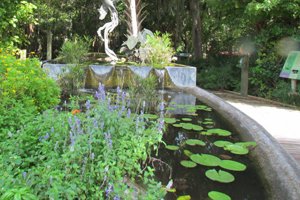 Acting as a gateway into the Klancke Environmental Education Complex, the Sensory Garden welcomes visitors to Tuscawilla Preserve. It is a place of transition; a contemplative space that allows the visitor to decompress from the busy, built environment of the city to the quiet of the rich forest environment. The museum is indebted to the Garden Club of the Halifax Country, its partner in developing the Sensory Garden, where visitors of varying physical abilities can explore with all the senses -- touch, sight, smell and sound. The Sensory Garden has special areas for native wildflowers, herbs, a butterfly and hummingbird garden, and a rock garden. Rest and enjoy the pond with its trickling waterfall and the graceful Blue Illusions, a bronze-sculpted Great Blue Heron by Florida artist Paul Baliker. This sculpture was donated to the garden by the Guild of the Museum in recognition of its 40th year of dedicated service. Take your time and decompress from the harried pace of daily life. Let the Sensory Garden expand your awareness and prepare you to enjoy the forest preserve.