A Treasury of Indian and Persian Miniature Paintings 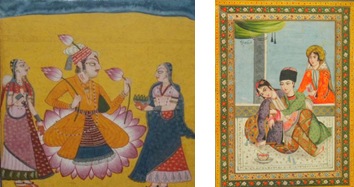 The Five Pandava Brothers and Durpadi Encounter a Demon in a Forst, ca. 1605, goucache and gold on paper

The complex cultural heritage of India is woven into a rich, colorful fabric in this compilation of Indian miniature paintings. The first Indian paintings to receive notice and appreciation in the West were the miniature, created for the Mughal courts of India. Their realistically rendered tableaux of court life, warfare and portraiture appealed to Western tastes. Other works comprising this exhibit include Deccani: Muslim paintings from South India, Rajasthani: Paintings from the plains in North India, Pahari: Paintings from the Himalayan foothills, and the Dhruva Folios, which illustrate portions of the Prince Dhruva story from the fourth book (Pusan) of the Bhagavata-Purana.

The form of Persian miniature was developed during the Mongol and Timurid periods (13th-16th Century). The most important function of miniature paintings was illustration. The miniature developed into a marriage of artistic and poetic languages depicting many traditional texts. They gave a visual image to the literary plot, making it more enjoyable, and easier to understand.

Included are images from the Rustam story cycle, fables such as the lion and the ox, portraits and calligraphy panels representing the three most influential schools in Shiraz, Tabriz, and Herat. Images were created in full-color gouache to linear watercolor. Works in the exhibition date from the 15th century to the 19th century.

Professor Gulnar Kheirallah Bosch, an expert on Persian art, provided the text. She taught at Florida State University. The works are gifts to the Museum of Arts & Sciences, Daytona Beach from Kenneth Worchester Dow and Mary Mohan Dow.