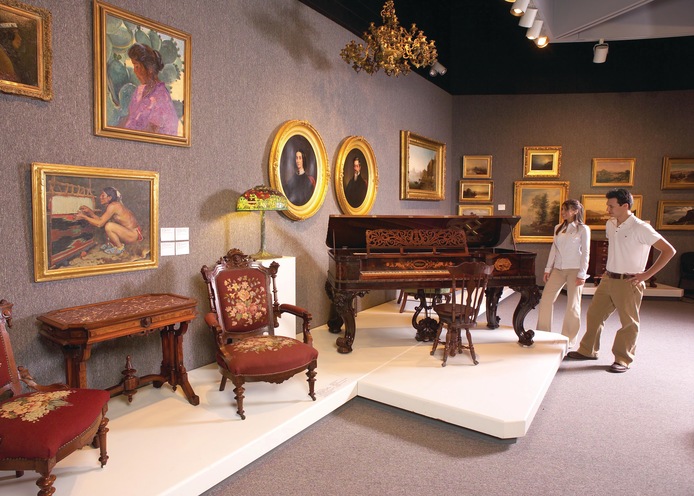 After three years of planning and one year of construction, the now 4,000 square foot gallery finally opened its highly-anticipated North Wing (now part of a larger North Wing), also known as “Arts in America: 1700- 1900” on May 20, 1986. This museum gallery was the only one of its kind in the state of Florida at the time.

The historic new gallery was designed to showcase selections from the Museum’s large and growing American collection of furniture, painting, watercolors, drawings, and decorative arts including silver and glass. The gallery is interpreted chronologically with emphasis on the Pilgrim Century, the Eighteenth Century and the American Victorian Period.

When it first opened, the gallery included works that began with the immigration of Europe through 18th-century ports such as Boston, New York, Philadelphia, Newburyport, Savannah, or Charleston, all of which were represented by items in the collection. There were also simple Colonial styles reflecting early European influence that evolve into more elaborate designs such as westward expansion and industrialization which made household goods more readily available to the American middle class.

Just a few short years later in 1989, Kenneth Worcester Dow and his late wife, Mary Mohan Dow, presented their elaborate art collection to the Museum of Arts and Sciences. Their collection included early folk, as well as more academic portraits, Hudson River School landscapes, ship paintings and seascapes, still-life paintings, and genre scenes. Even though the range of the collection is quite broad, every painting has one thing in common: quality.

Text panels discuss cultural history, subject matter and specific relationships that exist among many forms on exhibits in the gallery. Interpretive labels both identify and discuss each individual work in the exhibition.

As of today, the “Arts in America” collection consists of donated portraits and antique furniture from the Dow family among other portraits, aged furniture, and silverware collections donated from various families. The Arts in America collection will bring you back in time and give an insight on early American lifestyles.

Kenneth Worcester Dow was born in Detroit, Michigan. He was the only child of a businessman who worked in wholesale lumber and real estate. Mr. Dow attended Detroit University and Grosse Point University before studying Geology at the University of Michigan in Ann Arbor. However, his graduate studies were interrupted when he was drafted into the U.S. Army during World War II.

Dow’s parents passed when he was in his 20’s, which resulted in him becoming very close to his aunt and his grandmother, who both spent their winters in St. Augustine. While spending time in St. Augustine in 1939, he discovered the historic Prince Murat House, which just so happened to have a “for sale” sign in front of it. Dow decided to purchase the notable house for only $6,000.

While growing up in Detroit, Dow often visited his mother’s family in Massachusetts. He always has a passion for the quaint, seaport of Rockport, where he eventually built a house in 1934.

In the early 1940s, he met a young, Irish dentist whose name was Mary Mohan, who he eventually married. Fortunately, she shared the same love for art and traveling as he did. For over 30 years, the pair continued to travel the world and expand their art collection.

Tragically, Mary passed suddenly in 1986. With no children and a large, significant art collection, Mr. Dow decided to share his art with the public through the Museum of Arts and Sciences. The Dow Gift included:

Mr. Dow continued to collect art at local flea markets, estate sales, and antique stores until his health started to decline at the age of 90. His memory lives on in his many beloved treasures that can be found at the Museum of Arts and Sciences.