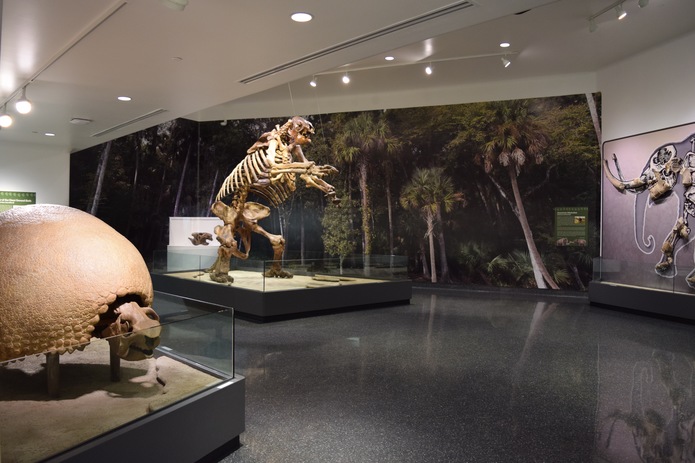 The Museum of Arts and Sciences (MOAS) has dedicated a portion of the museum to the prehistory of Florida. This section of the Museum includes preserved insects and butterflies, shells and teeth, along with the remains of a giant ground sloth, mastodon, and glyptodont that were found in our own backyard!

This division of the Museum holds quite the collection of preserved bugs and butterflies. The bugs range from a variety of beetles and cockroaches to grasshoppers and crickets. Can’t tell which bug is which? No problem! There is a handy guide right next to the exhibit to explain what each of the 67 bugs are. The butterfly exhibit is quite pleasant and is composed of butterflies ranging from all sorts of shapes and sizes.

As you begin to walk in to the Prehistory of Florida Gallery, along with the insects and butterflies, you will discover a glass encasing preserving gorgeous mollusks that can still be discovered along Florida’s coastline. These mollusks are considered a house for the invertebrate animals that live inside them. There are over 85,000 species of mollusks, which makes it the second most diversified kind of organism behind insects. They live in both saltwater and freshwater ecosystems and date back to 550 million years ago.

The glyptodont is another prehistoric mammal that lived almost two million years ago. Their size and mass is the equivalent to a small car. They could grow up to seven-feet and weigh about half a ton. This unique species was almost covered head-to-toe in armor that was made up of about 1,000 osteoderms, which are bony plates about 2.5 centimeters thick. Their legs were short and stout, the perfect size to hold the weight of the shell. Along with the giant ground sloth, this prehistoric mammal was discovered at Reed Canal Park back in 1975. 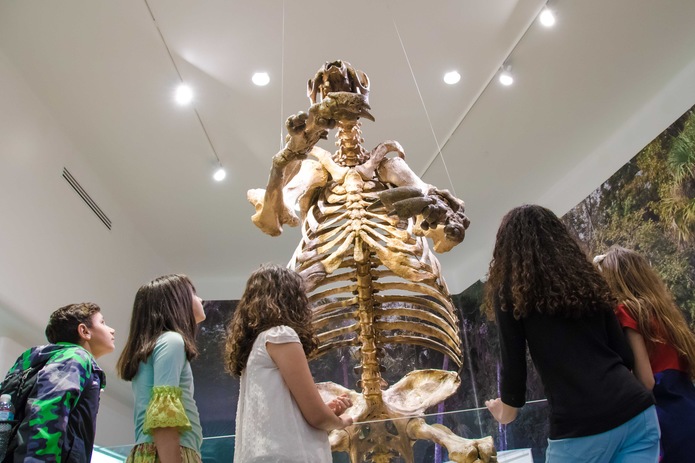 Imagine a 13-foot, three to five ton mammal strolling through the city of Daytona Beach. Even though the sloth is a vegetarian, it would not change the fact that actually seeing the massive mammal would be quite terrifying. Thankfully, the human race was non-existent 130,000 years ago, during the era of the Giant Ground Sloth.

This Giant Ground Sloth was discovered in October 1975 at the bottom of a retention pond in Reed Canal Park, now referred to as “The Daytona Beach Bone Bed.” Workers and volunteers spend two-and-a-half years searching for the bones of the sloth. Once the remains had been excavated, Dr. Gordon Edmund, Curator of Paleontology at Canada’s Royal Ontario Museum, brought the remains up to Canada where he identified and reconstructed the sloth for the Museum of Art and Sciences.

Due to the remains being found 12-feet below the ground, experts were able to identify the other animals that lived around the sloth, including a mammoth, mastodon, and the rare Cuvieronius Elephant that roamed with tapir, capybara, palaeolama, and a glyptodont (a nine-foot armadillo). Along with the sloth, experts also discovered the remains of about 50 other species of animals, including some that are still alive today, such as the deer, bobcat, and raccoon.

Dr. Gordon Edmond stated that the skeleton of the Giant Ground Sloth is the best preserved and most complete fossil collection of this species ever found in the history of North America.

Shockingly, one of the most impressive finds of the excavation was the plant material. Based on their knowledge of the newly-discovered plant life, scientists were able to piece together the entire environment that supported the enormous sloth and other animals. The seeds of several trees revealed that this was a swamp forest near a marsh. Pollen trapped in the black organic soil was extracted and could still be identified after 130,000 years.

This impressive piece of Daytona Beach history can be seen at the Museum of Arts and Sciences in the Prehistory of Florida Gallery.

This infamous Ice Age mammal was discovered at a construction site in Daytona Beach on Thanksgiving weekend 2011. The dark, gruesome mud that surrounded the skeleton was one of the key components in preserving the remains. The dense mud fends off oxygen, therefore, preserving the fossils.

A mastodon is an extinct, prehistoric elephant that vanished from the fossil record 11,000 years ago. This large mammal was short, stocky, heavily muscled and stood about seven-and-a-half-feet tall when measured at the shoulders.

They roamed throughout the forests in herds, feeding on trees, bushes, and some grasses. The mastodon and wooly mammoths are distant cousins. Both species had thick, shaggy coats, however, their similarities stop there. Mastodons had large rows of conical cusps on each molar while mammoths had very flat teeth. Male mastodons tended to be larger than females and males also had more curvature to their tusks.

French soldiers discovered the first scientifically researched mastodon bones in 1739 in Lick State Park, Kentucky. The soldiers transported them down the Mississippi River and then transported them to Paris, France, where they were studied at the Museum of Natural History. French anatomist, George Cuvier officially named the elephant remains the “mastodon.”

Through the study of the mastodon, it has been discovered that mastodons separated from elephants about 27 million years ago. The mastodons eventually moved out of Africa and in to Asia, and ultimately crossed the Bering Land Bridge into North America and finally migrated in to Florida.

In 1806, anatomist George Cuvier assumed that mammoths and mastodons were extinct. For the time period, this was unbelievable, for it was the first time that the community accepted that a species no longer existed.