One of the many exhibits in the Root Family Museum is the train station. This exhibit includes two fully-restored, mid-century train cars that illustrate the lives of early American industrialists. The “Dell Rapids,” and the “Silver Holly” were two cars owned by the Root Family, one of which they utilized throughout their lives. 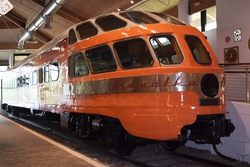 Only six train cars were made for the Milwaukee Railroad. One was destroyed by fire, three were sold to the Mexican government and the Root Family owns the fifth. The whereabouts of the sixth car are unknown.

The Dell Rapids Milwaukee Hiawatha sky-top lounge car was part of a fleet of streamlined beaver-tail passenger cars built by the Chicago, Milwaukee, St. Paul and Pacific Railroad (“The Milwaukee Railroad”) in 1948.

This train ran between Chicago and Minneapolis and claimed to conquer “400 miles in 400 minutes,” including its 12 stops. The Milwaukee Railroad was built for four cars: Cedar Rapids, Coon Rapids, Priest Rapids and the Dell Rapids. All of these cars were retired in 1970 and the Priest Rapids was scrapped.

When the Root Family purchased the car, it was in rough condition. There were weeds growing through the floor, and shortly thereafter, it was vandalized while being housed in a storage facility in Sanford, Florida. The Root Co. stainless steel covers over the heating pipes were pried off so the copper underneath could be stolen. Also, all but two seats were also stolen from the car.

Approximately ten years later, the FBI found them in Alton, Illinois, where the man in charge of restoring the car, went to pick them up. Those same seats have been reupholstered and repaired and are currently in the Dell Rapids. The restoration of the car began in 1985 and lasted for an estimated 18 months. 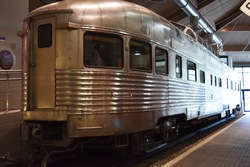 This car was built as C&O Dome Observation Coach #1876 by the Budd Co. for the Chesapeake and Ohio Railroad’s “Chessie” line. However, it was never used on the “Chessie” and was sold in 1950 to be used on the California “Zephyr”, a joint effort between the Western Pacific, Burlington and the Rio Grande Railroads. Originally, the car was an all-coach car seating 60, with 24 in the dome and 36 downstairs.

Retiring from the lines in 1970, the car was rebuilt and refitted by the Autoliner Corporation into its present configuration to accommodate Chapman S. Root and Susie Root and their six children, who used it on the Florida East Coast Railroad and other lines. The car was renamed by the Roots for a family friend, Holly Stover, vice president of the Chicago, Burlington and Northern Railroad.

This 1950’s domeliner has since been renovated. The latest renovation replaces the antique, oak window frames with a special curved glass ordered from California. This newly constructed car includes four bedrooms, three bathrooms, kitchen, and parlor.