The Root Family and Coca-Cola 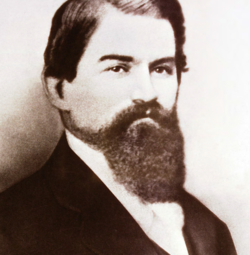 In 1886, the Coca-Cola Company slid into history when Dr. John S. Pemberton’s curiosity led him to discover the tasty soft drink that we know and love today. Dr. Pemberton created a syrup and brought it to his neighborhood pharmacy where he mixed it with carbonated water and those who tried it believed it to be superb. Dr. Pemberton’s partner and bookkeeper, Frank M. Robinson, is credited with naming the beverage “Coca-Cola” as well as using the classic, recognizable script still used today.

Preceding his death in 1888, Dr. Pemberton sold parts of his company to various businessmen, one of these men being Asa G. Candler, who bought the majority of interest of Coca-Cola. Candler became the exclusive owner of Coca-Cola. He paid $1,200 for the machinery, equipment, and Coca-Cola’s secret formula. Under Mr. Candler’s reign, Coca-Cola expanded to soda fountains beyond the Atlanta area.

Fascinated by how fast Coca-Cola flourished, Joseph Biedenharn yearned to make the popular soft drink mobile. In 1894, Mr. Biedenharn created a small bottling machinery in the back of his small Mississippi soda fountain, being the first person to put Coca-Cola in bottles. He used a bottle called the “Hutchinson,” which was available for any kind of drink.

About five years later, mass-bottling was made possible. In 1899, three businessman in Chattanooga, Tennessee secured exclusive rights to bottle and sell the high-demand soft drink for only $1. Shortly thereafter, Benjamin Thomas, Joseph Whitehead and John Lupton established the globally-used Coca-Cola bottling system. By 1899, over 280,000 gallons of syrup were sold and by 1913, almost 7 million gallons had been sold.

When Coca-Cola was faced with the challenge of other competitors, bottlers agreed upon having a bottle that would stand out to the public. Benjamin Thomas and his associates set a deadline for bottling companies to come up with a distinct, marketable bottle for the ever-so-popular soft drink. 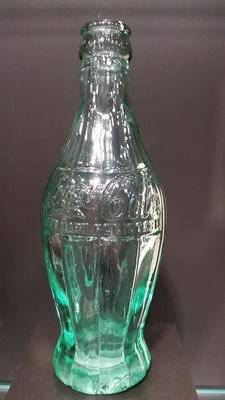 Among the eight to ten participants was the Root Glass Company of Terre Haute, Indiana. Members of the Root Glass Co., Chapman J. Root, William Root, Alexander Samuelsson, Earl Dean, and Clyde Edwards, worked endless hours in complete secrecy, manufacturing what they hoped would be the new, unmistakable bottle for the beloved carbonated beverage. They created a bottle in which they nicknamed the “hobbleskirt,” due to the resemblance of the skirt-style in 1910. Their historic bottle was derived from the shape of a cocoa bean, with an elongated shaped and distinct ribs. Once the bottle was developed, Root Glass Company put forth a patent under Samuelsson’s name. The patent was granted on November 16, 1915. This date was later included on the final design of the bottle.

In the early 1916, a committee composed of bottlers and 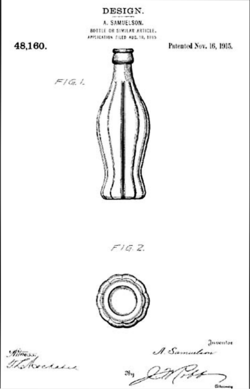 Company officials met to hopefully decide on the design of their bottle. Without a doubt, the Root version was a clear winner. The Coca-Cola Company and the Root Glass Company entered an agreement in which the bottle was to be made throughout six factories in the United States. The contract also called for the bottles to be colored in “German Green,” which was later changed to “Georgia Green.” The weight of the bottle was to be no less than 14.5 ounces and was filled with 6.5 ounces of Coca-Cola, which means that the bottle weighed more than a pound!

For many bottlers, producing this heavy bottle was a very expensive change. They had to be persuaded that this alteration would be financially worth it. Coca-Cola began to do that with national advertising, featuring this newly exclusive bottle. The first national calendar featuring the bottle made its debut in 1918, and by 1920, almost all of the bottlers were using this peculiar bottle. The 6.5 ounce bottle was the only size package available for Coca-Cola until 1955.

Coincidentally, in December of 1923, the patent for the bottle was renewed and the newly nicknamed “Christmas Bottle” made its appearance and the date on the bottle was changed to December 25, 1923. By 1951, all patents on the bottle had expired. Representatives from Coca-Cola contacted the Patent Office claiming that the bottle’s shape was so well-known that it should be granted Trademark status. It is rare for a commercial package to be granted that status, however, Coca-Cola made history again. On April 12, 1961, the Coca-Cola bottle had officially been recognized as a trademark. This was confirmed by a study conducted in 1949 stating that less than one percent of Americans could not identify the Coca-Cola bottle by the shape alone.

Although the shape is uni 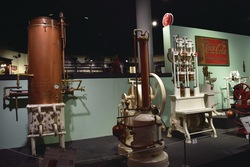 versally recognized, the configuration of the bottle has evolved through the years. The original patent of the 1915 bottle was slightly wider than today’s bottle. Today’s aluminum bottle is a 22nd century update of the originally designed bottle. The company took advantage of the classic shape on the cover of the 1996 Annual Report when they placed a silhouette of the bottle with the caption, “Quick, Name a Soft Drink.”