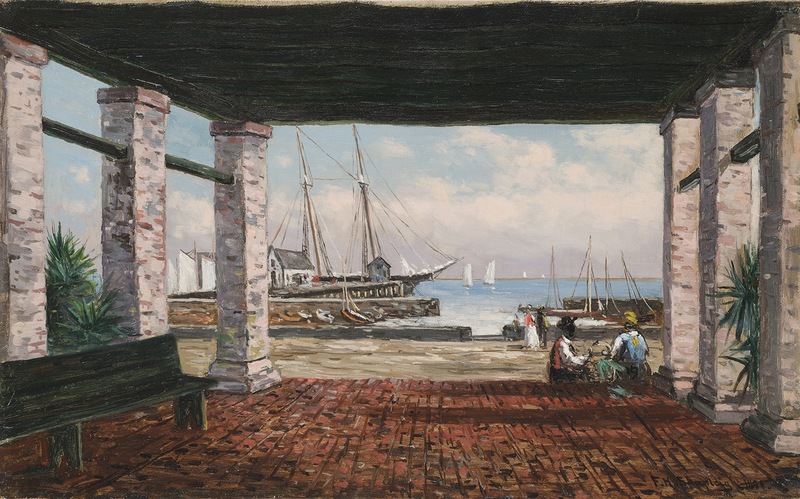 St. Augustine is the oldest continuously occupied European-established settlement within the borders of the United States. A brief history of the city begins in the 16th century. It was founded on September 8, 1565, by Spanish admiral Pedro Menéndez de Avilés, Florida’s first governor. He had first sighted land on August 28, the feast day of St. Augustine. The city served as the capital of Spanish Florida for over 200 years.

Spain ceded Florida to the United States in 1819, and when the treaty was ratified in 1821, St. Augustine was designated the capital of the Florida Territory until Tallahassee was made the capital in 1824. Since the late 19th century, St. Augustine’s distinct historical character has made the city a major tourist attraction.

The two works by George Harvey in this exhibition show us the Plaza of the Constitution and a view to the fort from a location just west of the north gate in the 1850’s. After these scenes were recorded, in 1861 Florida joined the Confederacy after the Civil War and Confederate authorities remained in control of St. Augustine for fourteen months, even though it was barely defended, and in spite of the Union blockade of shipping off the coast. Union troops occupied St. Augustine in 1862 and controlled the city through the rest of the war. A small watercolor depicts a blue-coated Union soldier sometime after the Union occupation. The town’s economy already devastated, many of the citizens fled.

Henry Flagler, a co-founder of the Standard Oil Company, spent the winter of 1883 in the city and found it charming, but considered its hotels and transportation systems inadequate. He had the idea to make St. Augustine a winter resort for wealthy Americans from the north, and to bring them south he bought several short line railroads and combined these in 1885 to form the Florida East Coast Railway. He built a railroad bridge over the St. Johns River in 1888, opening up the Atlantic coast of Florida to development.

Flagler began construction in 1887 of two large hotels, the 540-room Ponce de León Hotel and the Hotel Alcazar, and bought the Casa Monica Hotel the next year. His chosen architectural firm, Carrére, and Hastings, radically altered the appearance of St. Augustine and give it a skyline characterized by the use of the Moorish Revival style. With the opening of the Ponce in 1888, St. Augustine became the winter resort of American high society.

After the Florida East Coast Railroad had been extended southward, the rich mostly abandoned St. Augustine in the early 20th. St. Augustine nevertheless still attracted tourists, and eventually became a destination for families traveling in automobiles. Calendar art presents a Chrysler Airflow parked outside the Oldest House verifying the new mode by which to visit the city. The tourist industry soon became the dominant sector of the local economy. With the help of state and federal government monies, St. Augustine began a program in 1935 to preserver thirty-six surviving colonial buildings and reconstruct others that were gone.

In 1965, St. Augustine celebrated the quadricentennial of its founding, and with funds from the State, began to restore part of the colonial city. Paintings after that date reflect the restored condition of their subjects. In 2015, St. Augustine celebrated the 450th year of its founding with an exhibition of historic artworks from the Brown Collection including many of the works in this gallery.