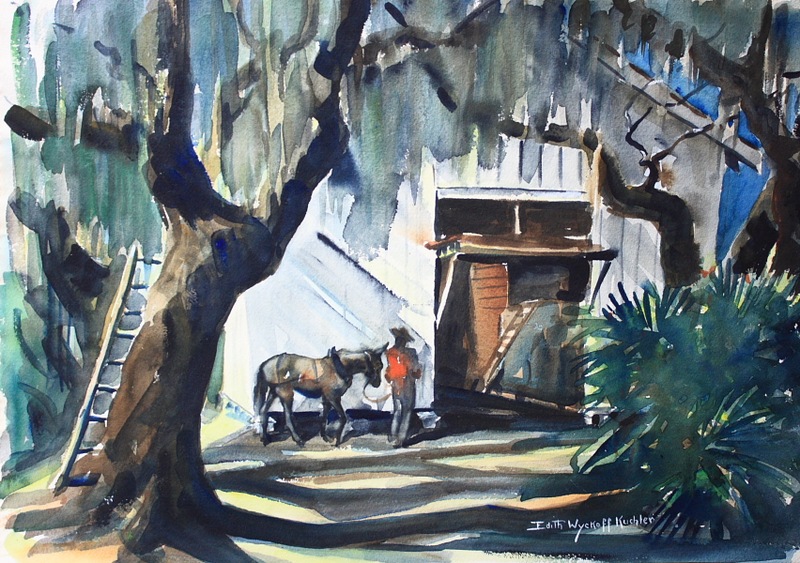 From the mid-19th century on, artists came from all over the world to Florida where they found the perfect vacation spot or a great winter residence or the place to begin a new career. No matter what their reasons, they made art while they were here - art that was a response to their surroundings.

In Florida there were new vistas, old structures, contrasting light, lush nature and picturesque characters - all of which were irresistible as subjects. There was beauty in the exotic and colorful. The artistic minds were filled with ideas that needed expression. It is no wonder that visions of Florida became the subjects of their artwork.

The artists were often men. But women artists also came. The female artists like the males were both the well-known and established, and the talented but unheralded. The women depending on their interests and training made works in various media from oil on canvas to watercolors, prints and drawings on paper. And they created an amazingly diverse group of wonderful images in a wide range of mature styles. Fortunately, many of those works remain.

Noted women artists such as Laura Woodward (1834 - 1926) and Helen Savier DuMond (1872 -1965) came to Florida at the height of their careers - careers that included instruction in numerous national and international schools, national recognition via museum exhibitions and inclusion in the prominent art journals and texts of the time. Their artistic experiences were brought with them to the State and can be seen not only, in the works they produced in Florida, but also, in the works of artists who were taught by them and followed them.

Though inhabited streets and buildings in the prominent population centers of the State provide abundant subjects, the forests and swamps are also locations for the curious artist undeterred by the perils of hiking excursions into thickets and still water. For instance, Jane Peterson’s (1876 - 1975) forays into the Florida Keys led her to produce compositions with wild flora and fauna. Even without color, Florida wilderness has a distinct visual beauty. The nationally-recognized lithographer, Victoria Huntley (1900 -1971), composed swamp scenes with the wild beauty of black water and white egrets. She, then, masterfully turns her vision into an image on the lithographers’ stone and prints a striking vista in gradations from black through warm grays to white.

As Florida grew, it became home to a variety of typical human labors and eventually to human entertainments. Topics for art as diverse the nets of fishermen and circus performers drew the attention of women artists. A moment during a horse race at the famous course at Hialeah near Miami with its infield filled with strutting flamingoes is captured full gallop by Amy Jones (1898 – 1968). Her exuberant brushwork gives liveliness to the competing horses.

In each of the works there is a piece of the wonder that is the State of Florida. The artists found which subjects resonated with them in the truest terms and distilled the images of those subjects in the styles and media that they had developed throughout their careers. With this exhibition comes a greater understanding of the contribution of women artists to the glorious chronicle of Florida in art.

The Brown Collection contains more than 400 works by women. In the Museum there are other examples of works by women scattered throughout the other galleries in which the inclusion of them seemed appropriate. Illustrations on this panel show just two of the other works by women in the Collection.