An Interview with Painter, Robert Ross

A Q&A between Ruth Grim, Chief Curator and Gary R. Libby Curator of Art at the Museum of Arts & Sciences and painter, Robert Ross who is featured in the exhibition, Unique Perspectives: Paintings by Robert Ross on display May 18, 2020 through August 16, 2020.

You have said that coming to MOAS and seeing the art inspired you to be a painter. Which artists and/or works of art do you remember being a part of that inspiration? Or was it just the exposure to fine art in general?

I nearly majored in art in college but backed down because I didn’t know how I could earn a living as an artist. Instead, I made a career as a writer and editor at three universities. However, I always visited art museums and galleries everywhere I traveled. When I worked at Embry-Riddle Aeronautical University in Daytona Beach, I learned that the Museum of Arts and Sciences gave university employees free admission, and I became a regular lunch break patron. My visits there were moments of creative inspiration that strengthened my desire to be a painter. I especially enjoyed looking at the paintings by Cuban artists and Florida impressionists. In 2013 I took early retirement to become a full-time painter. 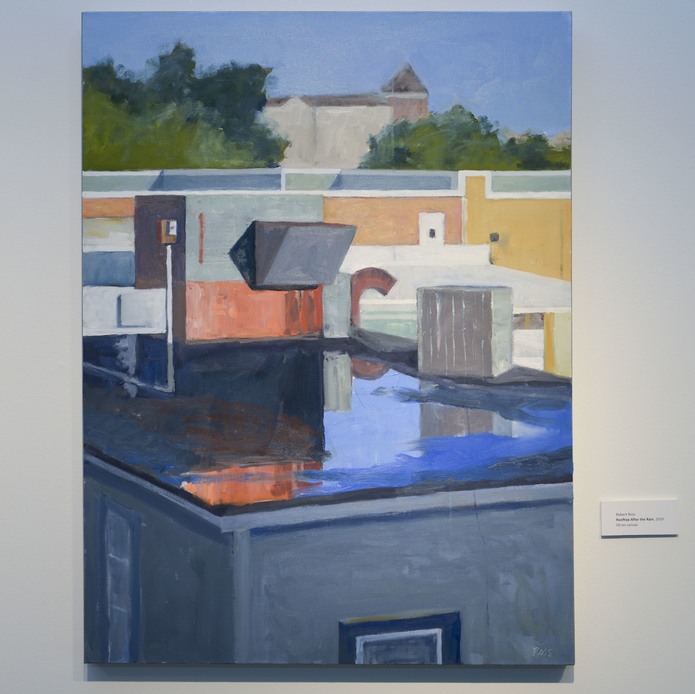 Rooftop After the Rain, 2019, Robert Ross, oil on canvas

I have titled your exhibition at MOAS "Unique Perspectives" because I felt you have an eye for finding the detail in an everyday scene that lifts it above the ordinary. Details that others might miss. Can you describe how you come upon these moments and capture them in paint? What in particular draws you to certain scenes and compels you to paint them?

I am drawn to shapes and the spaces between them. After painting for several years, I noticed that a common motif in my paintings involves two or three strong shapes with lots of space between them. It’s almost as if my paintings are about the gaps between things, spaces that are filled with a sense of expectancy. I find most of my subjects when I’m walking around or driving. I identify with places that are simple, quiet, overlooked, even hidden. In my paintings, I look for ways to create drama and mystery. I see the ordinary as beautiful. In a way, it’s a spiritual motivation. Sometimes it feels like I’m praying with paint, not words. During the quarantine for Covid-19, I’ve been interpreting my life indoors, so I’m painting in the kitchen, bathroom, bedroom, living room, and balcony. Those paintings are on my website (www.robertrossart.com) under the heading “Dispatches from an Interior.” 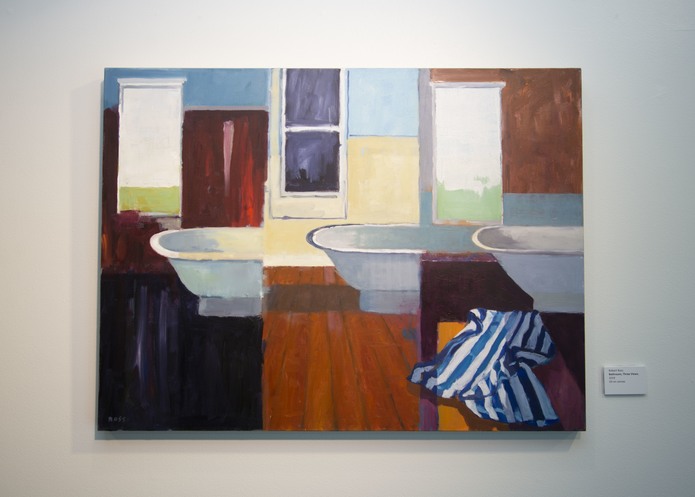 I have compared your paintings to the work of the early 20th century Precisionist painter, Charles Sheeler and his successor, Richard Diebenkorn, but you have pointed out that other artists such as Matisse have also been an inspiration and that there is an homage to these in your painting of three bathtubs in the exhibition. Can you tell us more about that?

“Bathroom, Three Views,” is an example of trying to make something from limited subject matter. Several summers ago, I took a series of photos in some abandoned farmhouses in Michigan. In one of the photos, looking through a doorway, you see part of an old bathtub on the right and a window on the left. Because I was shooting toward the light coming in through the window, everything in the photo is silhouetted, almost black and white. But I liked the simplicity of shapes and decided to see what I could make of it. As you said, I have studied Matisse, who painted colorful interiors with windows. I also study Richard Diebenkorn, who was greatly influenced by Matisse. And I had just seen a painting of bathrooms by Alex Kanevsky, a contemporary painter I admire. I decided to paint my bathtub/window image in three versions on one canvas, with each version channeling one of these artists. It was fun to invent color combinations and slightly alter the images so they seem to flow into each other while still being separate.

I’ve never consciously followed Charles Sheeler or the Precisionist painters, but it’s impossible to separate influences in art. The past informs the present in ways none of us can completely know or understand. Sometimes people ask if I’m a fan of Edward Hopper because my work reminds them of his paintings. I’ve never painted with Hopper in mind, although I love his watercolors done on Cape Cod. But he was one of Diebenkorn’s first influences, so who knows? Some artists are so well-known they simply inhabit our subconscious. 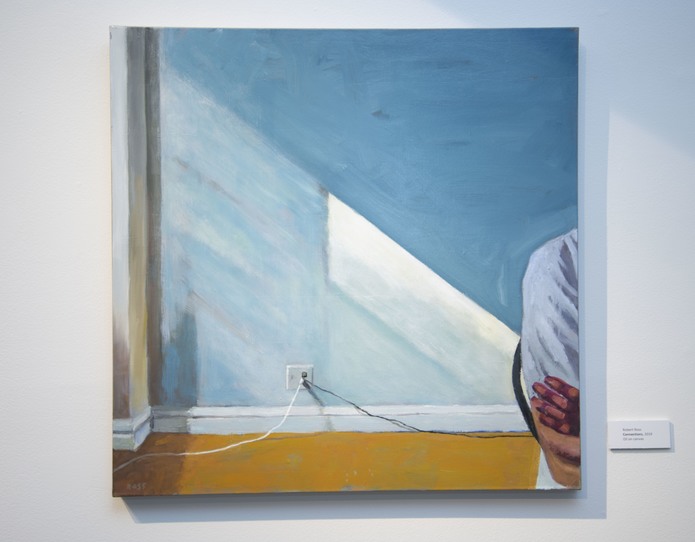 Another one of your paintings which I really like is called "Connections." Can you tell us the story behind this work?

I was visiting my brother in New York for a week. One morning, as we both drank coffee and talked in his condo, I was stunned by something right before my eyes. A shaft of sunlight was coming through the window to my left and slanting downward on the wall behind him. At the wall’s base, two cords, black and white, each coming from opposite directions, were plugged into an electrical outlet. At the right edge of my vision was my brother’s arm. Juxtapositions of elements like that – ambiguous and rich with possible meanings – are what I look for. They beg to be painted.

People are not a preferred subject in your paintings. That's not uncommon but can you give us some insight as to why you are drawn to images without humans, animals, etc.?

My art training was in drawing the human figure and painting portraits, and I had decided to focus on painting portraits of people, starting with friends and family members. But I wanted to paint from life, not photos. One summer, during a family vacation on Lake Michigan I asked two of my granddaughters to sit for me so I could paint them. They agreed, but after five minutes of posing, they got edgy and quit. I looked out the window at the beautiful view of the lake and began my journey as a landscape painter. I painted the landscape for years before expanding to interiors and still-lifes.

I see the landscape, interior, and still-life motifs as stages where something has just happened or is about to happen. It’s the relationship among the objects that interests me – a dialog among players on a stage, you could say. Putting people in my paintings would change that entirely. It would be more difficult than anything I’ve done because a new set of challenges arise. Do I make the figures recognizable or not? A recognizable face is about someone with a name and identity, while a blurred face or turned head represents anyone and everyone. What are they to be doing, and what does that mean? I feel a tension between the painting having a message and the painting being its own message. I’ve experimented with putting figures in my quarantine paintings, so who knows where I will go? Painting never fails to teach me something new. 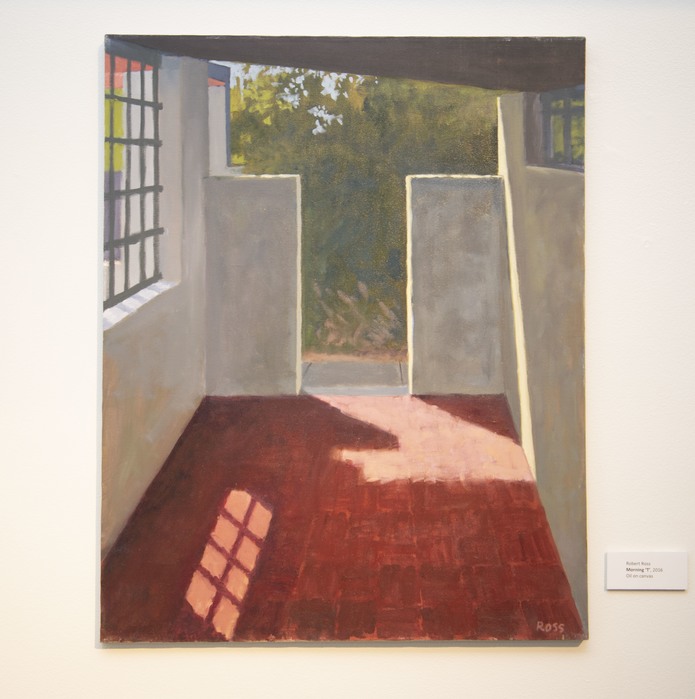 Where do you see your painting going in the future?  Any new direction you feel you might like to take your art?

As I mentioned, I’m exploring painting the human figure in different settings. I am also looking at the use of lines and drawn elements in my paintings. In all of this, the role of space is still an important concern.

The Covid-19 pandemic has changed the way I get public exposure for my art. Art festivals, public exhibits, and artist residencies have been canceled or put on hold. I’ve been exploring new ways of showing and selling my paintings. I’m still represented by two wonderful Florida galleries, Arts on Douglas, in New Smyrna Beach, and ARTicles Gallery, in St. Petersburg, but I’d be open to making a match with additional quality galleries. I’d also like to show my “quarantine paintings” in a museum or gallery that is considering that theme for upcoming exhibits.

You have been at McRae Art Studios in Orlando now for a number of years now. Tell us more about this art collective, please.

Six months before retiring to become a full-time painter I learned of a studio vacancy at McRae, applied immediately, and got in. It’s been a privilege to be part of a group of 22 talented and experienced artists. We all help each other with ideas, tips, criticism, and humor. We have studio open houses, an annual auction of small works, and we’re gearing up to create an online sales venue. http://mcraeartstudios.com/