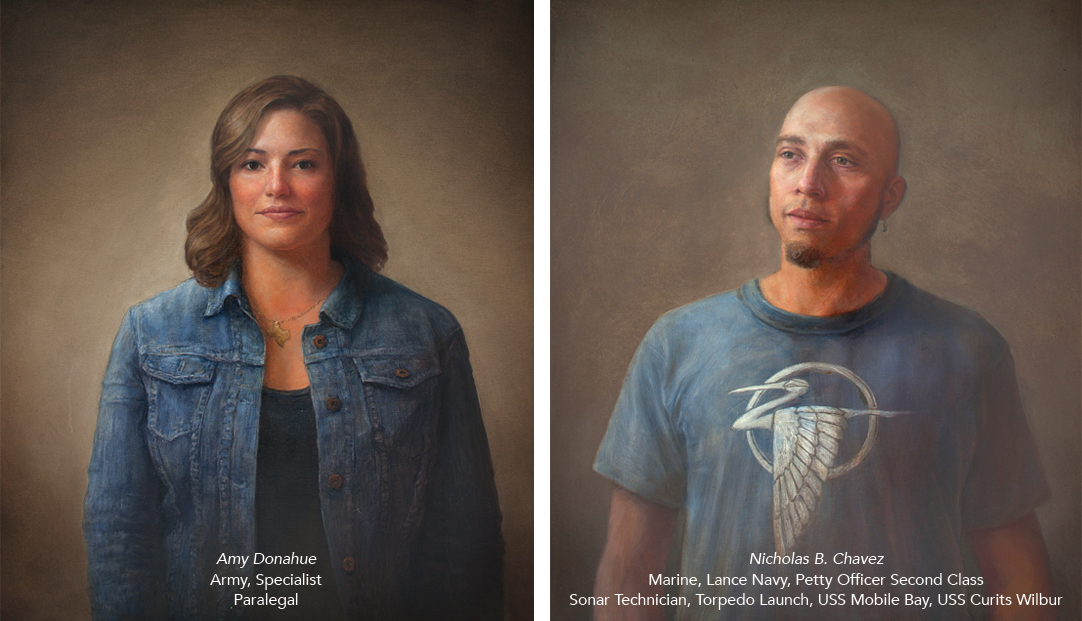 Witness the pride, sacrifice, and humanity of those who served in Iraq and Afghanistan through this traveling exhibition from the Smithsonian, featuring 100 oil portraits. Representing a cross-section of home states, military branches, jobs, and backgrounds, every portrait includes a candid first-hand account of war.

In 2005, an increasingly disturbing feeling of disconnection from recent war conflicts ignited a desire in artist Matt Mitchell to learn more about the American experience of those who served in Iraq and Afghanistan. At the time, he did not have any connection to the military. However, that changed after he read an article in a local newspaper about an Iraq veteran coming home. The story moved him profoundly. That's when he decided to call the parents of Jeffrey Michael Lucey, who would become the first individual he painted for 100 Faces of War. Lucey's portrait, along with 99 other portraits of and statements from those who served, are featured in the exhibition. Organized by the Smithsonian Institution Traveling Exhibition Service, it will be on view at the Museum of Arts & Sciences on September 1 through November 25, 2018.

For this article, we had the opportunity to interview Mitchell who offers us a glimpse at the concept behind this exhibition, and the veterans willing to share their personal experiences of war with him. 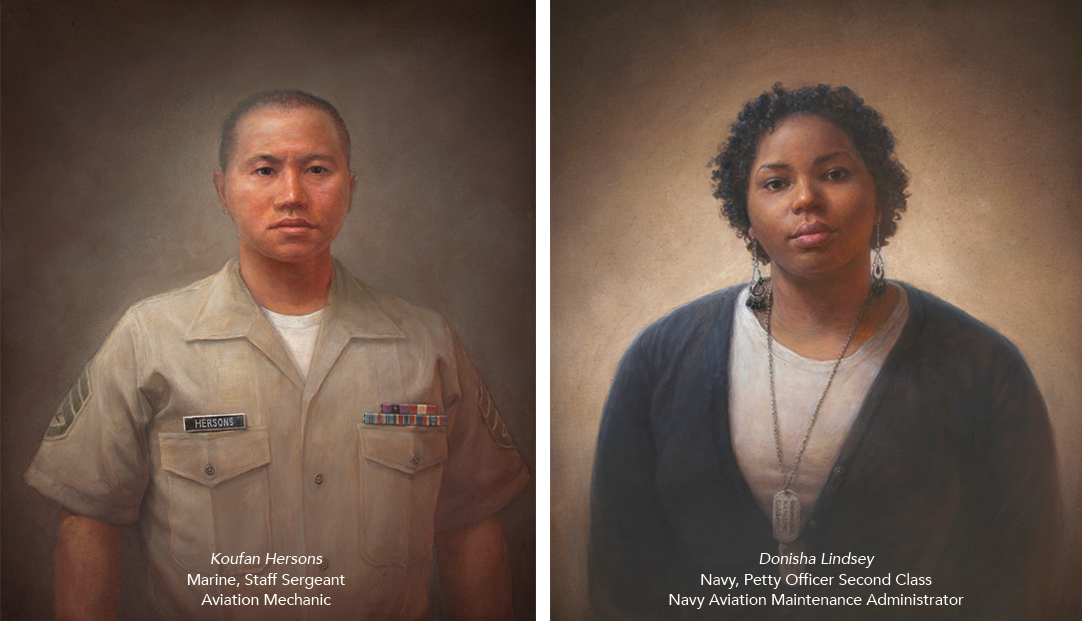 What motivated you to start this project?

I went to the town library to look through the records of the local papers to see if I could find articles of veterans returning. The stories about Jeff struck me. He had returned from Iraq and taken his own life a year later. I couldn't stop thinking about him. A the time, there was no public awareness of either PTSD or veteran's suicide. Jeff's parents were remarkable for wanting to talk about these things with the media. I was in a bit of a conundrum, became I believe it is important to meet someone in order to do his or her portrait. I resolved to meet with Jeff's parents to ask if they had any photos I could work off, and to try to talk with them in order to get a feel for who Jeff was. They were very gracious. We sat on their deck, and they told me stories about their son. It was a powerful experience, and obviously difficult for them. As I drove home, I resolved that I must do this project. You could say that was the true beginning of the work.

How did you decide on the format of the paintings for the exhibition?

When I first visualized it, I saw it as a room filled with the spirits of many people. It would have to be a massive quantity of work in terms of portraits in order to reflect the scale of the wars. I did not want the portraits to look like they were from some bygone era. Part of the feeling of modernity would be that each of them would be facing forward and placed in the frame in a casual way, like a snapshot. It also became important to line up all of their eyes at the same height and to show them all in the same light in order to project a sense of equality.

Why do you work at this scale?

I made the faces life-size, so the viewing of the portraits feels like a personal encounter. The dimension of the paintings was determined by how much of a person you generally see when stating at a conversational distance.

When talking about the American involvement in Iraq and Afghanistan we are talking about millions of people. It seemed vital to do a large number of work to reflect this. One hundred seemed like it would do the job. 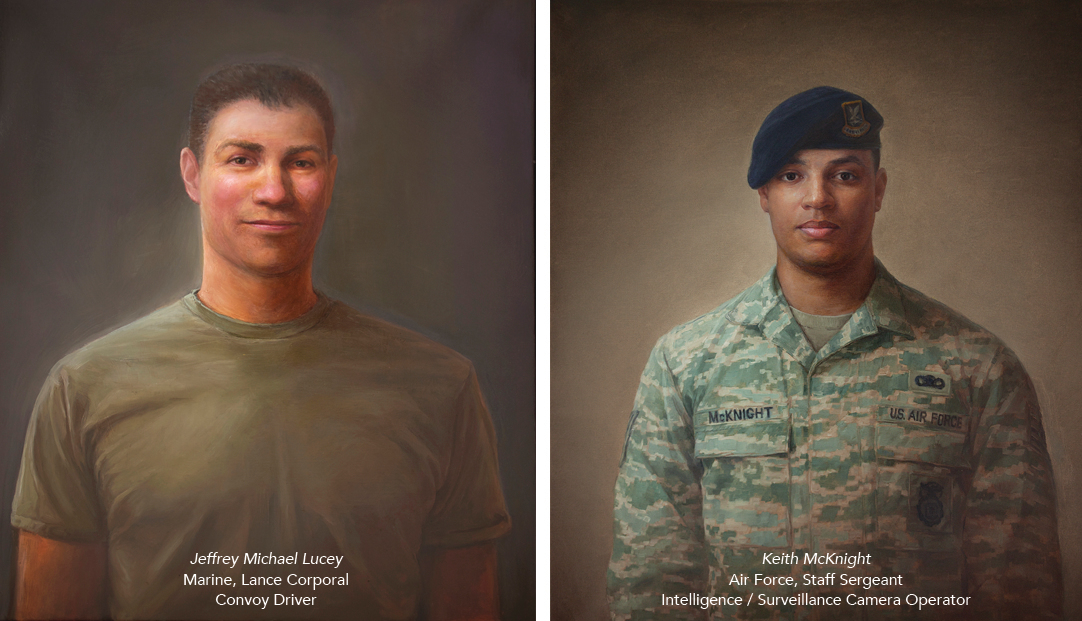 Are you still in close contact with the people you painted or the families of the fallen soldiers?

Yes, I have the fortune of still being in contact with many of the people I met on this journey. Painting a portrait, especially when you work from life, is a distinctive experience. Often we would talk as I painted them because I believe it is more important to know a person than to have them sit still in front of you. Sometimes the conversation flowed. Inevitably, it turned toward their time in the wars, yet it was in the context of making something. We were not talking politics. I was trying to represent them as a human being to the public through the arcane, intuitive means of putting brush to canvas. Facebook allows a lot of us to keep up with each other, and I have gotten to be friends with a couple of the people who live locally.

How as the process of conceptualizing this project?

It evolved slowly. First, I had the idea to do the large group of portraits. When doing the first portrait, I decided to include some words by each person (an idea encouraged by my wife). However, including writing from each of the portrait subjects made the project much more difficult. In order to show a balanced view of the wars, it became necessary to try to find a cross-section of those who served. I set out to do this entirely on my own, partly because I underestimated how complex the military was. As the years passed, I researched more the composition of the military in Iraq and Afghanistan. Yet it was challenging to come to a reasonable idea of a cross-section. The wars were in progress, and the information online was much more difficult to mind. After I had been working on the project for five years, I had the good fortune to meet Dan Burland, a sociologist of the military. He volunteered his time to help me make clear categories and to find the statistics I needed in order to make a better cross-section.

Can you tell us about the educational aspect of this exhibition?

While painting these portraits I learned a lot about the wars that does not necessarily come across in the portraits. There are many things about the make-up of the armed forces today that most people would find surprising. In addition, if you look closely at the biographical information for each portrait it is possible to see reflections of particular moments in history that are important to remember. As citizens, we are inextricably tied to our military, and it seems wise to know something about the way it works.

Do you think art is a tool to heal the traumas of war?

There is a great power in being part of a creative work, and there is something important about creating a symbolic thing with a sense of community. Some of the people I painted in my studio later told me that the experience made them feel like they had come home, even though they had been back in America for some time. For the 100 Faces of War exhibition, I was not the only one doing the work. Each of the participants had to decide what to say next to their portrait. This was very difficult for many of them to do, yet many remarked that it was a cathartic process. It is easy to imagine that these are just human tendencies and that people would benefit from them after any war. Trying to find some creative way to reintegrate into public life after war does seem like it would be universally important.

What is the greatest satisfaction you have achieved with this project, and what experience do you want visitors to take home?

Knowing that therapists at the U.S. Department of Veterans Affairs have used this exhibition to help veterans with PTSD is one of the greatest satisfactions.

I hope that veterans visiting the show feel like they can be heard. I want them to know that people can drop their politics for a moment and just listen, human to human. I hope that the civilian public leaves feeling that they have seen the human dimension of the American experience of war from the inside. For everyone, I hope that they feel the great breadth of the modern American experience of war, and the need to listen to many voices in order to understand such complex things in our society.

"100 Faces of War" is an exhibition organized for travel by the Smithsonian Institution Traveling Exhibition Service in collaboration with artist Matt Mitchell. All images: Copyright © 2005-2014, Matt Mitchell. All rights reserved. Local funding has been provided by the Florida Humanities Council with funds from the National Endowment for the Humanities. "100 Faces of War" is on display at the Museum of Arts & Sciences September 1 through November 25, 2018. For more information about programming related to this exhibition, visit the Upcoming Events Calendar at MOAS.org.