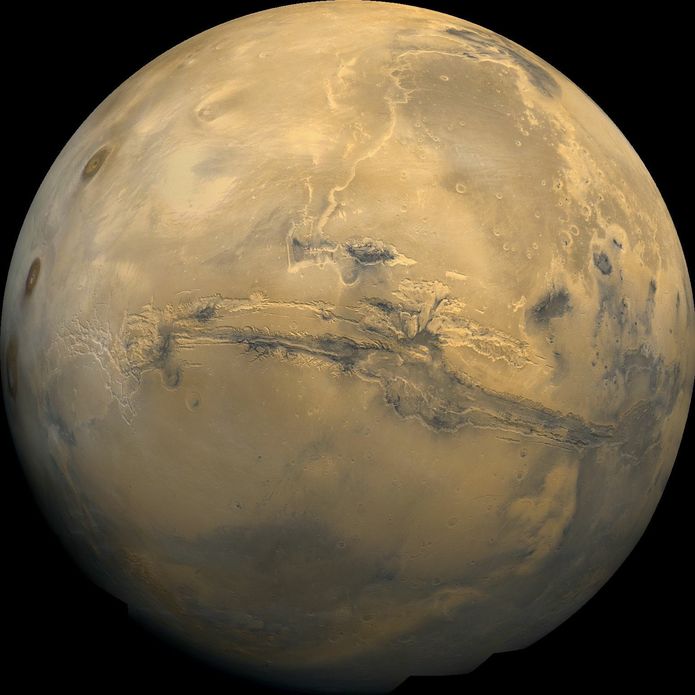 A special event will delight night sky observers this summer: the opposition of Mars. Opposition is sort of a fancy way of saying that Mars will be on the opposite side of the Earth from the Sun, so we will have an alignment of the three objects in space. Oppositions with Mars happen very regularly and frequently, about once every 2 years (or 780 Earth days to be exact).

Why is this significant though, since alignments in space happen all the time? With each opposition, we have our closest approach with Mars during our orbits, so it is the best viewing opportunity. Mars will be bigger and brighter in the sky than at any other time. To the casual observer, it may not be noticeably bigger, but the brightness will certainly grab attention from anyone that gazes towards the Red Planet. 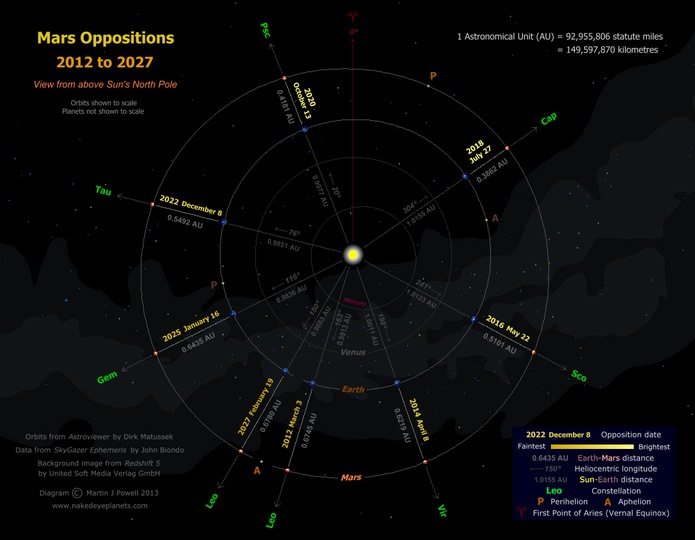 Mars in Opposition shows the Sun at the center of the solar system, and some past and future
oppositions between Earth and Mars. Image Credit: http://www.nakedeyeplanets.com

As you work your way through time in the above graphic, you may notice that each opposition with Mars varies in distance, shown here in astronomical units (au). One astronomical unit is defined as the average distance between the Earth and the Sun. This variation in distance is due to the way our planetary orbits work. Contrary to popular belief, orbits are not circular. As Johannes Kepler first presented in his 1609 work Astronomia nova, describing the Laws of Planetary Motion, all planetary orbits follow an ellipse (or oval). The measure of ellipticity is called orbital eccentricity. A value of 0.0 is equal to a perfect circle and a value of 1.0 is equal to a straight line. All planetary orbits therefore fall between zero and one on this scale. Earth has a very close-to-circular orbital eccentricity of 0.0167, while Mars has a more squashed-circle eccentricity of 0.0934. The highly circular and stable orbit of Earth is one of the many reasons that life has been able to thrive on our planet. For further thinking: what is ‘Oumuamua and what does its 1.20 eccentricity value indicate? 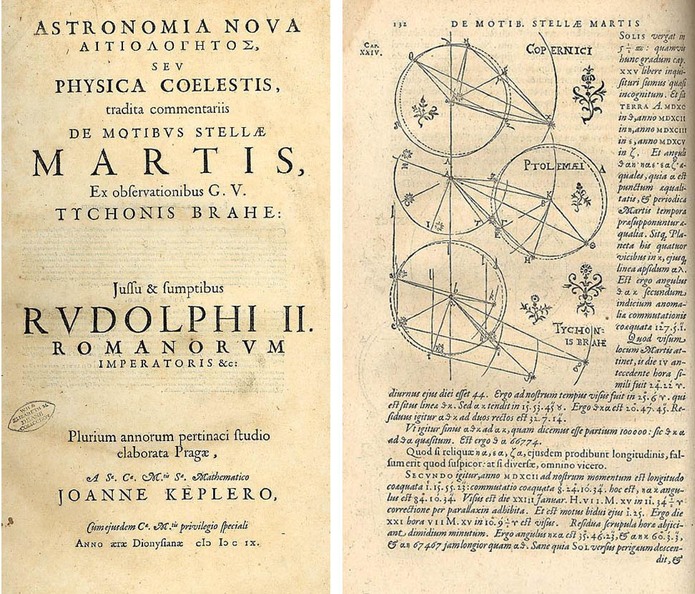 Because of Mars’ stretched out orbit, it will swing out farther from the Sun at times, and then closer, rather than the highly stable distance from the Sun like we have here on Earth. At certain points, then, the distance during oppositions can be longer than average; at other times, shorter. When this closeness of Mars with the Sun coincides with Earth being in the same vicinity, we then have one of these unusually close oppositions. The trend for the past few oppositions has our minimum distance from Mars decreasing. It turns out that the opposition for this summer will be the second closest approach with Mars in the past 60,000 years!

Of course, we can not talk about Mars’ opposition without also addressing the dredded Mars Hoax that continues to vex astronomers. This is the woefully ridiculous myth that Mars will appear as large as the Moon, first perpetuated from a misinterpretation of an email describing the 2003 Mars opposition. Since everything in the internet lasts forever, scientists have to fend off the erroneous information every two years since then. For the record, Mars will never appear to the naked eye to be the same size as our Moon. It’s physically impossible. The minimum distance between Earth and Mars will still be 0.3862 au (or 35,899,533 miles). Mars will still appear as just a dot in the sky. A nice looking dot, but just a dot.

This 2003 opposition (the #1 closest in 60,000 years) will hold the record until the year 2287.  Since Mars is currently in a long term trend for increased eccentricity, the minimum distances between our two planets during oppositions will continue to decrease for the next 24,000 years. 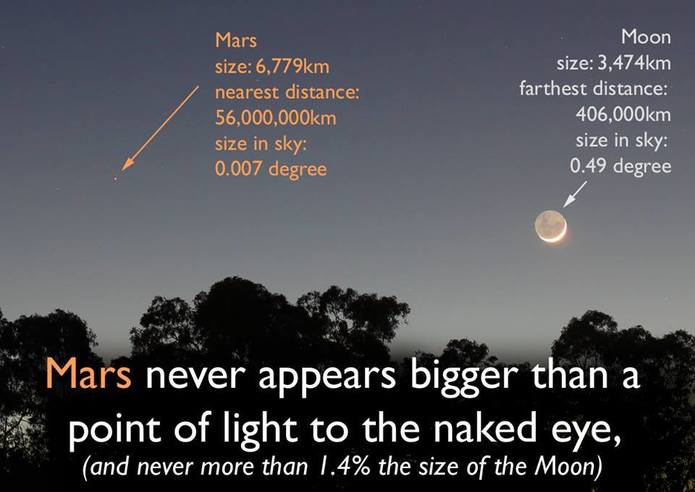 While currently of interest due to more opportune remote data collection of Mars or purely for the visual spectacle, Mars oppositions may take on a far more important role in humanity’s future. These would be the optimum times for travel between our two planets, with a voyage duration of only a few months. We will be able to sling supplies and people from our inside track on Earth to the slower, outside Martian orbit a few weeks prior to an opposition to take advantage of the relatively short distance to our next door neighbor. Every two years, it may be time to vacation on Mars!

On the night of July 27th, 2018, we won’t just have Mars, though. We will be spoiled with planets. Venus, Jupiter, and Saturn will arc across the ecliptic plane with Mars, all visible to the naked eye at the same time! Uranus and Neptune will both be visible by telescope later in the night. It doesn't stop there, either. A full Moon will also feature, right next to Mars. 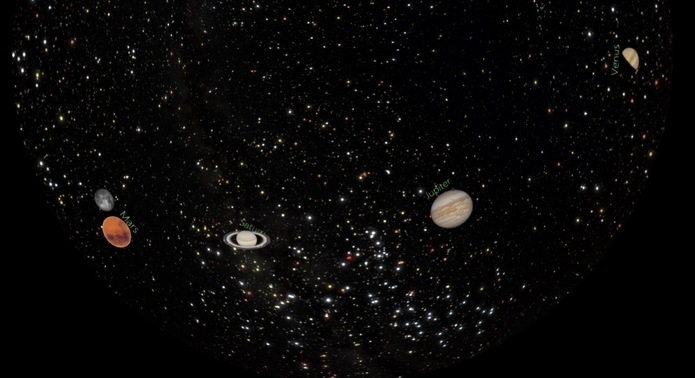 The night sky of July 27, 2018, just after sunset.  Planets greatly enlarged for emphasis.

The MOAS Planetarium will be hosting a planet-gazing party on July 27th.  Weather permitting, we’ll have telescopes ready to give an even closer view of Mars, Venus, Jupiter and Saturn, as well as a full Moon.