Romanticism to Abstraction: Florida Landscapes in the Brown Collection through the Lens of European Art

The Cici and Hyatt Brown collection of Florida art contain fine works by important 19th and 20th Century American and European artists alike. Iconic names in American art such as Louis Comfort Tiffany, Thomas Hart Benton, and N.C. Wyeth represents some of the leading movements during those centuries, including American Impressionism and Regionalist art depicting rural and small-town America circa 1930. Just as strong, however, are the many key examples of works in the collection reflecting the predominant art movements in Europe throughout the 19th and 20th centuries.

For example, George Loring Brown’s Midnight on the Okefenokee Swamp, 1866 exhibits all the drama and mystery favored by the European Romantic painters of the day. Focused on producing a heightened emotional response from the viewer, Romanticism dominated the first half of the 19th century and swept all aspects of the arts including literature, theater, music, and the visual arts. In reaction to the calm, orderly, and rational symmetry of Neo-Classicism, Romanticism sought to stir the emotions through agitated, dramatic narrative scenes or, in the case of landscape painting – dramatic angles, lighting, and ominous shadows – all designed to stir the emotions. G.L. Brown’s Midnight on the Okefenokee Swamp, 1866 is a classic example of European Romanticism brought to the States in the form of a mysteriously moonlit stream within a forested swamp. The bright full moon shines down on a craggy, old rotten tree that dominates the center of the composition and appears eerily human-like as it strains toward the moon with its two Spanish moss covered, arm-like limbs. A smaller tree stump underneath, mirrors the angle of the larger tree, creating the impression of two figures drawn by the pull of a supernatural moon – a séance in the forest. 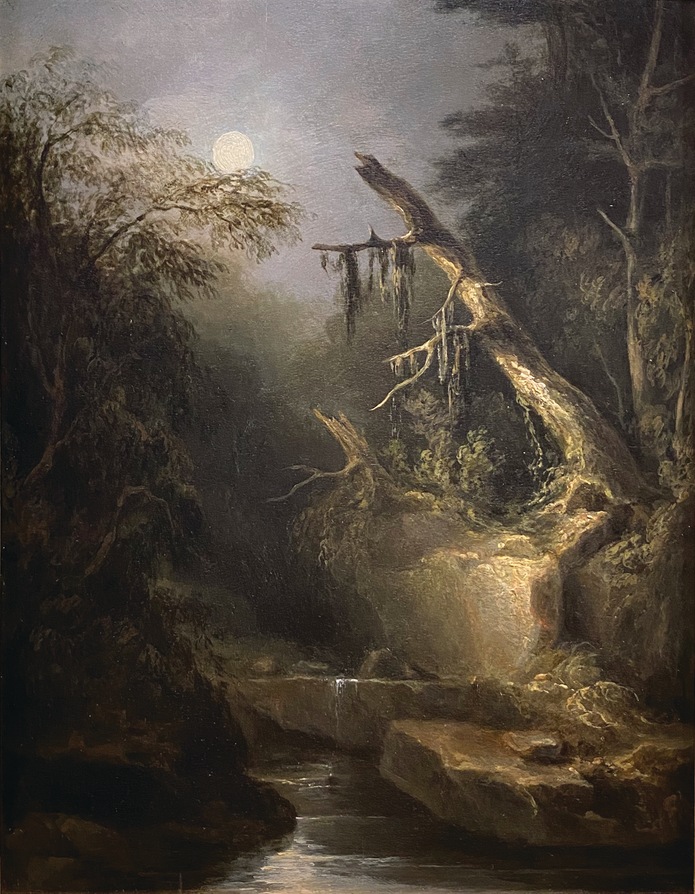 Other prominent artists in the collection representing the legacy of European Romanticism include Herman Herzog and Martin Johnson Heade. Born in Bremen, Germany, Herzog was originally drawn to the natural splendor of the mountains and the German terrain. The sublime and untamed elements of the wilderness became a significant driving force behind his decision to pursue landscape painting. Once transplanted to the U.S. and, eventually to Florida, he focused his reverent eye on the lush landscape of the state’s interiors. While appearing literal and almost photographic at first glance, one realizes the awe the painter felt for these tropical scenes in works such as The Fox, Near Gainesville, ca. 1880 where the towering palms dwarf the tiny fox and bird flying through the center of the composition. The tops of the trees are cut off in the painting, implying that they are even taller and most majestic than rendered here. The viewer’s vantage point is at the level of the frightened fox at the bottom of the composition, and we are reminded of the power of nature as they these long trees tower above us and the dense underbrush seems to teem with life. 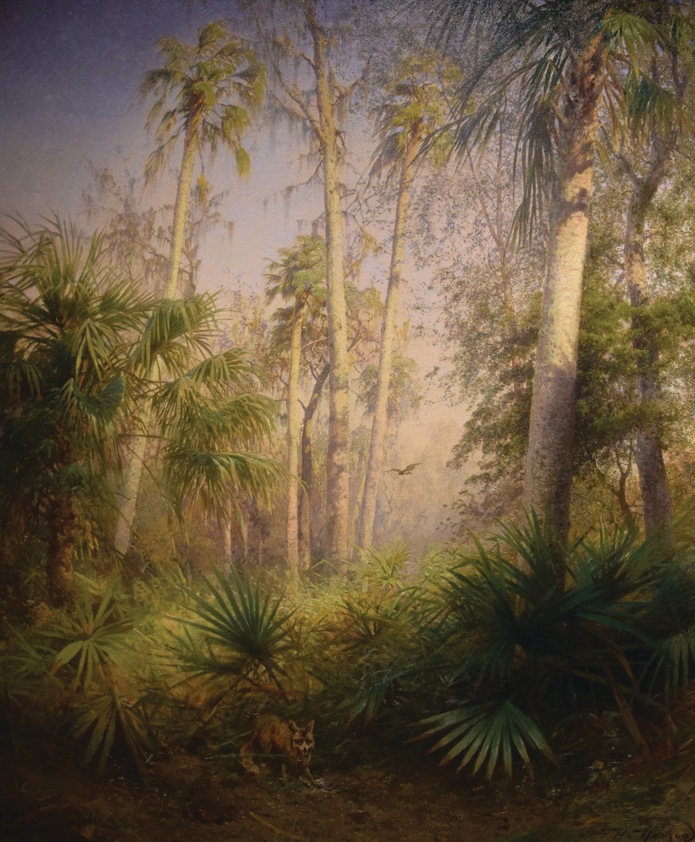 Martin Johnson Heade, one of the most renowned painters in the Brown collection, has a very interesting connection to European Romanticism. Born in rural Pennsylvania, he traveled to Europe in the 1840s and then returned to the Eastern United States to become associated with the Hudson River School of American landscape painters. In 1883, Henry Flagler took an interest in his work and brought him to St. Augustine where he became a crucial member of a small artist colony.

One of the hallmarks of Heade’s style is his compositional preference for far off views of long, horizontal panoramic scenes with a prominent horizon line cutting across the middle with clouds and sunsets clustered along this center line. In his preference for this type of view, he is very similar to the great German Romantic painter, Caspar David Friedrich. Friedrich became famous for mountain top vistas in which the view seemed to stretch off into infinity. One of the greatest artists of his era, his works were interpreted as representing the metaphysical through sublime nature. He, too, focused his compositions on a strong far off horizon line so that the viewer was awed by the great expanse of space spread out in front of his/her viewpoint. Although from different hemispheres and certainly different climates, both Friedrich and Heade shared a desire to represent the timeless solitude and awe-inspiring quality of the natural world, a signature of Romanticism. 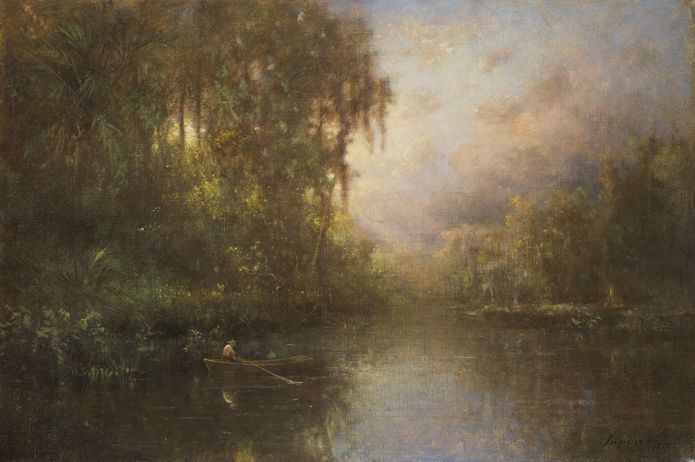 One of the most prominent European schools of landscape painting during the Romantic period was the Barbizon School in France. Settled in the village of Barbizon near Paris, a group of young painters looked to the forest of Fontainebleau for inspiration. They trained their eyes on the many shades of deep green contrasting with bright sunshine or atmospheric conditions that gave the views Romantic qualities. Appealing to the emotions rather than intellect, the Barbizon School painters led by Theodor Rousseau, Francois Millet, and Rosa Bonheur, created poetic landscapes that celebrated rural life over the rapid industrialization of France’s major cities. George Inness, Sr. visited France in the 1850s and was strongly influenced by the Barbizon painters. He was inspired by their idea of a divine significance in nature but was also drawn to the fresh, loose brushwork and overt emotional tenor of their paintings. These aspects would become synonymous with his distinctively atmospheric landscapes. This is a quality he passed on in teaching his son. Fishing Near Tarpon Springs, 1917, by George Inness, Jr. in the Brown collection reflects the (by-now) renowned style of Inness Sr. as filtered through French-Romantic Barbizon painting. 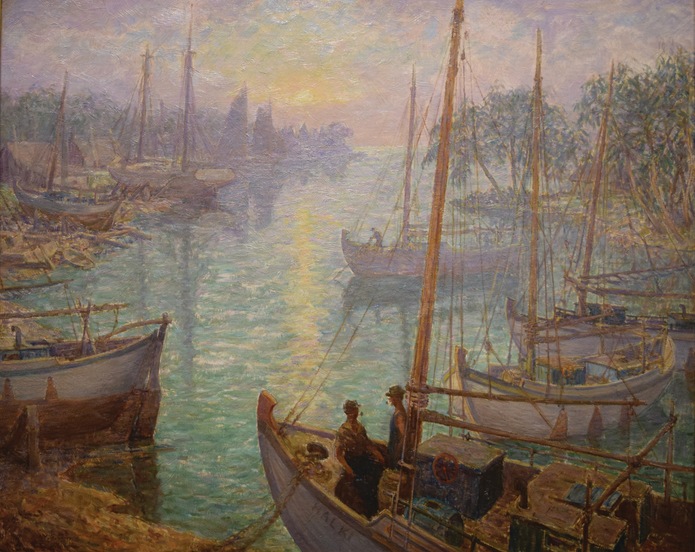 Late 19th century French Impressionism has a far-reaching impact on the arts. The notion that an artist should attempt to capture a fleeting moment as optically correct as possible was an idea that turned the European artistic tradition on its head. The first French Impressionist exhibition took place from April 15, 1874, to May 15, 1874, and contained works by Claude Monet, Edgar Degas, Pierre-Auguste Renoir, Camille Pissarro, and Berthe Morisot. They called themselves the Anonymous Society of Painters, Sculptors, Engravers, etc. but critics soon called them “Impressionists” after a painting by Monet in the show. Their paintings were derided by critics as “unfinished sketches.” It took some time but eventually, this radical new style became fashionable and American artists such as Frederic Car Frieseke brought it to the United States. Frieseke met Monet after a move to Giverny in 1906, and the Florida scenes in the Brown collection that he painted in the 1920s show a great debt to the French master. Their light pastel tones, hazy atmosphere, and broad, loose brushwork are Impressionism at its best. Other fine Impressionist examples in the collection include Charles Warren Eaton’s Early Morning on the St. Johns River, 1900 and Winfield Scott Clime’s Tarpon Springs, ca. 1930. 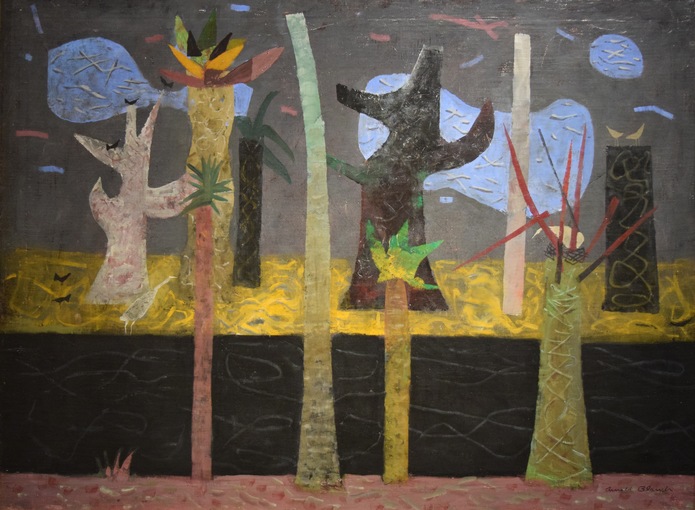 While most of the landscape paintings in the Brown collection reflect 19th-century European influences, a few notable examples bring it squarely into 20th century Modernism. Arnold Blanch’s Florida River, ca. 1955 Hilton Leeche’s Preview, ca. 1940 and several rural Florida scenes by Jules Andre Smith show elements of Abstraction. These were the dominant artistic movements during the period of the two World Wars and immediately after. Gradually the movement from Impressionism onward was a dissolution of form trending ever more abstract. Arnold Blanch’s Florida River, ca. 1955 is a prime example of compositional elements in a painting reduced to basic geometric shapes.

Landscape painting throughout the ages has always reflected the prevailing styles and tastes of the many artistic movements that have shaped the development of western art. The many fine Florida landscapes in the Brown collection show that the influence of European art stretched far from the continent, helped inform artistic visions of this new, exotic terrain.