After the devastation of the Second Seminole War, the remaining members of this proud group of people decided Florida was their home and refused to relocate to the Oklahoma reservations. The Seminoles that live in the Everglades today are the descendants of those unconquered souls.

Begining in 1835, the United States Army and its best general attempted to dislodge the Seminoles from their Florida sanctuary. One by one, the highly-touted generals left the new territory defeated. Noted generals like Winfield Scott, Zachary Taylor, and Thomas Jessup could not compete with the guerrilla warfare tactics waged by the Seminole warriors. Seven long years and 40 million dollars later, the Florida War eventually fizzled out with no surrender or treaty. Relative to today, the war would have cost nearly a half billion dollars to defeat approximately 2,000 warriors.

The guerilla warfare, unfamiliar terrain, confused leadership, and the unpopularity of the war with the public foreshadowed another war 140 years later in Southeast Asia. It was the last major Indian war east of the Mississippi River with both sides determined to stand their ground. For the Creek and Seminole Indians, they would feel the wrath of "Old Hickory" Andrew Jackson for years to come. The Seminoles called Andrew Jackson "Sharp Knife" and as President, he helped pass legislation in 1830 that would ignite the Florida frontier on fire with the Indian Removal Act of 1830. This decreed that the Florida problem, the Seminoles, were to be removed by force.

Yet, one man who was not a Seminole, nor a Floridian, would rally the Seminoles to stay and fight for their Florida sanctuary. The name Robert Powell might not ring a bell, but when he shed his Anglo name he took on the name of "Osceola" that would make him forever would-famous. His father was a Scotts-Irishman and his mother was a full-blooded Creek Native and were both born in Northern Alabama on the Tallapoosa River. He and his family were forced to seek refuge in Florida as "Old Sharp Knife," General Andrew Jackson, defeated the Creek Indians at the Battle of Horseshoe Bend during the War of 1812. The Creek Indians already living in Florida had been filtering down into the north part of the peninsula since the 1750s. The Spanish authorities called the Creeks living in their colony "Seminoles," or Renegades.

After seeking refuge in North Florida, Robert Powell's village was defeated again by General Jackson on Lake Miccosukee near present-day Tallahassee. Historians have dubbed this a major defeat and part of the First Seminole War. Powell and his mother were on the move south again as refugees fled to the Tampa area. It was there that he became a man and shed his Anglo name for Osceola, "The Black Drink Singer." His kin gave him that name because of his consumption of a noxious ceremonial tea made from the yaupon holly tree.

In Florida, the Seminoles were an amalgam of native peoples of Alabama, Georgia, and South Carolina numbering no more than 5,000 souls. To the United States government, the Seminoles were always in the way of land-hungry pioneer people looking for cheap land. The other taboo issue involving the Seminole people were runaway African slaves escaping southern plantations. Slaves were fleeding to the sanctuary of Florida where Seminoles welcomed them with open arms. Living amongst the Seminoles, they too had a great stake in keeping the Americans out. Border raids by both Seminoles and Americans attributed to a stewing pot of hostility.

A series of fraudulent treaties perpetrated on the Seminoles infuriated the war leader Osceola. By the outbreak of war his influence had grown significantly. He would become the leader of this resistance and a convincing voice of the Seminoles to stay and fight. Osceola, the great war chief, planned two-prong opening salvo for the United States which ignited the Second Seminole War and the Florida frontier. The fist was the killing of American Indian, Agent Wiley Thompson near Fort King (present-day Ocala) and the second was ordering the ambush of Major Francis Dade's Brigade near Brooksville. All but one of the 110 soldiers in Dade's brigade survived to tell the tale. This act of war led to the American Army invasion of the Florida Territory. After a series of long statlemates throughout the peninsula, the United States became desperate and engaged a more radical strategy.

In the spring of 1837, under a white flag of truce, General Joseph Hernandez captured Osceola near St. Augustine. General Hernandez, a plantation owner from Flagler County and leader of the Florida Militia, was under orders from his superior General Thomas Jessup to seize the war leader. Osceola was surrounded and taken into custody. Despite suffering from Malaria, he was paraded through the streets of St. Augustine and then imprisoned in Ft. Marion. General Jessup would later resign his commission as a result of the scandalous capture under a false truce. Osceola was transferred from Ft. Marion to Ft. Moultrie, South Carolina. There the famous Native American portrait artist, George Catlin captured the ailing war chief's image on canvas. After three months of imprisonment, despite support from the American people and press, Osceola died at the age of 34.

One of hte most interesting watercolors is a painting titled, Seminole Family Going on a Visit, 1955 by Fred Beaver (1911-1980). Beaver sets a scene deep in the middle of a cypress swamp showing a very stylized image of Seminole culture. Beaver was a prominent Muscogee Creek-Seminole painter and muralist from Oklahoma. He became an all-state football and basketball star player in high school and was primarily a self-taught artist. He became the first "Master Artist" named by the Five Civilized Tribes from the original Oklahoma Territory. In this painting, he shows a Seminole family leaving in a dugout canoe in formal clothing. Beaver depicts them just as their departure begins leaving their encampment behind in the background. The tall, leafless cypress trees that line the waterway have an ominous feel and the geometric machine-like look gives vertical perspective to the piece. No doubt his style has an art deco flavor which makes his paintings so unique and unusual. Intense colors and great attention to detail are wy this painting has won several awards and confirms his status as a master artist. 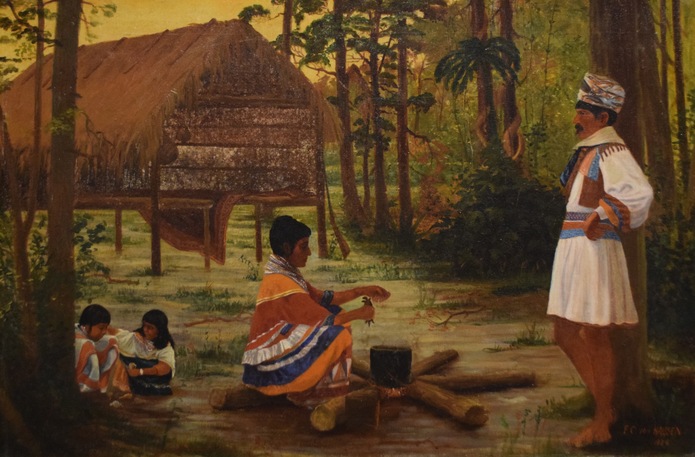 Another great painting depicting Seminole culture is titled, Seminole Indian Family, 1926 by Frank C. von Hausen (1994-1974). Hausen was born in Dresden, Germany and studied at the prestigious Vienna Royal Academy. As World War I erupted he made his way to the United States. After a few years of painting out of his studio in Maine, he moved to balmy Plam Beach in the early 1920s. He was a prolific painter and was known to paint realistic portraits of notables such as Henry Flagler, Thomas Edison, and Addison Mizner.

The Seminole Indian family paintings show Hausen's great skill not only as a portrait artist but also his ability to deliver an excellent landscape behind his subjects. Formal Seminole atire and a family going about its daily life give us a glimpse of traditional life in the Everglades. Vibrant colors, attention to detail, and the tone of a setting sun romanticize the image. Von Hausen also includes the amazing Chickee Hut which is still prominent throughout Seminole culture and South Florida today. Chickee Hut were homes raised on a platform above any potential flood waters. It was a structure that could be constructed in a day out of cypress logs and thatched with saw palmetto fronds. Growing up in South Florida, I spent many summers as a youth thatching Chickees and am quite familiar with the surprising strenth of the structure.

In the permanent gallery is a portait called Seminole Medicine Man, 1953, an oil on canvas by Charles John Hasz (1895-1984). Here, a noble medicine man is shown in a sitting position wearing traditional clothing with a classic red bandana around his neck. High bright yellow attire contrasts with his dark sun-weathered skin. His face showns a man who over the years played a vital role among his people. His medicine man would have employed roots, herbs, animal parts, and other ingredients of nature to treat a variety of physical and mental disorders. Traditional chants and other customs, unexplained outside of the Sminole tribe, can also be important parts of the medicine man's technique. Hasz paints very little background to ensure that the viewer is focused on his subjects. Charles Hasz was born in Hungry and came to the United States in 1905. Living in the Cincinnati, Ohio area he moved to Broward County sometime before 1943. Once in South Florida, Hasz became infactuated with the Seminoles, painting many portaits and studies of Indians who lived close to his home.

The Seminoles are a tough and rugged group who survived many harships over their 250-year presence in Florida and deliver a story of survival and success. Their culutre is remarkable and still endures today. They ahve proven to be successful at adapting to new circumstances while still preserving important aspects of their culture. The next time you are at the Cici and Hyatt Brown Museum of Art, take time to reflect on the images of the Seminoles that are caught on canvas. Let this amazing collection be your window back in time to reveal the important interactions of people and their environment.

Explore more Seminole history and art in The Seminole and the Everglades exhibit in the France Family Gallery within the Cici and Hyatt Brown Museum of Art at MOAS.