By James “Zach” Zacharias Senior Curator of Education and History

One of the most important movements in furniture design was the Empire-style that flourished in Europe between 1800 and 1820. It developed during the reign of Emperor Napoleon I, as the vision of two French architects, Charles Percier and Pierre Fontaine. They studied in Rome, and thus were familiar with the classic world. As they collaborated, they resurrected a neoclassical style in the decorative arts.  Commissions from Napoleon and other European statesmen brought an aesthetic that replaced the busy Rococo style with one harking back to the glory of ancient Rome. 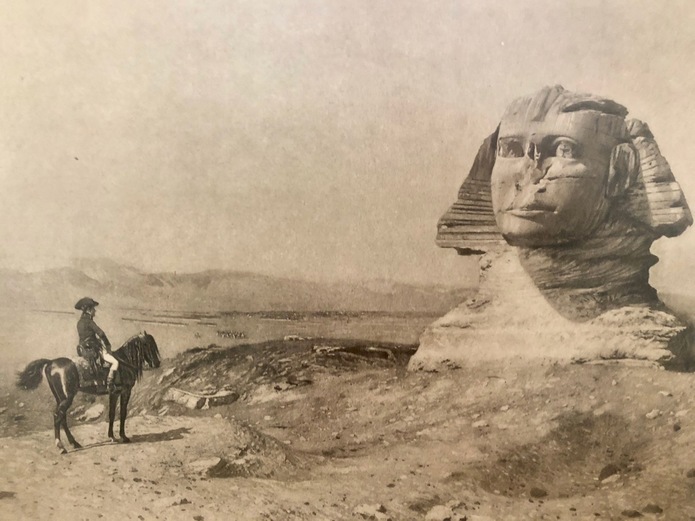 19th Century Etching by J.L. Gerome, Napoleon at the Sphinx

Empire style derives its name because of its association with the Napoleonic period. It was used as a propaganda tool to promote the power of Napoleon’s empire. It had an imposing character because it was meant to impress. Common features include large and austere geometric forms, paw feet, stenciling, brass, crisp carvings and columns. Mahogany from Cuba and the Antilles replaced precious woods previously used in Europe.

In the Dow Gallery of American Art at the Museum of Arts & Sciences, there is an amazing piece of Empire-style furniture- a wardrobe c. 1840 created by renowned French cabinet-maker Anthony Quervelle. He was born in Paris in 1789 and came to the United States in 1817 after the fall of the Napoleonic Empire. Not much is known about his early life but he probably came from a family of cabinet-makers. He settled in Philadelphia and opened a showroom showcasing his French-inspired Empire–style furniture which was very fashionable at the time. His showroom made him enough money to invest in real estate, and he was a very wealthy man by 1830. In fact, in 1829, when Andrew Jackson furnished the East Room of the White House, he commissioned a number of tables from Quervelle, five of which are known to survive to this day. 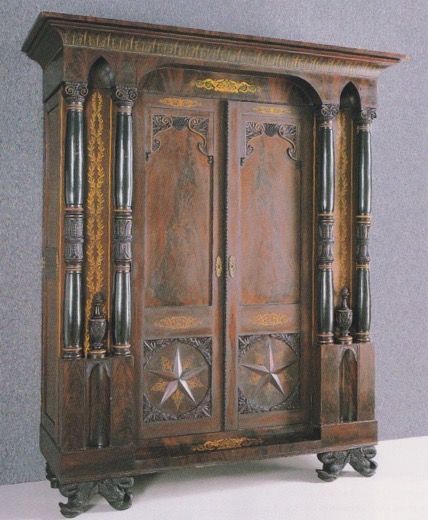 Quervelle is credited with popularizing the Empire-style on America’s eastern seaboard. In America, free from the trade guilds and rules in Europe, he perfected his own impressive Empire forms. Many of these traits can be observed in the wardrobe on display at the Museum. The double-door mahogany wardrobe is a one-of-a-kind commissioned piece and is considered one of his grandest and most impressive pieces. Fully carved with dolphin feet and gilt painted vines, this wardrobe is fully fitted with banks of drawers and closet units.

Quervelle became a United States citizen in 1823 and spent his life working in Philadelphia until his death in 1856. The inventory of his household furnishings, filed at the Philadelphia city hall the time of his death, lists several engraved portraits of Napoleon. This suggests that Quervelle’s style may have been based on a long-lived admiration for Napoleon that the Empire-style is named for.