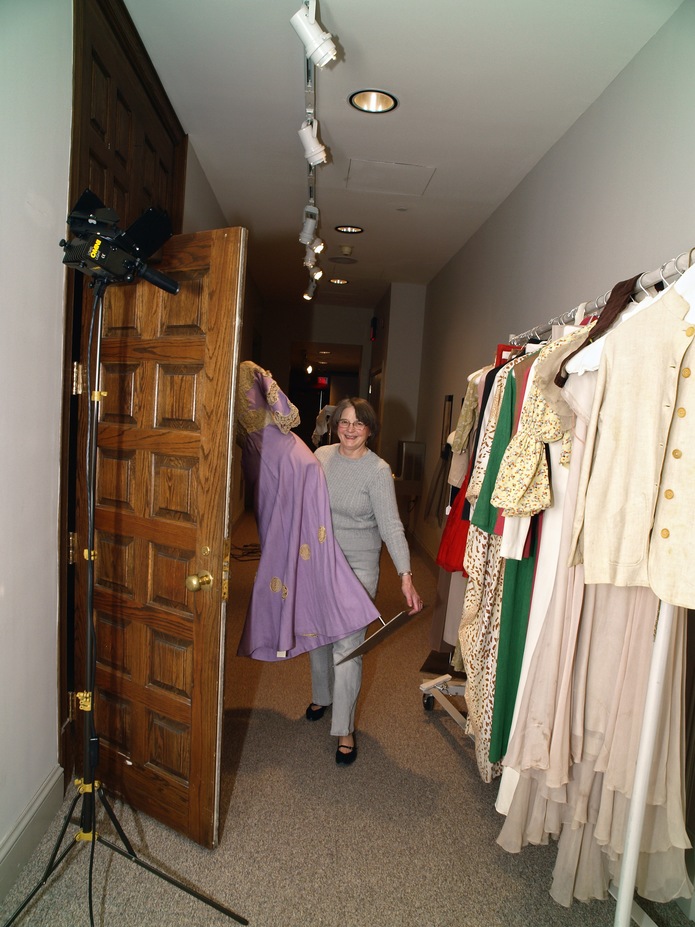 Recently retired, Jean Lawrence Druesedow was director of the Kent State University Museum form 1993-2018. She was previously Associate Curator in Charge of the Costume Institute of the Metropolitan Museum of Art, New York (1984-1992). She holds bachelor's and master's degrees in Speech and Theatre Arts from Indiana University and taught public speaking and costume design for the theater at Miami University, Oxford, Ohio, and Eastern Kentucky University, Richmond, Kentucky; speech for the University of Maryland European and Mediterranean Divisions, coordinated and taught the graduate Costume Studies program offered by the Costume Institute in cooperation with New York University (1978-1992) as well as Curatorial Problems for the Fashion Institute of Technology in New York (1992). She served as curator or organizer for more than 40 exhibitions, lectured widely, and contributed to publications in the field of costume studies.

In anticipation of receiving the exhibit, Katharine Hepburn: Dressed for Stage and Screen, from Kent State University in December, we took the opportunity to interview Ms. Druesedow about how Kent State University came to acquire the collection and Hepburn's role in the development of women's fashion in the 20th century.

How did Kent State University Museum come to focus on collecting and exhibiting costumes?

How did it come to acquire the Katharine Hepburn collection?

Miss Hepburn told her executors that her personal collection of her performance clothes should be given to an educational institution. After an extensive search, up and down both coasts they discovered the Kent State University Museum (KSUM). Initially, Gladys Toulis, the first director of Kent's Fashion School, knew a friend of one of the executors. Gladys wrote to me to ask if we would be interested. Over the next two years I was in contact with the Estate and ultimately, they decided to place the collection at Kent State. 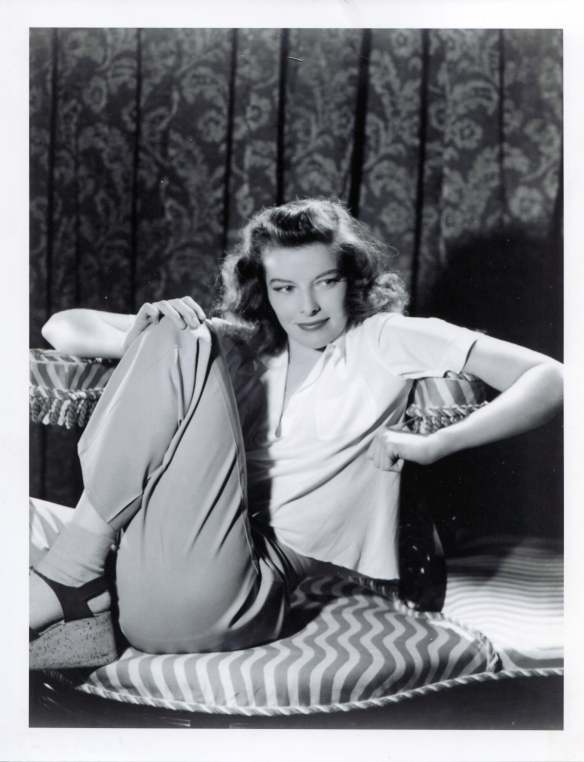 Can you explore a little of Hepburn's importance regarding the development of women's fashion in the 20th century?

Katharine Hepburn was both down to earth and comfortable in slacks and shirts and glamorous on and off the screen wearing gowns by the finest designers in both Hollywood and New York. In the 1930s, the other celebrities who wore slacks were not native-born - Katharine Hepburn was born in Connecticut - and as a result, they were less influential with the general population. Women going to the movies during the Depression looked at Hepburn and saw an "all-American" girl, both glamorous and wearing slacks. It has been my experience with the exhibition, that women of a certain age look at the slacks on display and realize that without Hepburn's influence in the 1930s and 1940s, we would not be wearing slacks as ubiquitously as we do today.

What do you think about the most important pieces in the exhibition and why?

The visitors to the exhibition are fascinated by Hepburn's physical shape: 5' 7 1/2" tall, with a waist that started at 18" and gradually expanded during her long life to about 30" in her 80s. The black evening gown from Adam's Rib (featured right), designed by Walter Plunkett, attracts the most attention because it demonstrates how very slender she was. However, I think that the most important gowns are those designed by New York couturier Valentina for The Philadelphia Story and Without Love, and the gown from Stage Door designed by Muriel King. These three pieces are extraordinary examples of the high fashion of the time. People went to the theatre to see high fashion just as they went to the movies to see fashion. Hepburn patronized both Valentina and King for her personal wardrobe. Both Valentina and Muriel King were important New York couturiers in the 1930s and 40s, and their extant work is quite rare. 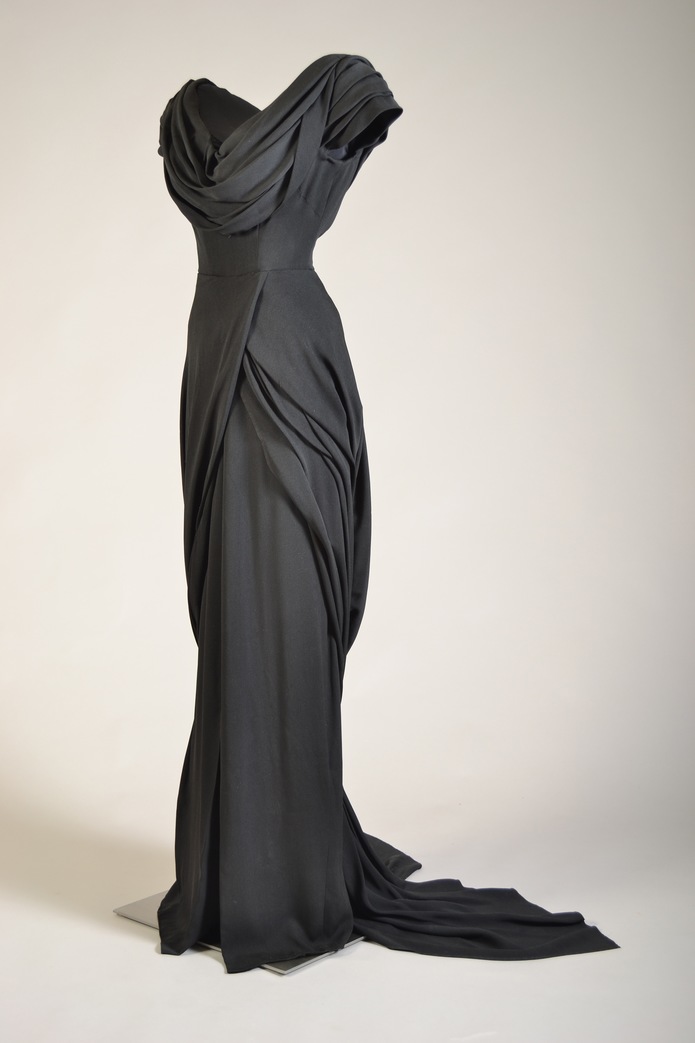 During the process of curating the collection and developing it into an exhibition did you feel you gained a certain insight into the personaility of Miss. Hepburn?

I have spent a good deal of the last nine years thinking and reading about Katharine Hepburn's clothes. I believe that she knew a great deal about how she wanted to be perceived by the public, what clothes would accomplish her public image, and what clothes would be right for her in any given role in theatre or film. She was especially concerned with clothes that would provide authenticity for the characters she played. For example, in the 1974 version of The Glass Menagerie, there is a stage direction that says that "Amanda," Hepburn's character, should go to her trunk and pull out gowns that she wore thirty years before. Hepburn went to her closet and pulled the wedding dress from The Philadelphia Story dress and "Laura," her daughter in the scene wore the Stage Door dress. In another instance, she felt that Cecil Beaton, the designer for the Broadway musical Coco, would not capture Chanel's elegant simplicity, so when the producers took her to Paris to meet Coco Chanel, she purchased two ensembles, one black and one white, with her own money ($10,000), to wear in the musical. In fact, she only wore the black one, but it is the one in the exhibition and the one in her self-portrait as "Coco."

Now a little about yourself. You have just retired from KSUM after a long and distinguished career there. How did you come to a career as curator of costume and then director of an institution devoted to collecting and exhibiting costume?

My first career was as a theatrical costume designer in the education theatre - I taught at Miami University in Oxford, Ohio, and at Eastern Kentucky University in Richmond, Kentucky, During my years in Kentucky, I took a tour of the fashion industry so that I would be better informed when I had fashion students in my costume design class. The second stop on the tour was the Costume Institute at the Metropolitan Museum of Art. At the end of the tour, the group was introduced to Master Restorer, Elizabeth Lawrence, who took volunteers in the restoration workshop. I did not have a summer theatre job and seeing authentic period garments in the Costume Institute storage had been cathartic: for years I had taught the history of costume from slides and photographs, but never really looked at the real thing. So, I managed to get an acting job in a Bicentennial pageant on Wall Stree, designed by a former student who also provided housing for me, and so every day, after the noontime performances, I got on the subway and went up to the Costume Institute to volunteer. I volunteered there every academic vacation for the next two years, and in 1978 they asked me to join the staff. I was at the Costume Institute for 134 years, ending my tenure as Associate Curator-in-Charge of the department. During the mid-1980s, as Shannon Rodgers and Jerry Silverman were planning the Kent State University Museum, my boss, Stella Blum, helped with the planning and ultimately became the first director. At that time, I took several Kent State University officials through the department. When my turn to need a job came, it coincided with an ad for the position at Kent State. I applied and spent 25 very happy and productive years at the KSUM.

What do you consider the highlights of your years at KSUM?

I think that the highlight of the time at the KSUM was working with the excellent museum staff and having the support of the university. This allowed us to do innovative exhibitions that appealed to students and to the public, and to enhance the reputation of the Museum nationally and internationally.

What do you consider the greatest rewards in bringing costume exhibitions to the public?

We all wear clothes, and most of the time we take our clothes for granted. Rarely do we consider what they say about us, why we choose the clothes we do, why we dress as we do each morning. Costume exhibitions provide important access to understanding both current life and historic times. Visitors to costumes exhibitions have an immediate reaction to the clothes they see - "Oh, I'd love to wear that!" or "Oh, I'd HATE to wear that," and they are often surprised at the context of both historic and contemporary fashion. I have long considered KSU Museum to be a cultural gateway to the intellectual life of the university. Costume exhibitions enhance our understanding of different people in different times and places. Clothing is an intimate but public expression of an individual's response to a cultural moment.

Any plans on the horizon to share or parting words for those interested in the history of fashion and design as a career?

Costume history can be a valuable tool for understanding broader cultural issues: it can increase understanding of an artist's choices in portraiture, for example, or the fascination with exotic influences in culture. To really understand costume history every aspect of culture is relevant: the history (war, geography, politics), economics (trade, inventions), social relationships (rituals, marriage, parenting, community), the arts (painting, music, theatre).