European Fireworks in the 18th and 19th Century

In our recent exhibit,  “In the Style of the Emperor” was the print titled “DECORATION DU FEU D'ARTIFICE DUNNE PAR LA VILLE DE PARIS” (A DECORATION OF FIREWORKS BY THE CITY OF PARIS) which shows the set-up location for an elaborate fireworks display given on the occasion of the marriage of Napoleon to his second wife Marie-Louise. Firework shows like this were immensely popular at the time and were the result of centuries of development.  In honor of the fireworks displays we’ll all be seeing on the 4th of July we’ve decided to examine the history of fireworks displays through the lens of this piece. 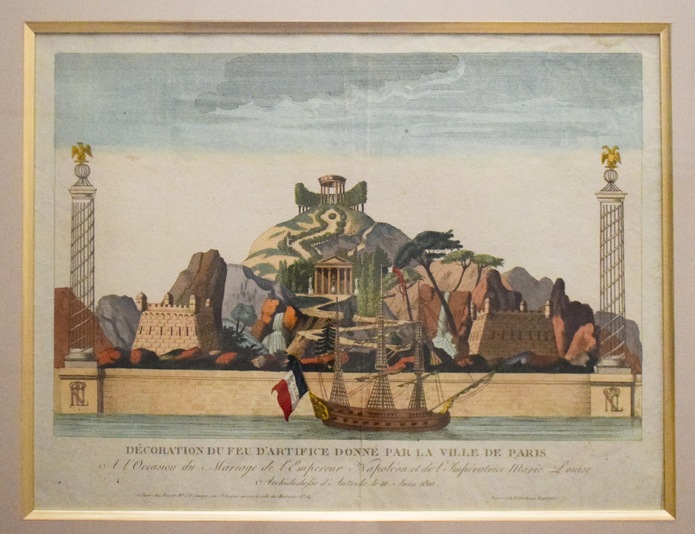 The earliest iteration of a firework was created around 600 AD in China when alchemists combined potassium nitrate, sulfur, and charcoal into an early form of gunpowder which they then stuffed inside bamboo shoots. Over the next several hundred years the technology continued to develop resulting in the first military rocket cannons and the first aerial fireworks.

By the 13th century knowledge of this explosive powder and its uses came to the Middle East through trade. From there it spread to Europe in the 14th century where it would revolutionize warfare by leading to cannons and muskets. More to the point it also led to further developments in fireworks, which became wildly popular among royalty and the upper classes to celebrate important events such as weddings and military victories. 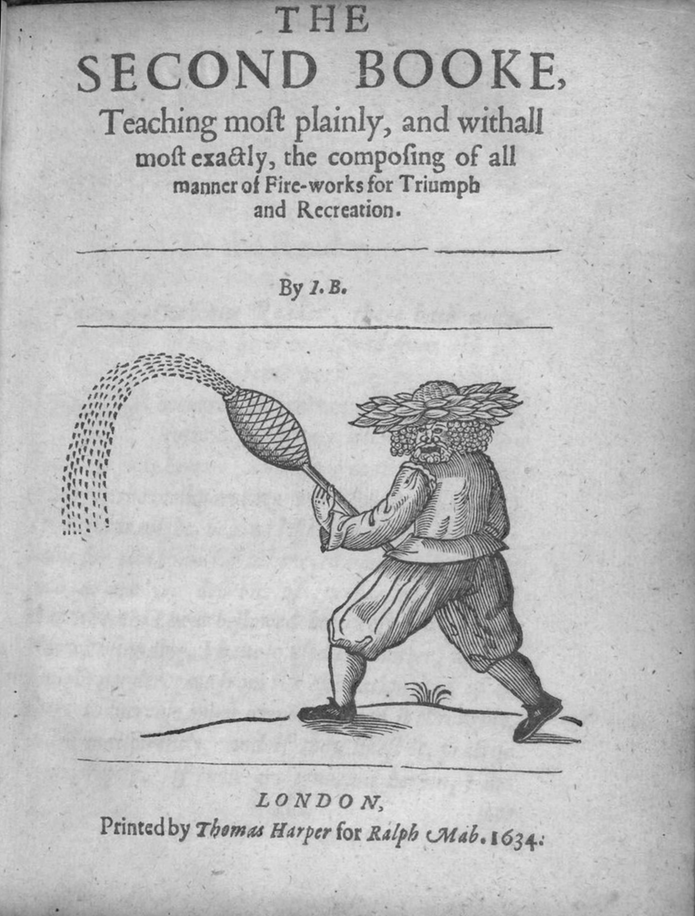 Engraved title plate from the second book of John Bate's 'The Mysteries of Nature and Art' 1634.

The popularity of fireworks created a new career option, the pyrotechnician. During the early days of pyrotechnics in Europe they were sometimes called green men because they wore fresh leaves on their heads and clothes to protect themselves from stray sparks. In 1739 the Ruggieri family moved from Italy to France to work as the pyrotechnicians to King Louis XV. The Ruggieri family’s large displays were known for their theatrical nature which made them quite popular among European royalty. Several members of the family would travel to different European countries to work including across the channel to George II’s court. Ruggieri’s company survived every subsequent major political and military event in France including the fall of the monarchy they came to serve. The company is still active today. 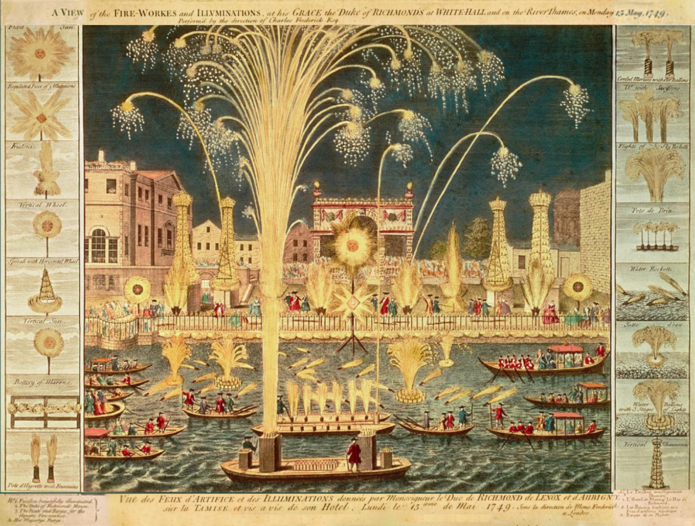 A VIEW of the FIRE-WORKES and ILLUMINATIONS at his GRACE the Duke of
RICHMOND'S at WHITEHALL and on the River Thames on Monday 15 May 1749.

In 1787 a French chemist, Claude Louis Berthollet (1748-1822), discovered potassium chlorate which is a powerful oxidizer. This allowed fireworks to burn brighter. It also had the added effect of allowing added colors to appear more vivid. Prior to this discovery the color of fireworks tended to be a dull gold, red, or green. Berthollet had not set out with the intention of revolutionizing fireworks. He had set out to make more practical munitions for the military. However, potassium chlorate ended up being too unstable for use in munitions. Berthollet would later be chosen as one of the scientists to accompany Napoleon on the Egyptian campaign in 1798. 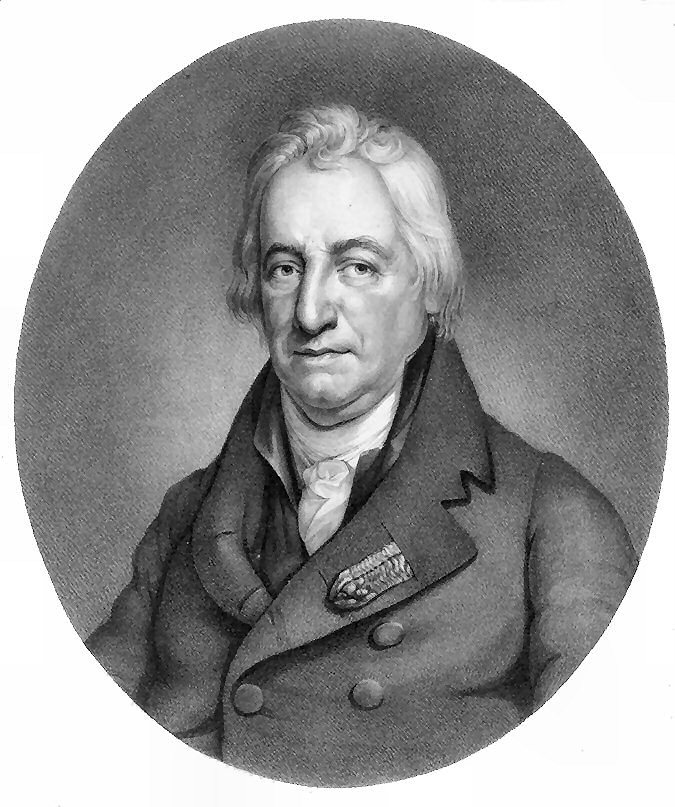 Claude Ruggieri (1777-1841) is one of the better-known members of the Ruggieri family. This is at least in part due to his prolific experiments with rockets and fireworks. Ruggieri was particularly invested in developing unique and bright colors. Along with these experiments he created specialized casings and display elements. He published three works detailing his findings and how he implemented them. His 1811 book Elémens de Pyrotechnie includes descriptions of the display he created for Princess Borghese, Pauline Bonaparte, at her palace in Neuilly in honor of her brother Napoleon’s second marriage. The display was scheduled for June 14th in 1810 as part of a series of celebrations in the couple’s honor. It included some similar elements to the display from four days before. A temple of Hymen stood elevated at the center, the surrounding area included “palm trees” that would shoot out green fireworks in place of the palm fronds, and centered below the temple two portraits of the couple would be revealed. According to later writings by Ruggieri this was when he first used the green fireworks he had developed. 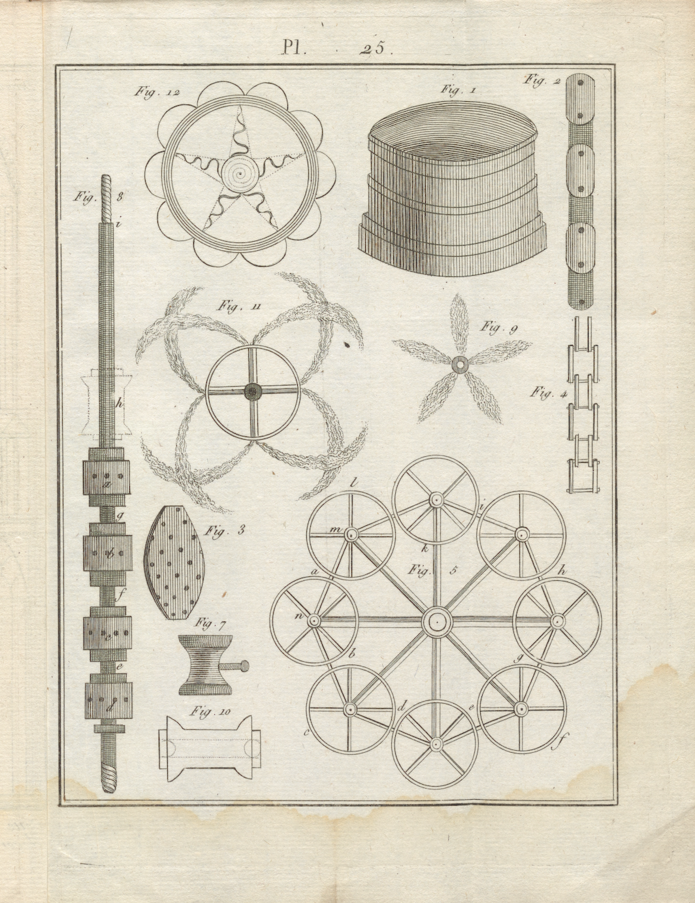 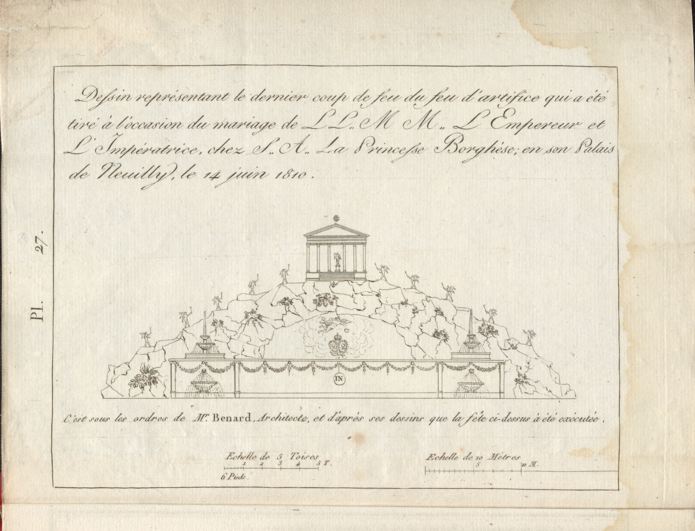 Bénard, Pierre. “Plate 27_ Final Firework Display at the Celebration of the Marriage of Napoleon and Marie Louise at
the Residence of Princess Pauline Borghèse, the Palais De Neuilly, on 14 June 1810.” In Elémens De Pyrotechnie. 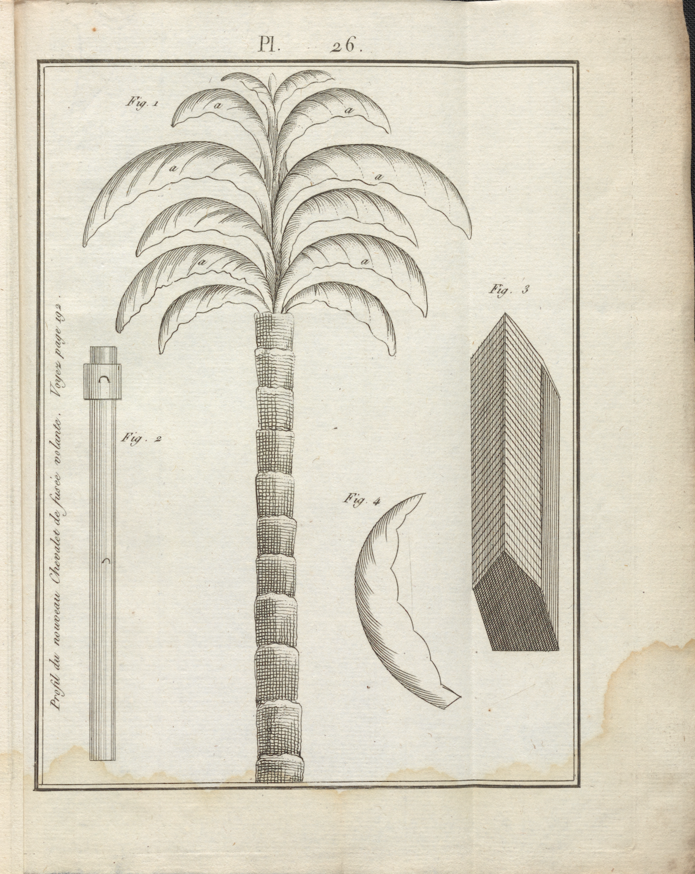 The city of Paris continued to host massive events celebrating the marriage of Napoleon I and Marie-Louise throughout the month of June in the year 1810 and our print in the MOAS collection documents one of the most extravagant. The print, DECORATION DU FEU D'ARTIFICE DUNNE PAR LA VILLE DE PARIS (A DECORATION OF FIREWORKS BY THE CITY OF PARIS), shows the set up during the day on June 10th. The display included theatrical elements employing around 500 actors. It was split into three parts with the first being a mock battle between the two columns. The battle ended when the ship, a representation of the city of Paris, arrived and anchored between the forts. At which point the forts “burst into flames.” This was followed by two more pyrotechnic displays; one focusing on the Temple of Peace and the next focused on the Temple to Hymen, the Greek god of marriage. 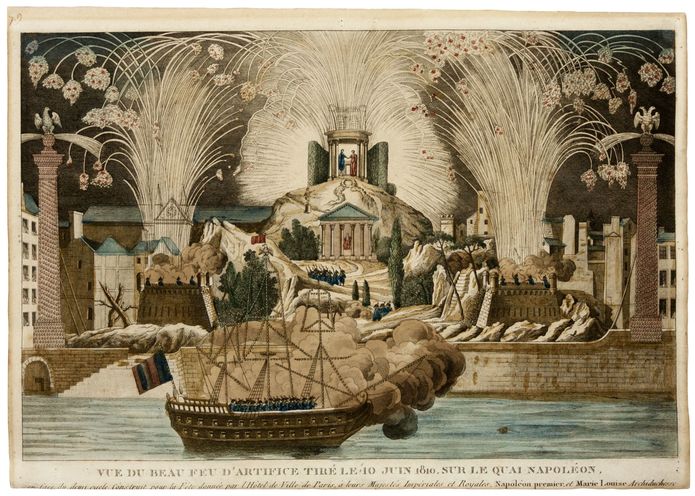 Broadside of the Pyrotechnic Celebrations following Napoleon’s Marriage to Marie-Louise.