Currently on view in the Bouchelle Changing Gallery is an exhibition of decorative hand fans from the MOAS collection that was inspired by last year’s exhibition of fans owned by local collector Judy Bush. A special thanks to Judy and her network of fan experts for their help in researching this rare collection. 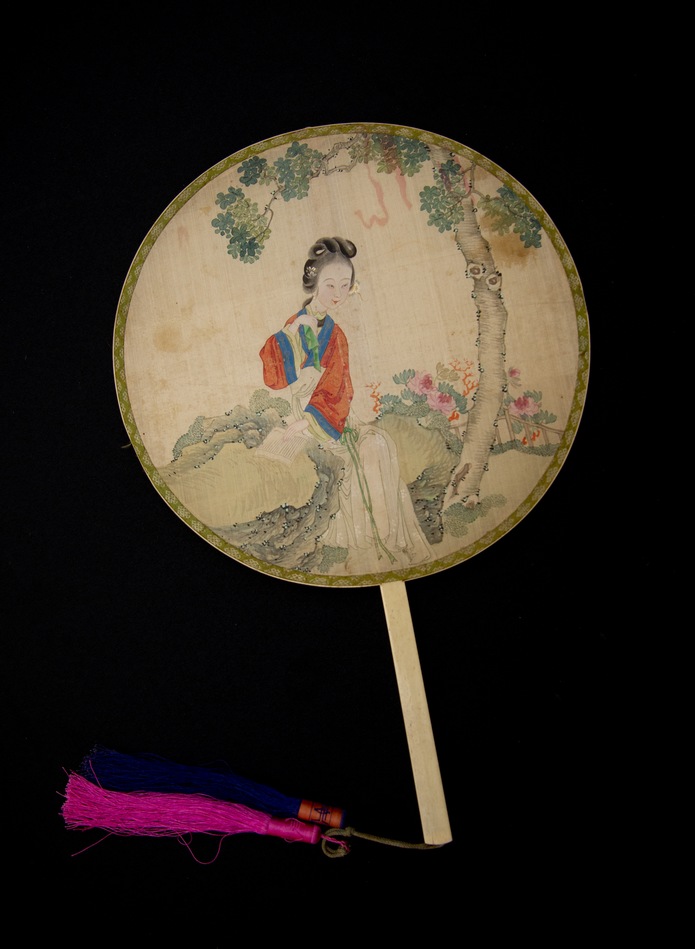 People have used hand fans for personal cooling since ancient times. And, over the centuries, cultures throughout the world came to view the expanse provided by both folding and flat paddle fans as the perfect support for decorative imagery, whether that might be simply a grouping of flowers, a genre scene representing an idyllic day outdoors, or something more specific to a time, place or individual. Following art historical trajectories of each culture, hand fans reflect a more immediate and personal type of decorative art that allows us a view into the everyday tastes of the owners of these useful items that were considered necessary accessories in the days before air conditioning. 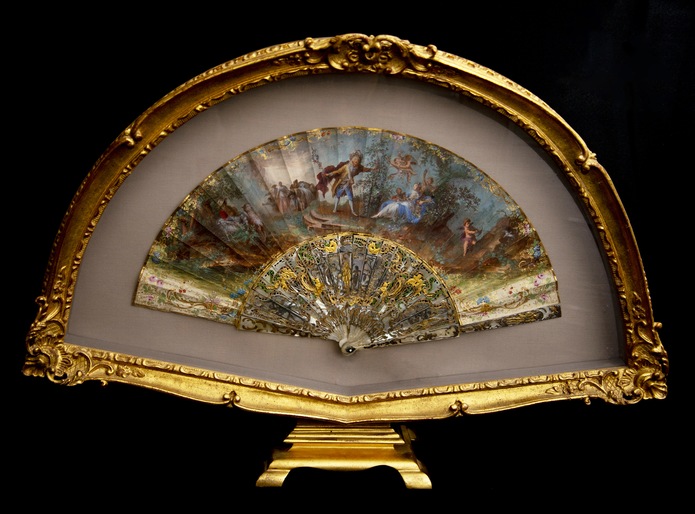 The Museum of Arts and Sciences' collection contains rare examples of 18th and 19th century French fans that display the shift in decorative style from the Rococo period of the pre-revolutionary aristocracy to the Napoleonic era in the early 19th century. 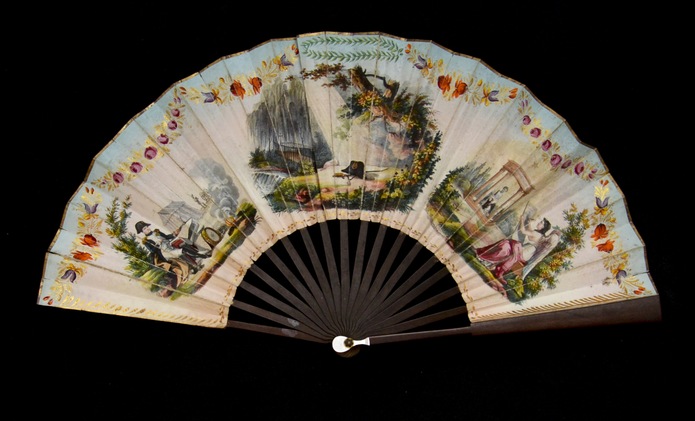 Beautiful examples of the fete champêtre, or festive outings of the idle rich that populate much of the most famous scenes from 18th century art sponsored by the French court of Louis XVI at Versailles, are represented in the collection as well as a fascinating subset of souvenir fans commemorating the life and death of Napoleon. Some in this last category are dated to years when Napoleon was still alive and others have allegorical scenes pertaining to his death and apotheosis, proving that the notion of the “cult of the celebrity” gained a good deal of traction during and after the emperor’s reign. And the museum’s Napoleonic fans bear testament to a lively industry that thrived producing souvenirs for locals and tourists alike to collect and display their affection for this famous French leader. 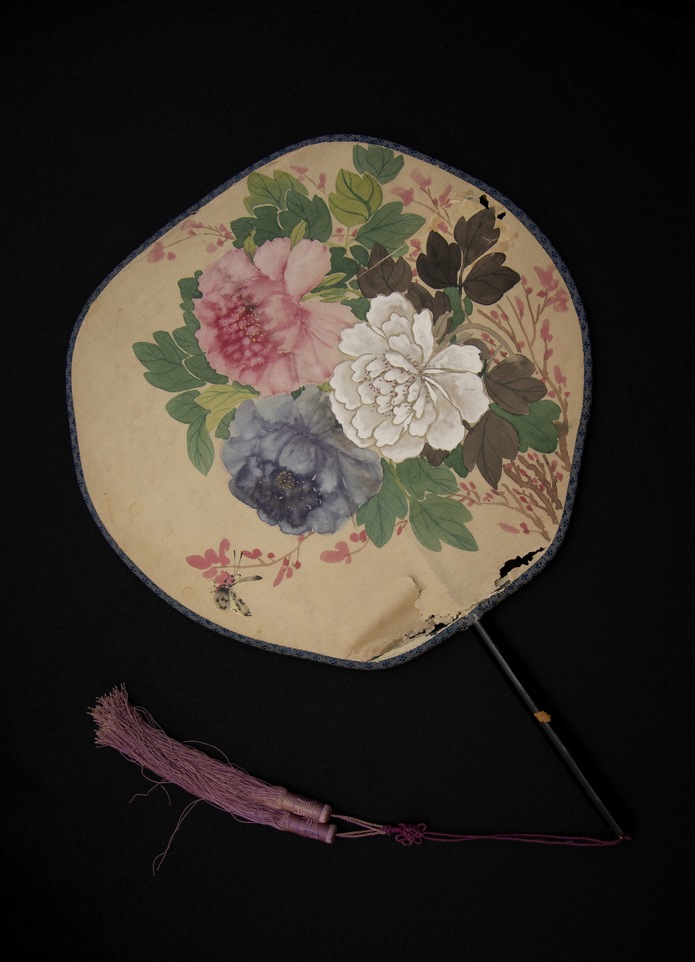 Chinese paddle fans – traditionally, the preferred fan format in Asia - of the 18th and 19th centuries shared similarities in favored genre scenes and floral depictions but deviated in a significant way in the artistic traditions used to embellish them. 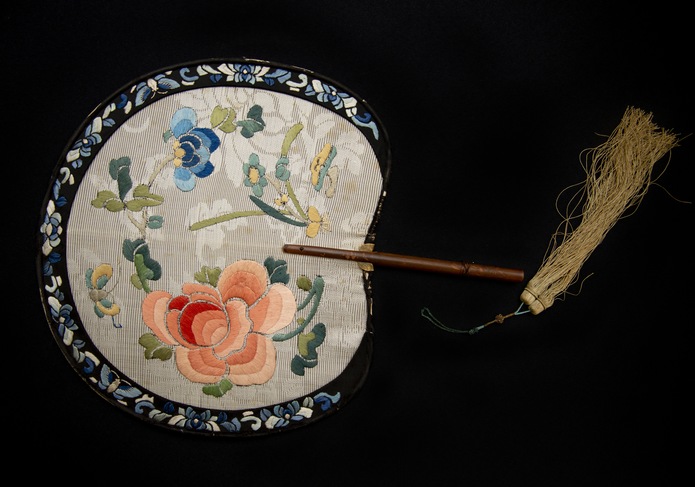 Highly skilled painters rendered lovely scenes in small formats on the flat surface of Chinese paddle fans but this esteemed tradition married with that of the exquisite embroidery sponsored by the Imperial families of the C’hing dynasty. For centuries, Chinese embroiderers from primarily the Suzhou region of the country produced highly detailed silk-thread embroidered wall hangings, garments, bed coverings, and other items for the monied classes in Imperial China. More than merely a craft, skillful and time-consuming embroidery of high quality was valued highly by those that could afford it and embroidered hand fans, often based on paintings, became common accessories. The Museum is fortunate to have both fine hand-painted fans and embroidered fans, complete with beautifully adorned padded cases, from this tradition in the collection. These cases attest to the high value placed on these items in a Chinese household. 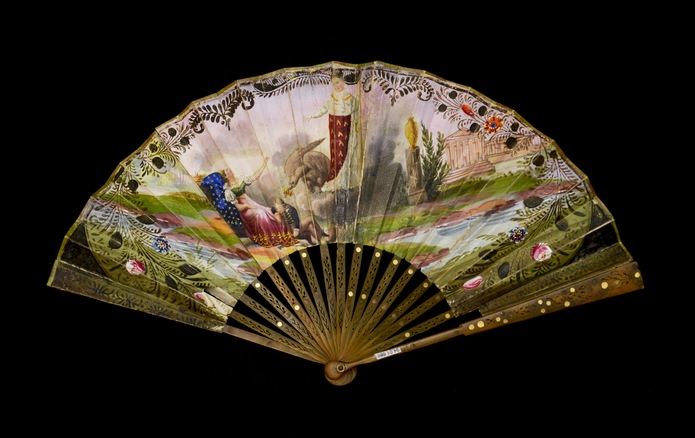 In this exhibition, East Meets West over the humble form of the personal hand fan – an item of universal importance in centuries past. And in each example on view here, references to the unique cultural and historical backgrounds of the countries and times represented allow us a view into the lives of those who held close these modest yet essential objects of everyday use.