By Senior Curator of Education and History, James "Zach" Zacharias

It is hard to imagine that the glyptodont, the giant creature with a likeness to an armadillo on display in the Museum's Prehistory of Florida Gallery, has any relationship to the giant ground sloth. Amazingly, they are cousins and have evolved tens of millions of years ago from a common ancestor in South America. As the continent floated around the Atlantic Ocean in splendid isolation, weird and marvelous creatures evolved. Because of this, anteaters, armadillos, extinct giant ground sloths, pampatheres, tree sloths, and glyptodonts are all closely related. They all exist in a family of animals called the Xenearthra, which means strange joints. What makes these animals closely related can be found in the structure of their lower lumbar vertebrae. These vertebrae have extra spinal bone processes on them that help the giant ground sloth rear up to feed in the tops of trees, and in the case of the glyptodont, to dig a burrow. They share similar peg-like teeth that have no enamel. These teeth grow throughout the entire life of both animals and never completely wear down.

Glyptodont is a Greek word meaning "grooved or carved tooth." This animal grazed on rough grasses and small scrubs near streams and tributaries. They began moving into the southeastern part of North America after the isthmus of Panama formed some 3 million years ago. This landbridge between the two continents allowed for the Great American Biotic Interchange. Animals now could travel between both continents. Giant ground sloths and the glyptodonts are two animals that made their way north across the new landbridge and eventually found a new home on the Florida peninsula. Although some animals may have island hopped early before the formation of the isthmus, the landbridge offered an easier and more natural passageway. 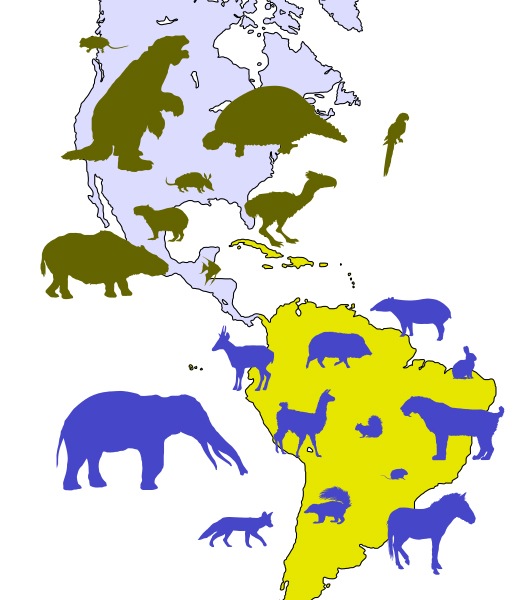 The glyptodont is a perplexing looking mammal that had a huge shell-like armor on its back. Actually, it is not a shell at all, but instead, bony plates called osteoderms that give the appearance of a carapace. It contains over 1,000 individual hexagonal bone plates known as scutes. Each animal had its own individual pattern of bony osteoderms that were as unique as a human's fingerprint. These scutes break apart into pieces after the animals die and are quite a common fossil find in certain Florida rivers. The Glyptodont possessed a powerful armor-like tail that was used to defend itself. Males most likely swung them like a war club against each other for mating rights or territory. 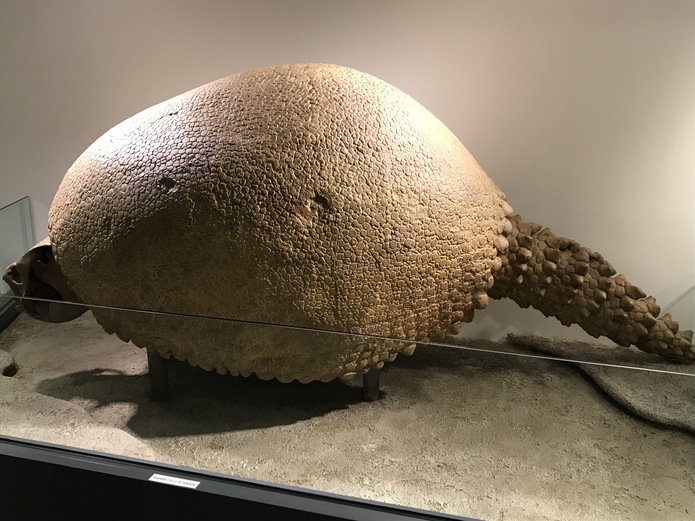 The glyptodont weighted as much as 4,000 pounds and could reach a length of over five feet. As a placental mammal, its fur would have been found on its face, legs, and in thin amounts of hairs in and around its large shell. Short, massive limbs were essential to carry around a broad heavy body. The tail was made of rigid bone giving it strength but enough flexibility to swing it like a club. Its eyesight is considered to be fairly poor and it was probably colorblind and sensitive to bright light. This sensitivity made the animal active in the twilight hours with it spending its day inside a burrow away from the bright light of the Sun.

The Museum's glyptodont is a cast replica based on a find from South America. This specimen was acquired from Stetson University in the late 1970s as a gift from the Science Department. This amazing antique replica was cast in 1898 in Dijon, France and was a product of the Ward Scientific Company which creates replicas of natural history specimens as early as 1866.