To Choose Our Destiny: The Lasting Legacy of the Apollo 11 Moon Landing

As a species, we have an innate desire to explore. This urge to push into new frontiers is fueled by an everlasting curiosity that is a defining attribute of humankind.

Throughout our history, there are countless of when this curiosity launched us into the unknown: through discovering uncharted territory, industrial and technological revolutions, pushing the limits of the human body, and unraveling our philosophical views of the universe. We pushed the boundaries in all these pursuits when we reached out and touched Earth's closest celestial neighbor, the Moon. 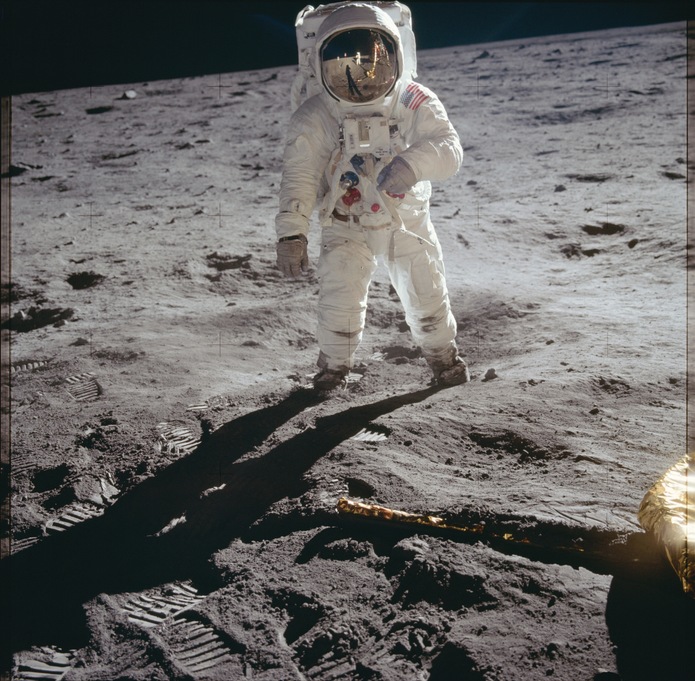 Buzz Aldrin on the surface of the Moon during a lunar excursion. This photograph was taken by Commander Neil Armstrong
and is one of the iconic images of the Apollo 11 mission. Image Credit: NASA

2019 Marks the 50th anniversary of the first human landing on the moon during the Apollo 11 mission.

Neil Armstrongs's first step on July 20th, 1969 was not only an achievement for NASA and the United States but for the entire world.

Our exhibit this summer, To Choose Our Destiny, hopes to celebrate this achievement as one of the most influential and iconic chapters in human history, and emphasize how our fierce determination propelled us to break past the self-imposed boundary of what we thought was possible.

Even though much of the politics behind the Moonshot was an arms and technological race with the Soviet Union in the 1950s and 60s, this sentiment could only take us so far. In President John F. Kennedy's famous speech at Rice University in 1961 - on the heels of the first successful launch of an American into space - he only mentions the Soviet Union once. His renowned "We choose to go to the Moon" speech was most aspirational - emphasizing the everlasting spirit of exploration that could drive us to the Moon by the end of the decade.

Throughout the exhibit, we highlight key moments of Apollo 11: from the engineering and training, to the local contributions in Florida and Daytona Beach, to the historic mission, and to the successful end and everlasting mark it left on our society.

This can be seen through the plethora of photographs captured through the mission, artwork from renowned artists who visited the Cape, actual equipment from the Apollo era, and memorabilia that served as a means for the public to engage with space exploration.

Just 65 years before the Apollo 11 landing on the Moon, the Wright Brothers made the world's first heavier-than-air flight in their small wooden aircraft. By the end of the 1960s, we were launching 3200-ton metal rockets a quarter-million miles to the Moon. 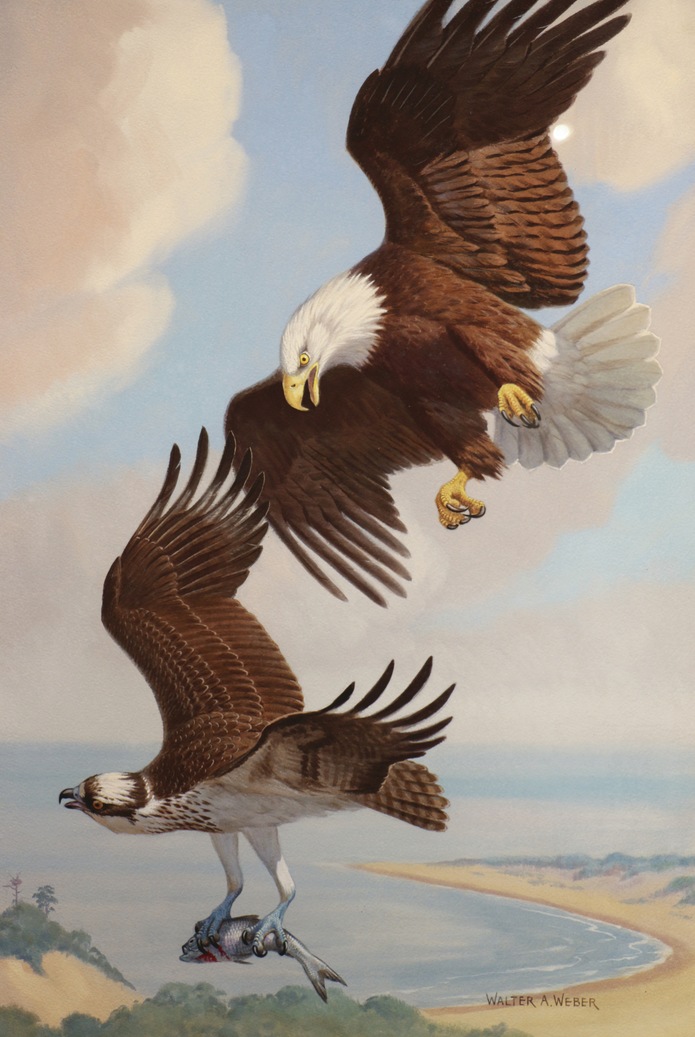 "Eagle and Osprey, 1949," by Walter Weber. This original illustration is featured in the exhibit and became the eagle that inspired the Apollo 11 mission emblem.
Astronaut Michael Collins found a photo of this illustration in an issue of the National Geographic and traced it on tissue paper to be transferred over to the final patch design
that included the Moon, Earth, and Apollo 11 title. On loan from Cici and Hyatt Brown.

The technological and engineering innovation that was needed in such a minuscule amount of time - even in human history terms - to pull off such a feat cannot be understated. This could only have been accomplished by a vast and inspired workforce of engineers, scientists, technicians, countless support staff from NASA, and private firms around the country.

Even brilliant minds from other nations were needed to accomplish such lofty goals, especially in the early days of America's rocket program before Apollo.

Hundreds of German engineers were brought to the United States in Operation Paperclip just after World War II, including the famed Wernher von Braun. Under Braun's leadership and expertise in military rockets, the Saturn V was eventually developed as the launch vehicle to the Moon.

Highly efficient and effective management was also needed to bring all these complex pieces and workforces together in a timely manner. Much of this was possible by then NASA Administrator, James Webb, who, with his experience in Washington, helped the relatively new government agency to navigate the political landscape of the time.

This reliance on the team is at the heart of the Apollo program, and could not be better explained than by the person who stood on the shoulders of giants to accomplish something bigger than himself.

When Neil Armstrong was asked about being the first astronaut to walk on the surface of the Moon, his automatic response in an oral history he gave was to not take credit when he stated, "I can only attribute that to the fact that every guy in the project, every guy at the bench building something, every assembler, every inspector, every guy that's setting up the tests, cranking the torque wrench, and so on, is saying, man or women, 'If anything goes wrong here, it's not going to be my fault, because my part is going to be better than I have to make it.' And when you have hundreds of thousands of people all doing their job a little better than they have to, you get an improvement in performance. And that's the only reason we could have pulled this whole thing off."

The Giant Leap to the Moon

Following one and a half orbits around the Earth, a translunar coast that spanned 240,000 miles in three days, and a series of revolutions around our natural satellite, it was time for the Apollo 11 crew to land on the Moon on July 20, 1969.

Just over 100 hours after the launch of Earth, Neil Armstrong and Buzz Aldrin departed in the Lunar Module (LM) Eagle, while Michael Collins stayed behind inside the Command and Service Module (CSM).

As Command Module Pilot, Collins later commented on his isolation from the rest of the crew saying, "I don't mean to deny a feeling of solitude. It is there, reinforced by the fact that radio contact with the Earth abruptly cuts off at the instant I disappear behind the Moon, I am along now, truly alone, and absolutely isolated from any known life. I am it. If a count were taken, the score would be three billion plus two over the other side of the Moon, and one plus God knows what's on this side."

After a series of checkout maneuvers and breaking thrusts, the LM brought the two Apollo astronauts down to the lunar surface. Piloting the LM in its final descent, Armstrong took semi-automatic control with Aldrin calling out navigation data. Armstrong had to make a series of last-minute trajectory corrections to the descent to avoid boulders and a crater and troubleshoot a guidance computer error. With only 25 seconds left of fuel remaining, Armstrong brought the LM down to the surface of another world for the first time.

At 102 hours, 45 minutes and 40 seconds into the mission, Armstrong declares famously, "Houston, tranquility base here. The eagle has landed." 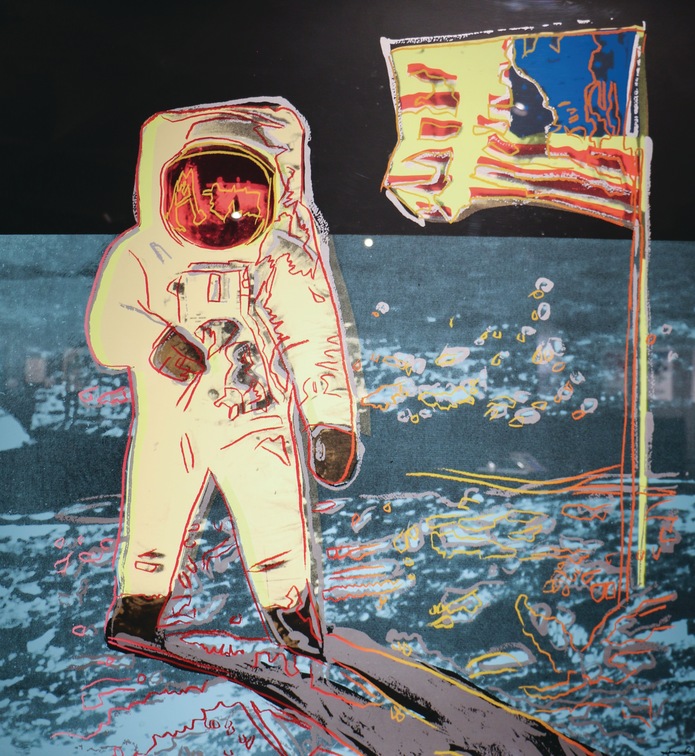 Seen in this silkscreen print of his famous "Moonwalk" series, the famous American pop artist, Andy Warhol, completely transforms one of
the most iconic photographs taken in NASA history - astronaut Buzz Aldrin on the Moon during the Apollo 11 mission.
On loan from the NASA and the Kennedy Space Center Visitor Complex.

Shortly after the historic landing with brief rest and final preparations, Neil Armstrong opens the LM hatch to the outside lunar environment.

Descending the ladder that carried the commemorative plaque, Armstrong stepped off the Eagle echoing those eternal words, "That's one small step for [a] man, one giant leap for mankind."

Aldrin made his first leap shortly after, describing the Moon as "magnificent desolation."

Aldrin made his first leap shortly after, describing the Moon as "magnificent desolation."

While on the surface, the two Apollo astronauts kept busy learning to walk in the low gravity dusty environment, collected 47 pounds of lunar soil samples, deployed a series of experiments, and captured as many images of the surrounding landscape as they were able.

In total, Armstrong and Aldrin collectively spent two-and-a-half hours on the Moon's surface before climbing back into the LM. At 124 hours, 22 minutes into the mission, the crew launched back into space aboard the LM to reconnect with Collins in the CSM in lunar orbit.

The Lasting Legacy of Apollo 11

Six hundred million people (20 percent the world's population at the time) watched one of the most pivotal moments in history as astronauts stepped foot on the Moon, and as fleeting as the moment was, they were ready to fly home to Earth for a hero's welcome.

Neil Armstrong and Buzz Aldrin spent just over 21 hours collectively on the lunar surface before the LM Eagle ascended to the CSM Columbia. 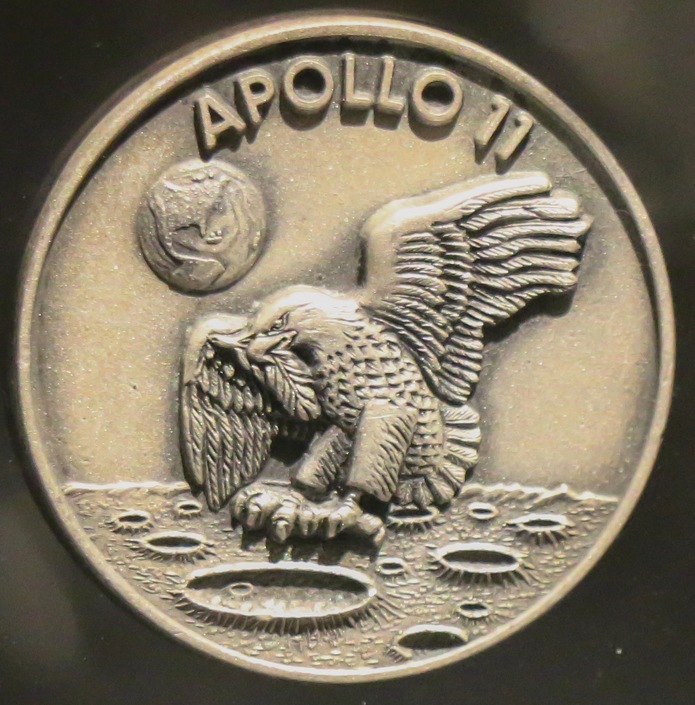 This medallion, with the famous Apollo 11 insignia on the front, was flown to the Moon during the historic landing on July 1969.
The back highlights significant dates of the mission, the Apollo 11 crew, and a serial number. This particular medallion was originally part of the personal collection
of Mercury Seven astronaut, Wally Schirra, that was presented to him by Commander Neil Armstrong. On loan from Preston Root.

Joined back with Michael Collins in the CSM after docking, the LM was finally jettisoned into lunar orbit. On July 21, 1969, the CSM's engines were fired to enter trans-Earth injection for the trip home.

Triumphantly, 195 hours, 18 minutes and 35 seconds after launch from Cape Canaveral, the Apollo 11 crew splashed down in the Pacific Ocean, 13-miles from the recovery ship, the USS Hornet.

Back on Earth, the Apollo crew- among many others that were involved with the mission - celebrated the massive achievement of landing humans on another celestial body.

Six million people attended ticker-tape parades in New York and Chicago to honor and catch a glimpse of the crew, less than a month after splashdown.

Even though Apollo 11 became a proof of concept of simply getting to the Moon, the science it brought back still has an impact today. 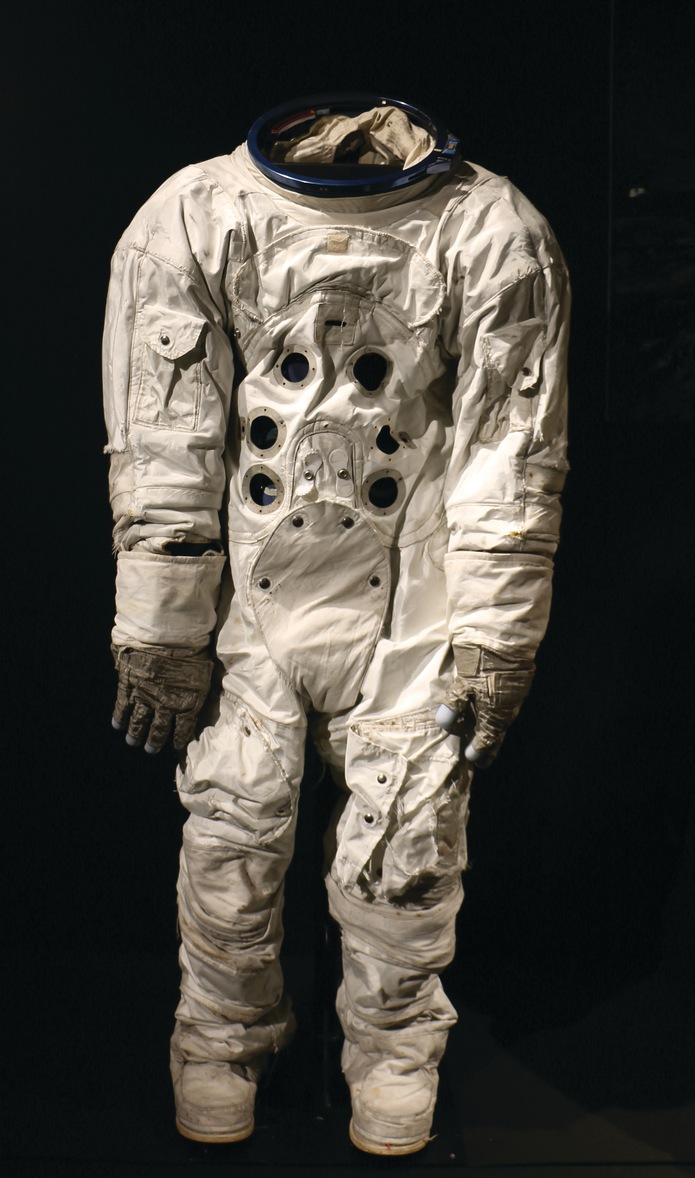 This Apollo era A7L training suit is a centerpiece of the exhibit, displaying the complexity and design of the 1960s era spacesuit.
On loan from NASA and the Kennedy Space Center Visitor Complex.

The 47 pounds of Moon rocks collected were carefully divided for study in laboratories around the world. In order for future generations to apply their current techniques of research, some lunar samples were preserved by staggering their distribution in the following years after the mission.

The Passive Seismic Experiment that was left on the Moon by the crew only lasted a month but sent vital feedback to Earth on Moonquakes and its interior. The Lunar Laser Ranging Experiment that has enabled scientists to bounce lasers off the Moon is operational today, still being used to measure the rate at which the Moon is drifting away from our planet.

Spinoff technologies from Apollo still yield unintended benefits to society that can be found in our personal computers, cell phones, medical devices, aircraft design and safety, and much more.

Apollo 11 left a mark on history that is beyond just getting to the Moon, but a testament to the human spirit to explore what is beyond our horizon.