Syracuse University Art Museum has one of the best collections of 20th-century American prints in the country and MOAS is pleased to be featuring a selection from this collection in the Karshan Center for Graphic Art in the West Wing of the Museum.  Pulled, Pressed and Screened: Important American Prints will be on display through April 30, 2017.

In Pulled, Pressed and Screened: Important American Prints visitors can not only experience fine prints by some of the most important 20th century American artists, including John Steuart Curry, Grant Wood, Thomas Hart Benton, Stuart Davis, Elizabeth Catlett, Jasper Johns, Roy Lichtenstein, Robert Rauschenberg and Andy Warhol (to name only a fraction) but, also, be reminded of some of the most critical periods in this country’s history from the last century.

The Regionalist artists from the 1930s that came to prominence depicting the hardscrabble life of everyday Americans struggling to get through the Great Depression are well represented in works by Grant Wood (of American Gothic fame), Thomas Hart Benton and John Steuart Curry. Wood’s charming lithograph shows boys digging the holes, with other students looking on, for a tree planting in front of a country school and Benton portrays a lively night at a dance hall in Appalachia. But Curry’s print of the legendary abolitionist John Brown is the most famous of the 1930s images in the exhibition.

Referring back to 1855 in the Midwest, Curry’s print is actually a detail of the central figure in a mural he was commissioned to paint for the Kansas statehouse in 1937. Curry chose tornados, the covered wagons of pioneers moving west and Kansas’ history as a boundary for the progression of slaveholders in this migration. A controversial figure who incited violence towards pro-slavery settlers, John Brown is nevertheless considered a key figure in the history of the state of Kansas and Curry’s mural, created in the depths of the Depression, was meant to inspire pride in the hearts of Kansans. To many it did anything but that and Curry left the state disillusioned and never having finished his mural series in the statehouse. The central image of John Brown, however, became one of his most famous prints.

Battery (Belles), by Reginald Marsh, on display at MOAS through April 30, 2017

The march towards equality for those underrepresented in the power structure is a central theme in the history of 20th century America and it is present in many of the works in this exhibition. After finally achieving the vote and gaining greater autonomy during war time, women made great strides in the early part of the century, as quite literally portrayed in Reginald Marsh’s Battery (Belles) of 1938 in which an “office girl” strains against the wind by the water of lower Manhattan as she hurriedly makes her way to work against the backdrop of ocean liners, tugboats, and ferries plowing the waters of New York Bay. 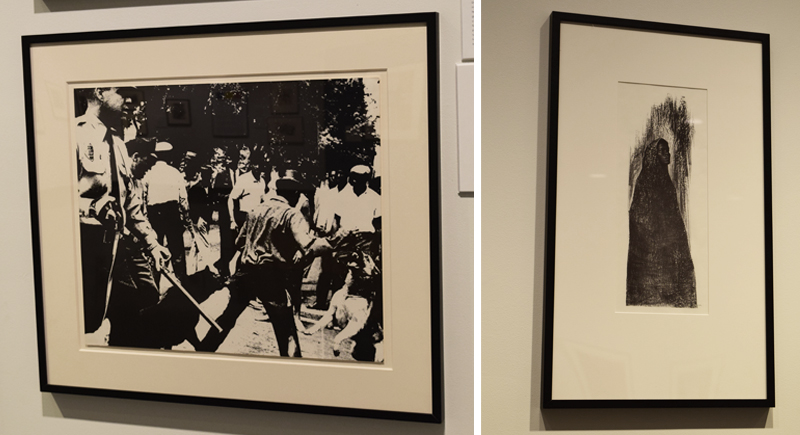 From left to right, Birmingham Race Riot by Andy Warhol and Go Tell it on the Mountain by Charles White,
on display at MOAS through April 30, 2017

The African-American struggle in the last century is illustrated with seminal prints by Charles White and Elizabeth Catlett, who were husband and wife, as well as famous images of Martin Luther King, Jr. by Ben Shahn and the Birmingham Race Riot by Andy Warhol. White’s Go Tell it on the Mountain shows a stoic figure of young black woman draped in a cloak with references to the Madonna and the well-known bible hymn while Survivor is a linoleum block print made by Catlett in 1983 after a photograph by Dorothea Lange called “Ex-slave with a Long Memory” taken in Alabama in 1937 or 1938.

Ben Shahn captured Martin Luther King, Jr.’s face only in a depiction of his full-throated proclamations as the famous preacher and civil rights activist who exhorts the crowd in the struggle for justice and Warhol’s Birmingham Race Riot of 1964 reminds us how bitter and frightening that struggle often was. 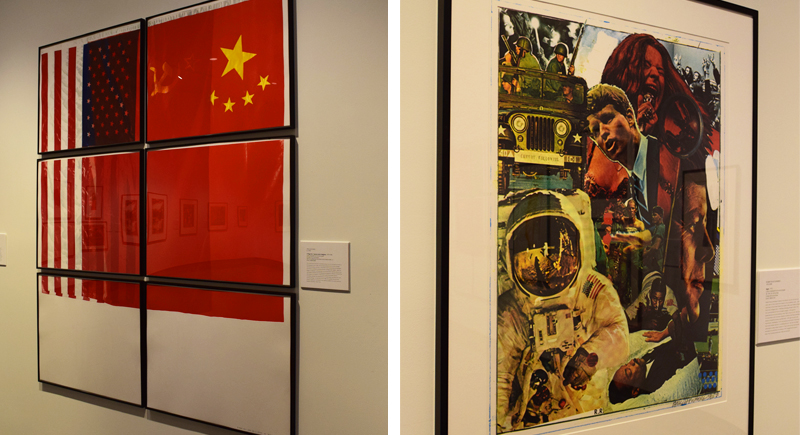 From left to right, 3 Flags for 1 Space and 6 Regions by Vito Acconci and Signs by Robert Rauschenberg,
on display at MOAS through April 30, 2017

The most comprehensive historical piece in the exhibition is Robert Rauschenberg’s Signs from 1970 which, in photo-collage style, pulls together the Kennedy brothers, Civil Rights violence and Martin Luther King, the Vietnam War, the first steps on the moon, Janis Joplin and more. An iconic image of turbulent mid-century American milestones and tragedies, it is no less striking in its message than Vito Acconci’s 3 Flags for 1 Space and 6 Regions in which the American, Russian and Chinese flags are overlaid upon each other indicating the dominating presence of the ‘super-powers’ and their potentially deadly rivalry for terrestrial space. It is a piece, along with June Wayne’s Visa Friday – a reverse image of the artist’s thumbprint in white against black – that, while over nearly 40 years old, has particular resonance today.