The (Re)Making of a Museum 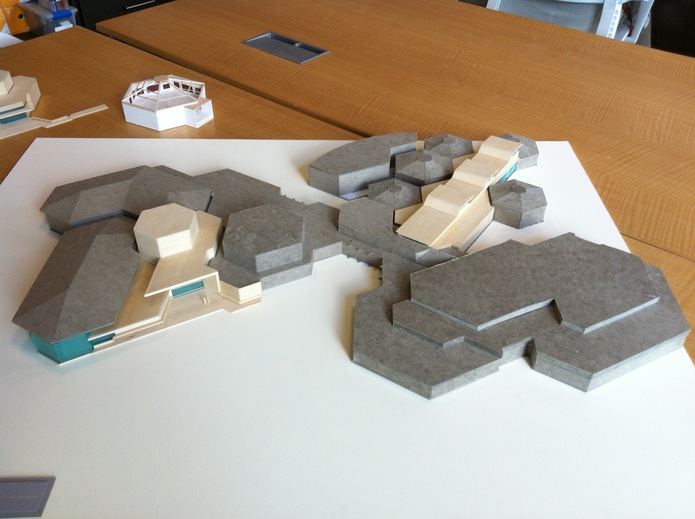 Stantec was awarded the commission in 2011 through a design competition. Often, this strategy brings out the best ideas, but more often not. Designers do not have the chance to dialogue with their owners, to ask questions, and to mix it up with the staff and the Board. Stantec's design team was successful during the competition because the intent was to preserve the Museum's orginial design, rather than wipe it clean and begin fresh. Our vision showed a willingness to persevere through existing conditions which aligned with the Board's vision, and as a result, the competition process served the Museum well.

This project arose from flood damage suffered during the heavy rains of May 2009. The Museum lies in a wooded lowland running parallel to the Intracoastal Waterway. The Museum's oldest portions, built in these lowlands, disastrously flooded.

The flooded wing included the Planetarium, and the galleries of the West Wing. Designed in the 1960s by architect William R. Gomon, it consisted of a series of hexagonal "pods" in a honeycomb pattern. This latticelike plan was quintessential 1960s: think Buckminster Fuller and his theories about Spaceship Earth; think geodesic dome, think Epcot. The design captured the Space Coast's optimism during the Apollo era.

It was appealing to add on galleries, and indeed the Museum grew quickly in the decades after its founding. This hexagonal geometry is still quite legible in the ceiling of the orientation gallery. It is here, immediately after traversing the Guest Services Entry, one has an initial impression, and the originial design intent of the Museum is part of this experience.

Many of the Museum collections were damaged from the flood. This required a re-set of much of Gomon's early thinking. Brilliant in conception; the pods were difficult to display artwork, and the collection had grown in both scope and significance. The hexagonal pods fought with the contemporary interpretation needs of art and artifacts.

The planetarium and galleries of the West Wing were low, with newer wings built up much higher off the ground. We relocated the Planetarium to the courtyard of the front of the structure to recognized its operating hours and raise it up higher. Blending the Planetarium's form into the Root Family Museum's outdoor train station allowed a new front door to take place. The Train Station, in particular, became a focus of design. 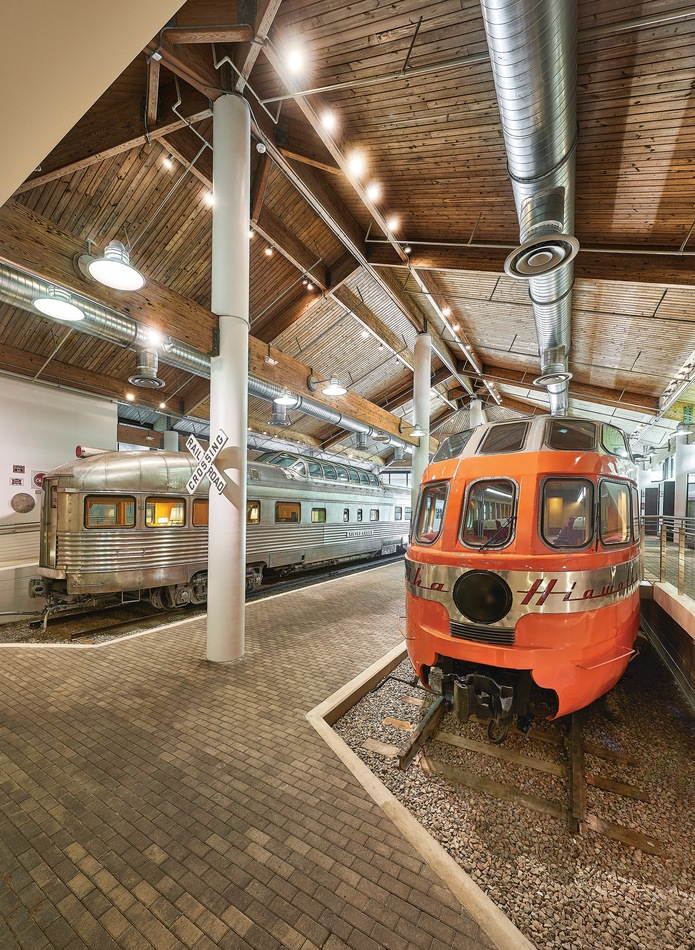 The train cars were enclosed with a clean, contemporary design that frees the visitor to imagine
these cars rolling into passenger stations nationwide.

We saw that the form of the roof was appropriate in scale and architectural language to recall the train stations that these cars must have pulled into. When we added the Planetarium, we enclosed the train cars with a clean, contemporary design that frees the visitor to imagine these cars rolling into passenger stations nationwide.

And indeed, with the enclosure of the train shed, the space becomes free. The row of windows under the roof eave allows light to wash into the space, filling its volume like a cathedral. Reflected light brigns forth the car's beautiful luster without glare or deep shadows. The space has a contemplative astomsphere that elevates the historic train cars, now fully restored.

In contrast, the Planetarium's exterior architecture speaks in a new language. The design team sought to create an impactful lobby entrance and let the dome be a surprise within the space. The Planetarium's curved feature is presented to the visitor within, a promise of an experience awaiting inside the Planetarium itself. 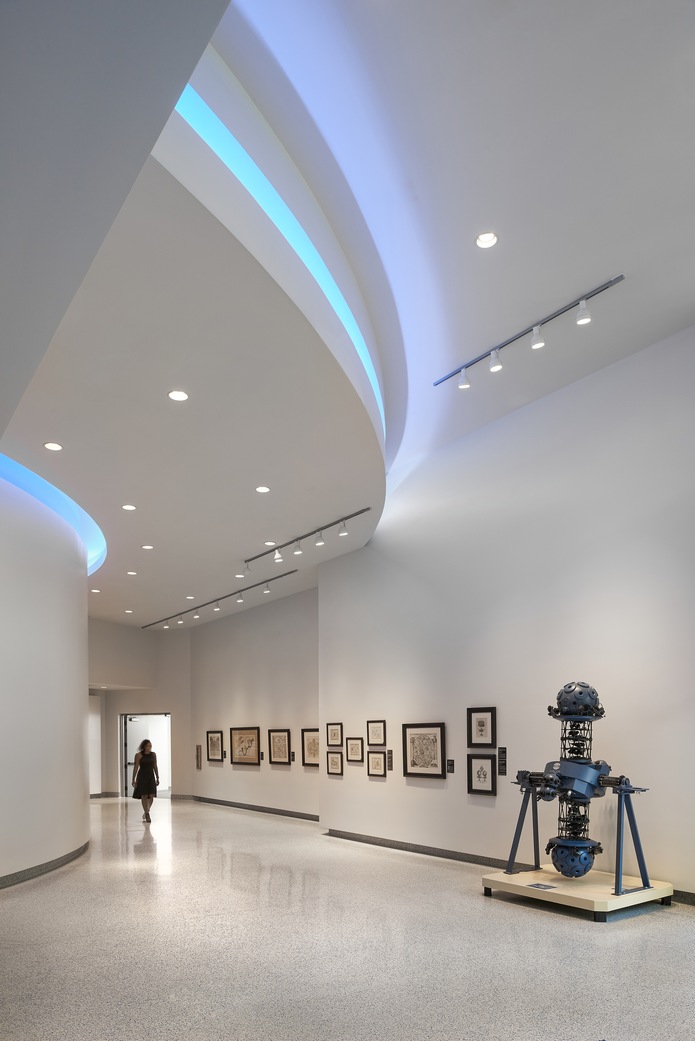 The dome's significant height dictated the lobby ceiling height. Inspired by the mission of the Planetarium, the architectural elments confront the visitor with rising horizontal layers, accentuating the height of the lobby. Where wall and ceiling meet, the planes are pulled apart and glow, further accentuating the scale of space. Architecture is our opportunity to tell a story. In this case, the story of the flood was apocryphal in the Museum's history, and tied to its genus loci, or sense of place.

The new West Wing gallery space more effectively displays the Museum's permanent collection with more useable wall and floor space than the previous structure's inefficient floor plan. The new wing unitues disparate concepts of 1960s and 1990s architecture that remained, raised the building above the flood zone, and healed the Museum together in a single, unified statement. The spirit of the new Museum wing reinforces the inter-connectedness of the arts, sciences, and hsitory through the infusion of iconic form, connectivitiy, and accessibility.

The Museum's vision has evolved over the generations, with a significant collection and a membership that expects the facility to be utilized in many ways. And finally, museums themselves are transitioning from the conventional "antiques" model and becoming vibrant, social gathering places for the community. It was vital, therefore, to create an interior architecture that reflects these different goals. 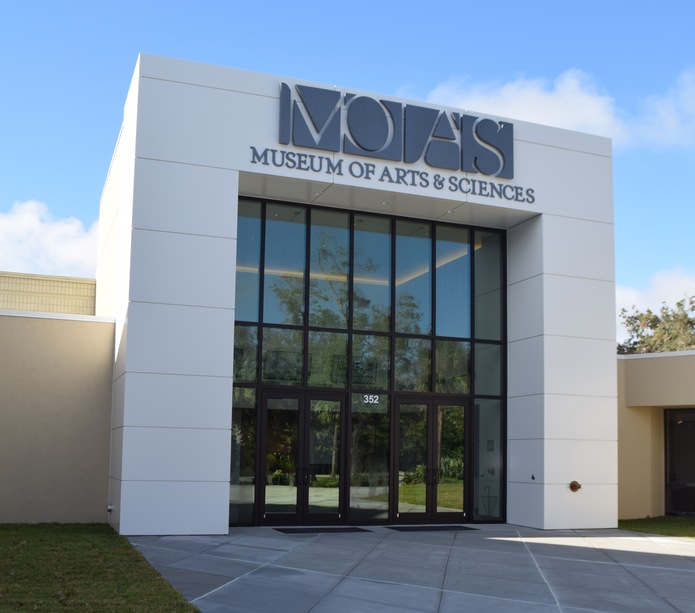 The Guest Services Expansion is clearly identified as the primary entry, resolving itself into an iconic cube shape completely distinct from the rest of the campus. Facing towards the northast, the cube captures light from the sky without the direct Florida sun. The black reception desk and black floors join together monolithcially. A white quartz jacket over the desk acts as an arm, offered to the arriving guest by a well-dressed and gracious host.

With this space, the Museum can accommodate multiple groups of all sizes, befitting its size. The MOAS main facility is complemented by the Cici and Hyatt Brown Museum of Art. These institutions together, along with Tuscawilla Preserve, consitutue Daytona's true cultural capital. The Museum's design started with a hopeful hexagon pattern, but additions and alterations became ad hoc as time went on. By the time of the flood, the Museum's collection was well developed, but its architectural identity had deteriorated. The flood was simply an environmental crisis on top of an existential crisis that was long in the making.

The Museum of Arts & Sciences reconciles its collection of objects through architecture. It expresses its own sense of place and time while being of the earth. With the Museum's collection growing, and its place in the community growing, the facility is now positioned to make the most of the future.

With Florida's ascent as one of hte most populous states in the country, more visitors are expected. Museums today are integral parts of the identity of a city, but the city is undergoing massive social, demographic, technological, and economic shifts. What has kept museums in the forefront, however, is the fact that they represent a cultural hub around which all this change occurs. Inside the Daytona Beach Museum of Arts & Sciences, one can still have the rare experience of viewing an actual thing.

Museums are also changing their relationship with their audiences. The design allows curators to stage exhibits of varying sizes with different levels of interaction - passive, active, or otherwise. The Museum also can be a gathering place, and the galleries can be refitted for many kinds of community gatherings, from classroom to workshop to studio. 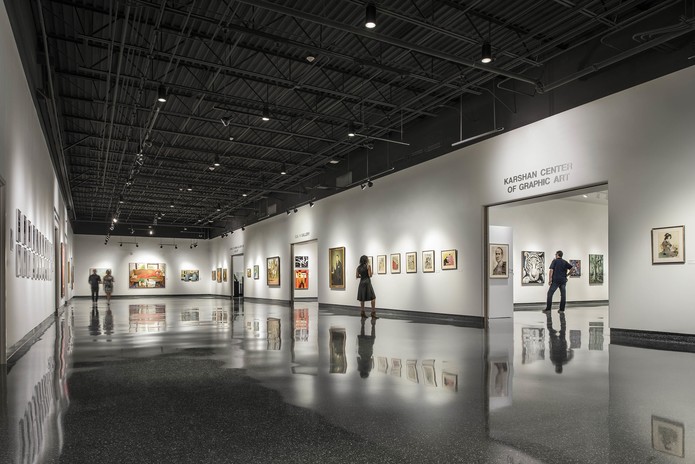 Besides being an architect, I am also an artist. Art itself is changing, with performance art, installations, and multimedia work taking over much of the contemporary art scene. This museum can display new media with ease, and the presentation of art - whether object or experience - it enabled by the facility.

The Museum must perform these functions, while remaining a still, quiet space that is needed now more than ever in our culture of chaos and permanxiety. Whether the Museum is "sustainable," or capable of being sustained, will be judged by our future generations. The true measure of sustainability is whether the choices made today will allow future generations to make choices of their own. We designed this facility with this principle in the forefront of our midns.

This early part of the twenty first century will be remembered as a time of exciting change. The Museum of Arts & Sciences in Daytona Beach is designed around a few core principles to allow freedom to adapt to this change. The institution has gained a facility that identifies it with the heart of the region's rich culture.

Richard Reep, AIA, LEED-AP is an award-winning architect with a history of museum design. He has worked worldwide and currently works with Stantec Architecture, Inc. which acquired VOA Associates in 2016. He practices in Orlando, Florida.