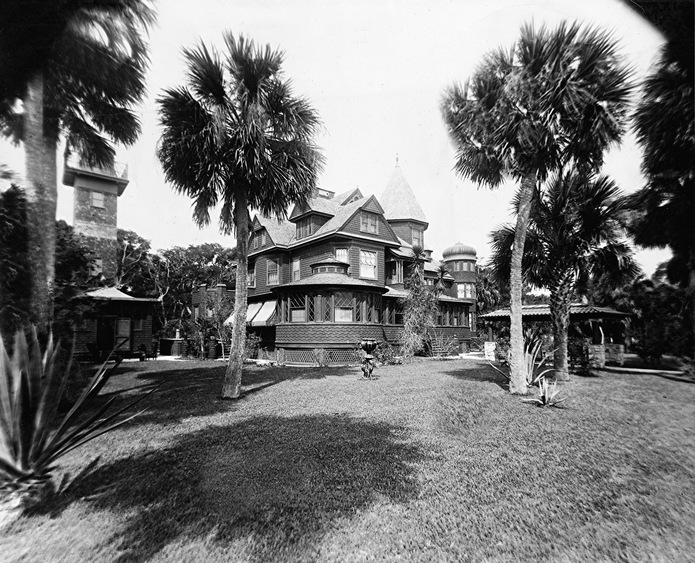 "The Burgoyne House", a watercolor painting by Sandra DeArmas Lloyd, is located in the Volusia County Gallery of the Cici and Hyatt Brown Museum of Art at the Museum of Arts & Sciences. Charles Grover Burgoyne was born on January 3, 1847, in Fairmont, Virginia, now Fairmont, West Virginia. He fought in the Civil War, and after the war arrived in New York City with 5 cents in his pocket. In 1875, he established the Burgoyne printing business there and through hard work he was extremely successful. Burgoyne had many employees in his business, including Mary MacCauley, a proofreader, who he married. 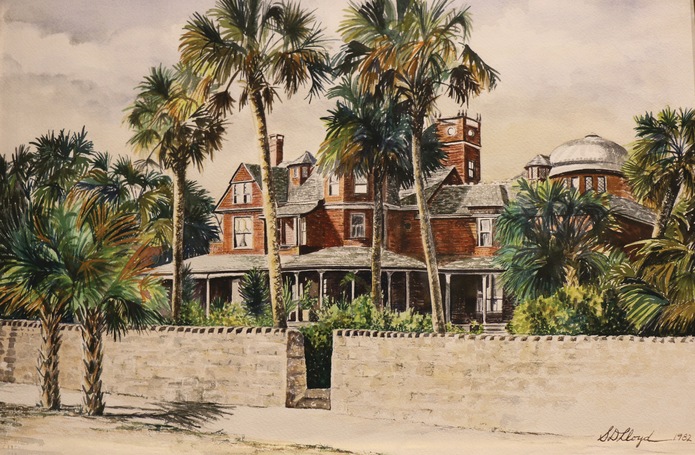 The painting of the Burgoyne House takes us back in time when Daytona, which became Daytona Beach in 1926, was a small quaint city of fewer than 2,000 people. Charles and Mary Burgoyne traveled here in 1894 from New York City by way of the new Henry Flagler railroad. They fell in love with the city and decided that it was where they would retire. The first house that they had built was a large distinctive beach house with a wonderful ocean view at the corner of Broadway and Atlantic Avenue. In 1896, they began construction on their second Daytona house located on the mainland. This was a Queen Anne style mansion and was the largest and grandest home in the city. The property included most of the block of North Beach Street from Bay Street to Volusia Avenue, now known as International Speedway Boulevard, and Palmetto Avenue. The home was designed by Sumner Hale Gove, a prominent local architect, and was built by G.H. Bliven. It was constructed of wood and coquina. Sumner Hale Gove owned a coquina rock quarry and used this long-lasting stone in many of the houses he designed. The mansion was decorated with turrets and stained glass windows and locals called it "The Castle".

A large artisan well was drilled and a water tower constructed. A bog wall was built along the perimeter at the suggestion of Mr. Gove as Charles Burgoyne had a fear of snakes. The small pieces of rock for the wall’s construction were gathered from the open area west of Daytona, now known as Nova Road, and brought to the construction site by mules and wagons. There were two gates in the wall, one facing Beach Street, and the other facing Palmetto Avenue. The inside of the mansion was furnished with the finest Victorian furniture, original oil paintings, Persian carpets, Tiffany lamps, and elaborate silver tableware. The ornately carved woodwork was used throughout the house. The downstairs walls and ceilings were decorated with murals painted by an Italian artist. 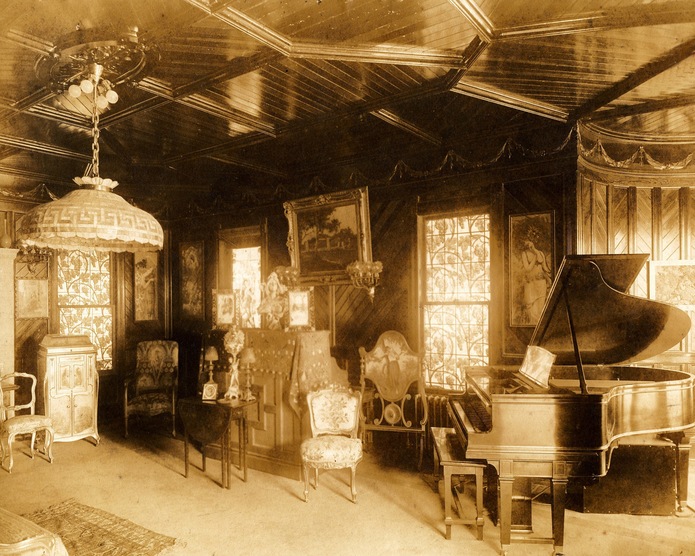 In 1897, Charles Burgoyne was elected Mayor of Daytona. He was a lifelong member of the Daytona Elks Lodge, to whom he donated the life-size elk statue which was prominently displayed in front of the Elks Lodge on Ridgewood Avenue until recently. He also was a member of the Masonic Halifax Lodge #81. The Burgoynes would host members of both organizations at their home.

Although Mary and Charles had no children during their marriage, they had a great love of children. They contributed the funds to provide every student with milk daily. Each year, the grounds of their home would be alive with the laughter of the local boys and girls attending an annual party. The day would include games, cake, and ice cream. Each Christmas all of the school children would receive a box of Whitman's Chocolates as a gift from the Burgoynes. 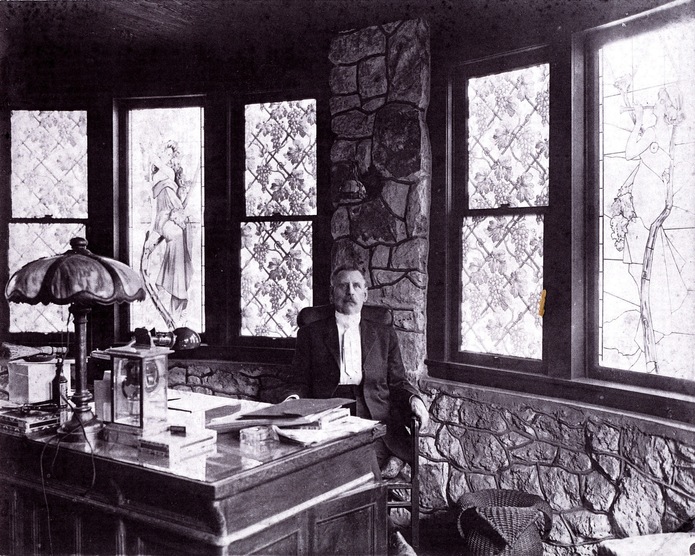 In 1898, Charles had a 65-foot yacht built which had a glassed-in cabin and twin motors. Charles named it "Sweetheart" in honor of his wife. He became a member of the Halifax River Yacht Club and was elected Commodore in 1904. After the election, he was frequently addressed as "Commodore Burgoyne". There were many parties on the yacht as well as frequent Sunday cruises with friends. The yacht, moored at his dock and large boathouse with colorful flags in front of his home, would be decorated every holiday and many of the town folk were invited for boat rides.

The Burgoynes were one of the most prominent families of Daytona. They entertained lavishly, hosting many distinguished guests, such as William K. Vanderbilt, William Jennings Bryan, Mr. Taft, a celebrated organist who was the brother of President Taft, as well as many others. In 1912, Charles and Mary had a large music room built in the north wing of the mansion and installed a Wurlitzer pipe organ for their friend’s entertainment. Charles Burgoyne could not read or play music, however, the organ could be played as a standard console or by paper rolls like a player piano. 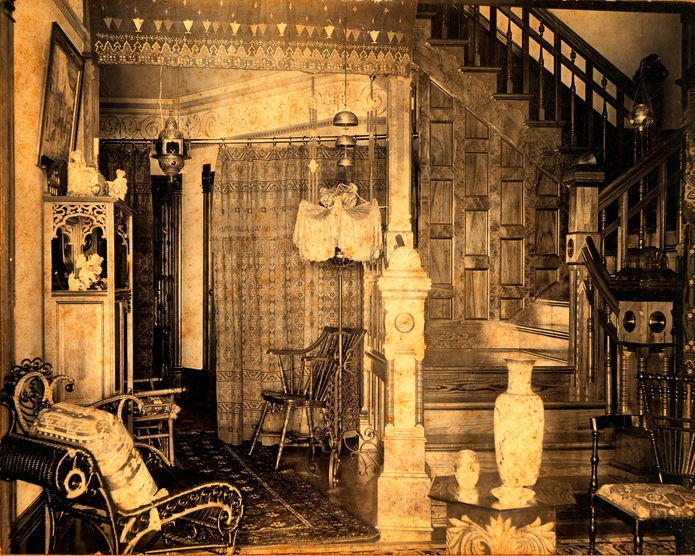 Burgoyne had an outstanding public spirit and a good heart. He paid for all of the street lighting at night for the protection of commuters and contributed money for many civic improvements. In 1914, he built a lighted 10 foot wide paved walkway, the Burgoyne Esplanade, which stretched from Orange Avenue to Bay Street. He has the Casino Burgoyne, a music casino, not a gambling casino, erected on 17,000 square feet of land on the south end of the Esplanade and donated both the Casino and the Esplanade to the city. He also paid for a park pavilion on the Esplanade and free professional concerts for the public that were held at the mansion.

On March 31, 1916, Charles Burgoyne suffered a fatal heart attack on the couch of his living room in the mansion. He is buried in a large impressive plot in the Pinewood Cemetery on Main Street. Mary Burgoyne had a bronze bust of Charles placed near the Burgoyne Casino. The grieving Mary Burgoyne lived in seclusion in the mansion for 25 years until she sold the property and in January 1941, she was moved from the mansion into her nephew's apartment complex, the Touraine Court Apartments on the beachside, with two long-time servants.  The mansion, wall, and all of the outbuildings were demolished and removed, and the property was developed and leased out to 20 commercial businesses. Mary Burgoyne died of pneumonia on February 8, 1944.  She is buried in Pinewood Cemetery, next to Charles Burgoyne.