A Showcase for Florida's Natural History

The Relationship Between the Cici and Hyatt Brown Collection and Nature

Florida, with over 7,800 lakes, 1,700 rivers and streams, and 1,300 miles of shoreline encompassing beaches, tidal marshes, and swamps is a nature lover's dream. The story of this wonderful natural history started long ago with a winding path of unimaginable evolutionary history. 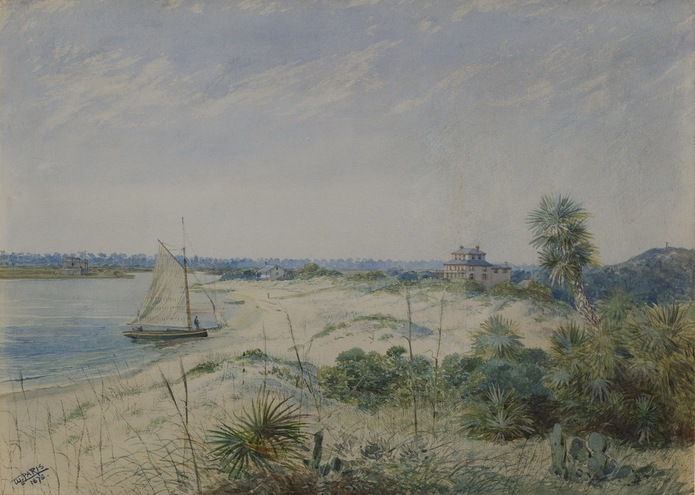 A popular painting from the collection, a small watercolor by Walter Paris titled Fort Matanzas, Florida 1878, showcases the northeastern part of Florida. Here you can see a wonderful depiction of the Matanzas Inlet with a little coquina fort guarding the inlet against the west side of the river. In the right foreground is a well-rendered scene of a barrier island. Florida's barrier islands only formed around 6,000 years ago and are the first defense against tropical storms. Without them, storm surges would penetrate many miles inland. The sandy dunes also tell another story of erosion - one that began in the Appalachian Mountains millions of years ago. As the mountains eroded away, minute particles of rock made their way down rivers and streams, eventually reaching the ocean. These tiny particles from the mountain chain washed up on the Florida platform and became our white sandy beaches. The barrier island vegetation is also uniquely Florida. Within the painting, basking in the sun is an interesting native plant belonging to the Yucca family called the Spanish Bayonet. Also visible are sea oats, now a protected plant because of the way they stabilize the dunes and provide habitat for small mammals. Sea oats are highly adapted to salt, heat, and wind environments. Another plan called the Railroad Vine, common in Florida beach dunes, is a pioneer plant which can cover over 100 feet. it will grow where other plants cannot and have adapted to making its living in the harsh beach conditions.

St. Johns River, Sunset with Alligator, ca. 1887 by Martin Johnson Heade shows Florida's main waterway on the cusp of nightfall. This uniquely slow-moving river is one of four major rivers in the world that flows south to north. Beginning in a swampy area in north Indian River County, it meanders slowly for 310 miles before spilling into the Atlantic Ocean in Jacksonville. The St. John's River is young and was formed only about 5,000 years ago in its current form. Its flora and fauna became the main focus of tourist excursions after the Civil War. Steamboats plied the tannic waters taking winter visitors into the wild and primitive jungle of the Florida frontier. Here, tourists viewed large alligators, picturesque sunsets far from the bustle of city life, and monstrous cypress trees draped with epiphytes. 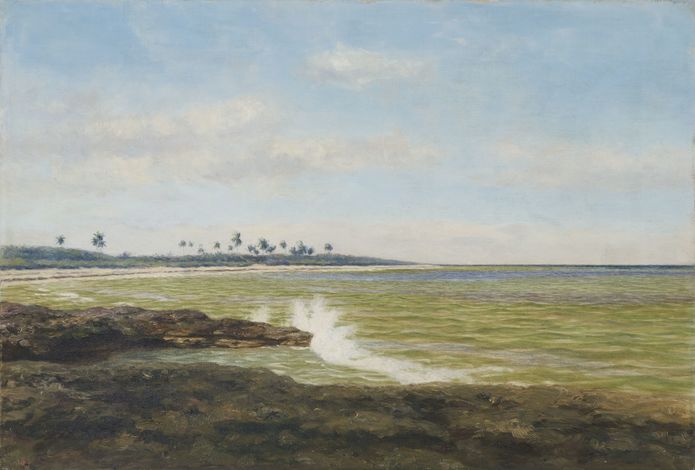 The oil painting, Key Largo, ca. 1900 by Armin Buchterkirch depicts the shoreline of Key Largo and its rocky limestone outcrops. At 33 miles long, it is the largest island in the Florida Keys. This archipelago was once a vast, shallow, and ancient coral reef. Over millions of years, the coral reefs turned into a sedimentary rock called the Key Largo Limestone. In the painting, the rocky shore is depicted because the island has no natural sandy beaches. Sand buildup on the shoreline is prevented due to the offshore reef system blocking any sand deposits. In addition, only small, low energy waves reach the shore, all of which is evident in this wonderful painting. If you were standing on those limestone rocks, you would be able to see different corals and other invertebrates fossilized into the rocks. 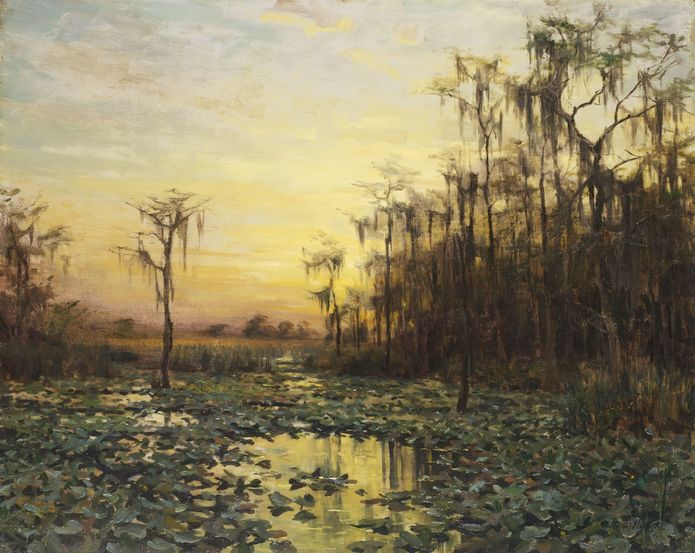 Sunset on the Suwannee River, ca. 1910, by Louis Aston Knight, shows us a calm and tranquil scene during the winter season. Here we see one of Florida's iconic trees, the majestic Bald Cypress, towering in the glow of a falling night. These deciduous trees are water lovers and are related to Giant Sequoias. Bald Cypress trees grow mainly on riverside banks and the edges of swamps. In Florida, cypress knees (structures that form above the roots of a cypress tree) are a common sight. Once through to be an air filtration system, today they are believed to act as a stabilizer for the large and thick trees. Only a few original stands of Bald Cypress trees can be found today, mainly in the Corkscrew Swamp in Everglades National Park. Sunset on the Suwannee River shows us another common plant in the foreground called the Spatterdock. The Spatterdock is an aquatic plant and a member of the Water Lily family. It is an important part of the Suwannee River ecosystem as it provides shade, protection, and food for fish and animals such as beaver, deer, and duck. 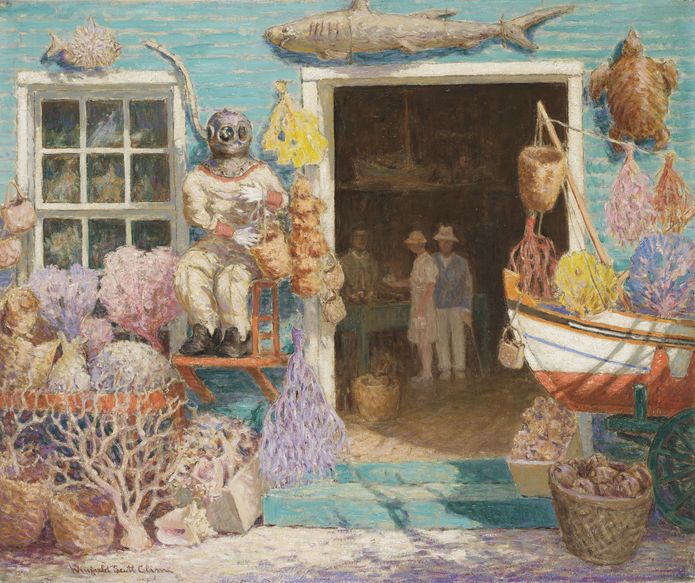 In Windfield Scott Clime's painting, Curios of the Sea, Palm Beach,  ca. 1935, we see a typical Florida seashell and curio shop which were common in the tourist areas of Florida. These stores were popular because tourists always wanted to take home a piece of exotic Florida. Seashells or bits of coral were popular souvenirs. In the bottom right foreground is a basket of sponges. Other exotic sponges are strewn throughout the image. These complex members of the animal kingdom are unique because they do not have any organs, tissues, or a distinct front or back. they filter large volumes of water while feeding on microscopic organisms. A Checkered Blowfish, inflated with fear, hangs in the left corner background. These fish swallow water or air and inflate themselves when they feel threatened. There are over 120 species of blowfish worldwide. They can be found in the Florida mangrove swamps, seagrass beds, and tidal creeks and if caught, are not meant to be eaten as they are poisonous.

The paintings from the Cici and Hyatt Brown Collection are remarkable in many ways. From these paintings, the observer can learn about Florida's natural history and ecosystems. You can view these beautifully rendered ecosystems from all over the state without having to travel in space or time to see them. They capture images of Florida that are becoming harder to find. These paintings allow us to reconnect with nature and learn more about the importance of Florida's varied fragile ecosystems.