North Wing: A Treasure Trove of Decorative Arts and History

The many galleries of the Museum's North Wing are full of decorative and fine arts that demonstrate the ever-changing tastes of societies from around the world. Each object contains symbolic value and reflects important attitudes and realities of the society where it was produced. The objects on display have many purposes: tell a story, commemorate an important event, show a religious ritual, create a social commentary, or record visual data. Many visitors may not be familiar with some of the astounding masterpieces residing in the Museum’s North Wing that reflect ideas of their place in the web of their history.

A stroll into the Kenneth Worcester Dow & Mary Mohan Dow Gallery of American Art is an amazing walk through the material cultural history of our country. Beginning with the pilgrim-age with pieces as early as 1694 and ending with objects from the Victorian Era, it represents some of the best painters and cabinet makers in American history. The Helena and William Schulte Gallery of Chinese Art represent exemplary pieces from the Museum’s Chinese collection with the oldest man-made pieces of art dating back to 240 B.C. The Helene B. Roberson Visible Storage Building is one of only a handful of open storage exhibits in North America and contains nearly 6,000 objects from a diverse cross-section of the Museum’s amazing decorative arts collection. The Anderson C. Bouchelle Study Center and Gallery for International Decorative Arts houses important European decorative pieces. 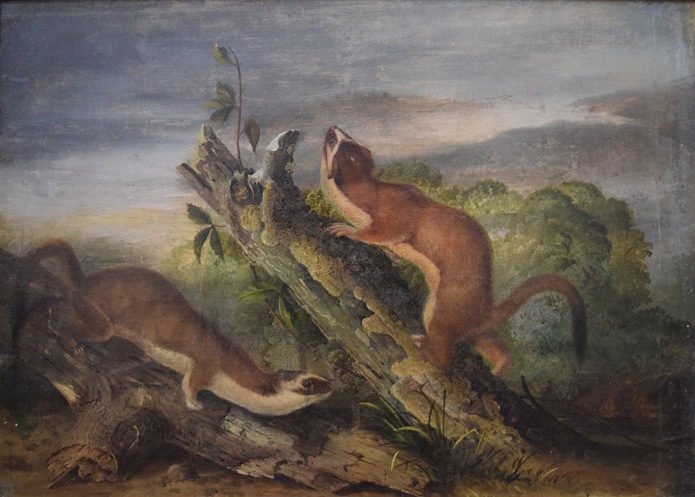 In the Dow Gallery of American Art, you will discover an amazing oil painting by John James Audubon titled, Townsend’s Weasels 1842, an oil on canvas. Audubon, the great painter, and printer of the Birds of America created our country's most famous art book. He was an artist-naturalist who raised bird portraiture to a fine art. After Audubon became famous for his Birds of America, he and his son, John Woodhouse, took on a new challenge in the early part of the 1840’s to paint and describe all of the mammals of North America. The book entitled, The Viviparous Quadrupeds of North America, contained some 150 images but is smaller in scale. Audubon did not render many oil paintings, and when he did, it was to raise money to enroll subscribers for his art books. This painting is a preliminary study for a plate in Audubon’s second volume of nature studies for this series. The Museum’s Townsend’s Weasels, 1842 was a gift from Miss Mary Eliza Audubon (John J. Audubon’s granddaughter) to Rosalie Paul.  Rosalie lived with the Audubon’s and attended the school in their home off Riverside Drive, New York. They called her their adopted daughter. This oil painting was a wedding gift to Rosalie at the time of her marriage. The fact that the Museum owns and displays an original Audubon oil painting is quite remarkable. Townsend was Audubon’s trapper and he painted this oil painting depicting two weasels in a playful disposition. It is actually the same male weasel painted twice. What makes this piece a one-of-a-kind is that if you look closely at the weasel in the lower left section you will see it has two tails. Originally, Audubon did not like the placement of the original tail so he painted over it and placed a new tail higher up on the hip. Now, over the many years, the original paint has shown through a process called pentimento and now shows the glaring mistake of two tails on this weasel. 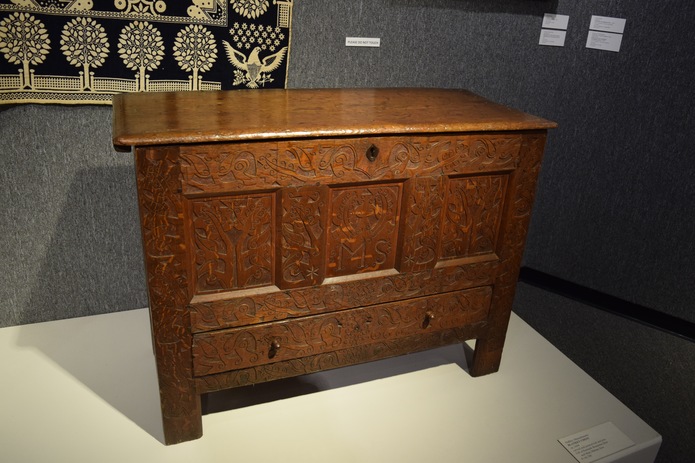 In the 17th century, a person known as a joiner was also known as a cabinet maker. The word carpenter was not in popular usage until the 1800’s. Chests were usually made to order and sometimes they were initialed when bestowed as gifts. On display in the Dow Gallery of American Art is a beautiful 1694 dowry chest with the initials MS. This rare pilgrim chest is a Hadley Chest named after the location it was discovered (Hadley, Massachusetts), and there are less than 150 of them known to exist. They were discovered by a collector in 1898 and were created by cabinet makers within a 750-mile area. The initials stand for Mercy Smith who the piece was originally commissioned for. This oak chest stands 3 ½ to 4 feet tall and has a pine top. Kenneth Dow purchased this rare chest in 1939, and now it sits at the entry of the gallery as a sentinel to the beginning of a long and glorious history of American cabinet makers. 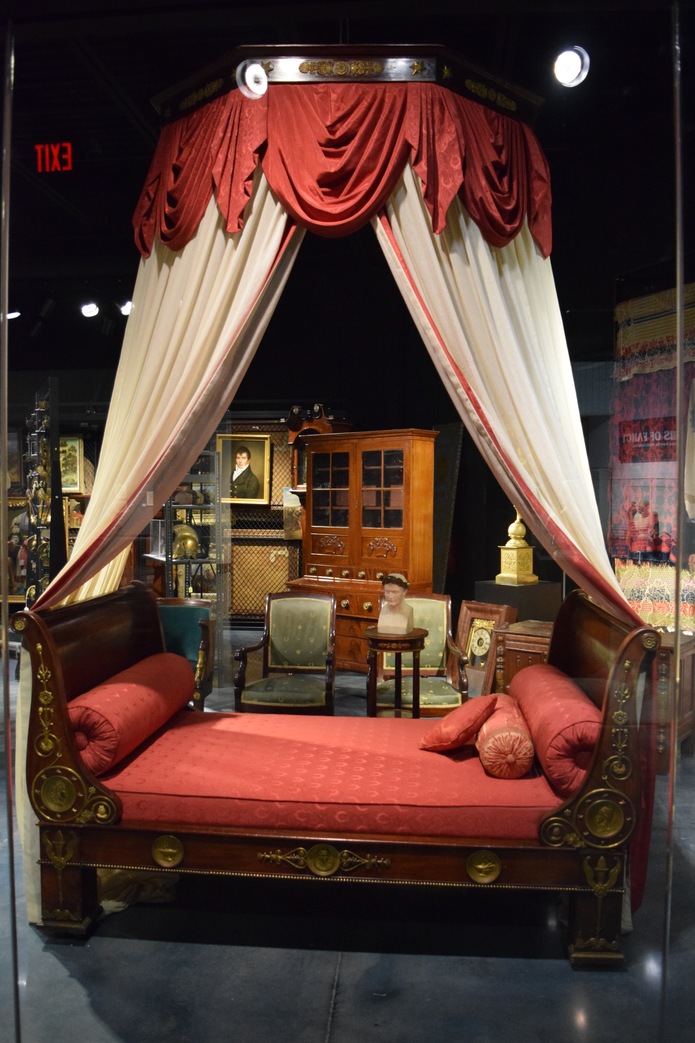 Emperor Napoleon Bonaparte's bed that resides in the Helene B. Roberson Visible Storage Building at the Museum of Arts & Sciences

The Helene B. Roberson Visible Storage Building is a must-see walk through human history. Upon entering the amazing collections, your eye is caught by a fancy looking bed. This is no ordinary piece of furniture as it once belonged to Emperor Napoleon Bonaparte and resided in his private personal chambers at the Palace of Versailles. The classic Empire style of this block-like bed is deeply rooted in the neo-classical fashion that was so en vogue during Napoleon's reign. The bed dates to c. 1810 and would have been pushed up against a wall with drapes dangling down each side. This Empire style bed is the forerunner of the American sleigh bed common today. How did the Museum acquire this piece? The bed was sold at auction to New York newspaper magnate, William Randolph Hurst, and then auctioned years later by Sotheby’s and won by Kenneth Dow. Kenneth loved all things French, and he eventually donated it the Museum in 1989. 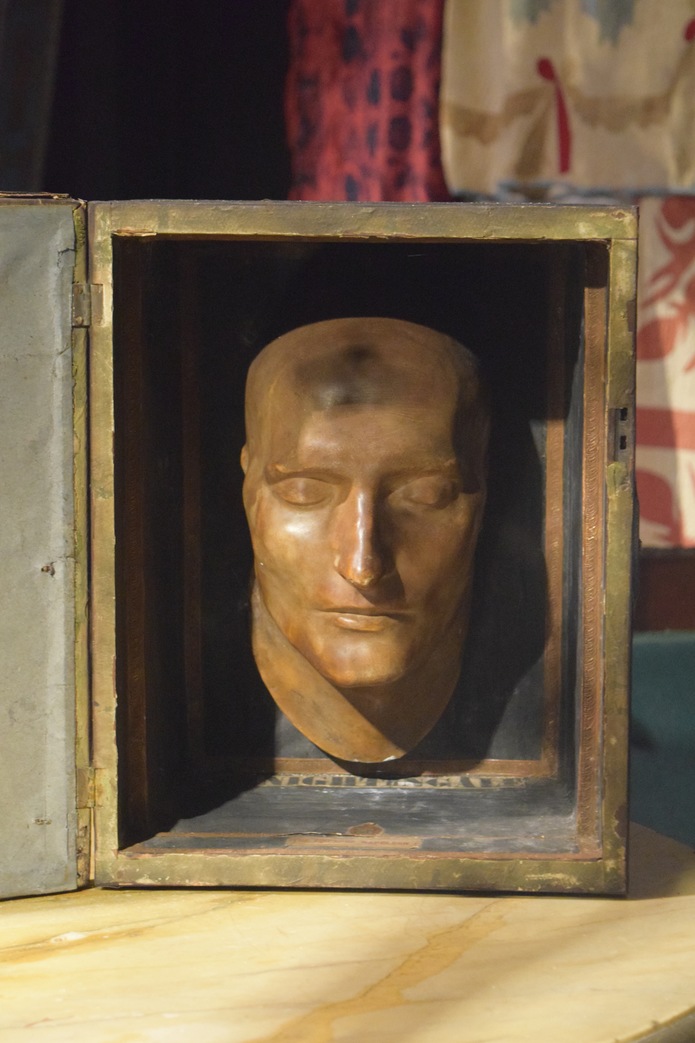 Emperor Napoleon Bonaparte's death mask that resides in the Helene B. Roberson Visible Storage Building
at the Museum of Arts & Sciences

Another amazing treasure sitting next to Napoleon's bed is a rare death mask of the famous general. If you want to see what Emperor Napoleon really looked like, you can peer inside a non-descript box and see the plaster death mask of the famous emperor created two days after his passing. Napoleon died May 7, 1821, at age 51 on the Island of St. Helena with doctors from the United Kingdom and France in attendance. During the time of Napoleon Bonaparte, it was customary to cast a death mask of a great leader who had recently died. A mixture of wax or plaster was carefully placed over Napoleon’s face and removed after the form had hardened. From this impression, subsequent copies could be cast. His eyes are closed, lips slightly parted, and his shaven head is tilted backward, resting on a pillow garnished with a tassel at each corner. There are only a handful of these death masks known in the world.

In The Helena and William Schulte Gallery of Chinese Art sits a small yellow porcelain rice bowl. It appears simple but it is actually incredibly important. It is one of the rice bowls belonging to the court of the last emperor of China, Aisin-Gioro Pu Yi (b. 1874- d. 1912). In Chinese culture, the color yellow is long associated with royalty. This color was reserved exclusively for the emperor. The emperor even wore yellow robes. Also, etched on the side of this rare artifact is a five-clawed dragon. This symbol was also reserved only for the emperor. A dragon with four claws was reserved for nobles and three-clawed dragon for commoners. 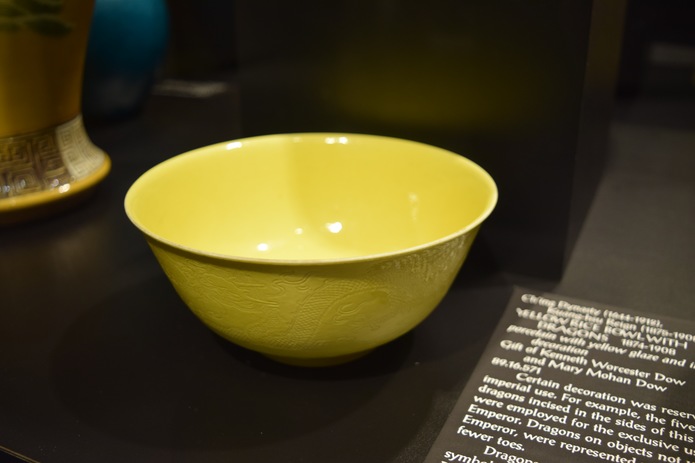 Two more amazing artifacts located in the middle of the Schulte Gallery are the Chinese Writing Folios. One is a female folio and the other is for males. The two bound painting books were compiled at the same time and represent the differences between men and women. The men’s folio shows a combination of calligraphy with images of philosophers, kings, and court officials. This painting folio was produced for wealthy educated men and bureaucrats. The women’s painting folio depicts images of women enjoying daily life and children playing.  What makes this so interesting is that on the opposite page of the painting it remains blank with no writing whereas the male folio includes Chinese characters. Women were not encouraged to read or write. These amazing folios were produced as a series of paintings from the 15th through the 18th centuries. 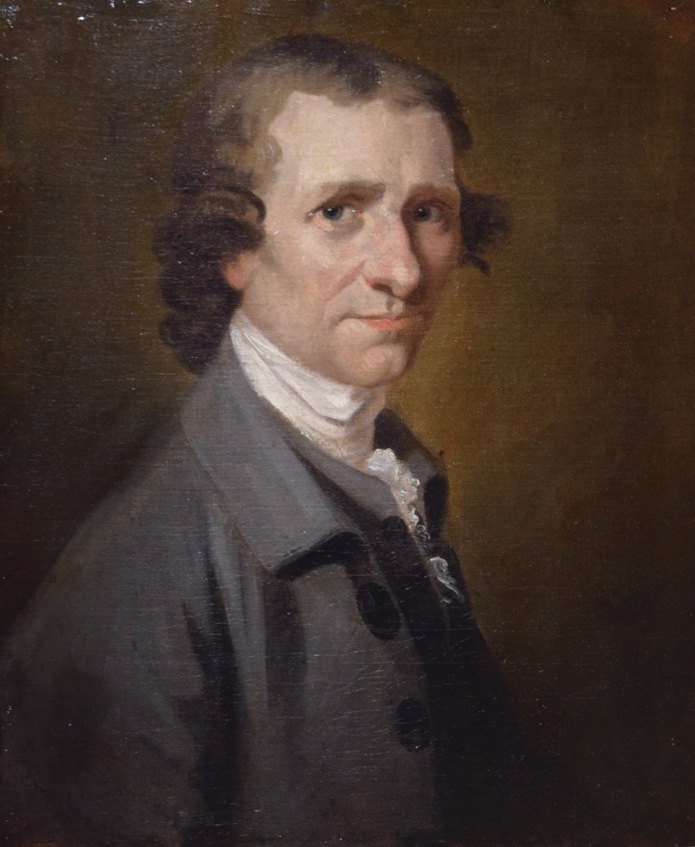 A beautiful but mysterious portrait of one of America’s founding fathers, Thomas Paine (c. 1800), resides in the Anderson C. Bouchelle Study Center and Gallery for International Decorative Arts. Philosopher, political activist, theorist, and revolutionary, he wrote the famous and powerful pamphlet read by every rebel, Common Sense (c. 1776). Kenneth Dow purchased the portrait from a Mr. Abbott, a local London art dealer, in the summer of 1951. This important portrait is attributed to English painter, George Romney (b. 1734- d. 1802) who was the most fashionable painter of his day. In an interesting twist, there is evidence that this portrait could be attributed to another well-known American artist, Matthew Pratt. It could be that George Romney painted his portrait of Thomas Paine off of Pratt's painting which resides at Lafayette College in Easton, Pennsylvania. Unfortunately, the Museum’s painting lacks a signature, as does Pratt’s, but ours appears to be older than the Paine portrait at Lafayette College. Could it be that our painting of Thomas Paine is by Mathew Pratt and the one at Lafayette College is a later copy by Romney? For now, our attribution lies with our portrait being the “lost” portrait of Thomas Paine by George Romney because of certain stylistic characteristics. Until further evidence comes forth clarifying this mystery, it is a must-see painting of this important founding father!

The next time you are at the Museum, do not forget to stroll into the North Wing and observe these amazing pieces of fine art. It is important to realize that these examples are only just a few of the overwhelming amount of masterpieces found throughout the North Wing. Spend time in these amazing galleries and investigate, discover, and find your own treasures that speak to you!