When you stare at the sky on any given night, many are hopeful to spot something spectacular, or strange, or even surprising. If you consult any astronomer or avid stargazer, they will tell you the sky always has an abundance of celestial wonders to discover no matter the date. 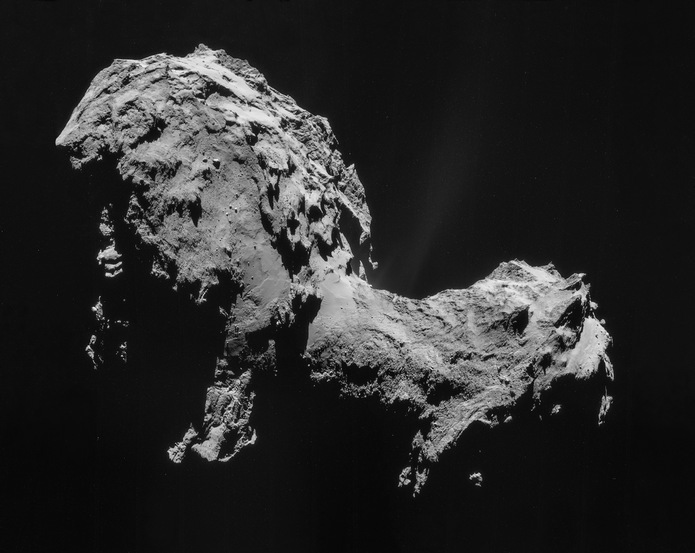 Comets have even been visited and landed on by spacecraft over the years. This is a view from the European Space Agency spacecraft, Rosetta, that intercepted and eventually dropped a lander on a comet 67P/Churyumoy-Gerasimenko in the fall of 2014. This view shows that comets are mostly dusty, rocky objects with ices embedded within it. A few faint gas streams can be seen ejecting material from the comet nucleus in the image center. Image credit: ESA/Rosetta/NAVCAM

But for the casual observer, there is nothing like the sighting of a naked-eye comet. These wispy, glowing apparitions have continually captured our imaginations and curiosities as they make seemingly random appearances in the sky. For early human history, comets' unpredictable nature have made them seem like harbingers of war, famine, or - insert your own doom-and-gloom scenario. Even the word comet comes from an almost whimsical and mythical idea, deriving from the Latin word cometes, which has Greek origins relating to "long hair," or meaning "long-haired star."

The first half of 2020 has been a fascinating time for these "long-haired stars," as several comets have entered the inner Solar System. This has made them relevant again, as many are reminded of their existence when their close proximity becomes a potentially exciting observational opportunity.

These small, rocky, and icy celestial bodies are usually very dim and extremely difficult to detect, eventually making dramatic entrances as they heat up and glow as they get closer to the Sun. What were initially thought of as "dirty snowballs," and more recently described as "icy dirtballs" as well, comets are very old and are actually the leftover building blocks of the Solar System.

Think of the foundation of the Solar System like baking a cake, with the brunt of the ingredients forming the largest components or tiers. In this metaphorical Solar System cake, this would be the Sun, planets, and moons. But what about all the leftover materials that never made it into the cake on the kitchen counter, utensils, and bowls? For the Solar System, many of these leftover materials are comets, and instead of their constituent materials being composed of baking ingredients, they are instead made up of dust, methane, ammonia, carbon dioxide, water vapor, and other frozen gases.

At least as numbers go, comets are not rare. There are thousands of these objects in the inner Solar System with small orbits known as short-period comets (less than 200 year-long orbits), and a large number of long-period comets in the outer regions of our planetary neighborhood. Even farther out within a couple of light years from the Sun, there is a giant spherical collection of comets known as the Oort Cloud, with possibly trillions of these objects.

In December 2019, a near-Earth asteroid detecting observatory in Hawaii called the Asteroid Terrestrial-impact Last Alert System (ATLAS) observed a comet on its way into the inner Solar System. Eventually the Comet ATLAS - named after the aforementioned observatory - it became an exciting prospect for naked-eye observing as it quickly brightened in the following months in northern skies. Some people were even declaring this could be the next great comet - a status given to extremely bright comets in our sky.

Great comets are the type of objects that everyone hopes to see often in their lifetimes. Famous great comets include Halley's Comet, Comet Kohoutek, Comet Hale-Bopp, and more recently, Comet Lovejoy. These are actually fairly rare, on average only appearing about once per decade. 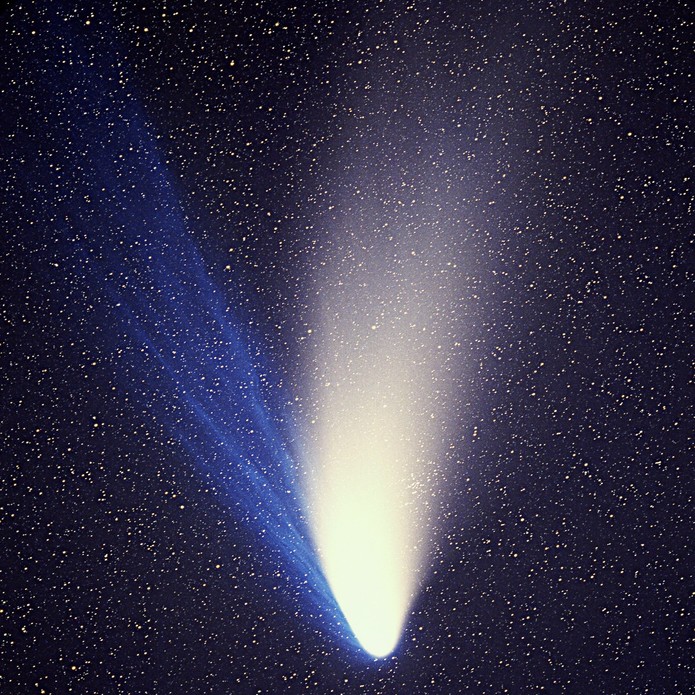 The brilliant Comet Hale-Bopp (C/1995 O1) is imaged here in April 1997 from the Johannes-Kepler-Observatory in Austria.
This was the last great comet visible in the northern hemisphere, and could be seen for about 18 months to the naked eye.
Two distinct tails can be seen in the image: A gas or ion tail on the left and dust tail on the right.
Image credit: E. Kolmhofer, H. Raab; Johannes-Kepler-Observatory, Linz, Austria

The problem is, comets are notoriously unpredictable and have been a frequent source of frustration and disappointment for those hoping for a big show from them.

As these very dim, icy chunks of rock barrel in closer to the Sun, they heat up form the solar radiation and begin to outgas and vaporize, developing a hazy orb called the coma that envelopes around the comet nucleus. The outgassing can be a very chaotic process and can make comets tumble in odd ways. The outgassing fluctuates over time and can increase or decrease, stopping entirely if the comet is depleted, or ramp up and even break itself apart.

This has made comets through history very difficult to predict as they evolve.

And to confirm this predictably unpredictable nature of comets, as soon as Comet ATLAS got closer to naked-eye possibility in March, by April it unexpectedly started to show signs of dimming.

Astronomers started to notice a broadening of Comet ATLAS's nucleus, a sign that disintegration or fracturing was occurring. This was eventually confirmed in mid-April by the Hubble Space Telescope when only its powerful eye could see the comet has broken up into a half dozen smaller pieces.

The Hubble Space Telescope confirmed that Comet ATLAS had broken up with these observations made in late April 2020.
A half dozen or more pieces were seen to split off, and each fragment was given a letter to denote them.
This was the first time a comet break-up had been seen in this much detail. Image credit: NASA, ESA, STScl and D. Jewitt (UCLA)

This, of course, was dissappointing for comet watchers, but not surprising to astronomers who have routinely seen this scenario play out time-and-time again. This was probably even more of a let down for northern hemisphere dwellers since the last great comet visible from this half of the globe came with Hale-Bobb in 1997. The last two great comets were that of McNaught and Lovejoy in 2007 and 2011 respectively but were observable in the southern hemisphere. 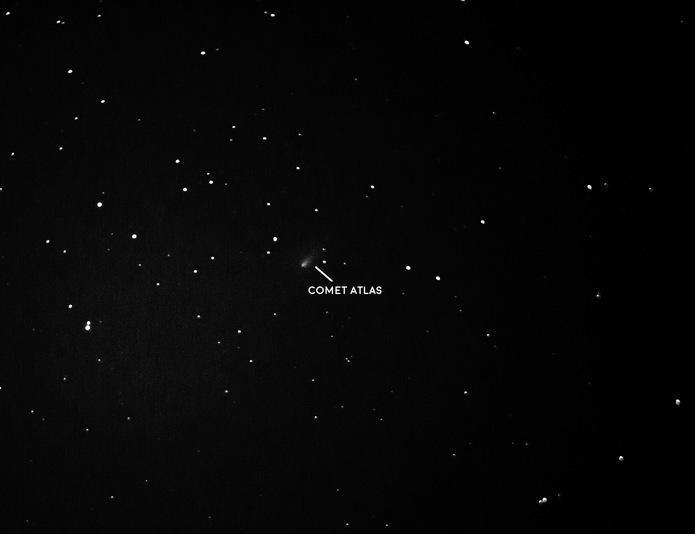 This still image from a time-lapse of Comet ATLAS (C/2019 Y4) was taken on April 28, 2020, before it broke apart and dimmed dramatically. Orginally discovered in December of 2019 by a near-Earth asteroid seeking observatory in Hawaii, this was a view through a small telescope while Comet ATLAS remained too dim to naked eye viewing. A small coma and tail can be seen stretched away from the nucleus.
Image credit: Seth Mayo/MOAS

Although Comet ATLAS was broken up by the increasing solar radiation it has encountered, the disintegration did provide scientists an interesting look at comet evolution that had never been seen before.

Being ancient time capsules, comets have provided a window into how the distribution of molecules came to be on the planets and moons. Some of Earth's water may have come from early cometary bombardments (this is still highly debated) and even the ingredients for life could have been seeded by them. Amino acids, the basic components of DNA, and complex organic molecules have been discovered on various comets.

As Comet ATLAS began to fade away for at least naked-eye viewing, fortuitously, another comet came to the rescure right on cue.

This time it was Comet SWAN. Discovered in late March by amateur astronomer Michael Mattiazo, who had been sifting through observations made by the Solar Wind ANisotropies instrument (SWAN) oboard NASA' Solar and Heliospheric Observatory (SOHO) that studies the Sun. The SWAN instrument is meant to detect hydrogen in the Solar System by utilizing ultraviolet light, which comets happen to emit as they are heated by the Sun.

Images of Comet SWAN captured through telescopes around the world show a very long ion tail stretching out from the nucleus in late April and early May.

Comets typically have two types of tails: icon and dust tails. Ion tails come from the gaseous vapor that is being ejected by the comet nucleus as volatile materials like water, methane, and carbon dioxide are heated by the Sun and begin to glow. As they move outward from the nucleus, these volatiles are then pushed away by the Sun's constant solar wind of charged particles. Ion tails always face away from the Sun and follow along its magnetic field lines.

Tiny bits of rocky debris are also brough up as the gasses are vaporized, creating dust tails that reflect sunlight instead of glow. These types of tails also generally point way from the Sun but tend to curve toward the orbit of the comet.

This can allow the two types of tails to point in slightly different directions as the comet moves in and around the Sun. The tails are the source of the "long-haired" description given to these objects by ancient observers.

Comet SWAN followed a trajectory in the sky moving very low in the east before sunrise. When the comet was first discovered it was mostly a southern hemisphere object, but through May, as it moved northward along the early morning eastern sky, it slowly became visible to observers in the northern hemisphere towards the northeast.

By May 27 Comet SWAN made its closest approach to the Sun, known as perihelion, at about 40 million miles from the surface.

As of the writing of this article, Comet SWAN was still in naked-eye territory, but was not thought to reach great comet status at any point. 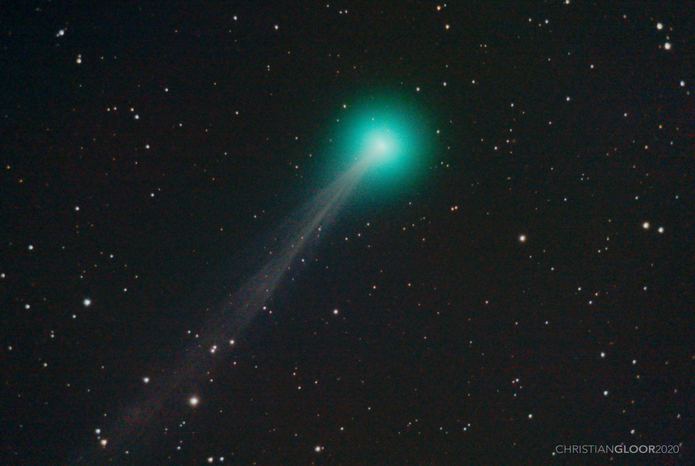 Comet SWAN was discovered by amateur astronomer Michael Mattiazo, when he analyzed images from the SWAN instrument onboard the SOHO solar space observatory. A very bright coma - created by the ices in the nucleus being vaporized and outgassed - can be seen as a greenish orb with a tail streaming away from the Sun. Image credit: Christian Gloor

To add to the busy comet manifest of 2020, in March another comet was discovered by NASA's orbiting telescope called the Near-Earth Object Wide-field Infared Survey Explorer (NEOWISE). Comet NEOWISE brightened considerabily in April and has prospects of being a naked-eye comet by the summer, and moving far enough away from the Sun by July to possibly be seen in the early morning to the east-northeast.

With all these comet viewing opportunities, it is quite interesting to note how all of these objects were discovered in such diverse ways. It is a reminder that there is quite an abundance of comets coming from different directions and locations throughout our Solar System, and a whole slew of observatories and techniques are needed to detect them all.

Even though the comets this year may have not lived up to their great comet cousins of the past, they have all shown to be interesting pieces of the Solar System history with their own fascinating characteristics and each contributing to scientific study in unique ways.

Time will only tell what the rest of the year will bring for thse unpredictable objects. Keep hoping and looking up!