Over and Out: Mercury on the Move this Fall 2019

Mercury on the Move

The first planet from the Sun in our Solar System will put on a show this fall. In a cosmic lineup that only occurs 13 or 14 times per century, the tiny planet Mercury will be crossing the Sun from Earth’s vantage point on November 11, 2019.

Since Mercury will be making itself known by the crossing – or transiting – of the Sun in 2019, this provides an opportune moment to explore the small, yet fascinating world, in a little more detail. 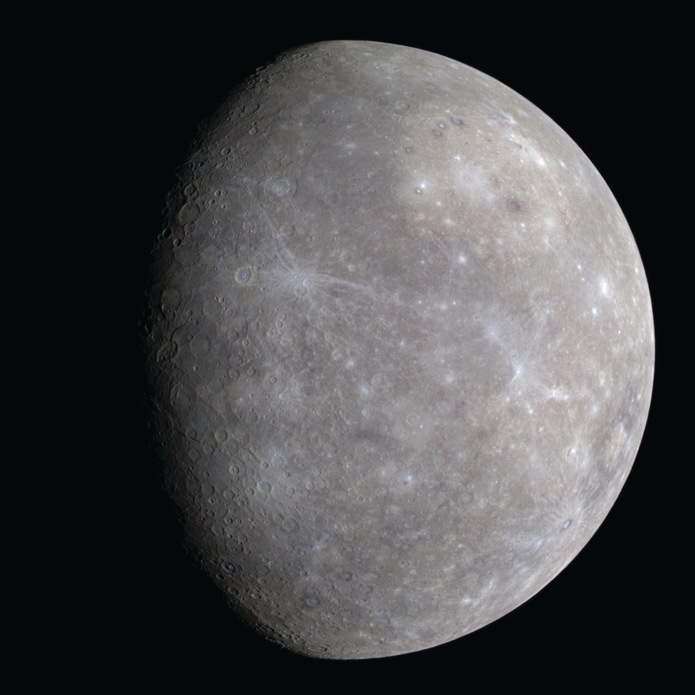 Mercury has a close resemblance to our own moon with its numerous craters and gray coloring. This image was taken by NASA's Messenger spacecraft in 2008 as it was receding from mercury. The innermost planet in our solar system is just a bit bigger than our moon at about 3000 miles in diameter. Image Credit: NASA/JPL

Compared to Earth, Mercury orbits a bit more than a third of the distance from the Sun and is roughly a third its size. Due to its close proximity to our nearest star, Mercury feels a powerful gravitational pull that brings it around the Sun in just under 88 Earth days. This means that every Earth year you get four more Mercurian years older.

The speedy nature of Mercury is the reason for its name. Since ancient Roman times, Mercury was well known as one of the five prominent planets that danced around the sky throughout the year, doing so faster than any other planet. This inspired the Romans to eventually name the planet after their fastest traveling god, Mercury, whose winged sandals allowed him to perform his godly messenger duties at lightning pace.

The swift orbit of Mercury – at a blazing speed of 106,000 miles per hour – and its tight vicinity to the Sun, also means that the planet can be quite challenging to follow. Many observers of the sky may not be aware they actually spotted Mercury since it can resemble a very bright, non-twinkling star, that doesn’t stray too far from sunset in the west or sunrise in the east. Night to night, Mercury changes its position more drastically than any other planet, and careful observation is usually necessary due to the Sun being situated nearby.

Dating far back to when early observers tracked Mercury across the sky, there has been much speculation as to what the planet’s appearance would be.

It’s easy to assume that Mercury is glowing in a fiery red color as it is baked by the intense radiation from the Sun close by. This wouldn’t be a bad assumption since the Sun in Mercury’s sky is 2.3 to 3.4 times bigger (this size varies due to highly elliptical, or oval-shaped orbit) than the Sun as seen from Earth, and brings temperatures up to 840 degrees Fahrenheit on the dayside. Although, the night side is far cooler, dropping down to minus 275 degrees Fahrenheit – a result of there being practically no insulating atmosphere covering the planet.

The reality is that Mercury looks just like our own Moon. This can somewhat be seen through telescopes on Earth, but is an exceedingly difficult task due to the Sun’s blinding glare.

The planet first came into full view when the earliest spacecraft to visit Mercury, NASA’s Mariner 10 (1974-1975), made a series of flybys over its surface while taking many close-up images. What was first seen by the spacecraft were the recognizable pockmarks of numerous craters, scattered on a mostly gray and dusty surface. Just like our Moon, the extraordinarily thin atmosphere doesn’t disintegrate the meteors that strike Mercury’s surface, allowing for extensive cratering. 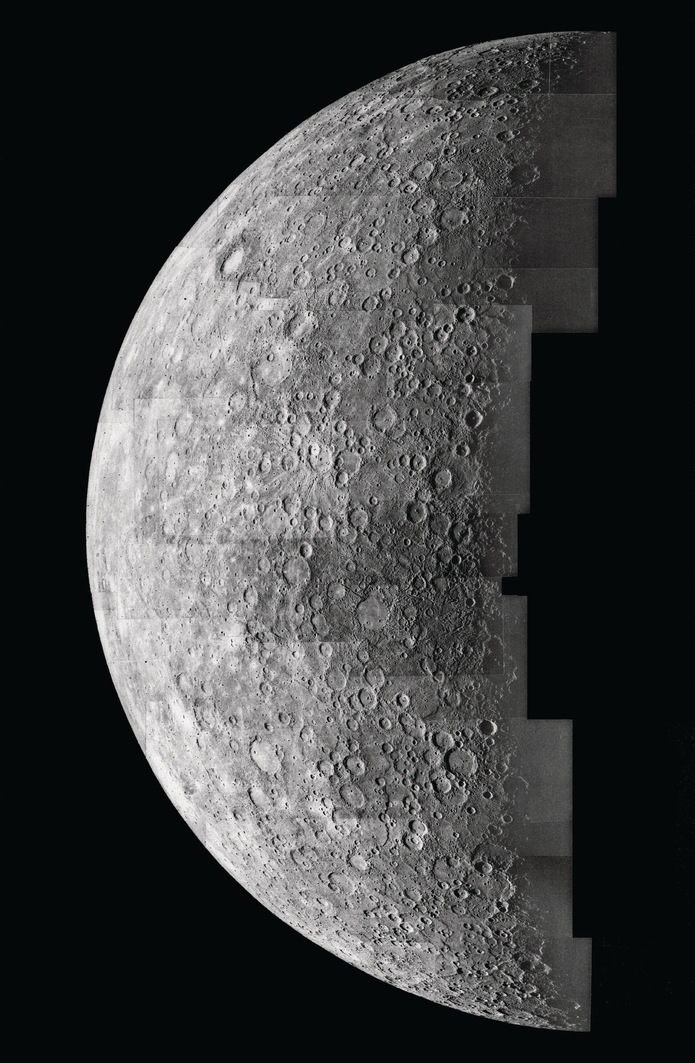 A series of images were taken by NASA's Mariner 10 spacecraft to compose this hemispherical view of the surface of Mercury. The composition was taken in the mid-1970s at about 125,000 miles away. Image Credit: NASA/JPL

Mariner 10’s images of the planet also revealed massive scarps, or cliffs, stretching over many different areas. These geological features were later found to be the result of ongoing shrinking of Mercury as its large iron core cools and contracts, crunching the planet down more and more, and resulting in many cliff-like features. This likely results in Mercury-quakes occurring as the crust shrinks over time.

By the end of the brief Mariner 10 mission, the spacecraft was only able to image about 45 percent of Mercury’s surface since the planet rotates very slowly.

The second and last mission to visit Mercury was that of NASA’s MESSENGER (Mercury, Space Environment, Geochemistry, and Ranging) spacecraft, that spent time between 2008 and 2015 studying the planet.

The completed map of Mercury revealed to scientists the extent of ancient volcanism that occurred billions of years ago and a more accurate understanding of the history of the planet.

One of the major findings from the mission includes the detection of carbon-containing organic compounds on the surface, water found in the highest levels of the Mercurian atmosphere, and even water-ice on the poles.

Water – in any form – found on the closest planet to the Sun was one of the major surprises, revealing that the life-sustaining molecule is more abundant in extreme environments than previously thought. The water ice found is preserved in permanently shadowed craters that exist on both poles, which may have derived from icy comet impacts or water vapor that outgassed from the planet’s interior.

On April 30, 2015, the MESSENGER mission came to an end as the spacecraft ran out of fuel and plunged into the planet’s surface.

The next mission to Mercury is already on its way, having launched on October 20, 2018, and is called BepiColombo – a joint venture between the Europe Space Agency (ESA) and the Japan Aerospace Exploration Agency (JAXA). Each agency has their own spacecraft that are coupled together: the Mercury Planetary Orbiter and the Mercury Magnetospheric Orbiter. These orbiter’s will arrive at Mercury in December of 2025 and will provide a next-generation study of this inner world. 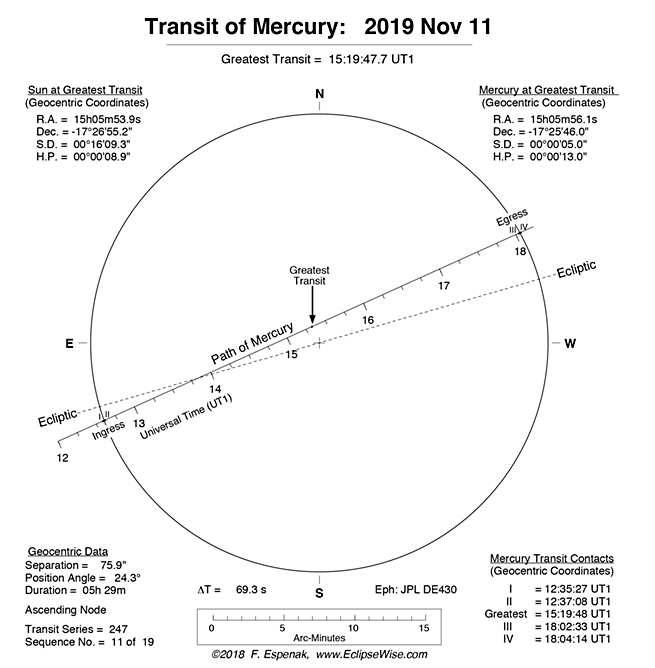 Diagram of the November 11, 2019 transit of Mercury. The left eastern edge of the sun is where Mercury will cross first, starting at 7:36 a.M. Est. Mercury will be at the center of the sun at the greatest transit point at 10:20 A.M. EST. At 1:04 P.M. EST, Mercury will leave the sun's disk near its northwestern edge. Image Credit: Fred Espenak/www. Eclipsewise.com

The Transit of Mercury

On November 11 of this year, the Sun, Mercury, and Earth will line up in the exact configuration for a transit to occur. Since Mercury’s orbit is tilted at a seven degree difference to Earth’s orbit around the Sun, planetary lineups such as these don’t come around often – occurring only 13 or 14 times per century.

This event can actually be thought of as a very small eclipse, but unlike solar eclipses brought on by our Moon, Mercury is much farther away and has a far smaller angular diameter than the Moon, meaning that the planet will only cover a very tiny portion of the Sun.

The last time this occurred was as recent as May 9, 2016, but transits of Mercury have been closely observed and predicted for hundreds of years.

Transits of both Mercury and Venus (only possible for these innermost planets) across the Sun have not only been observed for their interesting celestial appearance but were initially studied to ascertain a more accurate distance measurement between the Earth and Sun.

If one observer can precisely time when they see a planet cross over the edge of the Sun compared to another observer on a different spot on Earth, a mathematical concept known as parallax (the apparent change of position of an object as an observer moves) can be used to measure distance to the object using trigonometry.

These transit measurements were attempted long ago, although they were not perfectly accurate due to the difficulty in precise timings of these events.

The first to make accurate predictions of Mercury and Venus transits was one of the most famous astronomers in history, Johannes Kepler (1571-1630). The German astronomer – who fundamentally changed our understanding of planetary motion – produced the Rudolphine tables that fairly accurately predicted these transits.

Interestingly, these tables show that Mercury transits can only occur in the months of May or November due to the planet’s orbital characteristics.

One notable prediction by Kepler was that a transit of Mercury and Venus would occur on November and December, respectively, in 1631. It was thought at the time of Kepler that this celestial opportunity would make it possible to view these transits for the first time ever through telescopes. 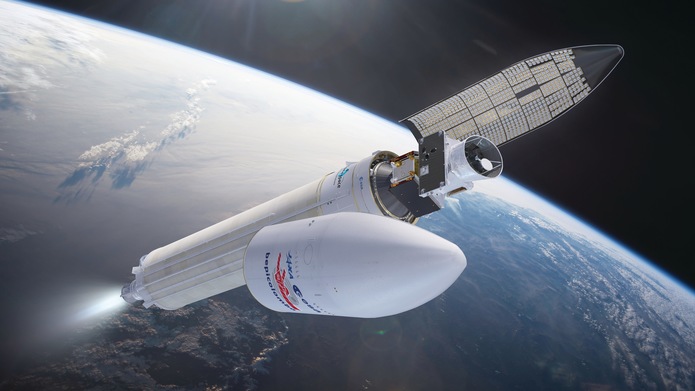 Artist's rendition of the launch of the European and Japanese Bepicolombo mission that occurred on October 20, 2018. This third mission to Mercury has two spacecraft, the Mercury planetary orbiter and the Mercury Magnetospheric orbiter, that will serve as the next generation study of the planet. The spacecraft will arrive at Mercury on December 2025. Image Credit: ESA/ATG Medialab

Unfortunately, Kepler died the year before the double transit. By the time of the Mercury transit on November 7, 1631, only a few people were able to successfully witness the event, with the first being credited to Pierre Gassendi, since he gave a written account of the observation. Gassendi, a well-known French philosopher and astronomer, was able to observe the planetary crossing from Paris by projecting an image of the Sun through his telescope onto a white piece of paper and following Mercury across it.

The study of planetary transits is not utilized the same way as they were in the past but are now very important for discovering objects light-years away from Earth. The highly successfully Kepler spacecraft, named after Johannes Kepler and that has discovered thousands of planets outside of our Solar System, used minute transits across distant stars to reveal exoplanets. The transit method of exoplanet detection has now become the most successful technique for astronomers. 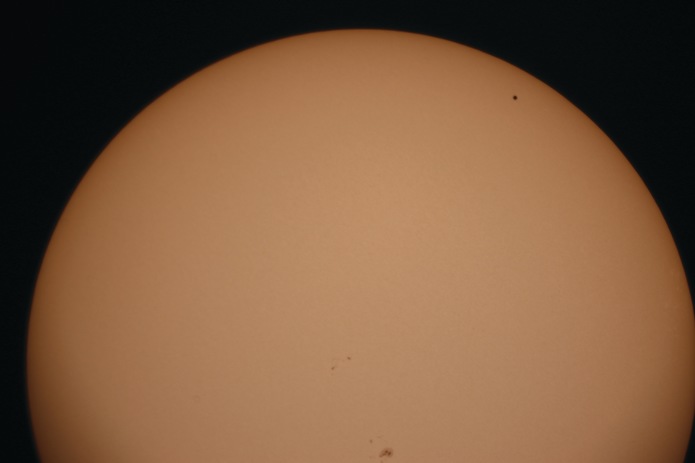 The tiny silhouette of Mercury can be seen near the top-right edge of the sun's massive disk in this telescopic image taken in front of the Lohman Planetarium during the last transit on May 9, 2016. Image Credit: Seth Mayo/MOAS

For the transit of Mercury that occurs on Monday, November 11, the Sun will fortuitously be in the sky for Florida and much of the United States.

Starting at 7:36 a.m. EST, Mercury begins its triumphant trek across the Sun. By 10:20 a.m., Mercury will be the closest to the Sun’s center for the entire transit. After about a 5 ½ hour transit journey, Mercury will depart the Sun’s massive disk at precisely 1:04 p.m.

As the transit occurs, the unlit Earth-facing side of Mercury will be seen as a tiny black dot. Even sunspots – cool areas on the Sun created by magnetic disturbances – can dwarf Mercury in size if they are active and nearby. 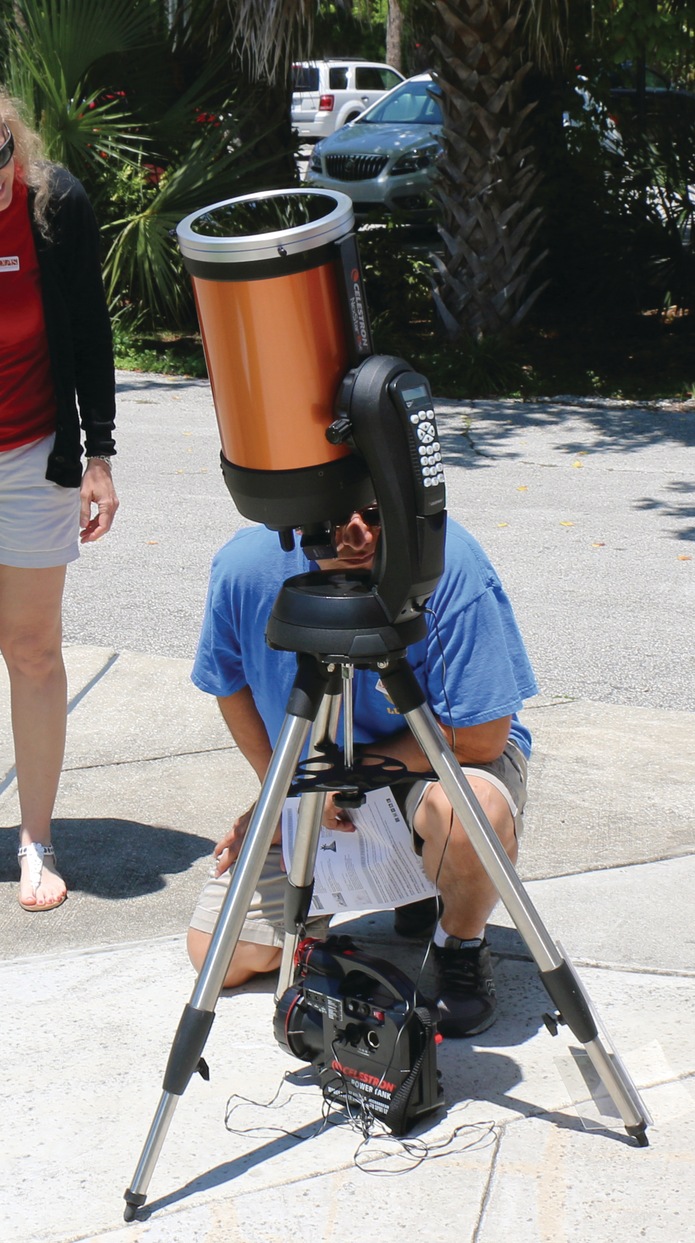 A visitor peers at the transit of Mercury safely through a Lohman Planetarium telescope. The silver-colored disk affixed at the top of the telescope opening filters out most of the harmful rays from the sun for safe viewing. Image Credit: MOAS

To view the transit safely, a telescope with a proper solar filter needs to be used. (Never look directly at the Sun without proper protection). If performed carefully, the Sun can also be projected through a refracting telescope, or even binoculars, onto a white piece of paper where Mercury can be followed throughout the transit (just like Gassendi did back in 1631). A professional with the proper equipment and expertise should also be consulted for safe viewing practices.

Looking toward the future, the next transits of Mercury that occur in 2032 and 2039 will not be visible from North America. The next opportunity for this part of the world will be on May 7, 2049.

If the weather cooperates for this transit, the astronomical event will provide a good reminder of the beautiful workings of the Solar System.

MERCURY WILL TAKE CENTER STAGE IN THIS ORBITAL PLAY