After the end of the American Civil War, industry and trade flourished creating vast fortunes. The era from 1865 to 1900 became known as the Gilded Age, and Florida became a winter destination for wealthy travelers and adventurers. For most, the journey ended in northeast Florida, and St. Augustine was one of the most popular destinations. The city possessed a unique charm owed to the fact it was a frontier fishing village and a remnant of the old Spanish empire. The warm winter weather and the unique character both contributed to the explosion of tourism in 1880s. Steamship travel and Henry Flagler’s railroad opened this region of Florida to travelers seeking a break from cold New England or recuperation from an illness.

Before the Civil War, the puritan work ethic frowned upon taking a vacation. With the end of the war, and a rapid rise in industrialization, especially in the north, this idea began to lose its grip on the American psyche.  The industrial north embraced a new type of capitalism, one based on the use of new technologies that created enormous wealth. The American south returned to an agrarian system and lagged behind economically. This new class of wealthy people had the resources to travel for extended periods of time to new and exotic locations. As a result of this great economic expansion, a vacation could restore both body and spirit and was deemed a compliment to work.

Gilded Age travel books promoted the idea of leaving the dirty, overcrowded city for the countryside and the faraway climes. Florida was still very much considered a frontier in the late 1800s. It’s warm subtropical areas, sea breezes, and vast wilderness teaming with exotic wildlife appealed to the leisure traveler. Entrepreneurs saw an opportunity and began to build an infrastructure to bring these tourists to Florida. Henry Flagler built the Florida East Coast Railroad, and commercial steamships carried passengers up the St. Johns River to St. Augustine, Enterprise, and Sanford. Florida began to open up, and this set the stage for the artist tourist to paint the scenery. 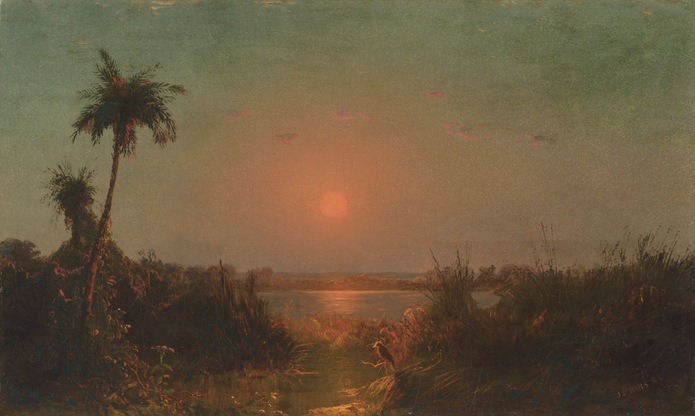 Early artists arriving in the early 1880s arrived the same way as any other tourist. St. Augustine was not easily accessible by boat from the ocean because the inlet was dangerous and consistently shifting. Rather, the artist would take a steamship to Jacksonville, and from there, take another steamship up the St. Johns River to a small landing called Tocoi. At this landing passengers would board a rickety train pulled by horses, and later by a steam locomotive, called the St. Johns River Railway to St. Augustine. It took about three hours to make the 15-mile trip to the ancient city. Along the way, artists would have seen and been inspired by the lakes, streams, giant cypress trees, and subtropical hammocks.

Once in St. Augustine, the artist would discover endless opportunities to paint quaint streets, the old fort, a busy harbor, and beach scenes with majestic sunsets. Just on the outside of town, endless swamps, forests, rivers, and ancient trees draped with Spanish moss surely created artistic inspiration. Landscape artists working in Northeast Florida created oils on canvas or watercolors on paper with most artworks being small. This made it easy enough to for the tourist purchasing a painting to take it home. These small masterpieces acted as souvenirs or high-end postcards. 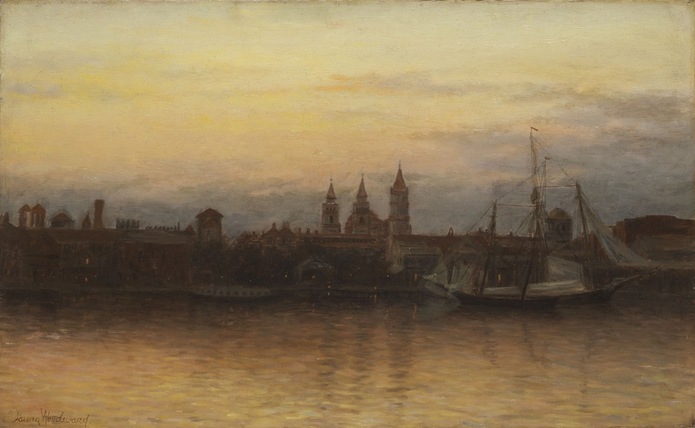 Many of America’s greatest landscape artists traveled to Northeast Florida like Martin Johnson Heade, Thomas Moran, Frank Henry Shapleigh, and Laura Woodward to name a few. Florida would become part of the “grand tour” for these artists with their steady hand and keen eye for beauty. Many of these artist’s works reside in the Cici and Hyatt Brown Museum of Art allowing us to see up close and personal the many natural wonders of Florida the same way the artists did. The Florida landscape, wild, primeval, and exotic, certainly inspired artists and tourists alike.