When most of us picture Christmas dinner in our minds we have a pretty standard image of roast turkey, ham, stuffing, pie, etc. And we have a typical image of what all those things look like and should taste like. But what did we have before all of that became the standard? By the latter half of the 19th century, the holiday had started to become more recognizable. Christmas trees and Christmas cards had become a staple of Christmas. By then the holiday’s meals would look familiar at first glance but on closer inspection would be quite different. Goose instead of turkey on the Christmas table, meat in the pie, and so on. That’s not to mention the differences in actually cooking the food. 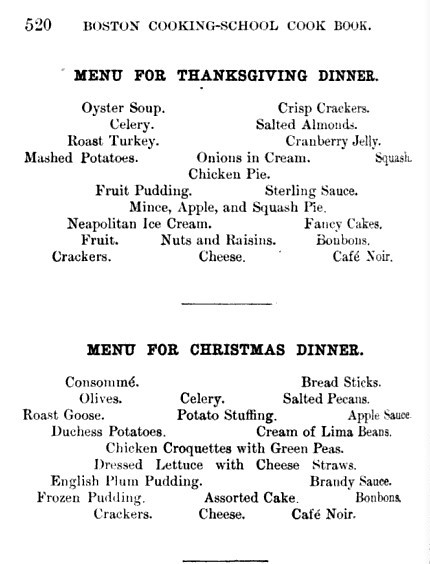 This image is from the 1896 edition of the Boston Cooking-School Cook Book, the first edition being printed in 1893. It was written by Fannie Farmer a graduate of, and eventually head of, the Boston Cooking School. Farmer’s heavily detailed and expansive cookbook became a crucial reference not long after it was first published. It defines different techniques and explains recipes in detail. The book also provides sample menus for different days or events. Seen here are the sample menus for Thanksgiving and Christmas. Ordered from top to bottom: appetizers to desserts. There are some familiar items, the roast turkey, cranberry jelly, etc. But there are more items that are likely unfamiliar to a modern American audience. Roast goose and mince pies have lost their place on the modern American table. The Christmas goose is likely only familiar to many Americans as something from Charles Dickins' stories. But the goose was once the proper centerpiece of the Christmas table. There have been many reasons given for the goose’s downfall from it being more difficult to cook to a general prejudice against the bird. One of the most likely reasons, however, is that by the 1930s and 1940s farmed turkeys were being bred larger and cheaper than geese. Mince pies, or mincemeat pies, date back to the 14th century in England. The filling is a mixture of dried fruits, brandy or other alcohol, and meat. Farmer’s recipe calls for lean beef, but other recipes use hog feet or ox tongue. Though meatless versions were popular as well and remain so in some places particularly in Britain. 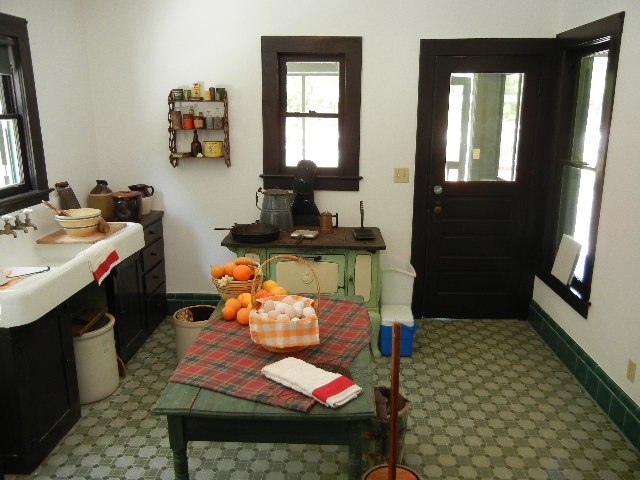 The kitchen at Gamble Place in Port Orange.

The kitchen of the latter 19th century would be a difficult place for most modern cooks. The majority of the kitchen tools would be recognizable and easy to use. The appliances on the other hand would take some significant getting used to. Farmer gives a very detailed description of a stove from that period,

“A cooking- stove is a large iron box set on legs. It has a fire-box in the front, the sides of which are lined with fire-proof material similar to that of which bricks are made. The bottom is furnished with a movable iron grate. Underneath the firebox is a space which extends from the grate to a pan for receiving ashes. At the back of fire-box is a compartment called the oven, accessible on each side of the stove by a door. Between the oven and the top of the stove is a space for the circulation of air. Stoves are connected with chimney- flues by means of a stove-pipe and have dampers to regulate the supply of air and heat and as an outlet for smoke and gases. The damper below the fire-box is known as the front damper, by means of which the air supply is regulated, thus regulating the heat. The oven is heated by a circulation of hot air. This is accomplished by closing the oven-damper, which is situated near the oven. When this damper is left open, the hot air rushes up the chimney. The damper near the chimney is known as the chimney damper. When open it gives a free outlet for the escape of smoke and gas. When partially closed, as is usually the case in most ranges, except when the fire is started, it serves as a saver of heat. There is also a check, which, when open, cools the fire and saves heat, but should always be closed except when used for this purpose. Stoves are but seldom used, portable ranges having taken their places. A portable range is a cooking - stove with one door; it often has an under oven, of use for warning dishes and keeping food hot. A set range is built in a fireplace. It usually has two ovens, one on each side of the fire-box, or two above it at the back. Set ranges, as they consume so large an amount of fuel, are being replaced by portable ones.” 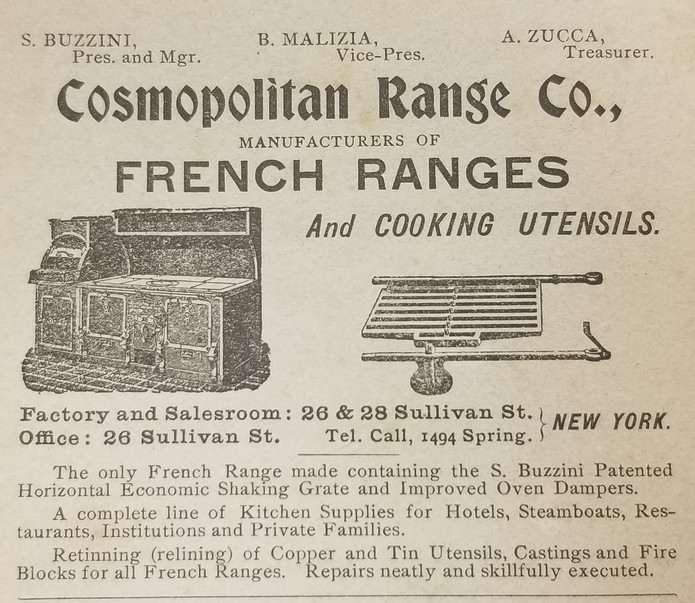 Meyer, Adolphe. Eggs and How to Use Them. United States, published by author, 1898.

The book goes on to discuss the types of fuel for stoves: kerosene oil, gas, softwood, hardwood, charcoal (hard coal or soft coal), and coke (a byproduct of coal that burns hotter and cleaner). Typically, a mixture of fuels was used. For instance, hardwood would be used as a base while softwood and coal would be used as kindling. The book also provides instructions on how to build and maintain a fire. You would begin by opening the fire-box and covering the grate with a combination of twisted paper and softwood as your kindling. Over this, you arrange hardwood and two shovelfuls of coal. You then open the dampers and place a lighted match under the grate. This should result in a strong fire. As the wood burned down you would add more coal to maintain the fire.

Preparing a goose for Christmas dinner was an involved process especially from a modern viewpoint. First, the goose had to be plucked and then singed. In Aunt Babette's Cook Book: Foreign and Domestic Receipts for the Household. A Valuable Collection of Receipts and Hints for the Housewife, Many of which are Not to be Found Elsewhere Babette explains how to singe a goose, “After the goose has been picked, take some old newspapers, light them in a coal-bucket, hold the goose over the flames in this way: Take the neck in your left hand and the feet in your right, swing it back and forth over the blaze until the little hairs are all singed off, being very, very careful that your dress or apron does not take fire.” After this, you would wash the goose and remove the pin feathers. Once that was done it was time to draw which meant removing the inside contents. Then another wash and wipe down then the bird was ready to be stuffed and trussed. In Farmer’s recipe, the next step was to season the goose with salt and pepper and then lay six thin strips of salted pork over the breast. The goose was then placed on a rack with a drip pan before being put into the oven for two hours. Every fifteen minutes the goose needed to be basted with the fat from the drip pan. For the last half hour of cooking the pork was removed. Once cooked the goose would be removed from the oven and placed on a platter. You would then remove the string and skewers from trussing. Finally, the dish was garnished with watercress, cranberries, and apples. After all that you would have a lovely roast goose.

Mince pies are still popular in some places, namely the United Kingdom, but they’ve undergone a transformation. The original mincemeat pies were large thick-crusted pies made with meat. Nowadays mince pies are smaller and rarely contain meat. By the 1890s when Farmer’s cookbook came out the popularity of meatless mince pies had already been on the rise for some time. Farmer includes recipes for both versions of mince pie. An older more traditional recipe found in Seventy-five Receipts for Pastry, Cakes, and Sweetmeats by Eliza Leslie printed in 1830 lists the ingredients as follows:

“One pound and a half of boiled beef's heart, or fresh tongue - chopped when cold.

One quart of white wine.

One quart of brandy.

One wine-glass of rose -water,

A quarter of an ounce of mace powdered

A tea-spoonful of salt.

Half a pound of citron, cut in slips.”

According to the recipe, you would first parboil the tongue or heart. Then cut off the outer layer and any fat. Once it completely cooled you would chop it into fine pieces. Then do the same to the suet, the raw, hard fat of beef, lamb, or mutton found around the kidneys. After that mix the meat and suet along with the salt. Core and chop and the apples then stone and chop the raisins. Mix both with the currants then add to the meat mixture. Then the sugar and spices went in along with the grated peel and juice of the two oranges. Pour in the rose water and liquor and mix well. Put the filling into the waiting pie crusts, which are laid in soup bowls, and layer the slips of citron on top before adding the top of the pie. Crimp the edges and prick holes in the top and then it was ready for the oven. The pies only took half an hour in what Leslie refers to as a “brisk” oven. Farmer’s recipe is similar except in substitutes tongue or heart for lean beef.

The 19th century Christmas dinner was quite different from our modern one, both in the kitchen and once it was on the table. We’ve explored the old menus, looked into wood-burning stoves, and walked through recipes. They have provided a look into the Christmas dinners of the past and gave a little look into the lives of those who prepared them. So while roast goose, mincemeat pies and wood-burning stoves they were cooked in have fallen out of favor they are still part of our Christmas story.