The History of Christmas

Christmas began to be celebrated during the 3rd century in Europe after church officials appointed December 25th Jesus of Nazareth’s birthday. The actual birthdate of Jesus is unknown and as such the church officials choose the date of an already popular holiday, Saturnalia. Saturnalia was a Roman holiday that was dedicated to Saturn, the Roman god of agriculture and the harvest. The holiday was spent feasting and giving gifts and people would decorate their homes with wreaths and other plant-related décor. At the time, the church adopted the traditions of several pagan winter holidays. Aside from Saturnalia, they would also go on to adopted mistletoe from the Vikings and trees being brought into the home from the Saxons. For a time the pagan traditions and Christmas coexisted until eventually, they merged to become just Christmas. Over the centuries the holiday would continue to change and evolve. 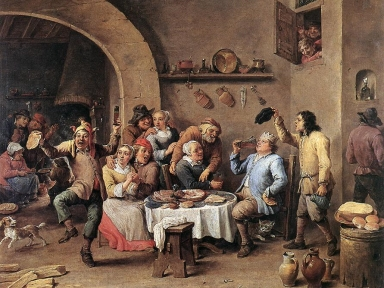 Christmas during the colonial period in America was very different from what is celebrated now. Some colonists, such as the Puritans, denounced Christmas altogether claiming it was too pagan. For others, December 25th was still the first day of the Twelve Days of Christmas. Over those twelve days, there would be feasts, special Mass/Service at the church, visiting family and friends, and one or more parties depending on where you lived and your social standing.  Usually, the last day of Christmas was seen as the prime merrymaking date. The focus of the holiday at the time was Jesus and parties. People did exchange gifts but it was not considered crucial. In fact, most of what we would recognize as key points of Christmas were not around or were not practiced by a majority of Americans. The only people who had Christmas trees were Germans and other groups viewed it as very odd. The same can be said for Christmas stockings and Santa Claus. Christmas would remain largely unchanged until the Victorians came along. 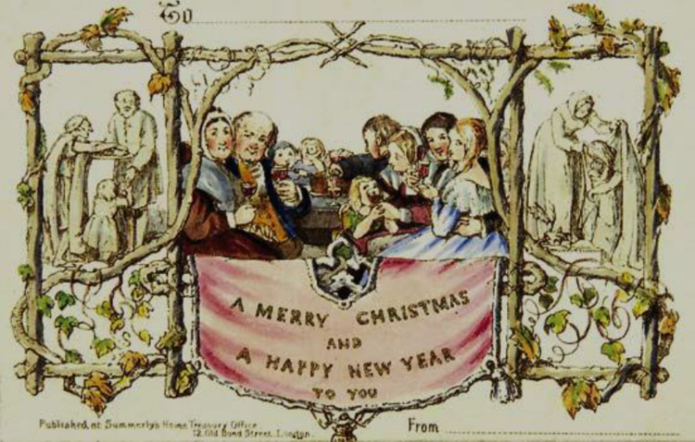 The 19th century saw huge changes to Christmas. This is the period where the holiday became more recognizable to modern eyes. For example, the tradition of Christmas cards, as we know them, began in this period. The first true Christmas card was designed by J.C. Horsley in 1843 after having been commissioned by Sir Henry Cole. The card is a triptych which is a picture that has three panels next to each other. The two panels on the left and right give examples of two popular Christmas charities, feeding, and clothing the poor. In the center, a traditional upper-middle-class family is shown giving a toast to an absent family member or friend. Most importantly though this is when the focus of Christmas changed. Before the holiday rarely focused on the home, it was in large part full of public or semi-public social activities, namely parties with copious amounts of alcohol. The parties stayed but people began to associate Christmas with the home and children. A factor in this was Santa Claus, who prior to this period had several incarnations. Santa Claus had some popularity with the general population but it was during the 19th century that it would skyrocket. Those incarnations of the saint were grouped into one character by Clement Clarke Moore in 1822 when he wrote An Account of a Visit from St. Nicholas, which would be later be called ‘Twas the Night Before Christmas. Santa Claus’ traits were established for American culture in Moore’s poem. Santa Claus was referred to as a “right jolly old elf” and several of his most well-known traits such as being able to transport using a chimney were established. 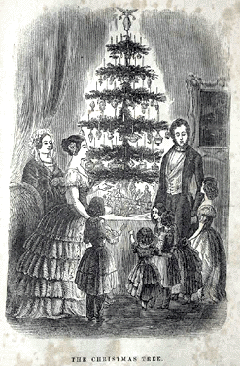 Another Christmas facet that exploded in popularity in that period was Christmas trees. Germans had been using Christmas trees for centuries by this point but it had never caught on with the general populace. That is until 1846 when Queen Victoria and Prince Albert, who was German, were shown with a Christmas tree in a popular publication. This resulted in the upper and middle classes rushing to buy a Christmas tree to emulate the British royal family. Shortly thereafter trees and ornaments became essential parts of the holiday. The end result of all the “new” traditions popularized during the Victorian Era was a Christmas that we could recognize. 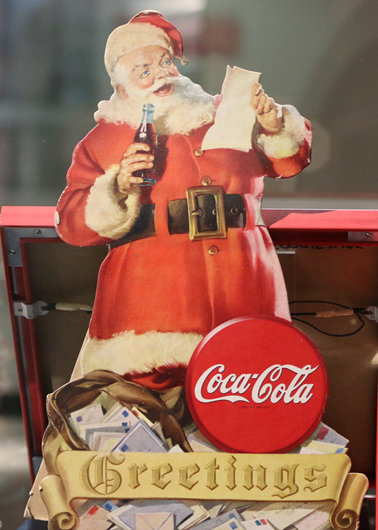 Christmas in the 20th century reflected the changes from the 19th century. The holiday traditions stayed the same for the most part, people still put up Christmas trees, filled stockings, and held holiday parties. The main change came with the commercialization of the holiday. The stores had caught on by the early 20th century and began to increase their advertising and gift selection. Unsurprisingly many of those ads were for children’s toys. The toy aspect of Christmas grew even more as the toy market itself expanded when many classic toys were invented in the early part of the century. The Teddy Bear is a good example of that, invented in 1902 by Rose Michtom and her husband Morris. They went on to found the Ideal Toy Company which would create many more popular toys. Even during the Great Depression and the World Wars people still tried to keep up the traditions as best as they could. Even when people did not have a lot of money they would still try to get gifts for their family, particularly their children, because it was now deeply ingrained in the culture of the holiday. During this same period, Coca-Cola started using images of Santa for Christmas advertisements. In 1931 Coca-Cola commissioned Haddon Sundblom to create an image of Santa that would really embody the character. For the design Sundblom took inspiration from Clement Clark Moore's ‘Twas the Night Before Christmas. The result was the classic Coca-Cola Santa that we all know today. Christmas saw a boom in post-war America with a larger middle class and a larger number of children. As the middle class grew more people were able to afford more things for Christmas. Many parents that grew up in the Great Depression were able to give their own children the idealized Christmas that the depression prevented for many of them. Parties were still popular and remain so, but for many people Christmas day became a time just for family. For the most part, Christmas has remained fairly consistent and its advances in commercialization have not prevented the traditions formed in the Victorian Era.