Faces of the Past: Portraits from the MOAS Collection

By James "Zach" Zacharias, Senior Curator of Education and Curator of History

For centuries artists have created portraits of people. The portrait dates back thousands of years and was usually reserved for people of importance like the wealthy, kings, queens, nobility, generals, ancestors, and other individuals deemed worthy. The magnificent portrait is a creative collaboration between the artist and the sitter and can mean many things to different people. The most important reason for the portrait is simply for the remembrance of that person. There are lots of decisions for the artist to make when rendering a likeness of an individual.

The portrait artist has many aspects to decide when a creating unique portrait of a person. Decisions on color, shape, line, scale, angle, background, and overall composition are critical to creating a realistic likeness. A good portrait artist can communicate the illusion of three dimensions on a 2D surface while creating a natural scene. There are many impressive portraits in the galleries of the Museum of Arts & Sciences to view and learn from. Let's talk about a few of my favorites from each gallery. 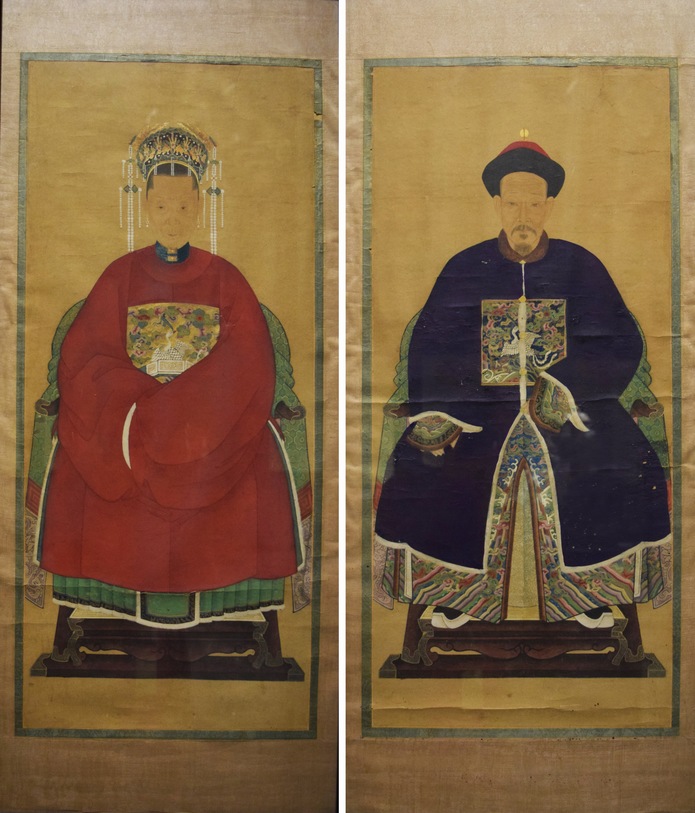 Within the Schulte Gallery of Chinese Art is a set of beautiful ancestor portraits. Ancestor portraits date back thousands of years and are an important connection between the living and the deceased. Ancestors are believed to be honored and revered and therefore can bring good fortune to the descendants of the living. These portraits serve as ancestor worship in the home - usually by members of an imperial court. Most of the portraits that have survived date back from 1644 to approximately 1911. Ancestor portraits are highly stylized, usually depicting a frontal pose with the sitters draped in flowing, colorful semi-formal gowns and the lush carpet beneath their feet. An interesting feature is that they are almost all painted with the same facial expression, usually a somber and detached look. Accurate facial features and lavish jewelry is a common feature. Social rank is depicted by the color of their grown. Bright yellow was reserved specifically for the emperor. 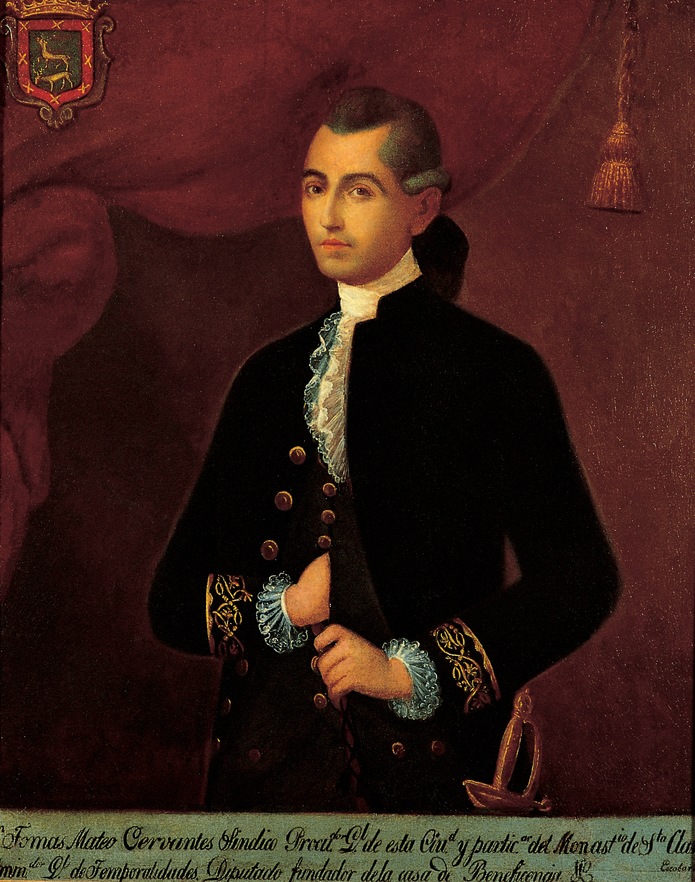 Portrait of Don Tomas Mateo Vervantes, circa 1800, oil on canvas by Vincente Escobar

Another wonderful portrait within the Museum resides in the Cuban Museum - the large format Portrait of Don Tomas Mateo Cervantes, circa 1800, oil on canvas by Vincente Escobar. He was one of the early portrait artists living in Havana and is considered one of the most important colonial portrait painters in the city, specializing in rendering portraits of a growing wealthy merchant class as well as other aristocrats. Not much is known about the life of Vincente Escobar, but he was believed to be a man of "free color," living from 1747-1818. He is a vital link to a new formal portrait tradition developing in Cuba. The sitter, Don Tomas, was a cultural leader, Attorney General of the City, and a member of the nobility. He is presented in three-quarter view shown in a luminous, realistic style. He wears a deep blue tunic with gold braid detail and a formal sword. The white lace cravat shows Escobar's attention to rendering detail. He paints a lush garnet color velvet fabric in the background of the canvas which provides a perfect contrast against the blue suit of Tomas. In the upper right-hand corner, the family coat of arms is depicted which shows his important role in society. 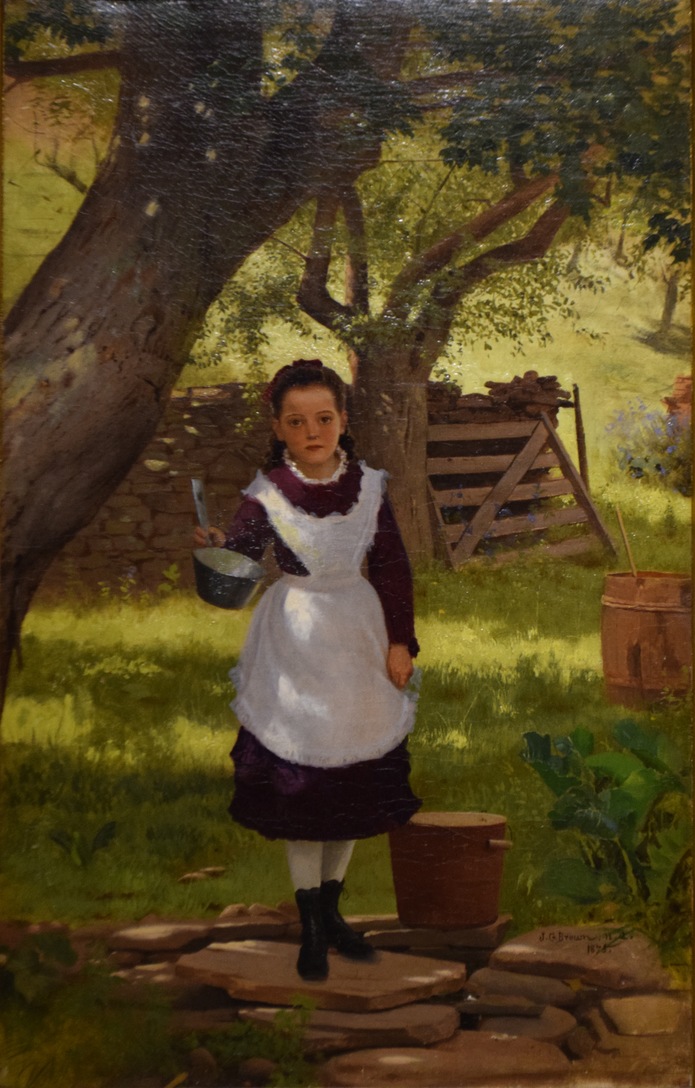 Girl with Dipper, 1875, oil on canvas by John George Brown

There are so many wonderful portraits to see in the Dow Gallery of American Art that it is hard to choose a favorite. One portrait that I am drawn to is titled, Girl with Dipper, 1875, an oil on canvas by John George Brown. Brown was born in England and was originally a glass cutter by trade. He eventually made his way to New York and opened his own studio. In the 1880s he began painting his favorite subject, children, especially street youngsters in urban areas. Girl with Dipper is a different setting for Brown. This portrait depicts a young girl set in the countryside. The young Victorian girl, shown in the middle ground, is wearing fine clothing of the time and stands under a lush tree holding a metal dipper. Brown presents her offering the viewer a sip of cool water from the well she stands over. His use of shadow and light is shown throughout the composition of what is clearly a summer's day. The detail and realism of this Gilded Age portrait show Brown's ability to work greater than his norm. John George Brown lived from 1831-1913 and is quoted saying, "I want people a hundred of years from now to know how children that I painted looked like." 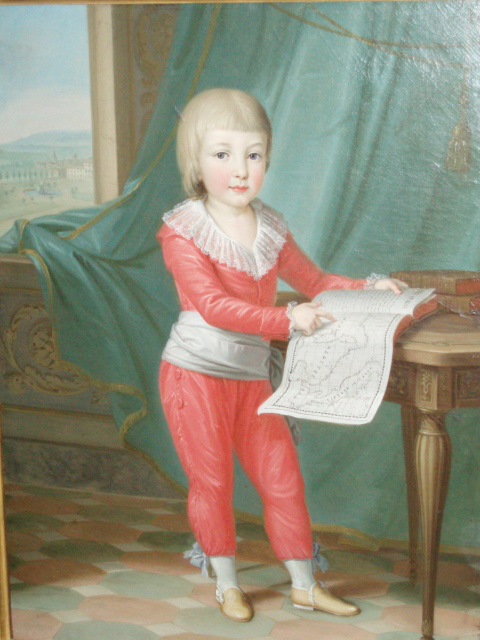 An interesting portrait with a unique Florida connection which can be seen appearing in several special exhibitions at MOAS, is a French painting of a child, Prince Napoleon Achille Murat, circa 1820, an oil on canvas by Marie-Eleonore Godefroid. Godefroid was a prominent female portrait artist from Paris known for her great renderings of prominent children. Godefroid paints the young Prince and nephew of Napoleon Bonaparte in a "grand manner" that was popular at that time in Europe. Grand manner painting was considered the highest considered the highest and most academic style of art in the 18th century. The grand manner was a style that showed subjects life-size standing in classical poses that mimicked the ancient Romans and Greeks. Another characteristic shows sitter in full-length, usually in surroundings that conveyed nobility or some other elite status. Depictions of classical architecture and pastoral backgrounds are all common metaphors included in this style that signify great wealth and estates.

Upon the fall of the Napoleonic Empire, Achille Murat, now a young man, fled to the United States and married Catherine Wills Grey, the grandniece of George Washington. He eventually made his way to territorial Florida and settled in the ancient city of St. Augustine. He took up residence on St. George Street and was known as a local eccentric. He enrolled in the local militia under Brigadier General Joseph Hernandez. He was known to eat all sorts of unsophisticated foods that most local residences did not consume. He was legendary for eating owls, raccoons, lizards, snakes, and alligators. One story was told of him eating a buzzard where he was quoted saying, "Buzzard is no good whether you boil, fry, or grill him, he is just no good." Archille was known to wear frontier clothing and rarely bathed. He was often seen nude sitting in the river to cool off. He would move his furniture to the beach and conduct business, but later the tide would roll in and wash his furniture out to sea.

Achille then moved to Tallahassee where he owned a plantation called Lipona and became an alderman and mayor of the city. Unfortunately, this long-time story of him being a mayor and alderman in Tallahassee has no historical proof. Unsuccessfully trying to receive his inheritance back, the once Prince of Naples died in 1847. He and his wife are buried in Tallahassee on the outskirts of Florida State University.

Portraits play an important role in human history since the beginning of civilization. They have memorialized gods and goddesses, the wealthy, the famous, the eccentric, and the everyday person. Once, it was the only way to capture an image until a new form of depicting people appeared on the horizon. Photography did not kill the painting, but it did change it and allowed painters new creative options like cubism and surrealism. There are many great portrait paintings to be explored within the galleries of the Museum. The next time you are here, take some time to look at the unique histories and styles of these magnificent portraits.