By Eric Mauk, Curator of Exhibits

The Museum of Arts & Sciences has over 27,000 accessioned objects. Many of these objects have never been on exhibit.

One piece which has never been exhibited is contained within a small emerald green velvet-covered box. When the box is opened, it reveals a walnut. Not an ordinary walnut, however, when this walnut is removed from the box you see separating the two shell halves two gold rims held together by a small gold hinge. When the walnut shell is opened you will see that the inside lid is lined with red velvet and the inside the base are two tiny glass perfume vials with gold stoppers, one inscribed with the initial “N”, and one with the initial “B”. Alongside the perfume, vials is a small gold funnel, all sitting neatly within individual compartments in a gold tray. Along the gold rim, there is the inscription “Souvenir Madame Hoppner.”

While the piece itself is beautiful and quite fun, it was upon doing research and finding its remarkable history that truly made this piece a hidden treasure.

“The remarkable and interesting collection of Byron souvenirs gathered by Senhor Salvador de Mendonca, Brazilian minister at Washington – Portraits, documents, jewelry, and personal possessions of the English poet, and their close connection with his romantic life.”

“Bryon kept many distinguished friends, among Senhor Mendonca’s trinkets there is a curious little perfume case. It is a walnut shell, lined with velvet, and containing two tiny bottles with gold camps. One is initialed “N” (for Noel) and the other “B”. They were designed for hosting attar roses. On the rim is engraved “Souvenir Madame Hoppner”. Madame Hoppner was the wife of the artist John Hoppner (1758-1810) the English portrait painter.”

Further research revealed that Senhor Mendonca purchased this at an 1892 sale of the collection owned by Mr. Robert Francis Cooke, a former partner of the firm of John Murray, the poet’s publisher, and intimate friend. The collection was sent to Mr. Murray after Bryon’s death in Greece in 1824 at the age of 36. 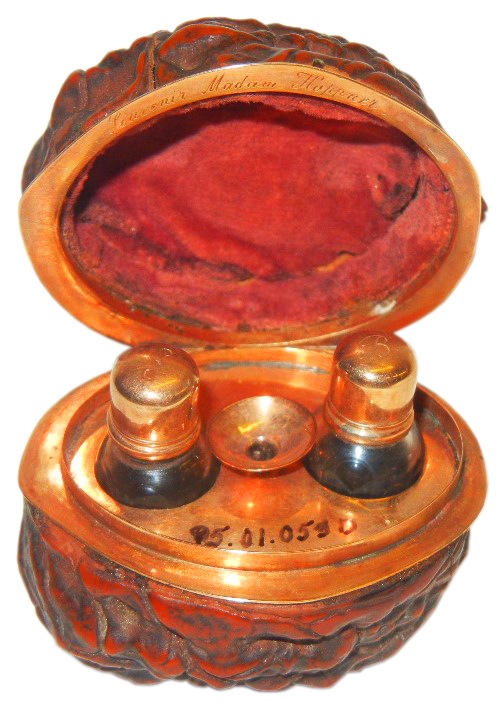 The Walnut perfume case was donated to the Museum in 1995 by longtime museum benefactor, Anderson C. Bouchelle. At this time, it is not known when or where Mr. Bouchelle obtained this historical piece.