Keep an Eye on the Sky for Meteor Watch Day

Have you ever noticed a brief flash of light in the night sky and made a wish on a falling star? If so, then you have seen a meteor! Often called “shooting stars," meteors are pieces of rock or ice that fall through Earth’s atmosphere, mostly the size of sand or dust particles. As they reach high speeds, the specks burn up and create momentary streaks of light. June 30 marks National Meteor Watch Day, reminding us to keep an eye on the sky for these beacons of light both now and throughout the year.

To witness a shooting star for yourself, seek out a dark location far from light pollution on a clear evening. Even though meteors are always entering the atmosphere, the best time to notice them is during the night since it is easier to pick out the brief glimmers against a pitch-black sky. In order to see many shooting stars at once, mark your calendar for a meteor shower! 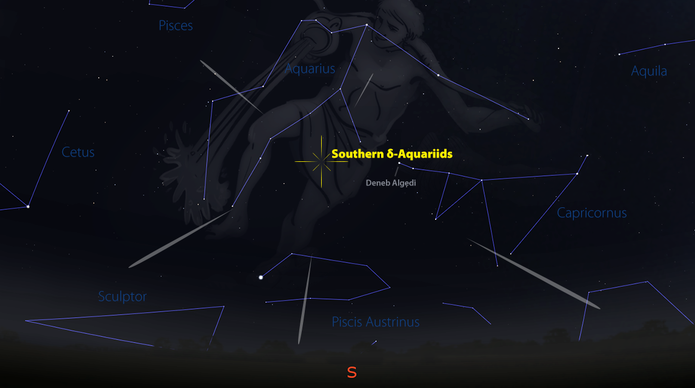 The radiant point of the annual Southern Delta Aquariids can be seen inside the zodiac constellation
of Aquarius in late July toward the south. Image Credit: American Meteor Society/Stellarium

While the first half of the year is not the best time to view meteor showers, there are a few notable ones later in the year. The next major shower, called the Southern Delta Aquarids, occurs in late July and is best seen from the southern hemisphere. We will still be able to see them from the northern hemisphere, but it is less prominent at about only 10 meteors per hour. Although this shower typically peaks around July 30, the light reflected off the large gibbous Moon late in the month will likely diminish the ability to see these meteors clearly. To avoid this issue, observe these before dawn on July 27, since the Moon's glare will not be as intense. 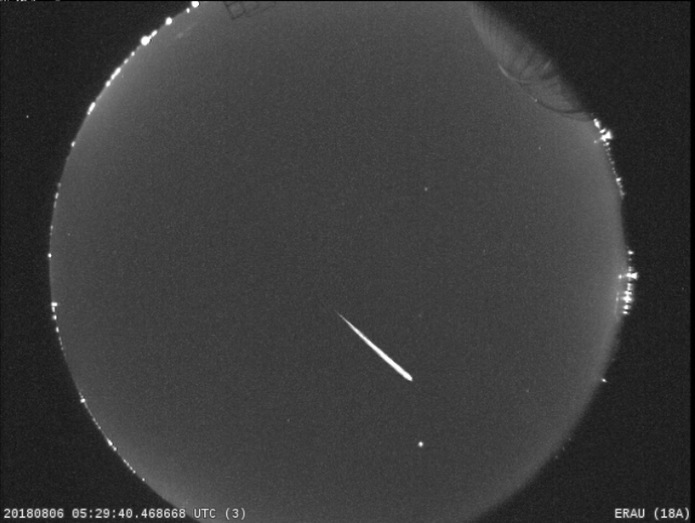 A Perseid meteor was caught in an all sky camera at Embry-Riddle (ERAU) in Daytona Beach as it streaked overhead. A bright meteor such as this is called a fireball, and this particular one was seen in August of 2018 as it was moving at about 132,000 mph. The all sky camera at ERAU is part of NASA's All-sky Fireball Network under the Meteoroid Environment Office and is collecting data on meteors over Earth to aid in spacecraft design and safety. Image credit: NASA/MEO

If you are interested in a more active event with between 50 and 75 shooting stars per hour, the most popular meteor shower occurs in August. The Perseids - active between July 17 through August 24 - will reach a maximum around August 12. This shower is appropriately named for its proximity to the constellation of Perseus where its radiant point lies. This meteor shower is visible every year when the comet 109P/Swift-Tuttle returns to the inner Solar System and releases particles. So in celebration of Meteor Watch Day, head outside on a clear summer night and see how many shooting stars you can find! Happy stargazing!

Visit the American Meteor Society at www.amsmeteors.org for more information.