Conjunction of Venus and Jupiter

Our two brightest planets, Venus and Jupiter, will put on a show this month, as they pass within 1.4 degrees of each other in the western sky at sunset.  That’s about the width of your index finger at arm’s length. In astronomy, when two astronomical objects appear to share a part of the sky, we call this a conjunction. 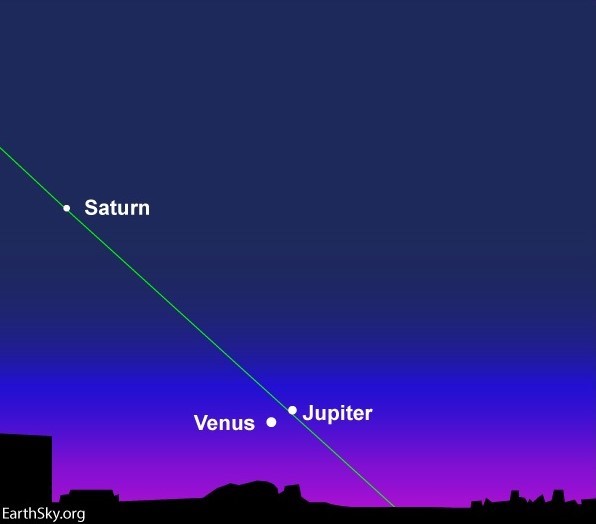 Venus and Jupiter will hover just above the horizon in the west after sunset this month.

From our view on Earth, Venus and Jupiter are both brighter than any star. Having them so close together in the sky makes for an exciting spectacle. Why are these two planets the brightest, though? Venus is small and rocky, while Jupiter is giant and made almost entirely out of gas. They’re quite different but share one important similarity: their reflective atmospheres.

Venus is the brightest planet for two main reasons. First, Venus is our planetary next-door neighbor, so we have a very good view of it from here on Earth. Second, Venus has an extremely reflective atmosphere. The measure of a surface’s reflectivity is called albedo. The albedo scale ranges from zero (reflecting no light) to one (reflecting all light). So the higher an object’s albedo, the brighter and shinier it is. 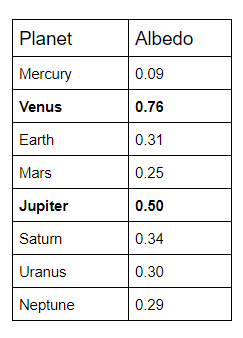 Venus is blanketed in a thick atmosphere which is 93 times as thick as that of Earth’s. These dense clouds of carbon dioxide scatter about three-quarters of incoming sunlight back into space, turning Venus into a shining beacon in the night sky. Even though Jupiter is hundreds of millions of miles away, in the outer part of our solar system, it is still the second brightest planet, due not only to its own high albedo, but also its size. 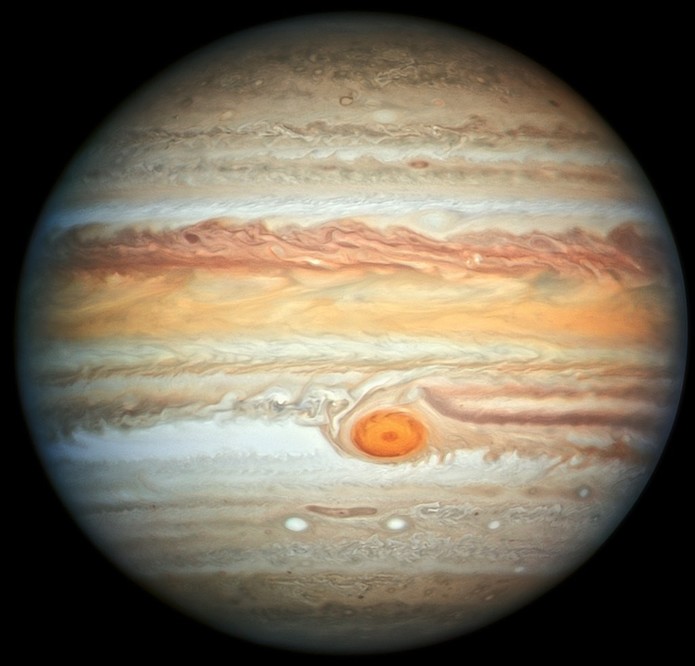 Hubble’s New Portrait of Jupiter. July 27, 2019. Image credit: NASA, ESA, A. Simon, M.H. Wong.
Jupiter is the largest planet in the solar system, and all the other planets could fit inside of it. If you stacked 11 Earths on top of each other, you would just barely reach across the diameter of Jupiter! This huge size means lots of surface area for sunlight to bounce off, making the king of planets a distant, but giant mirror. 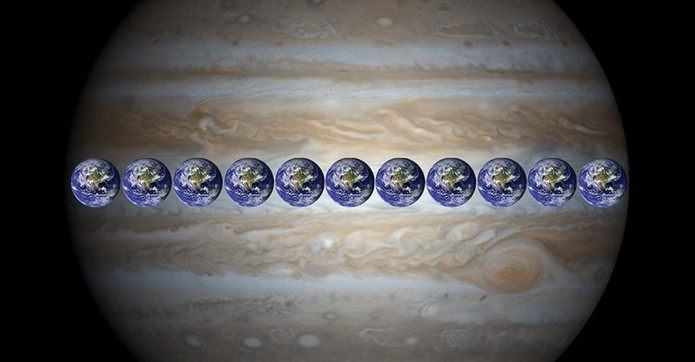 Venus/Jupiter conjunctions happen fairly regularly, with the last being in January of 2019, and the next in 2021. This celestial alignment happens once every 10 to 15 months. Both Venus and Jupiter are bright enough to be seen even before the sun fully sets. Weather permitting we will host a Night Sky Viewing Party on the evening of November 23rd in the MOAS courtyard!

Marvel at the autumn night sky. The two brightest planets, Venus and Jupiter, will appear to almost touch each other in the western sky around sunset, creating a brilliant spectacle. Beautifully ringed Saturn and the fall constellations will also be in view. Weather permitting, join the planetarium staff in the MOAS courtyard as we use our telescopes and laser pointers to guide you through this wondrous evening. Guests are welcome to bring their own chairs, telescopes/binoculars, and curiosities about the universe.

A special presentation of "The Sky Tonight" will take place in the Lohman Planetarium at 6:30 p.m. (limited seating)."The Sky Tonight" show is free for members, $5.00 for adults, $3.00 for children.