The early origins of Coca-Cola is an amazing story with a web of connections which turned a nerve and brain tonic into the most recognized soft drink brand in the world. The story begins on July 8, 1831, with the birth of John "Doc" Pemberton in Knoxville, Georgia. Pemberton was raised in Rome, Georgia and attended Reform Medical College in Macon. By 19 years old, he was a licensed chemist, but his career was put on hold as he served in the Confederate's 12th Cavalry Regiment. Pemberton was wounded in the “Battle of Columbus,” which was the last battle east of the Mississippi, and is often referred to as the closing battle of the war.  He was struck across the chest by a saber and, like most wounded veterans of that era became dependent on morphine for relief. The conclusion of the Civil War brought about an explosion in the popularity and demand of patent medicines for wounded veterans such as Pemberton. Adding to the increase in the burgeoning patent medicine market in the late 19th Century was America’s new brand of capitalism tied to urbanization and individual economic prowess. The American Gilded Age was transforming a land of farmers into an urbanized society of factories, mills, and big city life. This created a frantic lifestyle in which the strains of economic booms and busts created new diseases characterized by psychosomatic symptoms fueling demand for new medicines. 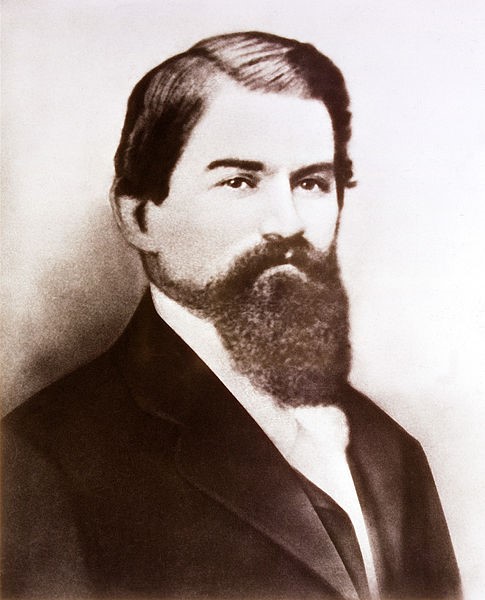 After the war, “Doc as Pemberton was known, returned to chemistry and moved his wholesale drug operation to the Columbus, Georgia area. He specialized in medicines based on herbal remedies and became especially infatuated with the effects of the coca leaf of Peru and Chile. Further north, Atlanta was emerging out of the destruction of the Civil War and, rising like a phoenix, was in the process of reinventing itself. The city transformed into a place for fortune-seekers and soon became the center of the “New South” as entrepreneurs flocked to new opportunities. In 1870, Pemberton seized on this opportunity to moved his pharmaceutical operations to Atlanta. It would be here that “Doc” dedicated his life’s work and personal fortune to the creation of a perfect medicine of all time.

Patent medicines, with a long history of traveling medicine shows, muscle acts, and vaudeville selling techniques reached their zenith in the late 19th Century. Patent medicine is a confusing term’ in actuality there was no patent but only a trademark. Its origin goes back to England when a medicine was endorsed by the royal family as a “royal patent of favor.” Eventually, the concept was exported to North America. A true patent would require proof that the concoction, with its exotic ingredients, actually worked. Most did not. It was among this plethora of patent medicines that Coca-Cola would arise and change the world. The new flourishing mass marketing technique of the era, along with new and more efficient transportation modes, would help create a national and eventually a global market for Coca-Cola. 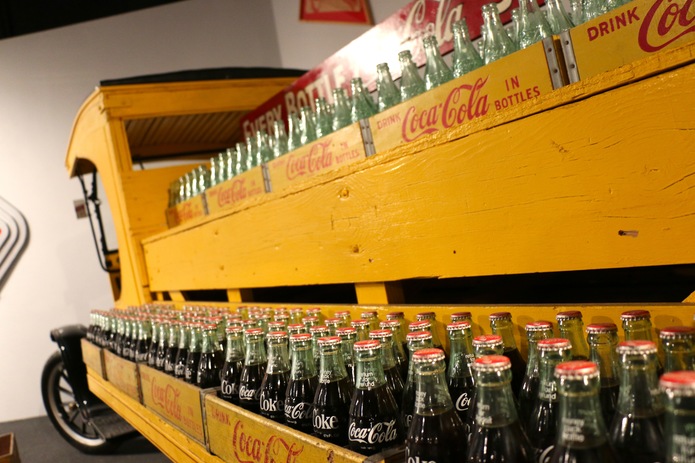 While trying to find a remedy for his own morphine addiction, John “Doc” Pemberton became infatuated with a patent medicine inspired by a French chemist, Angelo Marini, who concocted a tonic in 1863 known as “French Wine of Coco”. This remedy was made with Bordeaux wine mixed with coca leaves and contained 6mg of cocaine. It became the world’s most popular prescription having such effects as, reinvigorating your health, strength, vitality, and energy. “French Wine of Coco” became a medicinal drink known as Vin Marini. It became so popular, Queen Victoria and Pope Leo XIII endorsed it; in fact, Pope Leo gave the drink the Vatican Gold Medal Award and his image appeared on posters endorsing the wonders of its effects. Thomas Edison stated “it helped him work longer hours” and Ulysses S. Grant also touted its benefits as he worked on his final memoirs.

“Doc” Pemberton, working in his lab in 1885, created his own version of Vin Marini, and called it “Pemberton’s French Wine of Coco.” IT contained alcohol and extract from coca leaves. The Women’s Temperance Union helped pass prohibition legislation in July of 1887, and effectively banned alcohol in Atlanta. Now, Pemberton had to deal with a city dry of alcohol and an illegal medicinal drink. In response to this turn of events, “Doc” created a carbonated non-alcoholic version of his elixir which contained syrup, coca leaves, and cola nuts. This change in his formula would be the key to its eventual success.

Another important historical connection developing at this time is the rise of the local drug store and soda fountain shop. This business became the social heart of many towns and neighborhoods. It was a place where people could socialize and gather for gossip. “Doc” Pemberton used the local pharmacy to market and test his new medicinal soda fountain drink – now called “My Temperance Drink.” It was touted as a drink that could “soothe your stomach, rid you of your headache, and calm your nerves.” He also claimed that you could live between 120 and 150 years by taking his new elixir. In reality, it was a really good tasting beverage that had little effect on any ailment. Carbonated drinks were not new, vendors of the day used orange, grape, or cherry and added the fizzy carbonation to them. These drinks were usually popular in the South during the summer season. However, “My Temperance Drink” was a new drink with a new taste now using the traditional flavors. Delicious and refreshing! 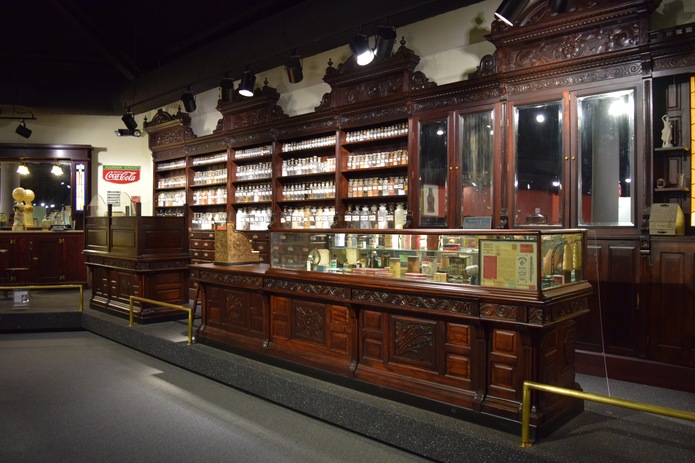 The Pharmacy on display in the Root Family Museum at MOAS

Unfortunately for Pemberton, he was not a good marketer and it was decided to drop the name “My Temperance Drink.” “Doc’s” bookkeeper and new partner, Frank S. Robinson, came up with a new catchy name “Coca-Cola” and used the popular Spencerian Script to craft the famous logo that is still used today. Alliterations were popular at the time and had a nice ring. Robinson marketed the drink as a medicine and a really fresh new tasting fountain drink. In 1887, the first year in business, Coca-Cola sold 990 gallons of syrup. A gallon could produce 128 drinks. That translated into about 76,800 drinks sold. When all of the revenue and expenses were added up, Coca-Cola made a first-year profit of $510.00.

After a series of convoluted business transactions between Pemberton and his varied business partners, Coca-Cola was sold to Asa Griggs Candler. He became the sole owner in 1891 at a cost of $2,300.00. Asa, a traveling salesman by trade, saw the benefits of the new evolving mass marketing techniques. Candler began using coupons, billboards, catch phrases, and souvenirs to advertise the soft drink. In three short years after purchase, the 1893 annual report happily stated that Coca-Cola was sold in every state and territory in the Union. He increased the business tenfold and in 1919 sold the company for an amazing $25,000,000 dollars. 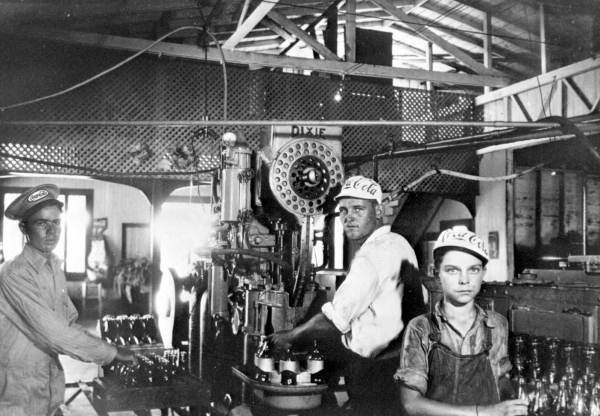 By 1915, Candler recognized that the future was in bottling Coke and a standardized bottle was needed. In Terra Haute, Indiana, the Root Glass Company created the world’s most famous bottle for the company. As a result, Coca-Cola became a worldwide phenomenon that endures today. They created a bottle with such a unique and innovated shape, it is immediately recognizable.

The world's most famous bottle, created by the Root Glass Company in Terre Haute, Indiana

Pemberton’s whole life was dedicated to finding the perfect medicine. Instead, he created the perfect soda drink. If he had not sold his formula, the drink may have stayed in obscurity like the countless other patent medicines of the time. On August 16, 1888, at the ages of fifty-seven, John Pemberton passed away and left a legacy he would never enjoy. The newspaper’s notice of his death called John S. Pemberton “the oldest druggist of Atlanta and one of its best-known citizens.” Asa Candler “weeping fat crocodile tears” at his funeral, paid tribute to Pemberton as having the most lovable nature and many virtues.