The Fragile Beauty collection features a fresh rotation of rarely displayed pieces of fine porcelain, glass, and ceramics hand-selected from MOAS storage. This curated collection features works of decorative art ranging several centuries and countries of origin. The majority of the pieces were crafted between 1775-2003. Famous manufacturers such as Limoges, Wedgworth, and Meissen are featured among this collection, all of which are still in production today. The fun thing about decorative art is that it is an extremely collectible form of art. Whether it’s a specific shade of glassware, wedding china, tea sets, figurines, glass animal figures, floral vases, vintage boxes, or candlestick holders, most families have some sort of decorative art in their possession. The pieces on display in the Fragile Beauty collection are examples of collectible art forms spanning time and distance, yet intimately relatable to modern life.

A Brief Introduction to Porcelain:

The European history of Porcelain originated in a strong fascination with the white color of Chinese porcelain. There was demand in Europe for these imported status symbols, but the price was prohibitive. The first porcelain factories in France cropped up during the reign of King Louis XIV, originating in faience factories. “White gold” was so sought after that porcelain factories were popping up all over Europe, with centers in France and Germany rising in production. The secret to replicating the bone-white quality of Asian porcelain was discovered by an alchemist in Germany in 1708.

Porcelain can be divided into two categories, the first being soft-paste. Most collectors do not view soft-paste porcelain as being true porcelain. According to an essay by Jeffery Munger from the Metropolitan Museum of Art’s Heilbrunn Timeline: “Soft-paste porcelain was a type of artificial porcelain that lacked the ingredients found in true, or hard-paste, porcelain. One of these ingredients, known as kaolin, was not discovered in France until the second half of the eighteenth century and all French porcelain produced before 1770 was soft-rather than hard-paste.”[1] Traditionally, porcelain bears a maker’s mark or trademark symbol on the bottom. One of the most famous examples of this would be the Meissen double-crossed blue sword emblem that has long graced the bottom of their pieces.

Italy, Baroque Period: One of the most unique pieces in the collection is the Baroque-Style Jewelry Cabinet, from Capo di Monte, Italy. The Capo di Monte Manufacturary, sometimes spelled Capodimonte, was known for using soft-paste porcelain.[2] Though the year is unmarked, the piece certainly falls into the archetypical category of the baroque period, known for intricately detailed and over-the-top artistic creations. The functionality of this piece sets it apart from the others since a jewelry cabinet/box might be used daily, whereas a tea set or vase might not have a use beyond being pleasing to view. Another interesting element about this piece of functional decorative art is the color choices. Along edges the signature gilding is present, but the porcelain has been enameled with a warm brown hue, leaving spaces of exposed white between gold and brown. It is also interesting that the artist used a deep brown color to sketch the scenes on the decorational panels, only coming in with bright splashes of purple, pink, and teal every so often. 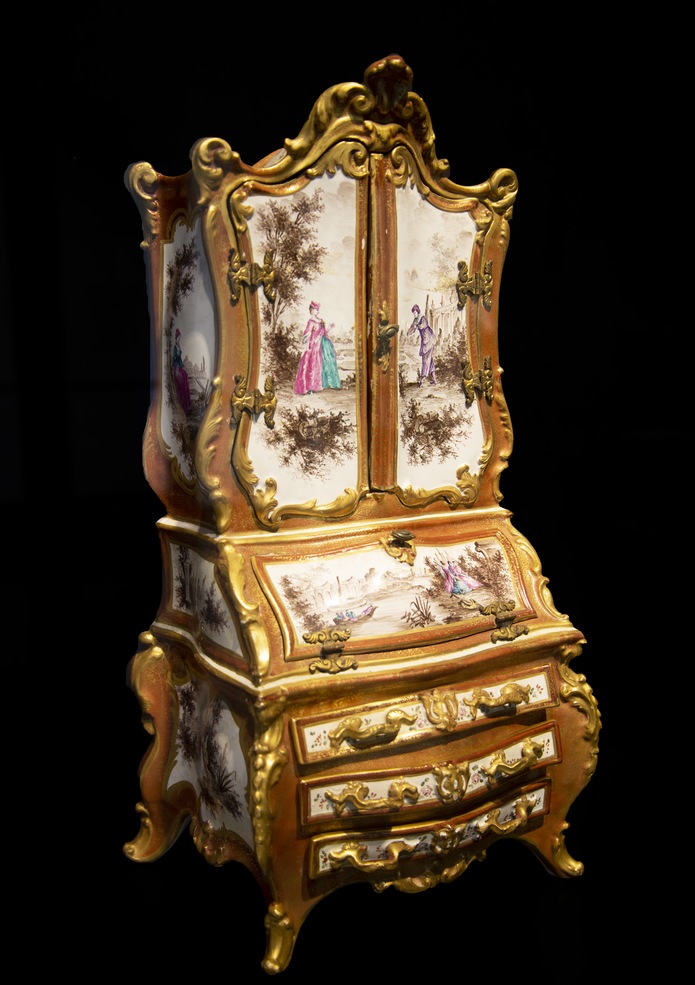 England, 1775: Wedgwood Pottery Company has one of the most recognizable styles in the collection, featuring a Cheese Dome in the iconic “Wedgwood Blue.”[3] This type of ceramic is known as Jasperware, with the particular piece dating back to 1775, Etruria, England, one year after Josiah Wedgwood discovered how to produce Jasperware.[4] Wedgwood was founded by Josiah Wedgwood and Sons ca. 1759.[5] Over his lifetime, Josiah invented three kinds of pottery that would rocket his company to fame: Queen’s Ware, Basalt, and Jasperware. In Barlaston, England, there is a museum dedicated to Wedgwood products throughout the centuries. Through the years the company has teamed up with famous artists, currently, Wedgwood works with Vera Wang. 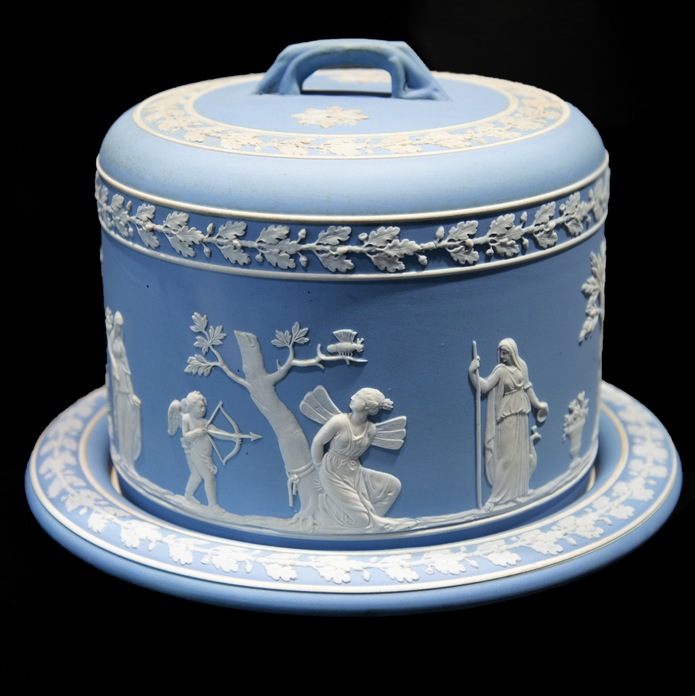 Austria, 1800: Something truly special about this hand-painted porcelain pitcher is that the name of the artist has been recorded, “C. Herr.” Names of porcelain painters and crafters are often absorbed under the umbrella of the manufacturer, in this case, Royal Vienna. Royal Vienna pieces signed by Claudius Herr from the same period have been sold at auction, leading to a clearer probable name of the artist. The Royal Vienna pitcher, c. 1800, Austria, is another example of functional decorative art. The unique aspect of this piece is the painting on the porcelain itself. There was a different process for painting a classical scene upon blank porcelain by hand than glazing boxes, vases, and figurines with unique textures. The more widely agreed upon maker’s mark of Royal Vienna is a minimalist beehive drawn on the bottom of the piece. 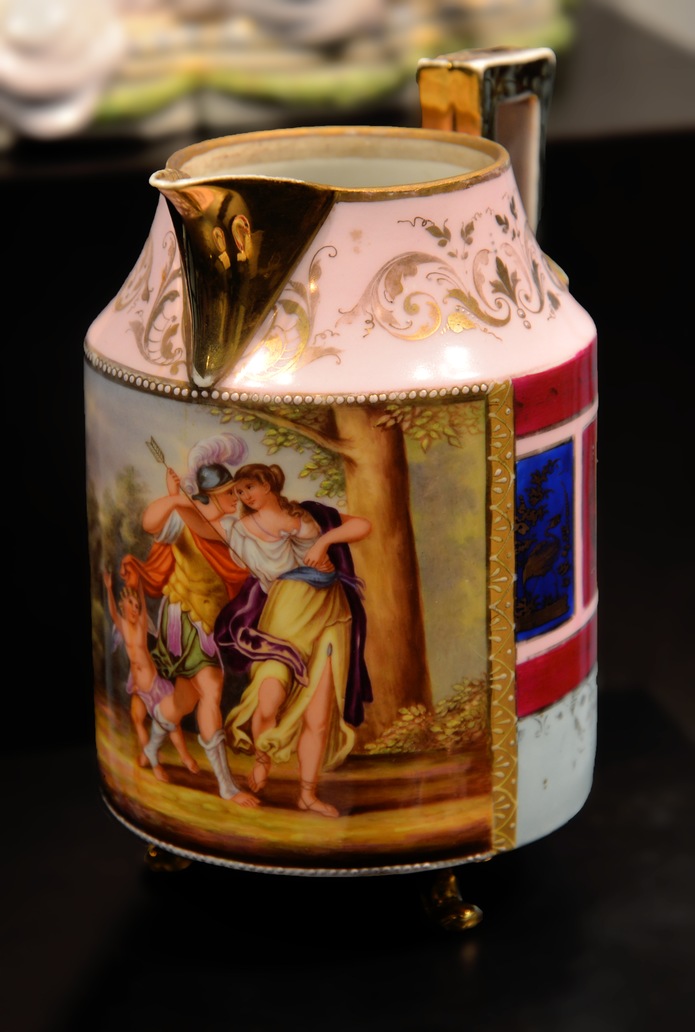 Germany, 1820: The “Apollo and Chariot of the Sun” characterizes the high porcelain figurines of the 19th century, a classic example from the Meissen Porcelain Factory. Figures such as this work of art from 1820 were supposed to convey information about the owner to the person viewing it, and as such something like this would reveal the collector’s interest in mythology. These collectible pieces were used as status symbols. The Meissen Porcelain Factory is most famous for the alchemic discovery of how to produce white porcelain in Europe on 15 January 1708.[6] The company hails from Dresden, a German city remembered in contemporary memory for being fire-bombed in 1945 during World War II, but it had a long history as the birthplace of one of the most successful porcelain manufactures centuries prior. On the bottom of this piece one would find the famous crossed swords emblem of the Factory, “one of the oldest continuously used trademarks in the world,”[7] according to their website. 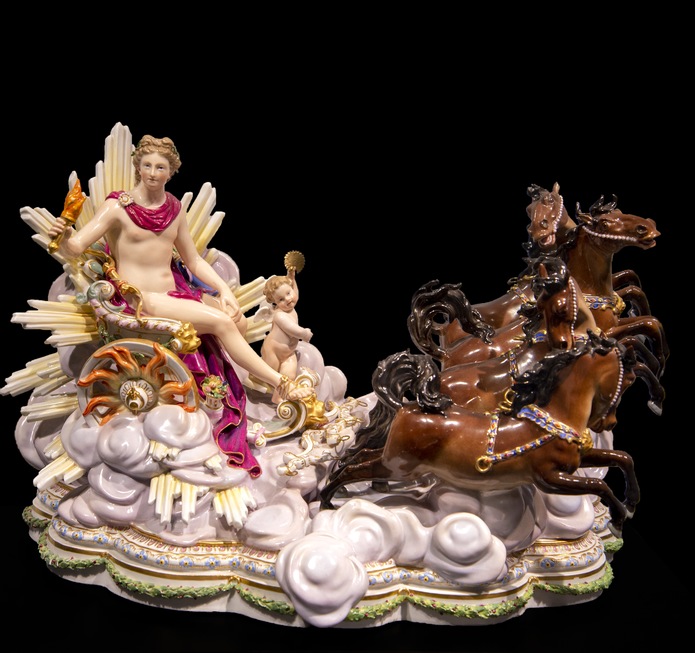 France, ca. 1850s: The collection features an especially interesting set of Limoge Factory vases based on scenes from Harriet Beecher Stowe’s famous book, Uncle Tom’s Cabin. Interestingly, the front page of Stowe’s website features a picture of a very similar Limoges spill vase to the ones in the Fragile Beauty collection at MOAS. The story is summarized on the website as an opening:

“On the Shelby plantation in Kentucky as two enslaved people, Tom and 4-year old Harry, are sold to pay Shelby family debts. The story focuses on Tom, a strong, religious man living with his wife and three young children, and Eliza, Harry’s mother. When the novel begins, Eliza’s husband George Harris, unaware of Harry’s danger, has already escaped, planning to later purchase his family’s freedom. To protect her son, Eliza runs away, making a dramatic escape over the frozen Ohio River with Harry in her arms. Eventually the Harris family is reunited and journeys north to Canada. Tom protects his family by choosing not to run away so the others may stay together. Upon being sold south, he meets Topsy, a young black girl whose mischievous behavior hides her pain; Eva, an angelic, young white girl who is wise beyond her years; charming, elegant but passive St. Clare, Eva’s father; and finally, cruel, violent Simon Legree. Tom’s faith gives him the strength which carries him through years of suffering. The novel ends when both Tom and Eliza escape slavery: Eliza and her family reach Canada, but Tom’s freedom only comes in death. Simon Legree has Tom whipped to death for refusing to deny his faith or betray the hiding place of two fugitive women.”[8] 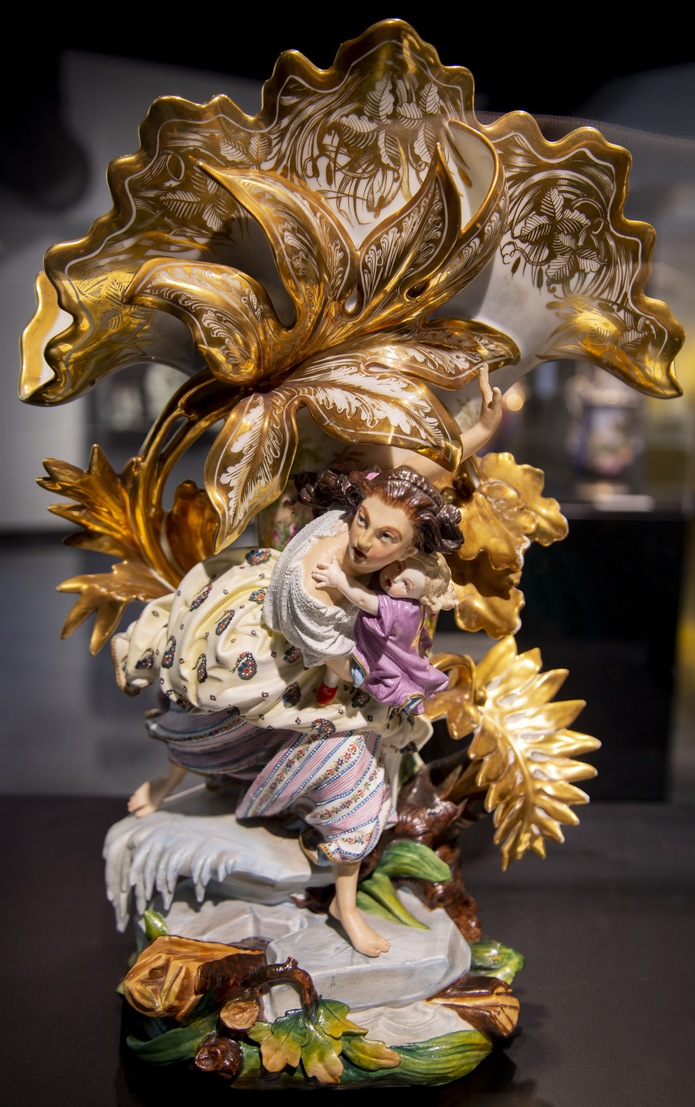 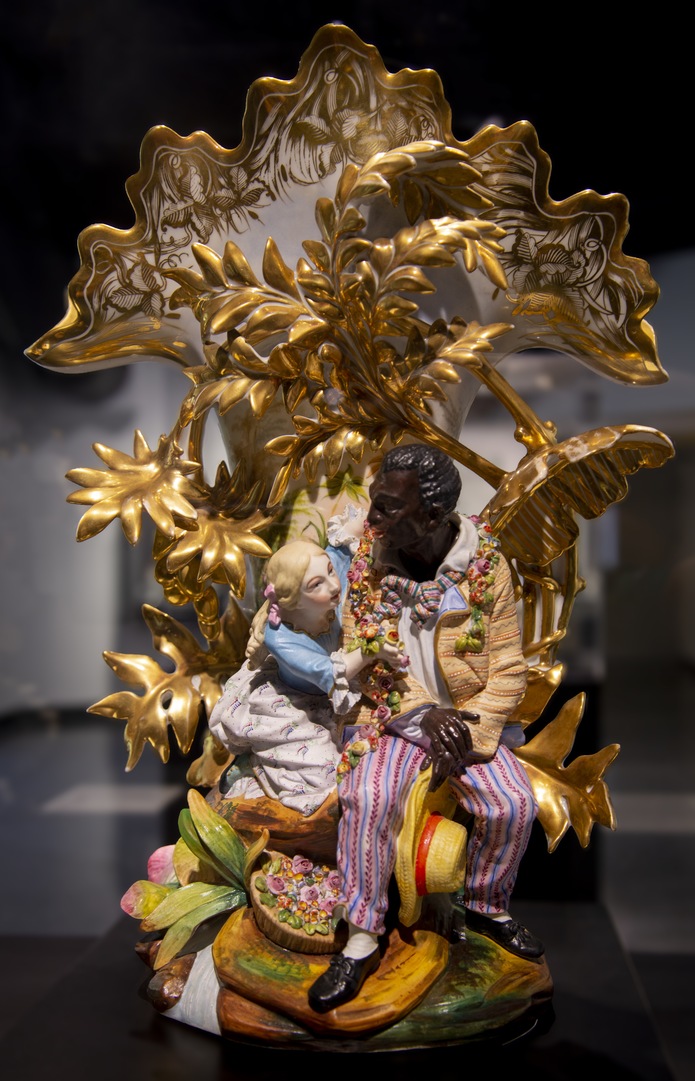 This brief summary helps give clues to what the two vases are about. Even so, how did an American story find its way into 19th century French porcelain? According to Harriet Beecher Stowe’s website, “Uncle Tom’s Cabin was a runaway best-seller, selling 10,000 copies in the United States in its first week; 300,000 in the first year; and in Great Britain, 1.5 million copies in one year. In the 19th century, the only book to outsell Uncle Tom’s Cabin was the Bible. More than 160 years after its publication, Uncle Tom’s Cabin has been translated into more than 70 languages and is known throughout the world.”[9] An interesting thing is that these fine Limoges vases depicting scenes from Stowe’s novel are actually super expensive fan-art. Limoges Factory is still in production today, primarily turning out porcelain boxes.

Northern Ireland, 1895: In a North Irish village on the banks of the Erne River is the home of the Belleek Pottery Company,[10] where the Finner Flower Pot was created ca. 1895. Despite the lack of vibrancy, the flower pot is one of my favorite pieces in the collection. This piece of white-throughout porcelain might at first seem to lack the vividness of the other pieces in the collection, but in fact, it showcases a specific type of pearly glaze that gives it shine. It is because the flower pot isn’t overtaken with color that the thinness of the flower petals stands out so well, each slightly thicker than the width of a sheet of paper. The technique of attaching pieces like the artist has done with the flowers is called “sprigging.” The detail of the coral handles is an homage to the proximity of the water to the place the pot was crafted. The combination of the glaze and the thin porcelain made Belleek rise in popularity. It is still in production today. 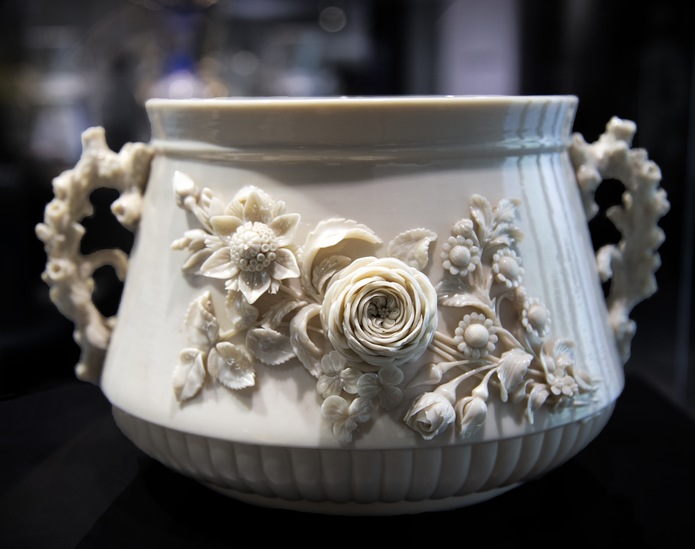 Spain, 1995: Lladro, being a more modern company, prominently advertises the name of the creator, a detail that is lost to time for several other porcelain artists. Antonio Ramos’s Allegory of Spring makes such an impact among the rest of the Lladro pieces because of the sense of movement it conveys. Another detail that sets it apart are the applied floral sprigging detail on the two women, which have more vibrant color than the rest of the glazes used in the works beside it. This piece is from Spain and was crafted in 1995. Originally, the founders of Lladro were inspired by the other European masters of the craft, Meissen, Sèvres, and Capodimonte, all of which are featured at MOAS in one form or another. Lladro, a maker of highly collectible porcelain art, opened its doors in 1953, making it the most contemporary of the manufacturers in the collection. It sports a history of having its own collector club established in 1985.[11] 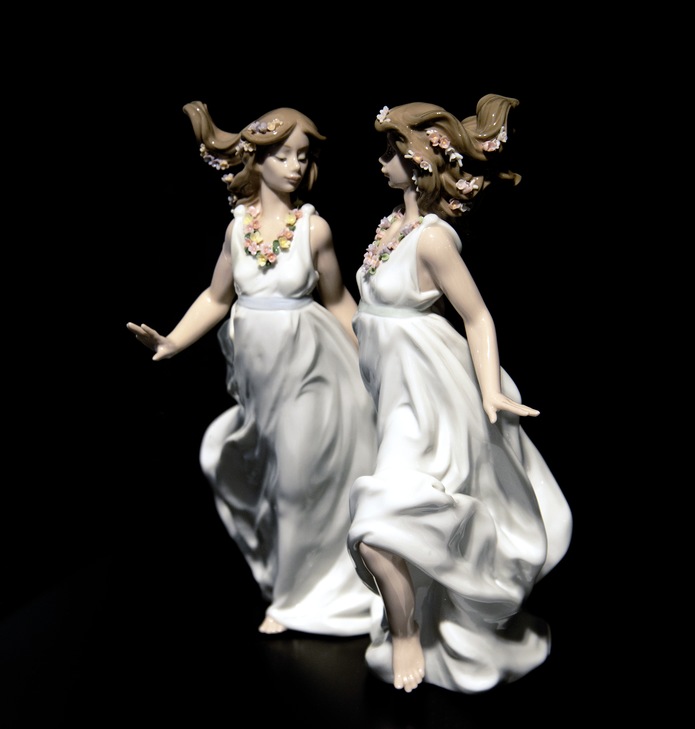 Spain, Lladro – Antonio Ramos, Allegory of Spring, 1995, Hard-paste porcelain,
In honor of Jerry Doliner whose love of Lladro is evident in this collection.

Fragile Beauty: Masterworks of Porcelain and Glass from the Collection

Highlighting centuries of fine workmanship in porcelain and glass, this exhibition brings together some of the most beautiful pieces in these media to be found in the MOAS collection. Decorative arts are particularly well-represented in the Museum's collection and visitors will be impressed by the wealth of intricate detail and stunning craftsmanship displayed by these fragile, sculptural pieces. With references to artistic tastes of the past, they represent traditions in porcelain and glass that have long since given way to primarily streamlined Modernism.