Female artists have created art throughout history, and yet sadly, their work has not always been as acknowledged as that of their male counterparts. Women artists were frequently challenged due to gender biases in the mainstream fine art world. They often encountered difficulties in training, traveling, trading their work, and gaining recognition. Women Painting Florida will feature works of art dating as far as the 1890's with scenes depicting everything from the wilds of Florida and historical monuments to everyday genre scenes of life in the sun. The Women Painting Florida exhibit will be closing on June 25, 2017. 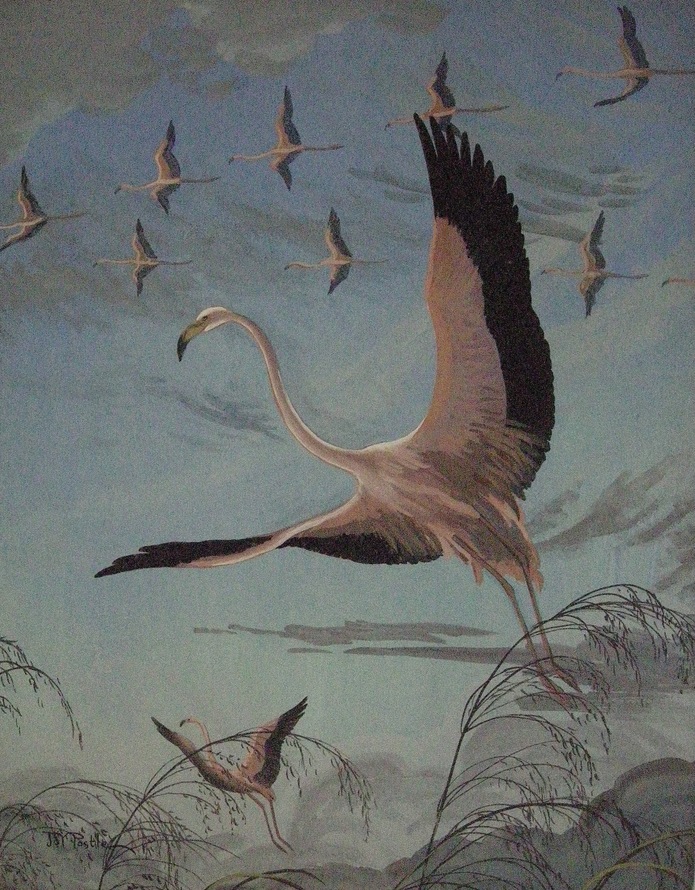 A fantastic painting in the exhibit by pioneering American environmental artist, Katherine Joy Postle (1896-1989), features a unique perspective of flamingos in flight. The artwork titled, Flamingoes, ca. 1940, captures this rare Florida bird in the style of gouache watercolor. Katherine was born in Chicago to architect Oliver Hambleton Postle and Mary M. Brown. Both parents raised her to have a great admiration for aesthetic achievement, and as an adult, she gained respect as an interior designer and artist while living in Boise, Idaho. She traveled the countryside with her journalist husband, Robert Blackstone. They purchased a travel trailer they named the “Brownie House”. The couple eventually arrived in Florida in 1934 and lived a nomadic lifestyle of camping, hiking, and bird watching. She became a great chronicler of the Florida environment and was enamored with Florida’s great offering of birds. She and her husband settled down in a home with a studio near Gotha, Florida. In Flamingoes, ca. 1940, she captures an adult flamingo as it has just lifted off in flight. Her unique perspective has the viewer looking up at the majestic bird as if they were hiding in the brush. In the background, dozens of flamingos are seen in full flight. She pays particular attention to realistic details of flamingos, a rare bird seen only at the very southern tip of the Florida peninsula. It is interesting to note that Joy Postle made a living at painting wildlife scenes at a time when female artists were seen as just enjoying a genteel hobby. 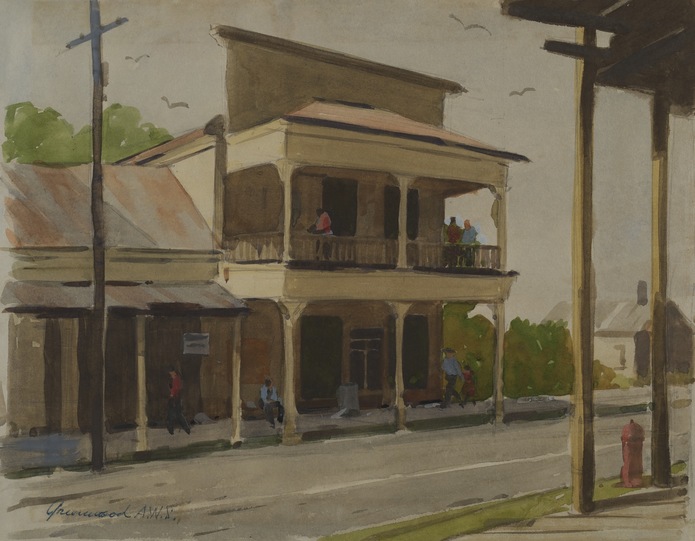 “Main Street, Cedar Key, Florida,” ca. 1950, by Marion Greenwood, depicts a street scene of Cedar Key, one of the most unique historic towns in Florida. Marion Greenwood was born in Brooklyn, New York, on April 6, 1909, and died in Woodstock on August 20, 1970. She was an American social realist artist who became popular starting in the 1920s. Marion was the first American woman to receive a painting commission for a mural painting by a foreign government. She painted a fresco depicting Tarascan Indian life at a university in Mexico. Marion became renowned in both the United States and Mexico and is well known for her powerful murals. She worked as a WPA artist and later was appointed as an artist war correspondent in World War II. Marion also practiced easel painting, printmaking, and frescoes showing gritty scenes of working classes or insightful portraits. In 1950, she traveled to Cedar Key, Florida, and captured the unique architecture of the many historic buildings that line Main Street of this once traditional old style-fishing village. Marion also includes local residents going about their daily lives on this poor, rural, and remote island on the West Coast of Florida in Levy, County. This coastal fishing village has a colorful history, never averaging more than 700 residents in the American census. Even today, a visitor to Cedar Key will immediately notice the feel of a small fishing community stuck in another time.

Closer to home is the depiction of the ruins of the largest slave plantation in Florida by Elsie Marie Bates Freund (1912-2001). This watercolor on paper was created in 1960. As a five-year-old child, Elsie knew she wanted to be an artist. She became known for her artistic jewelry, watercolors, and textile work. Growing up in Taney County, Missouri, she raised enough money to enroll herself in the Kansas City Art Institute and later married artist Louis Freund in 1939. Elsie and Louise created a summer art institute in the Ozarks in an old house they purchased and renovated in 1940. The summer art school that the Freund’s created so long ago is still the inspiration that has kept Eureka Springs a thriving art community today. 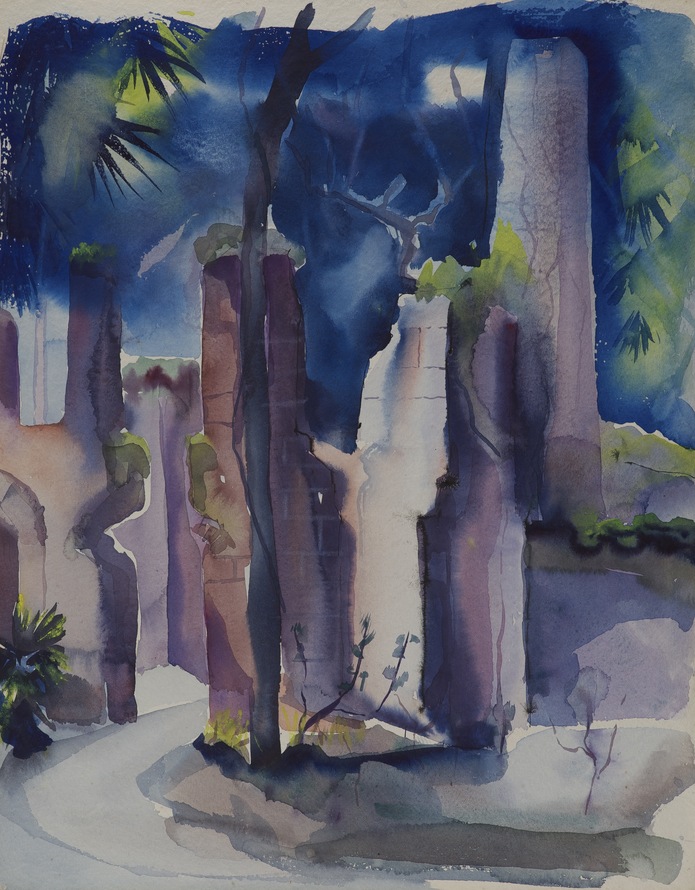 In 1946, Elsie’s husband Louis took a position as chairman of the art department at Stetson University in Deland, Florida. Sometime in 1960, Elsie visited the mystical looking ruins of Bulow Plantation on the Volusia/Flagler County border. In this watercolor titled, “Bulow Ruins,” ca. 1960, she captures the towering ruins of the sugar mill against a deep and dark blue sky. She depicts a pathway that leads the visitor into the center of the ruins giving the viewer a perspective of the massive coquina ruins. Back in the early 1800’s, Charles Wilhelm Bulow and his son moved from Charleston, South Carolina, to set up a sugar plantation with some 300 slaves for the production of molasses for rum. Situated on Bulow Creek, John Bulow inherited the property when his father passed away not long after acquiring the land. In December 1831, the famed naturalist and bird artist, John James Audubon, was a guest at Bulowville plantation. The ruins depicted by Elsie are not created by the ravages of time but by the destruction of the Seminole Indians. In January 1836, at the beginning stages of the Second Seminole War, a Seminole war party swept into the region and burned all of the plantations along the Halifax River area including Bulowville. 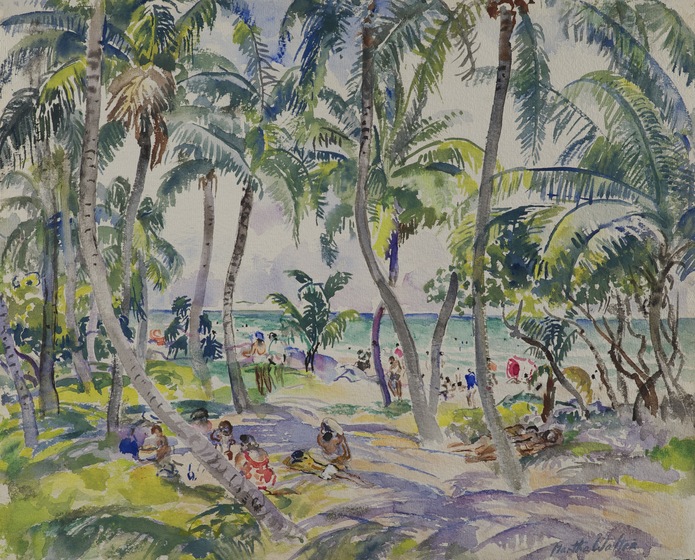 In 1950, a well-known American, Pennsylvania impressionistic painter, named Martha Walter, visited Miami Beach. There, she rendered a watercolor of an everyday scene on the warm and toasty man-made beach. Martha was born in Philadelphia in March of 1875. She began her career at the Pennsylvania Academy of the Fine Arts, where she won the school's Toppan Prize and Cresson Traveling Scholarship. This allowed her to travel throughout various countries in Europe. A painter of indisputable talent, she specialized in light-hearted, colorful beach scenes, especially of Gloucester, Coney Island, Atlantic City, and the French Coast. As seen in this watercolor called “Miami Beach,” ca. 1920, many of Martha’s paintings seem more concerned with color than form. Rich, saturated colors of greens and purples dominate the painting. Her figures are elusive and not defined and are shown enjoying a hot day. It would be easy to say that the figures on the beach seem somewhat mysterious, and this is what gives the work an abstract feel. Some of the sunbathers are seen enjoying the blanket of shade provided by a tangle of coconut trees in this idyllic scene. The 1950s were one of many golden ages for the resort city of Miami Beach. Could she have been a guest at one of Miami Beach’s newest and grandest luxury hotels ever built, the Fontainebleau? Martha Walker never married or had children and passed away in 1976. She lived to be 100 years old and painted up until her death.

Women artists who painted in Florida are well represented in the collection at the Cici and Hyatt Brown Museum of Art. These artists fell in love with the same aspects of Florida as their male counterparts. Now some of the most important pieces of the collection are in one gallery so that Museum visitors can learn about the important contributions made by these influential artists. These women artists rendered significant scenes of flora, fauna, culture, and historical places that contribute to the overall history of our great state.