A Treasure from Art Storage 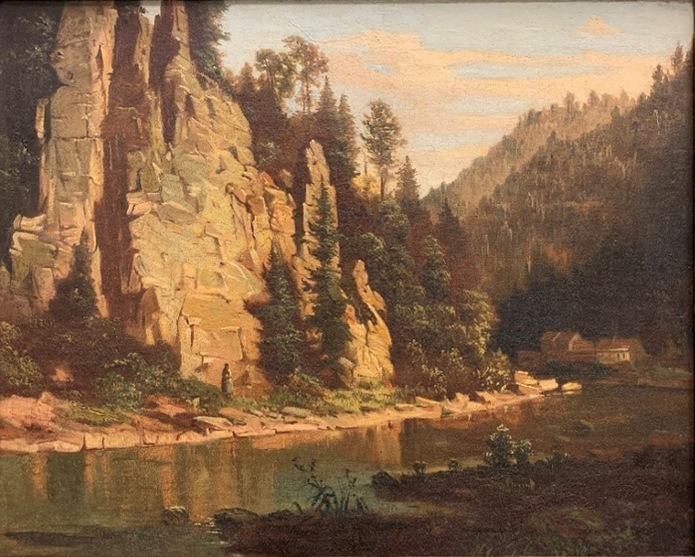 In surveying the racks of paintings in the Museum of Arts and Sciences’ art storage a while back looking for works to include in a possible exhibition on landscape art, I came across a medium-sized scene of a river view focused on a mill in the background. The middle ground of the painting was dominated by a steep granite cliff with the many layers of stone chiseled in an impressive pattern made by nature. The wooded landscape following the curve of the riverbed was rendered in deep, dark tones familiar to 19th-century French landscape art and I was about to guess the artist when I stepped closer and noticed a small brass nameplate nailed to the ornate gold leaf frame. It read “Le Moulin chez Ornans, G. Courbert 1867.”  "Of course, it is Courbet!," I said as I also found the artist’s signature in the right corner. One of the great joys of curating a collection as deep as that at MOAS is wonderful surprises like this. MOAS has a landscape painting by one of the most important 19th-century artists, one who is credited by many art historians for breaking artistic boundaries that led to most of the great late 19th-century art movements such as Impressionism, Post-Impressionism, and beyond.

Gustave Courbet’s early training was in the classical French academic tradition and his mentor was Jean-Antoine Gros (1771 – 1835) who had also been the teacher of Jacques Louis David (1748-1825) the great painter of the French Revolution. But early on Courbet rejected the smooth, polished painting associated with the French academic painters and preferred bolder, spontaneous brushstrokes, deep contrasts of light and dark, and a rough paint texture. All of these helped him achieve what he felt was a more authentic style of painting that reflected what he saw in the world around him. 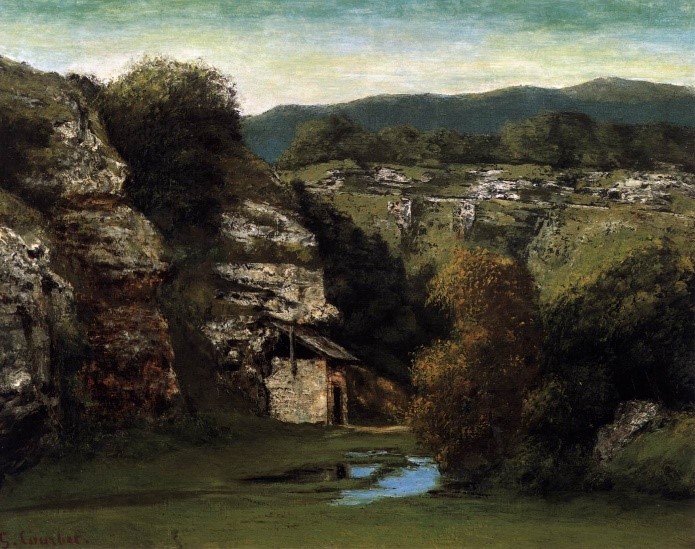 This was key to Courbet who rejected the sentimentality of Romanticism, the contemporary movement flourishing in his era, and felt that artists should paint what they saw in their daily life.  Coming from a humble farming background, this world was often that of the rural farmers and peasants of the French countryside. Or sometimes it would be the many views of the Loue river available to him in his native region of Ornans, and many different canvases survive to this day representing the various different views up and down the river near the mill at Ornans.

But beyond his landscapes, Courbet is most famous for advocating strong, unembellished scenes of his countrymen performing the hard, often backbreaking every day labors that kept the nation moving forward. His approach was very controversial and not immediately accepted because the French public was not yet used to seeing common farmers, laborers and workers elevated to such a status in fine art. Grand History paintings showing the great events of the previous revolution or refined portraits of the esteemed members of the New Republic were much more in demand.

Nevertheless, Courbet’s entries in the French Salon of 1850-51 -- The Stonebreakers, The Peasants at Flagey and A Burial at Ornans – brought him instant acclaim and this new art movement called Realism swept the country. The titles of these works indicated the humble scenes he had brought to the great competition that was the Parisian academic salon. But nothing prepared the public for the extreme virtuosity he brought to paint on canvas and the degree to which his works endowed a nobility and dignity to the basic, essential labors performed by the common working man. It seemed the ideals of the revolution fought decades before were finally realized and his paintings became highly sought after. Gustave Courbet had achieved the rare status of celebrity artist. 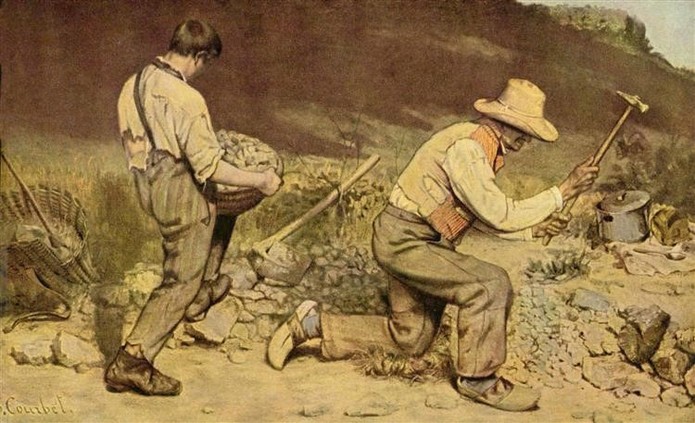 Of the three paintings Courbet exhibited at the Salon of 1850-51, A Burial at Ornans drew the most attention, as it was bound to do based on its size alone. A huge painting – 10 by 22 feet – it depicts the funeral of Courbet’s grand-uncle in September of 1848 in his hometown. Defying conventions for both history paintings and funerals, Courbet painted the people who attended exactly as they appeared, virtually life-size and close up to the picture plane, and included everyone. (Hint: pull up the painting on the Internet to get a true sense of its scale). No models were used and even though everyone is obviously in their Sunday best for this somber event, nobody appears excessively “cleaned up” or aggrandized. This is apparent even to our current eyes as the townspeople of Ornans appear as stoic and monumental as the granite cliffs behind them but, nevertheless, rural in every sense of the word. The scene is a realistic representation of them, and of life in Ornans. And, as such, it drew both praise and condemnation. It lacked all the sentimental rhetoric that was usual at depictions of such solemn events. An important corner was turned in the history of western art. Everyday people and scenes were worthy of great paintings on a heroic scale, to be painted exactly as they were in that particular time and place with every bit as much skill and attention as official portraits or great historical events. The implications were enormous for the future of art and Courbet knew it. He is recorded as having said, "The Burial at Ornans was, in reality, the burial of Romanticism." ( Mack, Gerstle, (1989). Gustave Courbet. Da Capo. p. 89)

And that is how a modest painting of a river view in France in the collection at MOAS is related to one of the most important paintings in 19th Century art. In his commitment to painting only what he could see (which would become the hallmark of the Impressionists a generation into the future), he rejected academic convention and the Romanticism of the previous generation of visual artists. He also inspired future artists with his choice of subject matter rendered highly realistically and unapologetically. Courbet occupies an important place in art history as an innovator and as an artist willing to make bold social statements through his work. The Museum of Arts and Sciences is lucky to have "Le Moulin chez Ornans" by Gustave Courbet, a signature rendition of his much-beloved riverbank at Ornans and a connection over the centuries to a watershed moment in the history of art.