Looking back now, it's hard to believe how fast the project to design and build the Cici and Hyatt Brown Museum of Art really went. We got very lucky that we were the first of many major construction projects in the area to begin so not only did we have lots of vendors and contractors keen to work on our project but once the other projects were announced they were also keen to work as quickly as possible so they could move onto other larger projects too!

We were in a pretty unique position when designing the Brown Museum as we knew exactly where it was going to be built, but also that we knew exactly what art would be on display inside, and with the common theme of Florida landscapes, we had some sense of the color palettes and stylistic cues the new building would need to be sympathetic too. 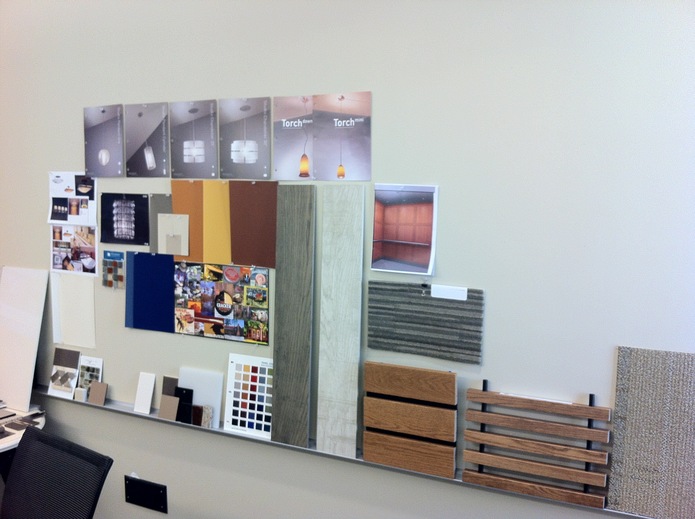 I'll save the story of the exterior of the building and how it came to look as it does for another post, but that decision was relatively easy compared to when we picked the interior colors, finishes, and decorative elements to go inside the building. Lots of words and ideas had been thrown around with the design team, and by this point we were working with the interior design specialists on the architectural team as well as engineers, electricians, and all the other skilled professionals it took to pull the building together.

The picture I am sharing today shows the meeting we held with the architects when they pulled all the conversations and ideas we had thrown at them together and produced a whole range of materials and color concepts for us to see and touch to start narrowing down how the interior would look. For every element that needed to be installed, we would have several options. By producing this display of swatches and samples we could place them next to each other to see how they worked, or even walk on the flooring samples to see how they felt, whether they would be robust enough to stand up to the rigors of being used every day, or whether they looked the same in real life as they had in the brochures we originally used.

Some of the decisions were made from seeing the samples in the picture, whereas some others needed more research. We were all impressed with the ceramic tiles that looked like sawn wooden planks that were suggested for the floors of the main two rooms of the Museum, but we wanted to know how they looked when installed in larger numbers. We found out that the only place locally where we could see them in use was a department store in the Dr. Phillips area of Orlando, so one day several of the project team drove over to go and see it in person and decide if it was what we wanted. Thankfully it looked great installed in the store and seemed to be very hard-wearing, so we made the decision to install it in the Museum.

Looking at that photo today, amazingly over seven years after we held that meeting, I can remember the excitement we felt getting to choose how the interior would look, and can see many of the finishes and fixtures we chose that eventually made it into the Museum. Next time you visit the Brown Museum pull up the photo and see if you can spot which ones we chose as they're all still there and working just as well as we had hoped.