I'm often asked what my favorite object or painting in our collections is and while it would be impossible to answer that, this old railroad sign on display in the Root Family Museum Train Station is definitely one of the most surprising and the one I always make sure I show people when I give tours of the Museum. 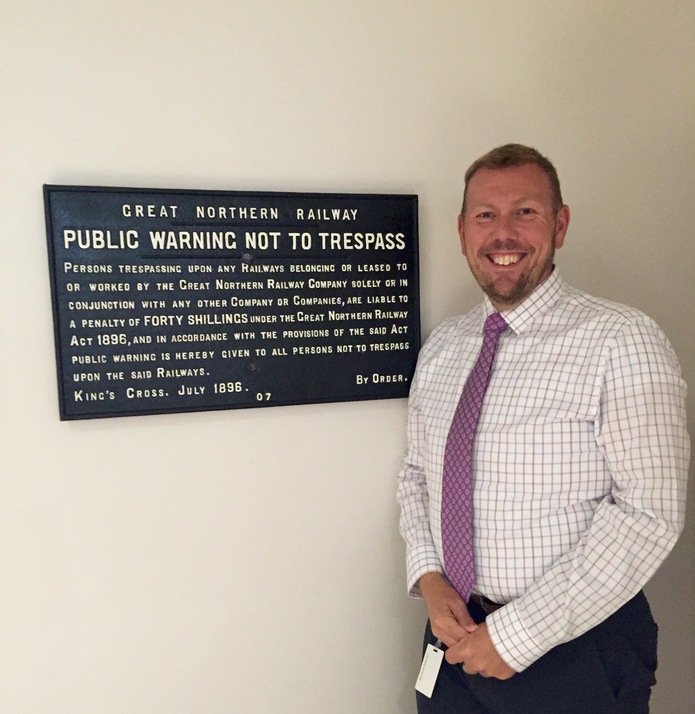 The sign itself is nothing particularly rare or special, other than it's a 19th-century warning sign from a long-defunct railroad company that operated in England between 1846 and 1923. But why it is so special to me, and why I was so surprised to find it when I first came to MOAS, is because it's from the company that ran the railroad service that ran through my hometown of Boston, Lincolnshire in England!

Although we have no way of knowing where on their many hundreds of miles of lines the sign would have been found, the Great Northern Railway was the rail company who effectively ran all the main and local routes from London up to the north-east and east coast of England right up into Edinburgh, Scotland. Indeed, the famous 'Flying Scotsman' service originated as a GNR service between London and Edinburgh. The train station I used when growing up in Boston was built by the GNR and even the pub outside its entrance, once frequented by all the railroad workers, was still called 'The Great Northern' in honor of its origins.

When we closed the Root Family Museum for refurbishment and renovation in 2013 this was definitely one object I really wanted to come back on display in the new and improved Train Station. As with many objects on display there at the time, the sign was in bad condition - the main reason we enclosed the Train Station and added a big HVAC system was because of the constant damage the outside air was doing to the objects and carriages on display in there - so we had the sign sandblasted back to bare cast iron to remove all the corrosion and blemishes on it. But once we were ready to reinstall we were left with a dilemma of whether to install it in its raw metal form or try to replicate how it looked back when it was first made.

Many of you may not know this, but when I was still living in the UK I spent several years working as a curator at the National Railway Museum in York, one of the world's largest transport museums and the home to some of the most important railroad artifacts in existence. Knowing they would know exactly what we needed to do with the sign I sent a message to a couple of my old colleagues and the response was incredible. Within 24 hours I had scans of the original paint specification guides from the GNR from when the sign was made, along with recommendations from the supervisor of the museum's painting and livery workshop on what modern paints he would use and how he would perform the repainting. We also received a copy of the Great Northern Railway Act of 1896, as mentioned on the sign, and even were sent an analysis of why the sign was needed and what version of the sign we had! 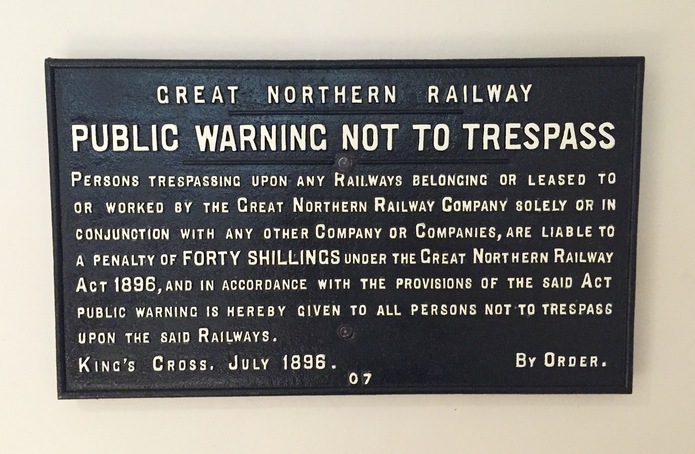 Seeing this sign in the Root Family Museum Train Station always brings a smile to my face for many reasons. It reminds me of that first walk around the Museum when I discovered it tucked away in a corner, slowly rusting and going unnoticed. It reminds me of my childhood in Boston and how we took it for granted that we were still walking streets and using buildings from over 100 years ago that reflected when my hometown was a bustling industrial port that saw substantial rail traffic. Most of all it reminds me of my days working at the National Railway Museum, the friends I made there, and how when you work in museums you never know just when in your career the knowledge and connections you made along the way will come back to you.

Oh, and if you want to know just what a big deal trespassing onto railroad property was in 1896, that fine of 40 shillings would be more than two weeks wages for a laborer in England at that time. Even today a 40s fine would be the equivalent of around $850 in modern money. And for the Harry Potter fans out there, notice where the GNR's head office was?