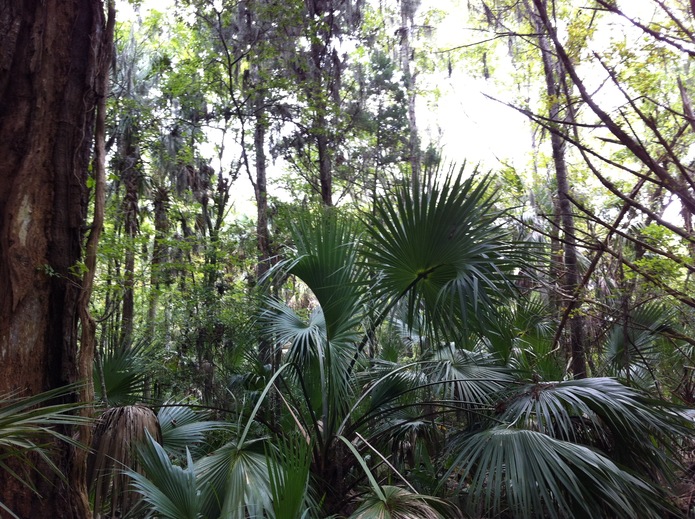 Recognize where that picture was taken? It's hard to believe it but tens of thousands of our visitors have stood in that exact spot without knowing it!

When we were planning the Cici and Hyatt Brown Museum of Art, we had a number of 'must-haves' for the building right from the start of the planning process. After the issues with flooding that had damaged the main MOAS building back in 2009, top of everyone's list was that the new museum had to be safe from flooding. This meant that our architects and civil engineers had to understand the land available to us for the new building and make sure we were building on the highest land we had available. We knew we wanted the new museum to be close to Nova Road to help with visibility, so we identified the area that was both high, dry, and could accommodate what we already knew would be a 26,000 square foot building.

As the design phase of the building progressed we were able to identify the exact placement of the building on our land, but still had lots of questions about whether the land itself was suitable, and how close the building would be to our neighbors and Nova Road. So one Sunday, armed with a GPS unit and several ski poles to help with pushing down any vegetation we encountered, a group of us including MOAS trustees, architects, construction managers, civil engineers, Cici and Hyatt Brown, and myself, ventured into Tuscawilla Preserve to locate where the new building would sit.

So what you see in the photograph is the exact spot where the front door of the Cici and Hyatt Brown Museum of Art sits today, taken from the angle where we would be looking into the body of the building! It was definitely a useful exercise as it gave us a sense of how close the new museum would be to the road, and identified some issues we would need to address in clearing the site that we hadn't considered at that point.

Work progressed quickly in the area, notably surveying all the trees and plants to understand which historic trees we would need to leave in place and work around - you can see these around the site today, a few of which you can see we had to bend the road around! We were also able to log how many native trees and plants would be lost in the clearing and make sure they were replanted elsewhere in the landscaping, plan to maintain the ecological balance, while also removing the many invasive plants that had begun to overrun parts of the park at the expense of the natives. We were also able to identify which native plants were underrepresented in the park and make sure they were added into the planting plans during construction. A constant mantra throughout the process was that everything related to the museum construction had to respect Old Florida, as depicted in the paintings that would soon be housed there.

So next time you come to visit the Brown Museum, remember that just seven years ago this would have been what you had to push your way through to get into that space!