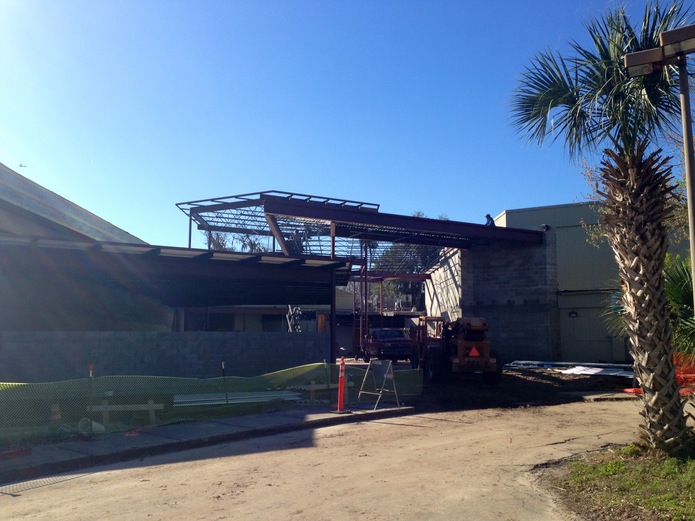 This week I'm sharing a couple of photos from the construction of what is today the Lowell and Nancy Lohman Family Planetarium. The first is a shot from February 20, 2014 that shows the planetarium and what would become the Education Department offices as the installation of all the structural steel was being completed. The second photo shows the scenes inside the planetarium 12 weeks later on May 15th. 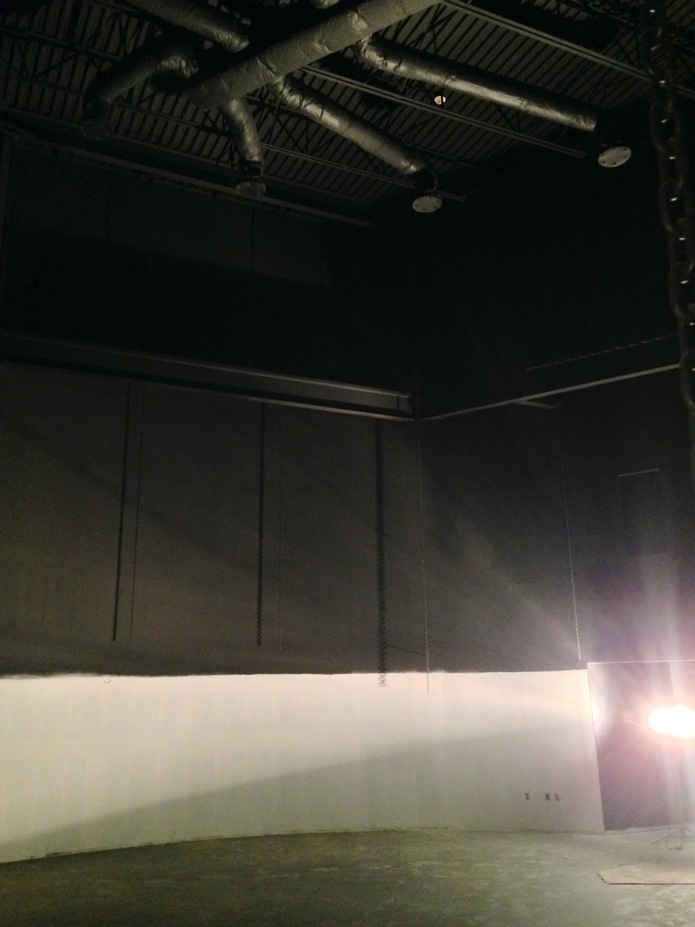 At this point the interior walls and ceilings of the planetarium were complete and we were waiting for the most nail-biting part of the whole project - installing the new, improved dome! This was a particularly nerve-wracking time for our construction partners, Hall Construction, as they had to build a circular interior wall for the dome to sit on and could only afford to be a couple of inches out from being perfectly round for the dome to be seated correctly. Thankfully their work was as impeccable as always and the dome, which was added in sections and bolted together, went in with no problems at all.

The story behind the final location of the Lohman Planetarium is one I love to tell people on any tours I give around the building and came about thanks to the ingenuity of current MOAS Vice President and our architectural advisor on those projects, Bill Chapin. When I arrived at MOAS in 2012 the idea of rebuilding of our old West Wing was pretty much deemed a dead project due to lack of funding, but changes to the eligibility for the FEMA grants related to rebuilding flooded buildings changed and suddenly, from out of nowhere, we received notification that we would be getting the funding we needed and were expected to commence with the project immediately. Ordinarily, this would be a time for celebration, but with me having only arrived at the Museum a couple of months earlier and the Museum having just announced the project to build the Cici and Hyatt Brown Museum of Art, it came as quite the shock! Thankfully we were able to build great teams to work on both projects and the recently renamed L. Gale Lemerand Wing came out great.

One of the big questions over rebuilding that wing was what we were going to do about the planetarium. In the old West Wing it was tucked away deep in the old winding corridor that linked the old galleries, and operating it outside of regular hours meant opening up the lobby and the whole wing. For that reason, and because I had already recognized how popular it was with our visitors despite only hosting two shows a day back then, I was very keen for it to be moved to a more prominent place, and if possible one that allowed us to operate it independently of the rest of the Museum. Several ideas were thrown about, including building it as a totally separate building out in our parking lot, but nothing stood out as the right location.

So in one meeting with the architectural and construction teams, Bill Chapin had a total brainwave. We had drawing of the whole building that we were using to plan out ideas, and Bill took a sheet of tracing paper and drew a circle that, to the scale of the drawing, represented the size of the new dome we would be installing. We slid the paper around the drawing to see how the dome looked in comparison to the rest of the building and the 'Eureka!' moment for us all was when the circle fit absolutely perfectly in the space - which at the time was just an unused piece of grass - between the exterior walls of the Root Family Train Station and Auditorium. This was perfect as it not only meant we could work around existing walls, but it gave us an easy way to connect the new building to the main museum so visitors wouldn't need to go outside to see a planetarium show in the event of rain or bad weather. A few more drawings confirmed we had more than enough room for a good-sized lobby and to add the offices for our Educational and Planetarium staff that we wanted to put there.

So next time you come visit the Lohman Planetarium at MOAS, just think of the relief we all felt when Bill Chapin moved that piece of paper around the plans and the dome just fell so perfectly into the gap where it sits today!