Every week our Executive Director, Andrew Sandall is going to share one of the many photos he's taken behind the scenes at the Museum since he arrived at MOAS almost eight years ago. We hope you'll enjoy hearing some of the stories of what has gone on during these past few years of growth and expansion and seeing some sights that only our staff were around to see. 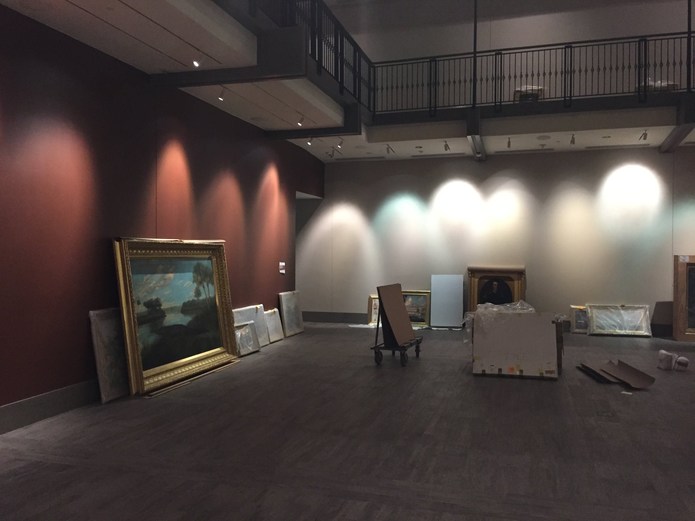 This photo was taken in November 2014, about three months before the Cici and Hyatt Brown Museum of Art opened to the public. Construction had started in January 2013 when the site was cleared and a big mound of earth appeared on Nova Road. I got so many questions about what that was! What it was actually doing was providing a heavyweight over the area the building was going to occupy to compress all the underground vegetation, mud, and rocks to make sure that when the building was put on top it wouldn't sink into the ground because of its weight. Once we got readings that the ground had settled for several weeks we knew we were safe to start construction.

We were finally able to access the building in late 2014 when construction was mostly complete and systems like the air conditioning and security systems were up and running, meaning it was safe to start bringing the art in to acclimatize to the building. We were lucky in knowing exactly what was in the Brown Collection from the start of the project so we had been able to decide what paintings would be on display in every room, and had worked with computer models of the galleries and paintings to ensure everything fitted where we wanted.

What you can see in this picture is a scene from the main permanent gallery at the Brown Museum as we began to bring the paintings in and stage them ready for hanging. The painting of the giant alligator we all know as 'Big Al' had recently been moved over from the main MOAS building - it had been hanging in Root Hall along with details of the 'coming soon' Brown Museum - and I always viewed that as the moment the Brown Museum began to feel real for me. 'Big Al' had been hung in Root Hall the week I arrived at the Museum to become the new Executive Director and it was used as a backdrop for the public announcement of the new museum, continuing to hang there throughout the construction period. When it was finally moved to its new permanent home I knew we were moving into a whole new phase and we would soon be able to share what we had been working on with the public.

But there's another interesting story to be found in this photo. With a project like this, there are some finishing touches that can only be completed by installing them and seeing how they worked. A major decision we had to make was about the many hundreds of light bulbs that would be installed in the building to illuminate the art. We already knew we would be installing LED lighting for both its low power usage and because it generates much less heat and damaging UV light than regular incandescent bulbs. But the decision on which bulbs to use really hung on how 'warm' or 'cool' we wanted their color to be. We could only decide on that by buying samples from across a wide spectrum of tones, installing a few paintings that represented the main color palettes of the art they would be shone on, and seeing what looked best.

So look carefully at the washes of light on that back wall, sat ready for the art to be installed for the test, and look at how many different shades of 'white light' we had to choose from!