Pirate Myth
If you have ever mimicked pirate speak by saying “Arrrgh!” or “Shiver me timbers!” you are incorrect. Pirates never really spoke like that. In reality, no one knows exactly how pirates spoke because they never wrote down their vernacular speech.

Another famous pirate myth is treasure maps leading to buried treasure. There has never been even one documented case of pirates burying their treasure or of a map leading to the hidden loot. In fact, pirates rarely possessed gold – they stole items like tools, rope, food, clothing, and general merchant cargo. If they managed to acquire any money, they immediately spent it in port on gambling, liquor, and women. If pirates did bury their ill-gotten gains on a lonely island, they would never be able to relocate it because changing inlets and shifting sands would make this impossible.

Another favorite myth is that pirates made their prisoners walk the plank. This is a total fabrication made for fiction with no basis in history. If they wanted to get rid of you for breaking ship rules they just threw you overboard or abandoned you on a desert island with no water. 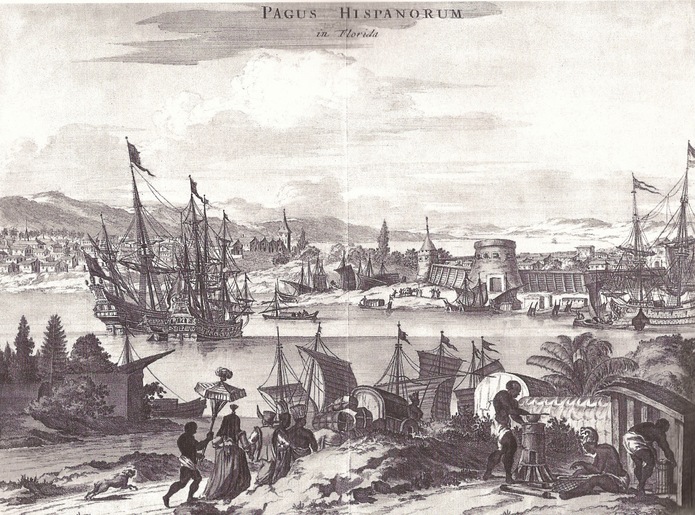 Real-Life Pirates
What about the real-life of pirates? What we know from the fragmented historical record is that most pirates were young men with a life expectancy of around 26 years. Many of them were people who did not fit into normal society and taking to the sea offered a freedom they could not attain in a royal navy or on a merchant ship where mundane routine was the order of the day. Most pirates were sailors from the lower class who became disillusioned with life under unfair and unforgiving conditions.

Sir Francis Drake
One of the first notorious pirates to attack east Florida was Sir Francis Drake who became an English celebrity in his day. Unlike many later pirates, he was an accomplished seaman and navigator, and the first captain to sail around the globe who lived to tell the tale (Ferdinand Magellan was killed before he completed his circumnavigation). The Spanish saw Drake, whom they called the Sea Dragon, as the most ruthless pirate that ever lived. In 1586, while returning back to England on the swift gulfstream current, Drake heard rumors of a tiny outpost on the Spanish frontier in La Florida. After spotting a wooden watchtower on today’s Anastasia Island, he attacked the military outpost with a vengeance. He destroyed the wooden fort, confiscated the soldiers’ pay box, burned every standing building, and stole everything he could lay his hands on. By the time he left, St. Augustine was leveled to the ground. Most of the Spanish citizens survived by escaping into the woods and seeking refuge with the local Timucuan Indians. 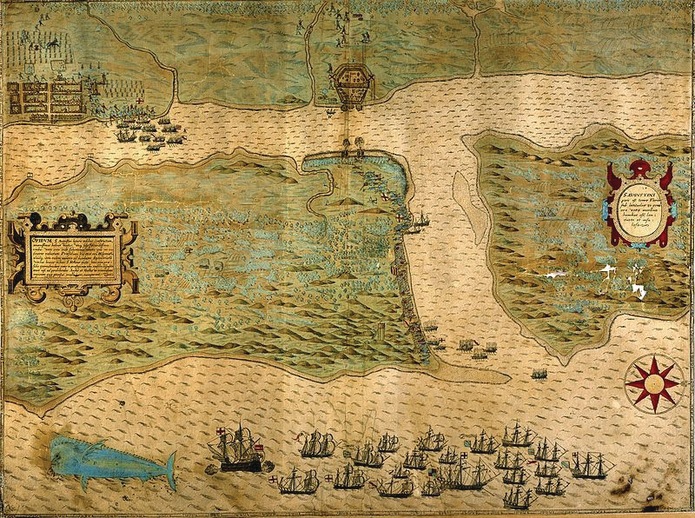 Robert Searles
Another famous pirate to attack east Florida was Englishmen Robert Searles. His attack on St. Augustine caused a lasting and profound change to the city. His crew captured a ship off the coast of Cuba carrying flour to St. Augustine and used it as the ultimate camouflage. As he sailed it into St. Augustine’s harbor, he made the Spanish crew carry on their duties as if nothing was wrong while his men hid below decks ready for action. St. Augustine was always on edge and sent out the harbor pilot just to make sure everything was copacetic. Searles’ crew captured the harbor pilot and forced him to give the all clear signal to the town. Searle and company laid in wait until midnight to make their advance on the city. When midnight fell upon the sleeping town, the pirates came ashore with guns blazing and chaos broke out in the streets.

With little resistance from the Spanish soldiers, pirates pillaged and murdered. They killed over 60 citizens, which represented over a quarter of the city’s population. Anyone who was not of pure Spanish blood was taken captive and sold into slavery. Prominent citizens were held as hostages and were released only when a ransom of food, clothing, and tools was met. Curiously, the pirates did not destroy the city. Witnesses reported the pirates took soundings of the harbor, which meant they intended to return for a second round. It took many months for word to reach back to Spain of the devastating attack. However, the Spanish crown was determined to take action to ensure this would never happen again.

Florida had a significant strategic value to Spain because it protected their trade route from Cuba to Europe. The aftermath of the Searles’ attack resulted in the Spanish finally deciding to dedicate funds to upgrade their defenses and build a massive coquina fort. The Castillo de San Marcos was completed in 1695 and is the oldest masonry fort in North America. Searle’s pirate attack was the last successful taking of the town. Once the fort was completed the city was never defeated again even when facing overwhelming forces. 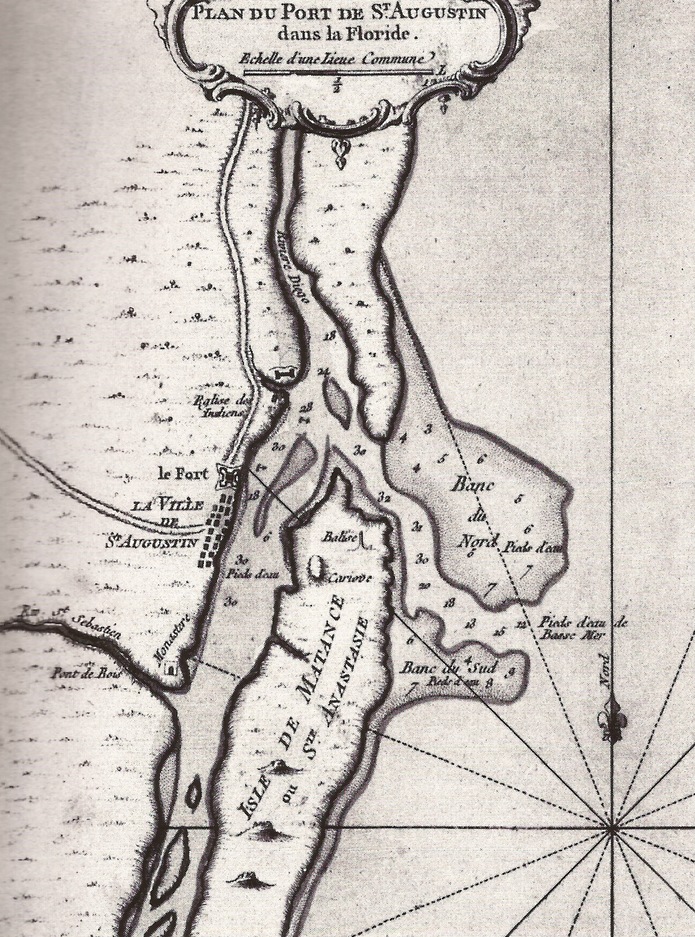 Henry Jennings
The story of the pirate Henry Jennings is remarkable as he is one of the few pirates that actually acquired treasure, and lots of it. In 1715, the Spanish Crown was desperate for money to fund years of on-going wars. The Spanish king ordered the Spanish treasure fleet to set sail from Cuba in August despite the threat of hurricane season. As the fleet neared Cape Canaveral, a hurricane smashed it against the Florida coast. The ships, carrying jewels, gold, and silver, were torn apart in the shallow waters from Port St. Lucie to Melbourne Beach. The royal treasure now sat in shallow water a mere 100 yards offshore. As the survivors tried to get word back to Cuba, the rumors began to spread throughout the Caribbean of the wrecked treasure fleet.

Henry Jennings, a captain and landowner in Jamaica, heard these rumors. In spring, 1716, he gathered a crew and departed from Port Royal, Jamaica, on his ship, The Bathsheba. Upon arriving in Florida, he found the Spanish attempting to salvage the treasure near present-day Sebastian Inlet. He attacked their encampment and stole over 340,000 pieces of eight from the lightly guarded storehouse without killing a single person. He returned a second time and stole more treasure before retiring from pirating.

The early 1700s became known as the Golden Age of Pirates. This is when pirates that we know today, like Blackbeard and Calico Jack, operated. In 1717, the English government finally took decisive action to stop the out-of-control piracy in the Caribbean. The King of England declared a royal proclamation to stop the looting. All pirates who accepted the royal proclamation by signing their names received a royal pardon. The king sent Woodes Rogers, a former pirate himself, to oversee and enforce the proclamation. Henry Jennings signed the royal pardon and retired a wealthy pirate, probably to Bermuda or Charleston, before fading into pirate history. He remains one of the rare pirates that retired on their booty.

WITHIN THE CICI AND HYATT BROWN COLLECTION, THERE EXISTS A REMARKABLE PAINTING OF AN UNKNOWN PIRATE. 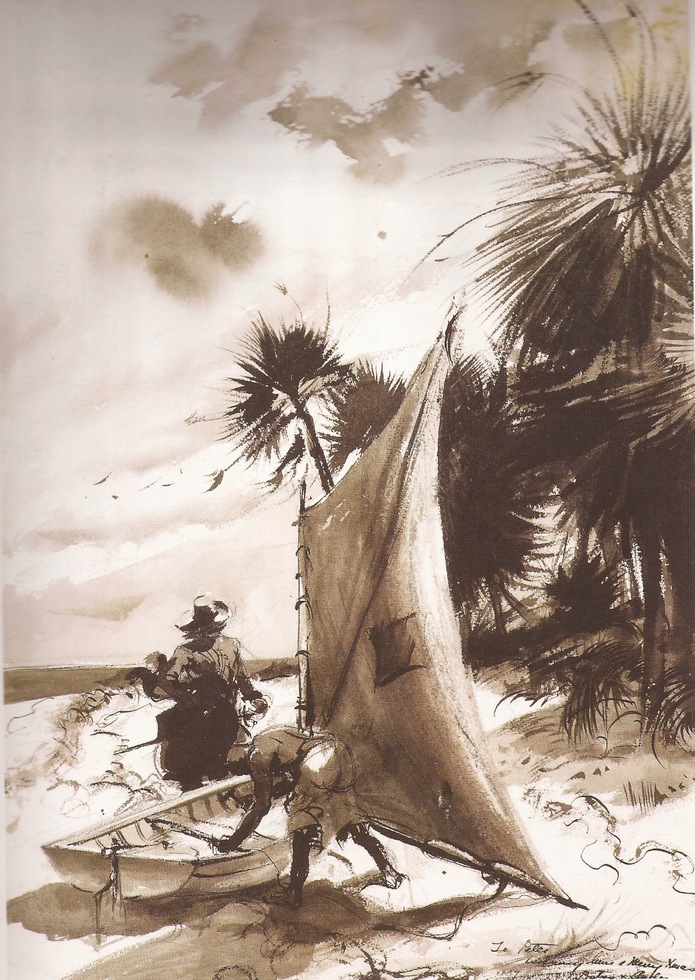 Andrew Wyeth, The Landing Party 1930, Ink on Paper, on
display at the Cici and Hyatt Brown Museum of Art

It is painted by Andrew Wyeth, the youngest son of the famous N.C. Wyeth, the great illustrator of Treasure Island. Andrew’s teacher was his famous father and he gained an impressive national reputation as a great artist apart from his father. In his painting, The Landing Party ca. 1930, rendered in ink on paper, Wyeth depicts two pirates dragging their skiff on a Florida sandy beach. The black and white image shows several typical Florida cabbage palms in the background and clouds gathering above them. The pirate who is walking away from his skiff appears to be dressed as if some type of captain with a long sword. The scene depicts a romantic version of pirates on a faraway beach, the type of image most of us have grown up with.

From the children’s story, Treasure Island to the Disney property, Pirates of the Caribbean, pirates have captured our imaginations. We romanticize the stories with images of treasure hidden on sandy beaches among the coconut trees, tall ships sailing on wide-open oceans, and freedom from the rigors of society. The romance of the pirates is strong but take the time to delve into the real history of pirates and you will find a fascinating history that is different from that of Hollywood. It is a history tied to international politics woven in an emerging global sea trade and is definitely part of Florida’s unique history.

Join MOAS Senior Curator of Education and History, Zach Zacharias, in the Root Family Auditorium for a look at the real-life of pirates. The fictional pirate stories you heard while growing up are based on real pirates, and Florida has its share! Florida has a long history of pirates who attacked St. Augustine or operated off its coast. Learn about the real history of the Caribbean pirates and how they became part of Florida's history.

Admission: Free for members, $7.00 for future members, or with paid museum admission.