By James "Zach" Zacharias, Senior Curator of Education and Curator of History 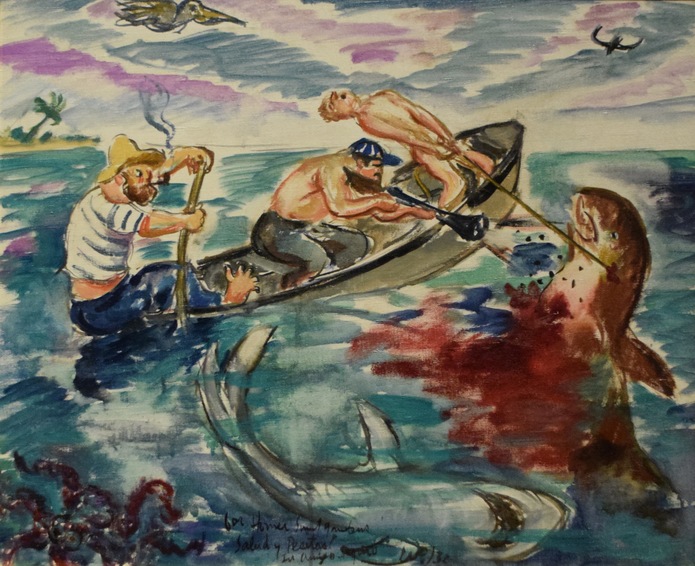 Since Florida became a territory in 1821, the state's reputation as a tourist paradise began to grow. At first, the territory was advertised to invalids seeking refuge from what was called the graveyard cough (tuberculosis). St. Augustine became a mecca for the ill, and in a way, the first tourist destination. As people from around the United States became familiar with the 27th state in the union, Florida began to be promoted for reasons other than just a warm place for invalids. An obvious selling point was as a winter playground marketed to wealthy northern tourists as a chance to escape the long, dark, cold season. Railroads built by entrepreneurs like Henry Flagler and Henry Plant allowed wealthy northern tourists an easy and safe way to travel to the nation's playground. Florida was marketed not just as a tourist destination, but as a paradise for the adventurer and the sportsman.

Florida has long enjoyed a reputation as one of the fishing locations in the world. Its reputation as a sportsman's paradise is unequaled. Even Ponce de Leon, one of Florida's first tourists, as he searched for wealth untold, commented on the abundant fish, pumas, alligators, and other animals inhabiting the land. Fishing has deep roots in Florida as demonstrated by the archaeological record. The first true Floridians, such as the Timucua and Tequesta Tribes, included fish as an important part of their staple diet. John James Audubon, while traveling through Florida in 1831, described how the immense amount of fish in the Halifax River impeded the progress of his boats. Audubon was a guest of the Bulow Plantation and was headed to Ponce Inlet, then known as Mosquito Inlet, to document and paint the Brown Pelican.

Once Florida became part of the United States, its reputation as a sportsman's paradise exploded, especially for fishing. Getting there was part of the experience. Even before the coming of the railroads, northerners flocked to remote parts of Florida. The pre-Civil War Brock House Hotel, located on the east side of Lake Monroe, was the first northern style hotel catering to the avid tourist fishermen. During the winter season, the hotel became so crowded with sportsmen that guests slept on the billiard tables. Two famous sportsmen found their way to the Brock House Hotel and fell in love with the area. Frederick deBary and Henry DeLand invested heavily in the Volusia County area as a result of their fishing adventures on the St. John's River. Their legacies live on in the two towns named after them.

The Lakeside Inn in Mount Dora also served as a famous resort for sportsmen who had a passion for bass fishing, It is the oldest continually operated hotel in Florida. The Inn was founded in 1882 and originally was called The Lake House. John Donnelly, a retired Confederate officer, and other investors founded the hotel. It became such a popular destination that it was expanded to 87 rooms. It was not easy to travel to Mount Dora before the railroads were built. It was a twelve-day journey by boat and required several different steamships.

The first fish to draw sportsman just for the sport of the catch was the mighty Tarpon. Men came from all over the world to fight the mightly jumping fish with rod and reel. Even before this, local fishermen hunted the Tarpon with hooks, hand liners, and spears. In 1885, a sensational catch by a rod and reel from Sanibel Island made international news and instantly designated southwest Florida as the epicenter of Tarpon fishing.

The new exhibit at the Cici and Hyatt Brown Museum of Art titled, Gone Fishin', is a wonderful collection of paintings documenting every aspect of sport fishing in Florida. Fishing boats, shrimpers, docks, fish camps, and even one very famous fishermen and writer are displayed in this unique collection of paintings. One of the world's most famous writers is also one of Florida's most famous fishermen. Ernest Hemingway is shown in the exhibit as the rugged avid sport fisherman. His love of fishing started as a young boy at this family's summer house on Lake Walloon, Michigan. Upon the advice of a friend, he traveled to Key West and instantly fell in love with the old city.

Hemingway loved to travel on deep sea fishing trips with his trusted friends that he referred to as "his mob" - artist Waldo Peirce, Charles Thompson, boyhood friend Bill Smith, and others. One trip to the Dry Tortugas, a famous spot for shark fishing 70 miles west of Key West, they became stranded for thirteen days at the old Civil War fort on Garden Key known as Fort Jefferson. One painting depicting the quest for sharks at the Dry Tortugas is by his friend Waldo Peirce. The watercolor titled, Waldo Peirce with Ernest Hemingway Shark Fishing in the Tortugas, 1932 shows Hemingway in the back of a small boat manning the oars on a rough sea. His companions capture the shark not with a rod and reel but with a comical-looking blunderbuss shotgun. The whole scene is fairly cartoonish with lots of colors and high drama. Loosely painted, the mid-ground is full of action with Hemingway and part of his "mob" struggling with the mighty beast as blood begins to fill the sea surrounding their craft. 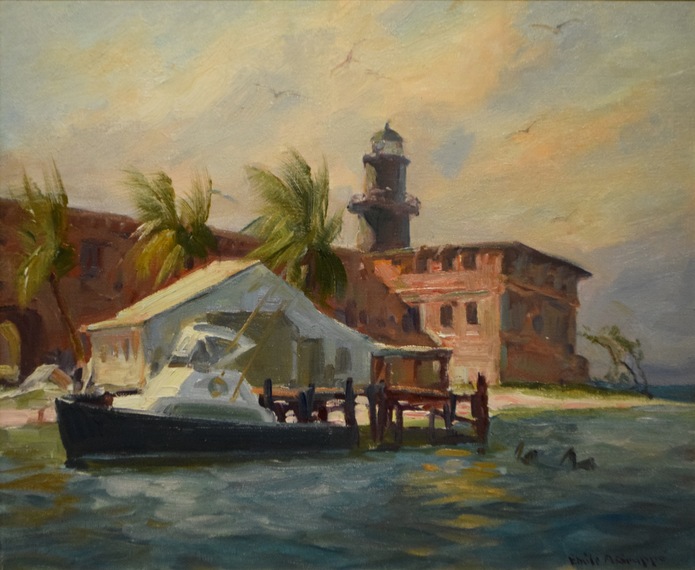 A breathtaking impressionistic painting by Emile Albert Gruppe titled, Ft. Jefferson, Dry Tortugas ca. 1950 is an oil on canvas. It shows a cabin cruiser parked at the dock of the old Fort Jefferson with the lighthouse in the background. Gruppe was known for his impressionistic landscapes. This painting shows just a section of the fort on a windswept day. The artist used colors typical of a Florida tropical day with bright blues, whites, greens, and red for the bricks that make up the colossal fort.

When constructed in the mid-1850s, Fort Jefferson was the largest brick structure in the Western Hemisphere. It sits on the thirteen-acre Garden Key, one of the seven islands that makes up the Dry Tortugas. It was designed to show American power and keep Europeans out of our sphere of influence. The colossal fort was never finished. Twenty-one million bricks were used in its construction. Fort Jefferson was designed to mount over 420 large cannons, although only 120 were ever mounted in the fort. It remained in Union hands for the entire Civil War and was used as a military prison. After the war, its most famous prisoner was Dr. Samuel Mudd, co-conspirator of Lincoln's assassination. Created as a National Monument in 1935, it is the second least visited national park due to its remoteness. 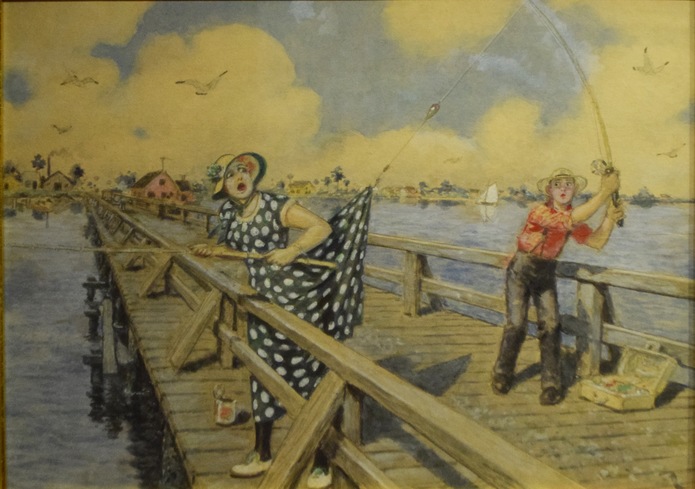 He Couldn't Have Done It If He Tried, ca. 1950, James Calvert Smith

James Calvert Smith was born in the small town of Micanopy, Florida in 1879. He was a cartoonist for the Florida Times-Union and a painter who was friends with Norman Rockwell. Smith also worked for Harper's and Post Magazines, and his style was influenced by Rockwell while living in New York City. Perfecting his landscapes while living in Connecticut, he began receiving commissions for representational paintings. A large group of paintings depicting the Daytona Beach area is featured in the Cici and Hyatt Brown Collection. The watercolor on paper, He Couldn't Have Done It If He Tried, ca. 1950, depicts a humorous scene on a fishing dock in Daytona Beach where a fisherman has snagged the back of the dress of a young woman fishing on the dock behind him. As he attempts to cast his line behind him and launch his rig into the ocean, the woman is caught off guard with a horrified look on her face as the hook lifts her dress into the air. Behind the scene is a typical pleasant Florida day with seagulls above, sailboats, and a billowing sky behind the foreground action. James Calvert Smith died in Holly Hill, Florida in 1962. 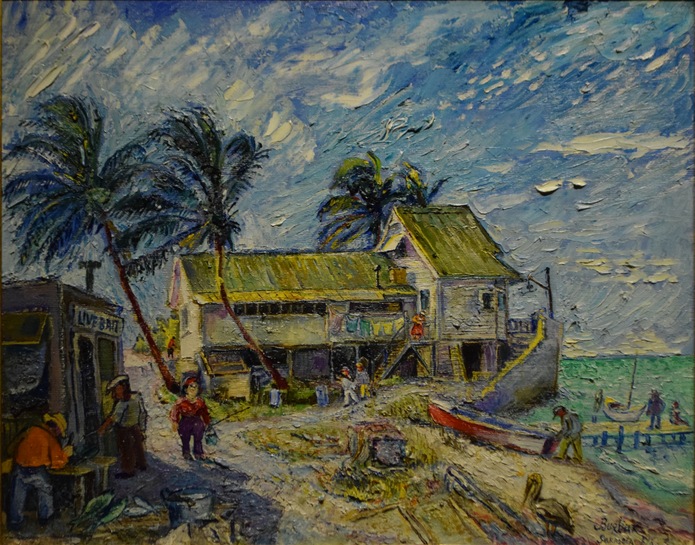 The style of David Davidovich Cherson Burliuk is unique and impressive with a heavy thick painting style coupled with unblended strokes and the use of a palette knife. Using unusual color choices, he creates a bright style with less detail and his paintings reflect a folk art style. Burliuk was born in Russia in 1882 and was an avid modernist painter while working in Europe. Coming to America in 1922, he became a snowbird visiting Florida in the 1940s and living in the Sarasota area. In the painting, Fishing Station, Sarasota, Fla. ca. 1960, he shows a crusty coastal fish camp that looks disheveled. A clothesline hangs in the center of the canvas while an old metal roof on the main building and a bait shack give the whole scene a rustic look. The painting shows a bait shack on the left foreground and squat looking people scurry about preparing for a day of fishing. There are many paintings belonging to Burliuk in the exhibit that depicts a folksy style of fishing life on the west coast.

The Gone Fishin' exhibit at the Cici and Hyatt Brown Museum of Art showcases a slice of Florida as a sportsman's paradise. Tourists have flocked by the tens of millions over the years to fish in the endless mangrove swamps, saltwater marshes, rivers, lakes, and coastal fishing spots. Florida has a long history of fishing from prehistoric times to today. In fact, a record number of saltwater fishing licenses were issued in 2018. With an ever-growing population, conservation work will need to be done in the state to keep its beauty and natural resources for future generations.