The Evolution of Santa Claus

Santa Claus is a legendary figure who is the traditional patron of Christmas in the United States and other countries. His popular image is based on traditions associated with Saint Nicholas, a 4th-century Christian saint, while Father Christmas fills the role in many European countries. The image of Santa Claus has changed throughout the years. If someone was asked to describe Santa they probably would not describe him as a saint or stern man. When people think of Santa they tend to think about a jolly man with a white beard who brings joy to children. So how did we go from a saint to an elf-like figure who lives in the North Pole?

The name Santa Claus has its roots in the Dutch name for St. Nicholas. The historic 4th-century Greek saint had a reputation for secret gift-giving, such as putting coins in shoes left out for him. St. Nicholas is the patron of children and is associated with giving gifts to children. The feast of St. Nicholas was celebrated on December 6th and was very popular throughout the middle ages. After the reformation in the 16th-century, the celebration had died out in most Protestant countries, except for Holland where the celebration of Sinterklaas still continued. 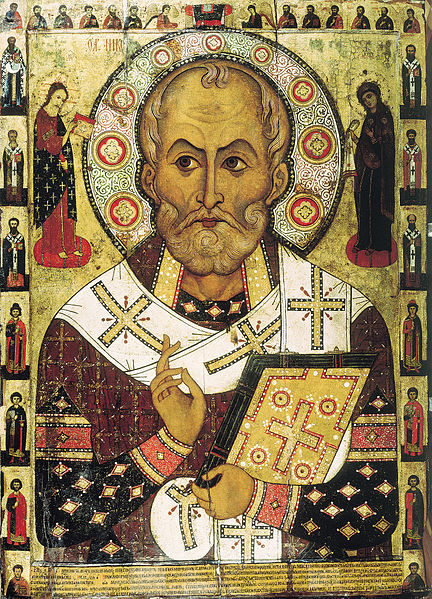 St. Nicholas "Lipensky" as he appears on a Russian icon dated to 1294
from Lipnya Church of St. Nicholas in Novgorod

In America, during the early 1800s, the east coast was full of Dutch settlers who had brought over their Sinterklaas traditions which would eventually give way to the Americanized Santa Claus. Following the Revolutionary War, the already heavily Dutch-influenced New York City (formerly New Amsterdam) saw a new interest in Dutch customs, and with them, St. Nicholas. In 1804, John Pintard, an influential patriot, founded the New York Historical Society and promoted St. Nicholas to a patron saint of both the society and the city. Pintard commissioned artist Alexander Anderson to draw an image of the saint that could be handed out to guests at the first St. Nicholas anniversary dinner, hosted by the historical society. In Anderson's portrayal, he was still shown as a religious figure who left gifts in fireside stockings and was associated with rewarding the goodness of children. Unfortunately, “St. Nicholas Day” did not take off the way Pintard wanted, but Anderson’s image of Santa Claus definitely did. 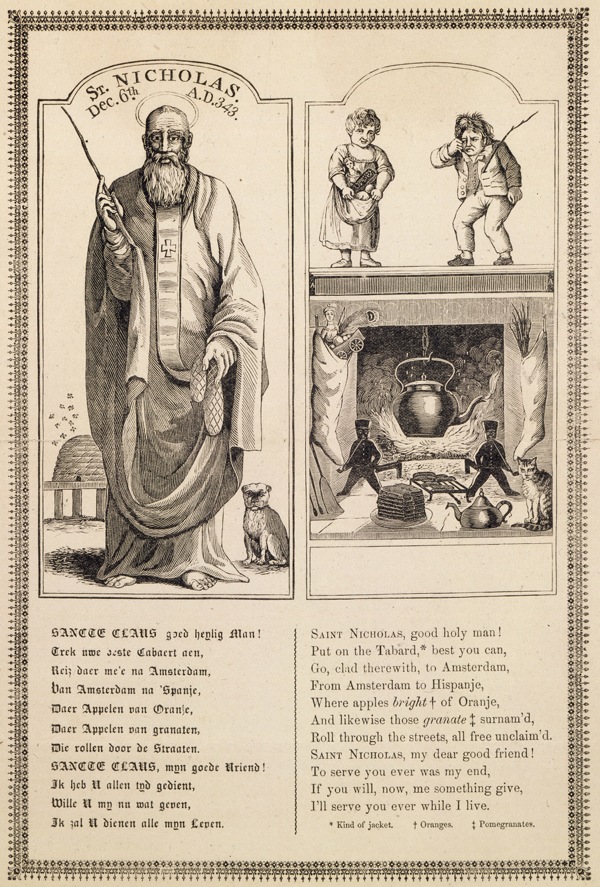 About a year before Pintard’s “St. Nicholas Day” celebration, author Washington Irving had written about Santa in his satirical fiction Knickerbocker’s History of New York, which consisted of seven books. In chapter two of his seventh book, Irving writes about the end of year celebrations. Irving writes, “Never were stockings better filled on the eve of blessed St. Nicholas.” He then goes on to write, “…every house was a temple of the jolly god.” This is the first time that we see St. Nicholas being referred to as jolly figure. Then in 1822, Clement Moore wrote a poem entitled “A Visit from St. Nicholas” which would eventually be known as “The Night Before Christmas.” Moore was influenced by both Irving’s description and Pintard’s New Amsterdam tradition when he created his jolly, sleigh-riding Santa.

As time went on, more and more was added to the image of Santa. In 1862, Civil War cartoonist Thomas Nast drew Santa Claus for Harper’s Weekly – the most widely read journal in the United States throughout the Civil War. While Nast is more popularly known for his creation of the elephant and donkey symbols for the Democratic and Republican parties, his image of Santa has greatly influenced our modern version of Santa. Nast depicts Santa as small and elf-like who supported the Union. This is the first time that we see Santa Claus as a fat, bearded elf. Nast continued to draw Santa for 30 years and along the way changed the color of his coat from tan to the now traditional red. 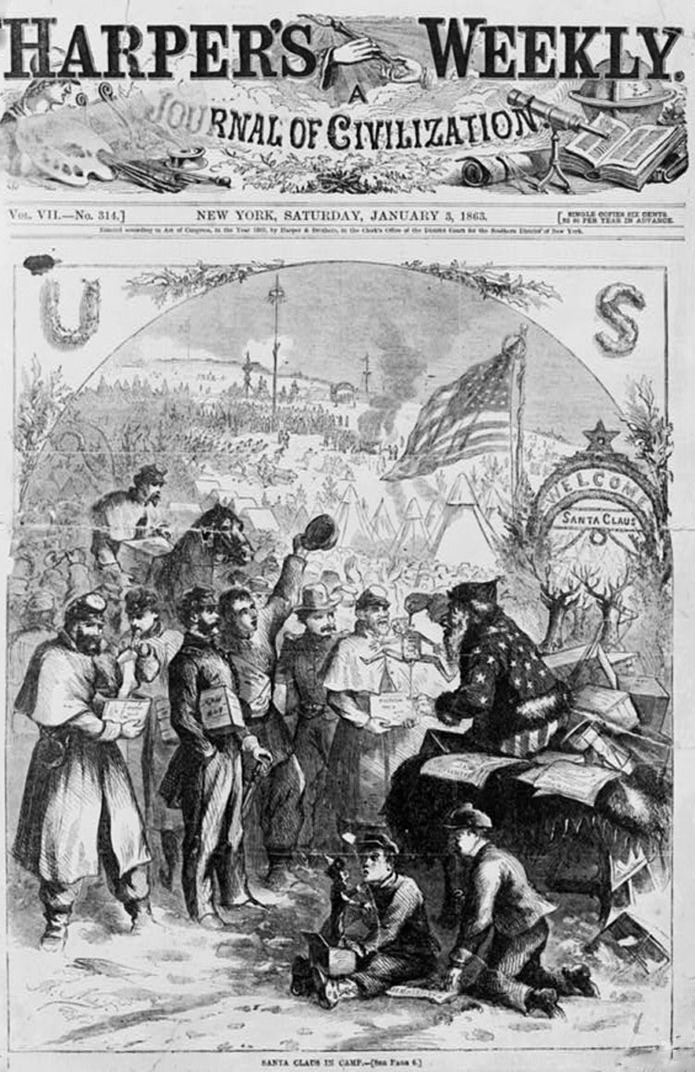 Thomas Nast's illustration, "A Christmas Furlough" for the front page of a 1863 issue of Harper's Weekly

In later drawings, Nast relocated Santa Claus to the North Pole where he included a workshop for building toys and a large book that was filled with the names of children who had been naughty or nice. 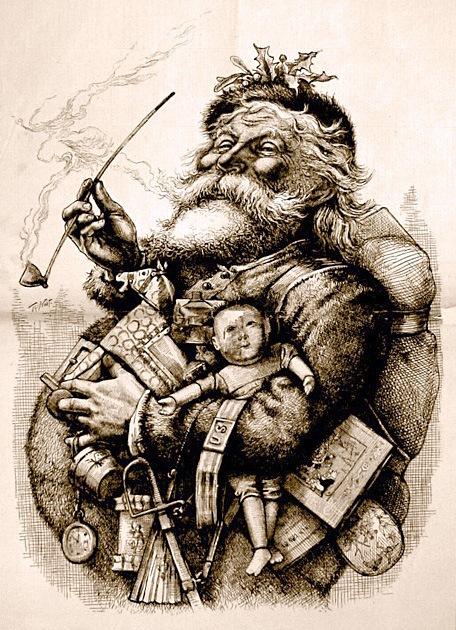 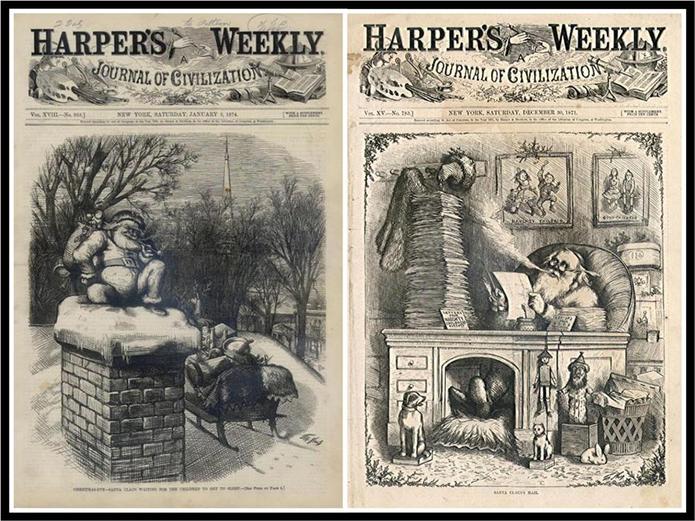 Sundblom was inspired by Clement Moore’s 1822 poem “A Visit from St. Nicholas” and used it to create a newer version of Santa. Moore’s description of the man as “chubby and plump, a right jolly old elf” led to an image of Santa that was warm, friendly, and human. For the next 35 years, Sundblom painted portraits of Santa that helped to create the modern image of Santa Claus. 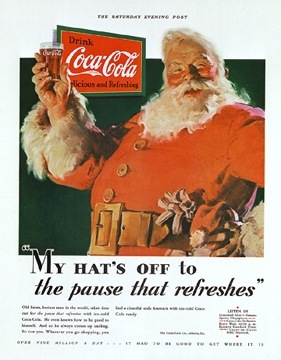 The Museum of Arts & Sciences has continued the Coca-Cola Santa tradition with our vast collection. With every conceivable item related to the bottling, advertising, and consumption preserved in their collection, the Root Family has created one of the country’s most historically important anthologies of the American soft drink that is loved worldwide. Next time you plan your visit, be sure to check out our Coca-Cola Christmas collection! 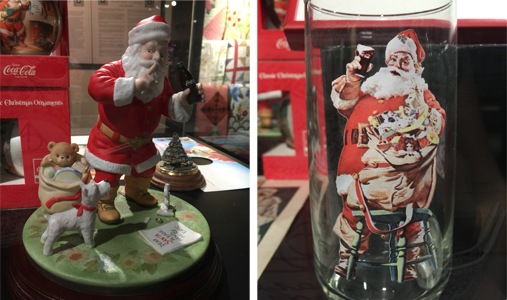