The World of Frida at MOAS

The World of Frida Exhibition opened at the Bedford Gallery in Walnut Creek, California, during the summer of 2018. The pieces shown were the result of a juried call for art online, with artists responding from within the community and others sending their work from as far away as Germany. The original lineup of approximately 150 works of art inspired by Frida Kahlo were accompanied by Nickolas Muray’s photos of the artist and an array of surrounding attractions, creating festival sized crowds in Walnut Creek. Festivities aside, the Kahlo-inspired pieces are impressive enough to draw a crowd of their own.

In reviewing the pieces in the exhibition, a few key ones caught my eye. Within works that were supposed to be reminiscent of Kahlo’s ever-recognizable style, I selected some styled off of her self-portraits, some that were heavily inspired by Kahlo’s status as an activist and art icon, and some that just surprised me. All the pieces in the collection contain iconic art elements of Frida: monkeys, pets, butterflies, flower crowns, anatomical hearts, jewelry, Mexican cultural depictions, textiles, deer, and splashes of bright colors. Also within the pieces are developed forms of Frida Kahlo, not from her lifetime or work, but from her still-developing posthumous status as an icon.

1. Angel Wynn, an artist from Santa Fe, New Mexico, was strongly influenced by an interest in history when she created her glowing work, “Frida’s Metamorphosis.” She attributes her achievement in creating bright and capturing collages to an ancient Egyptian technique that she has modified for her own use. On her website, Wynn explains that she will typically paint layers of translucent melted encaustic wax over the surface to give my artwork luminous textured qualities.” This particular piece struck me because unlike other works that rely on specific lighting to bring out their glow, the artist crafted this one with materials and techniques specifically to make it appear constantly illuminated. The subject matter discussed within the work is Frida’s journey through her life: from being a young artist, to a bride in a tumultuous relationship, to her later years of strife and expression through art. Since Frida died far before her paintings hit their peak popularity, I wonder if she ever reached the end of her “metamorphosis.” 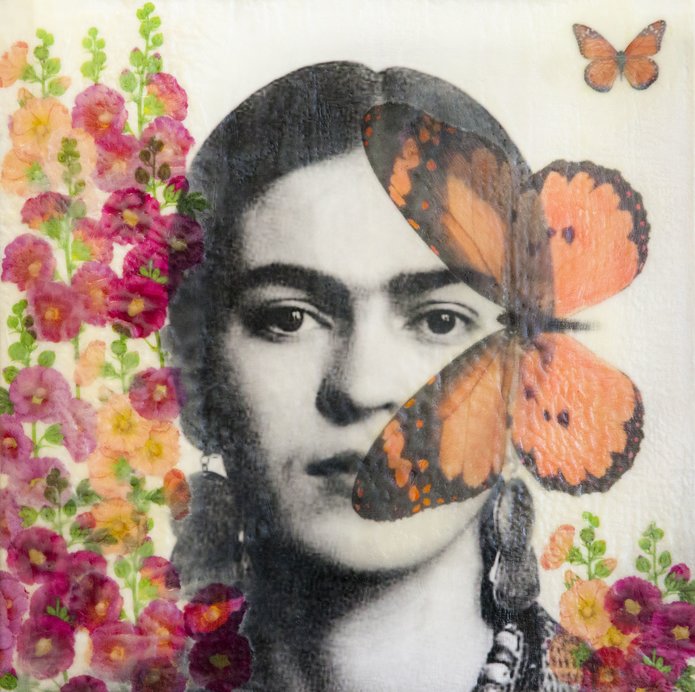 2. Another standout was from artist Jamie Burnside, “Defiant Deer.” Burnside captured the mystical element of Kahlo’s work as well as her fascination with self portraits reflecting life experience. This painting seems like a reflection of the reality of Frida’s own death, along with some symbols of the longevity that her work would achieve after her passing, with the butterfly and full moon, both symbols of metamorphosis, on the flipside of her countenance. Interestingly, Burnside painted Frida as more outwardly feminine than she ever painted herself, evidenced by the lack of her distinctive slight mustache. In their artist’s statement, Burnside mentioned that the work is supposed to turn the pain in Frida’s paintings on its head, creating the image of Frida as a warrior. 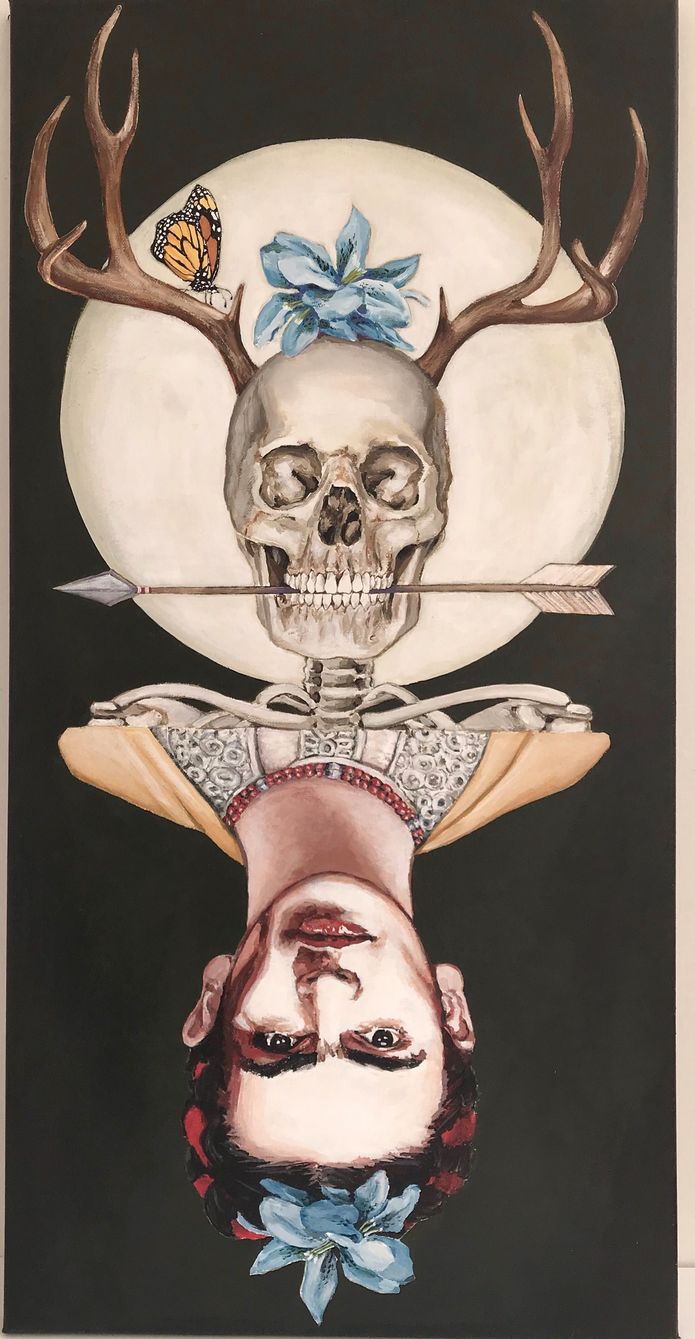 3. In Karen Provost’s “My Frida,” Kahlo is captured in another artist’s style the truest to how she depicted herself. Most of her trademark symbols are present in the piece, the eccentric jewelry, the references to Mexico, the facial features, and the way the textile she wears wraps around her is all very authentic Frida. The way that symbols pass over her face is reminiscent of Frida Kahlo’s “Self-Portrait as a Tehuana.” What Provost does that makes “My Frida” her Frida is interpret the famous artist’s character through the medium of a mixed media collage. Where some of the other artists in the exhibition are imitating Kahlo or reinventing her image, Provost appears to capture her. Interestingly, the image of Frida chosen was from the latter half of her life. 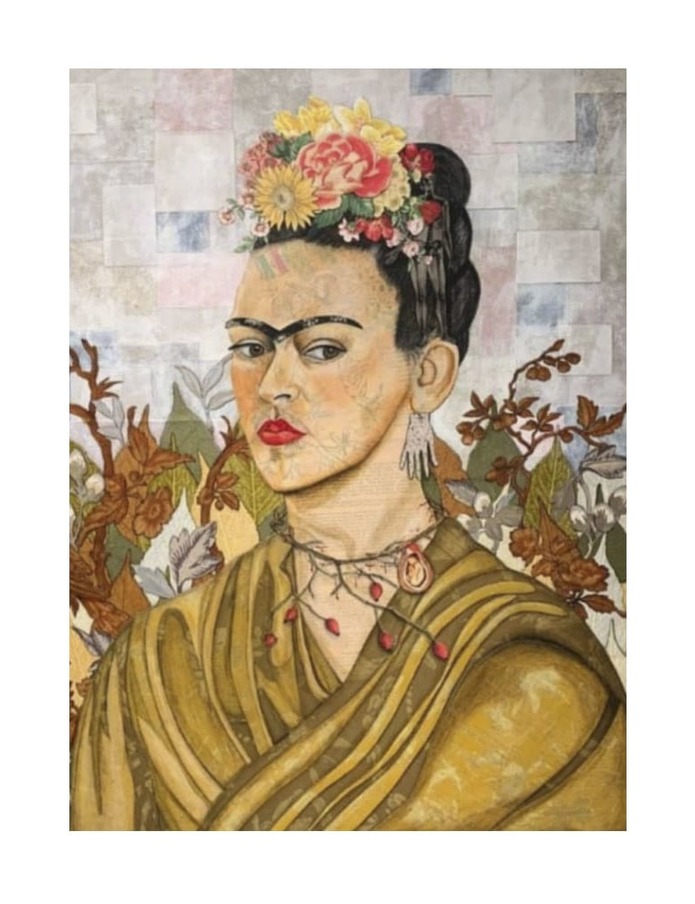 4. “Larger than Life (Frida Kahlo)” by Kersten Bruchhäuser is a large tapestry intended to hang with the exhibit. One of my favorite things about the whole exhibition is these varied artists’ use of their medium. In the case of Bruchhäuser, that medium is textile. This German artist pays homage to the life-like fabrics so often painted in Kahlo’s work by making her image into this embroidered multi fabric. The title plays on two levels, one being the size of the piece and the other being the enormousness of Kahlo’s impact as an icon and a major figure in the art world many years after her death. Bruchhäuser used textiles in making this to show the nature of change with such an alterable medium. 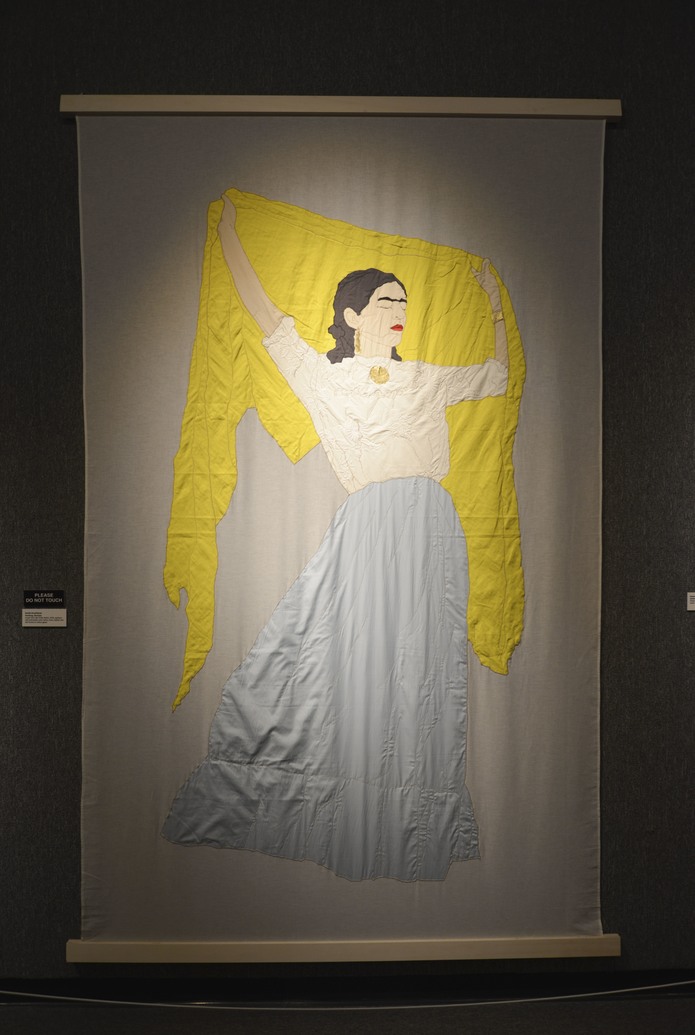 5. Another fascinating work of art is Mona Cliff’s “Dear Heart,” done with czech seed beads on felt. This small piece glitters in the gallery lights, and if the visitor looks close enough, they can see every individual sewn bead. The subject matter is an anatomical heart with antlers growing out of it, pierced by four arrows, all above a red flower. For me, the most satisfying part of looking at this piece is following the path of the blue beads with your eyes and wondering how many hours in total it took to sew every tiny bead. Cliff’s use of beadwork recognizes her native culture, just as Frida’s paintings nodded to Mexican culture. 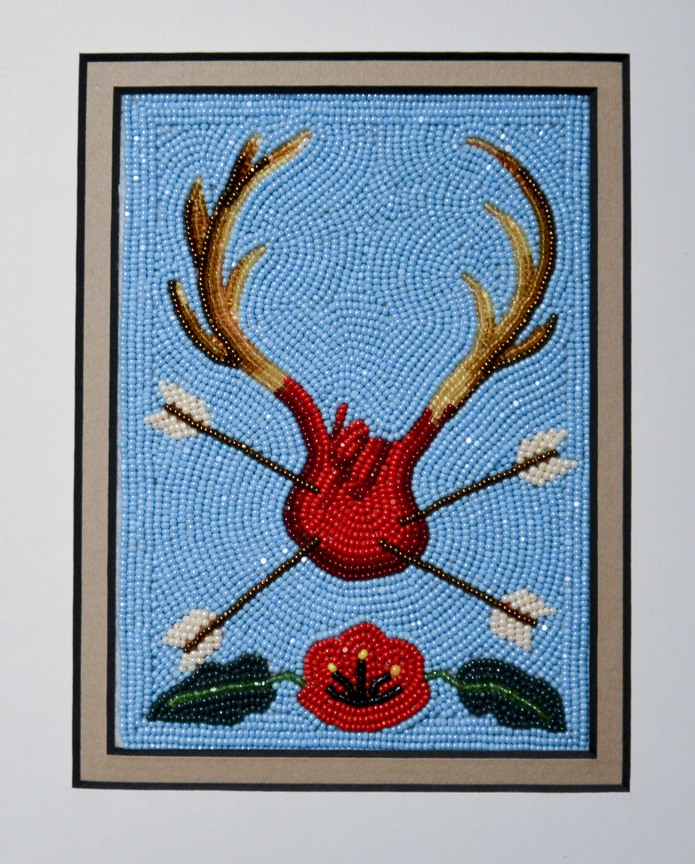 6. One of the most surprising pieces in the collection was the necklace by Debra Grall titled, “Pies, para que los quiero si tengo alas para volar.” The title loosely translates to: “Feet, why do I want them if I have wings to fly?” which is a famous quote attributed to Frida Kahlo. The necklace reminds me of the eccentric pieces of jewelry that Kahlo painted herself wearing in her self-portraits. The funny thing is that through Grall’s use of porcelain, beads, suede, and metal, she has made an interpretation of Frida’s life into an eccentric necklace, probably one that the artist would have worn. 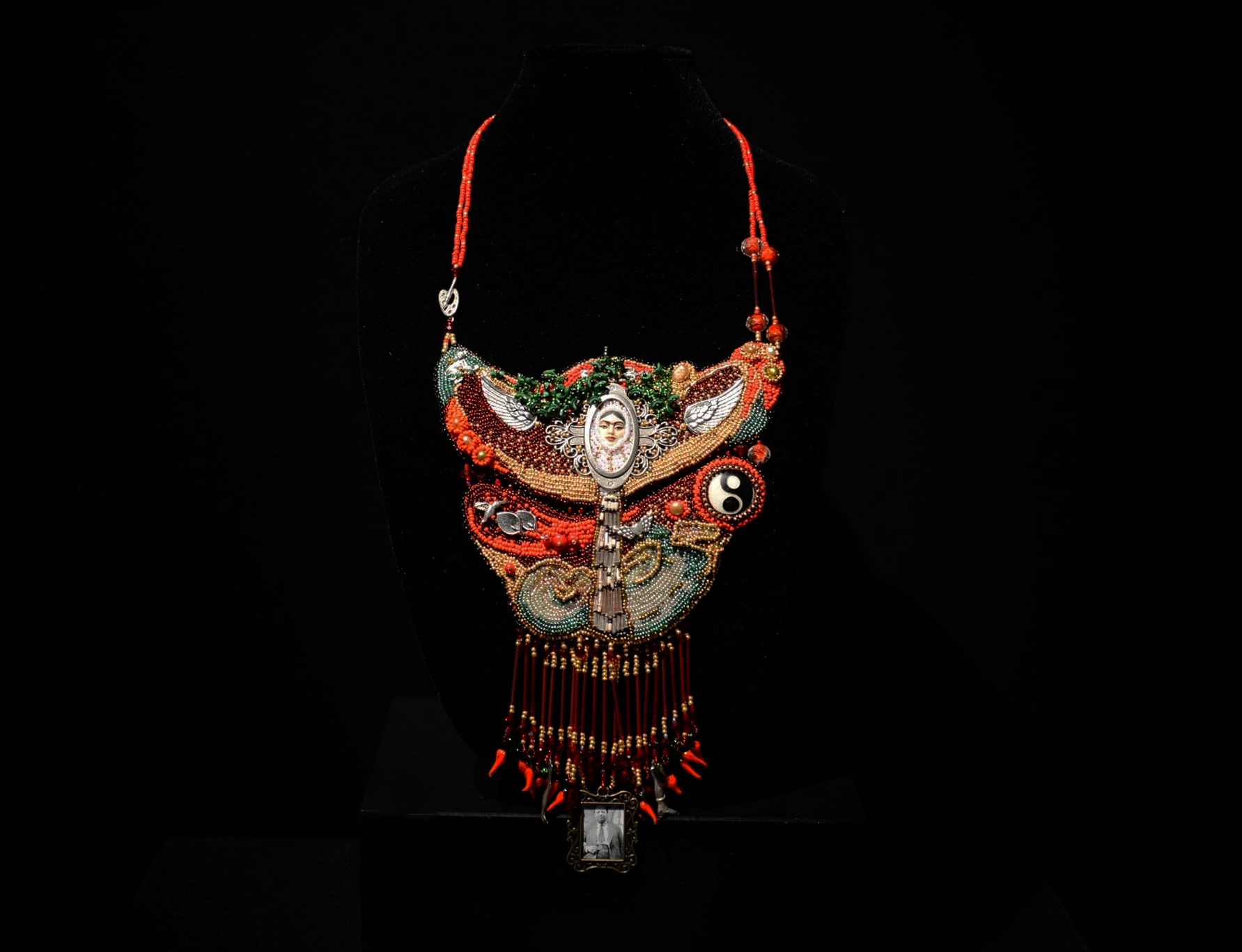 7. A nearly biographical painting close to Frida’s style sits at the opening of the gallery, Anita Beshirs’ “Her Favorite Dogs,” from 2015. This painting uses background, color, and style reminiscent of Frida’s. The subject matter is Frida as a skeleton, holding her husband Diego Rivera on a leash that is actually one of her arteries, while the other artery is connected to her palette and brush. Rivera’s head ending up on the body of a dog might be the Beshirs’ form of punishment for his multiple affairs, including with Frida’s own younger sister, Cristina. It might also be interpreted that even after death, she had a hold on him, that his reputation would be eclipsed by her post-passing fame and that he would be ever tied to her story. The piece is up to interpretation, of which there could be many. 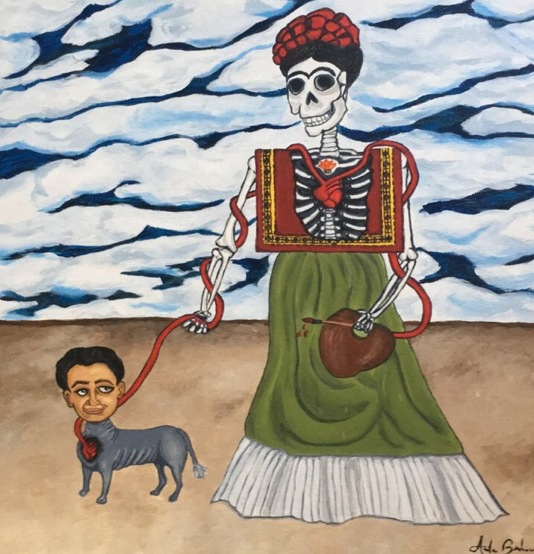 8. An interesting addition to the collection is Netsanet Tesfay’s “Resist: Frida in pussy hat.” This 2018 work of American art interestingly repurposes the image of a Mexican icon as a figure of feminism against patriarchy with a contemporary symbol of American female resistance. A lot of this imagery being applied to the twentieth century Mexican artist has to do with the popularization of her art during the 1970s, the period of second wave feminism in America. Due to her openness about being bisexual, her tendency to dress only how she wanted, her untraditional marriage, her confrontation of women’s issues through her painting, and her solo fame as a female artist, Kahlo was given status as an early icon of feminism. While Kahlo might have agreed with the tenets of developing feminism at the time, her main cause was Communism. Putting Frida in one of the pink hats worn by many women in support of women’s rights is an interesting choice, because it repurposes Kahlo into a recognizable figurehead of a cause she was not a major part of. Perhaps this makes sense, since much of Kahlo’s art only skyrocketed in popularity posthumously, that her beliefs through her paintings would be adopted by second wave feminism. Elizabeth Shackleford, a writer for the New York Times in the 1990s, strongly disagreed with the use of Kahlo as a figurehead for feminism, citing that the paintings were a private expression of Kahlo’s thoughts, that her marriage was unhappy (not liberating), and that people are just trying to capitalize on the details of her life. However, in the history of American Feminism, as explained in Annelise Orleck’s “Rethinking American Women’s Activism,” the communism party was tied to the feminist movement in the 40s and 50s. (Orleck, 58-59) The CP offered more opportunity for immigrant women, women in general, homosexual people, people of different races, and the working class than the American Government did in this era. This was largely due to a propagandized obsession with the nuclear family, and a woman’s place in it, as a defense against Communism--a strategy that alienated many and drove them to the CP before the Red Scare. Frida visited the United States during the years 1931-1933, a time where there was a widespread movement among mothers and housewives to institute federally regulated and affordable prices on staple grocery items, using what were scorned by contemporary politicians as communist tactics to achieve their consumer goals. (Orleck, 47) Frida would have seen women’s activists, early feminists and communists, trying to survive during the Great Depression in America. If she was an icon to anyone at the time, it was because she was painting women outside of their stereotypical gender roles, which were so heavily enforced in the United States, that when these works were seen, they would have been their own activist protest. How activism is thought of has changed since the 1990s, when Elizabeth Shackleford wrote her article; feminist activism can be anything that pushes forward or brings inspiration to the cause. In that way, through her art, Frida Kahlo was a feminist activist, as she is depicted in Tesfay’s thought-provoking work. 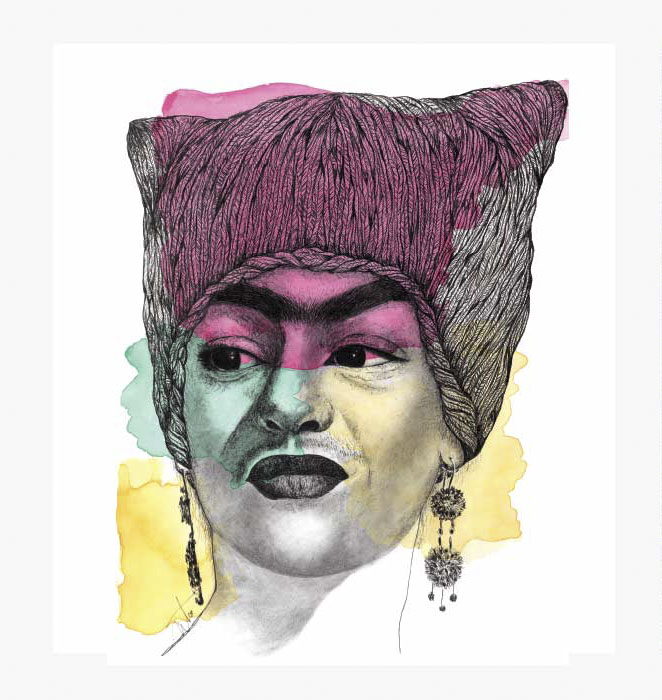 9. The last work that really caught my eye was by Juan Solis, a painting titled “Corazon de Frida.” This piece reminds me of a freed version of Frida Kahlo, as if she snapped out of her physical and emotional restraints in her self portrait “The Broken Column.” This wild, vibrant, intimidating version of Frida is probably most true to the personality cultivated by her iconic status, but perhaps not to her in life. It probably more closely matches her persona in the Disney Pixar film, Coco. Even in her most surreal art she almost never used color this bright, with the exceptions of her fruit bowl paintings, but somehow most of the artists in this exhibition associate bright colors with her work. The element of the heart is also here, except where it was used in Kahlo’s “Memory, the Heart” to convey heartbreak, Solis uses her exposed heart within her ribcage to show her strength and vivacity. Her exposed skeletal torso and open arms signify an openness of character. Where in her own work her expression would have been stoic or tearful, Solis imagines her clear-eyed and steady. An intriguing detail that can’t be seen in pictures of the piece online is the shadow of a fetus over the outline of her torso. Some biographical sources claim that Kahlo suffered a misscarraige in 1934, which could be what Solis was alluding to. 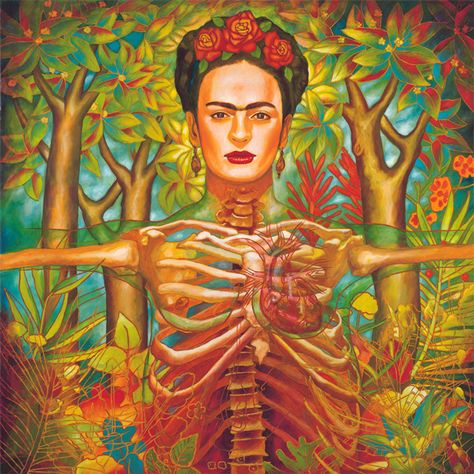 All of the works in this exhibition are great responses to Kahlo’s own portfolio. They build off the themes in her work to make pieces that not only remind viewers of her paintings, but celebrate her life. This feat is all the more impressive considering how far and wide these artists are spread culturally, globally, and in their use of various media.

Enjoy the#MuseumFromHome in our walk-through tour of the Bedford Gallery's Exhibit: The World of Frida.

The World of Frida

For more information about the Art and Artists:
"The World of Frida" Exhibit Guide: http://bit.ly/TheWorldofFrida