The History of Halloween

Halloween has its origins in the Celtic festival of Samhain (pronounced SOW-in). It was a celebration of the Celtic new year which falls on November 1 of the Gregorian calendar. For the Celts, this was the date when the transition from the harvest season to winter happened. The festival would begin the night before on what is now October 31. During this period the Celts believed the veil between the world of the living and the world of the dead became weaker allowing spirits to cross over. During the festival, the spirits of those who had died were believed to return to visit their homes, and those who had died during the year were believed to cross over to the world of the dead. Large bonfires would be lit on hilltops for relighting hearth fires for the winter and to frighten away evil spirits. Some people would wear masks and other disguises to avoid being recognized by malevolent spirits. The festival was also thought to be a good time for divination on matters such as marriage, health, and death. When the Romans conquered the Celts in the 1st century, they added their own festivals of Feralia, commemorating the passing of the dead, and of Pomona, the goddess of the harvest. 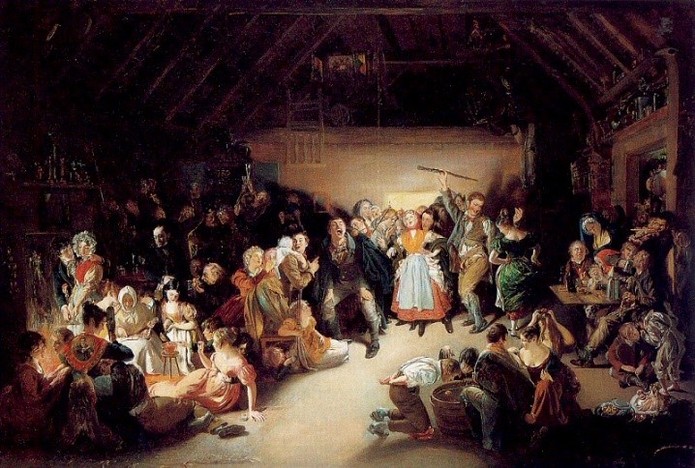 In the 7th century Pope Boniface IV established All Saints’ Day on May 13 and in the following century, it was moved to November 1. It is believed this was an effort to supplant the Samhain festival. The evening before All Saints’ Day became a holy, or hallowed, eve and was eventually shortened to Halloween. Eventually, the holidays had merged with elements from the Celtic festival remaining prominent fixtures of the holiday. The Reformation in the 16th century essentially ended the religious aspect of the holiday among Protestants. Though they continued to celebrate Halloween as a secular holiday. 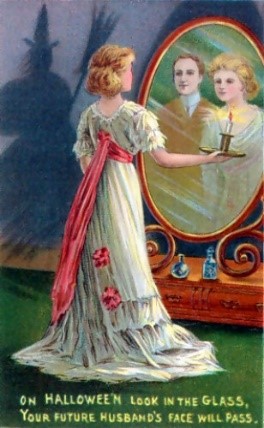 Along with other holidays, the celebration of Halloween was largely forbidden among the early American Puritans who believed them to be far too pagan. Other colonists did have harvest festivals around the same time. By the 1800s however, festivals that marked the harvest began to incorporate more elements of Halloween. These included the divination. One popular method for divination involved apples. Bobbing for apples, a game that existed since the colonial era in America, was used for divination. According to the stories, the first person to pluck an apple from the water-filled bucket without using his or her hands would be the first to marry. There were other apple-based forms of divination popular at the time. One said that if a girl peeled an apple into a long ribbon and threw it when it landed it would be in the shape of her future husband’s first initial. Other popular non-apple based divination included standing in front of a mirror at midnight on Halloween. It was said that a person’s future spouse’s face would appear over their shoulder. Popular divination at the time followed a clear theme. 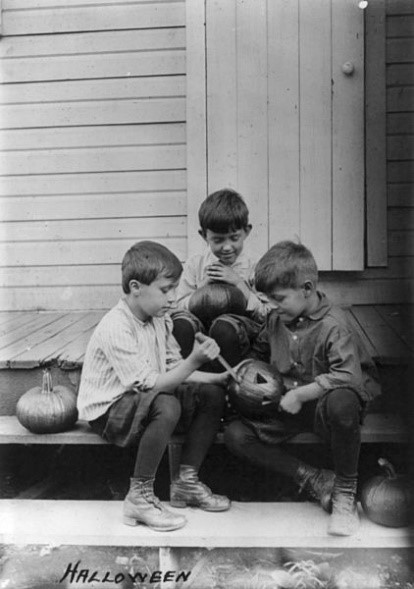 When large numbers of immigrants, including the Irish, went to the United States beginning in the mid-19th century, they brought their Halloween customs with them. One custom brought by the Irish immigrants was the jack-o’-lantern, a hollowed-out pumpkin, originally a turnip, with a carved face and a candle inside. The tradition and name came from an Irish myth about a man nicknamed “Stingy Jack.” In the story, Stingy Jack invited the Devil to have a drink with him. Jack, however, did not want to pay for his drink, so he convinced the Devil to turn himself into a coin that Jack could buy their drinks with. Once the Devil transformed, Jack decided to keep the money and put it into his pocket next to a silver cross, so the Devil could not change back. Eventually, he freed the Devil, under the condition that he would not bother him for one year and that when Jack died the Devil would not claim his soul. Once the year ended, Jack tricked the Devil again by convincing him to climb a tree to pick a piece of fruit. When he was up in the tree, Jack carved a cross into the tree so that the Devil could not come down until he promised Jack that he would not bother him for ten years. Shortly after this arrangement, Jack died. Unfortunately for Jack, he was too immoral to get into heaven and the Devil, keeping his word not to claim his soul, would not allow Jack into hell. He sent Jack off into the night with only a burning coal to light his way. Jack put the coal into a carved-out turnip and has been roaming the Earth with ever since. The Irish began to refer to this ghostly figure as “Jack of the Lantern,” and then, simply “Jack O’Lantern.” Jack-o’-lanterns are almost exclusively made from pumpkins these days and remain one of the most recognizable symbols of the holiday. While Stingy Jack’s story may have faded in popularity, the lanterns themselves never did.  They are just as popular today as they were in 1917 in the picture shown above. 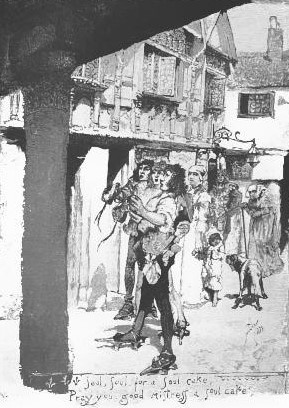 As a secular holiday, Halloween has come to be associated with a number of activities. One of the most famous of which is dressing up in costumes. People wear masks and costumes for parties and for trick-or-treating. Costumes at parties and or festivals have been around since Samhain itself. Trick-or-treating is thought to have come from the tradition of "souling" in Britain and Ireland, when people, adults, and children alike, would knock on doors on Hallowmas (November 1), asking for food in exchange for prayers for the dead. They would sing "Soul, soul, for a soul-cake: Pray you, good mistress, a soul-cake!" Soul-cakes are small round cakes made with allspice, nutmeg, cinnamon, and ginger with raisins or currants on top. The maker would also put a sign of the cross onto the top of the cake. There were other versions of the song which also requested alcohol. Trick-or-treating as we know it today is a merging of these traditions and is first mentioned by name in the late 1920s. Trick-or-treaters go from house to house with the threat that they will pull a trick if they do not receive a treat. Pranks in some form or another have been another popular Halloween activity for centuries. During these early days, it was common to give out homemade cookies and pieces of cake, fruit, nuts, coins, and small penny toys. It’s popularity really took off after WWII and with the rise of the middle class. This is the same time that candy manufacturers homed in on the market. By the 1970s people were almost exclusively passing out prepackaged treats. Today the number of trick-or-treaters has declined in many neighborhoods with many parents opting to take their children to community events instead. In a way, this almost moving back to the community festival aspect of the holiday.