Greetings from the Great American Eclipse

When the dark umbral shadow of the moon raced over the United Stations on August 21st, 2017, it was a celestial spectacle that millions of people flocked to witness. Dubbed the Great American Eclipse, this was a rare occurrence when the moon completely covered the sun and could be seen along a narrow 65-mile wide path that stretched from Oregon to South Carolina. States outside the path of totality, including Florida, experienced a partial eclipse that could safely be observed through eclipse glasses, solar scopes, or simple pinhole projectors. To cover the total solar eclipse for MOAS, Seth Mayo, Curator of Astronomy, traveled to Greenville, South Carolina, and Jason Schreiner, MOAS Planetarium Educator, trekked to the Grand Tetons in Jackson Hole, Wyoming. Although they were separated by more than 1,600 miles, Jason and Seth were connected by a common goal: to personally witness a total solar eclipse for the first time in their lives. The images that follow help to tell the story on what they both witnessed, learned, and most importantly, felt, as the eclipse occurred overhead. 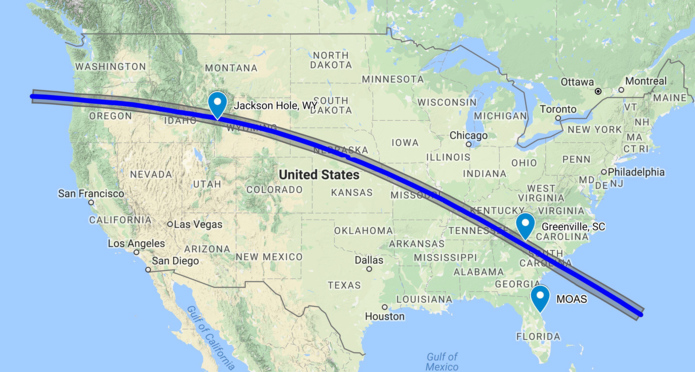 This map illustrates the path of totality where the 65-mile wide shadow of the Moon cut through the heart of the U.S. on August 21st. The blue markers indicate where Jason Schreiner (Jackson Hole, WY) and Seth Mayo (Greenville, SC) observed the total solar eclipse that day. 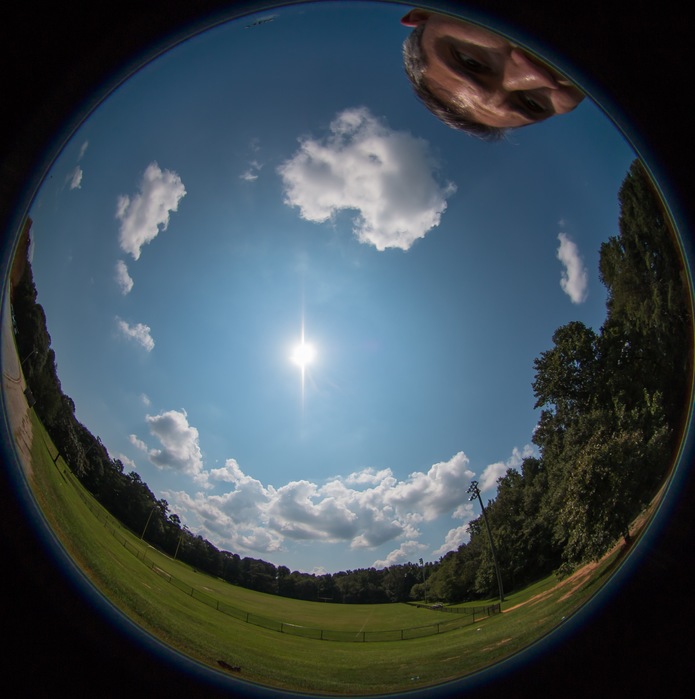 Seth Mayo: My original game plan was to travel to Charleston, SC to witness the eclipse. However, astronomer's luck was in full effect with poor weather forecasted. I made a last minute change and traveled to clearer skies in Greenville, SC, and captured this wide-angle fish-eye shot (formatted for hte planetarium dome) of an open park that I discovered to be empty with my own face caught in the moment. Even though this was more than two hours before totality, my intention for this shot was to provide a view of the color temperature of the sun's light on the ground before the dramatic environmental changes occured. 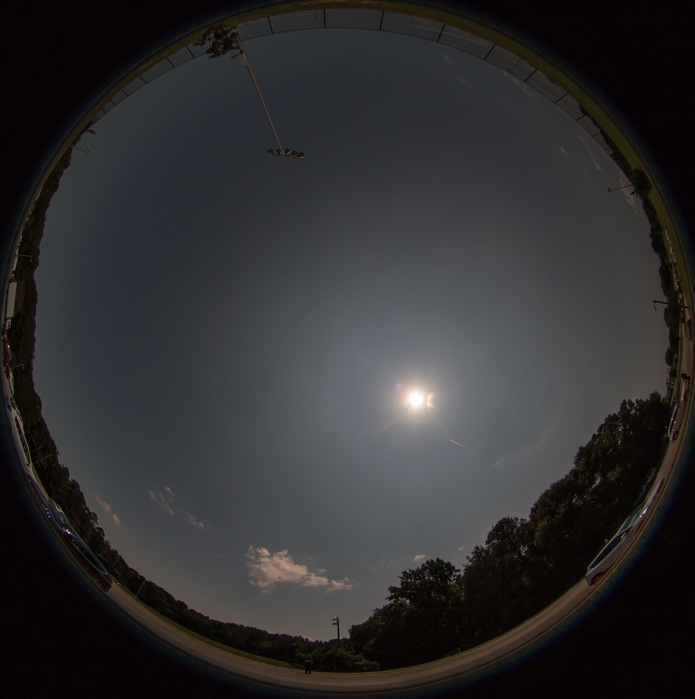 Seth Mayo: This is when things began to get surreal. Just before totality commenced, I could feel a significant bite taken out of the temperature and the sun's light began to take on this sepia-like tone. Through eclipse glasses, I saw a beautiful crecent sun as the moon continued its march across the sky. Eclipse glasses were still a must at this point since the intense photons of light from this nuclear furnace would still be damaging to the eye. 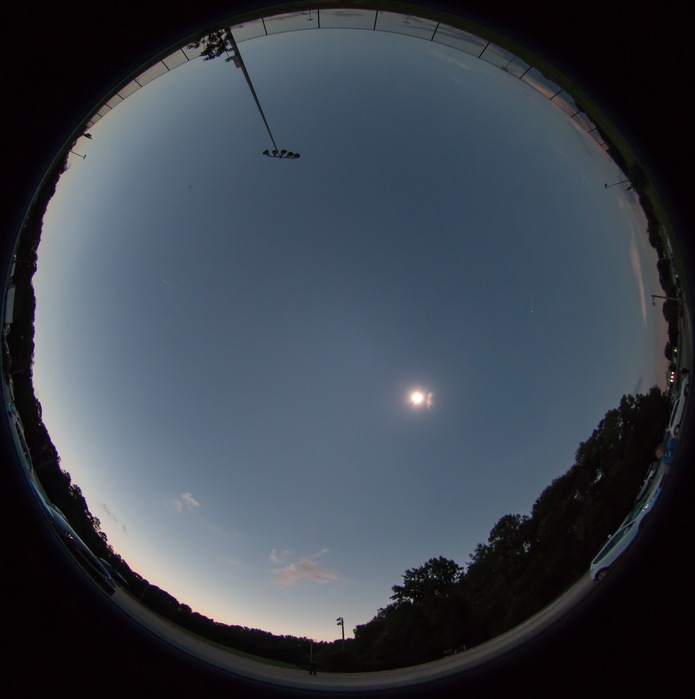 Seth Mayo: As the moon closed in on the sun, I was overwhelmed by the dramatic changes to the environment all around me. The usual intensity of the sun quickly diminished, zapping the brightness out of the sky. One of the first objects I noticed was Venus, located midway between the sun and the right edge of the image. A subtle reddish glow began to appear all along the horizon that revealed the sun's usual brightness shining outside the path of totality. While the light was fading quickly, I was amazed to hear crickets beginning to chrip their usual nightly songs in the middle of the day. 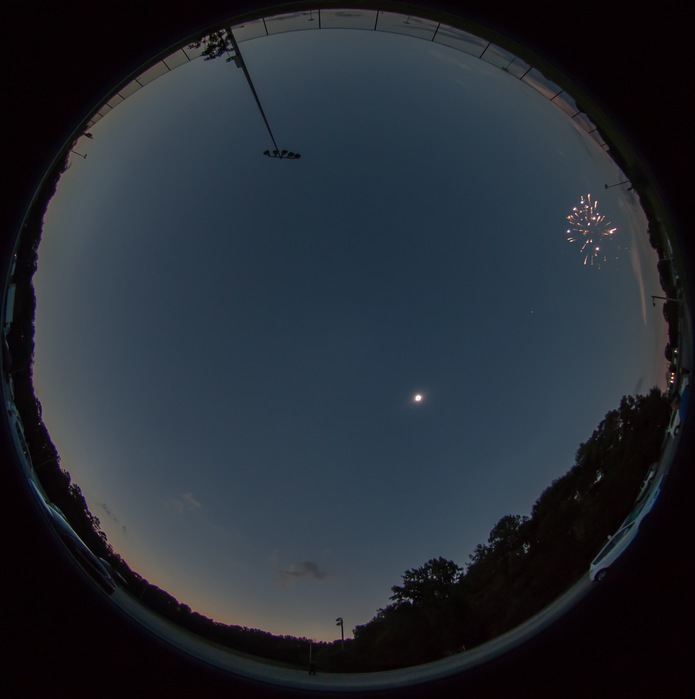 Seth Mayo: Totality!! At 2:37 EST, day suddenly turned to dusk. The crickets were blaring, the right of light on the horizon blazed a brighter reddish orange, and the nsun took on a magical form as its tenuous atmosphere was revealed by the eclipsing of the moon. This is when I could safely take off my eclipse glasses since 100 percent of the sun was being covered by the Moon. The fleeting moment would only last 2 minutes and 11 seconds for me in this location, so I did my best to burn this memory into my mind. Fellow eclipse gazers at the park were hooting and hollering, and some were excited enough to set off fireworks that can be seen at the right. The exposure setting (learned pretty quickly the difficulty of eclipse photography) of the camera could not reveal the handful of stars that I saw popping into view as my eey adjusted to the scene. This was one of the most beautiful things I had ever witnessed in my life. 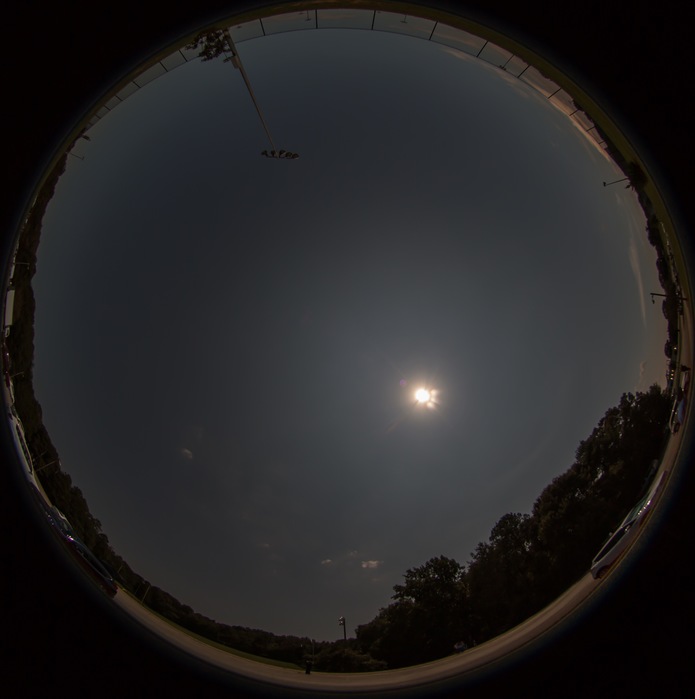 Seth Mayo: Before I knew it, the sun's light exploded back into view, ending totality and turning dusk right back into day again. Just as quickly as the sky faded into darkness, it sped back into daylight, and I was sad to see it over as the sepia tone blanketed the view. With eclipse glasses back on, I could see a solar crescent in the opposite direction as the Moon slid to the other side of the Sun. For me, I found it challenging to truly articulate what I felt about the whole event at that moment, although it was probably apparent with my ear-to-ear smile across my face. 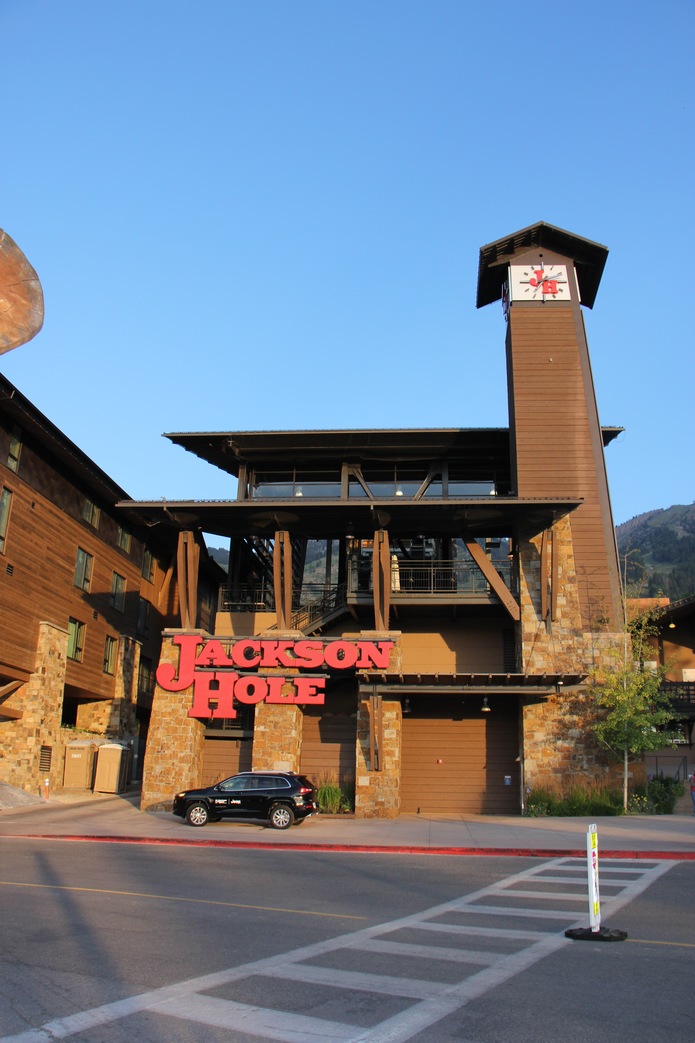 Jason Schreiner: As an excited astrophysicist who had been preparing for this eclipse for over a year, I was not willing to chance any issues with east coast summer weather. After extensive research on the best place for viewing, I selected the Teton Village Ski Resort in Jackson Hole, Wyoming. This location promised clear, comfortable weather, as well as a fantastic backdrop of the Grand Teton mountain range. 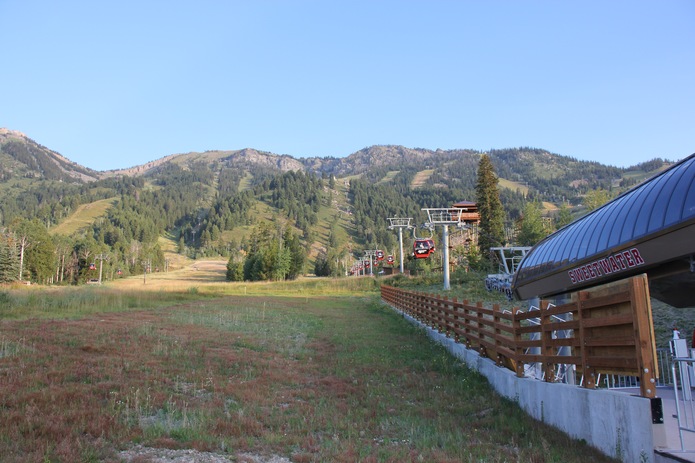 Jason Schreiner: Since all of the eclipse area flights and hotels had been booked for years, I entered Wyoming via Salt Lake City, Utah. After a pleasant sightseeing tour through The Crossroads of the West, I made the five hour drive past the Great Salt Lake in Utah, the never ending fields of hay in Idaho, the switch-bak mountain roads and snow-capped peaks of Teton Pass in Wyoming, and arrived at the center line: Teton Village in Jackson Hole. After a few restless hours of sleep in my rental truck, I awoke at 5:30 am to a crisp 39 degree morning. I picked up my reserved lift ticket and was first in line for the 8:00 am Sweetwater Gondola Ski Lift. 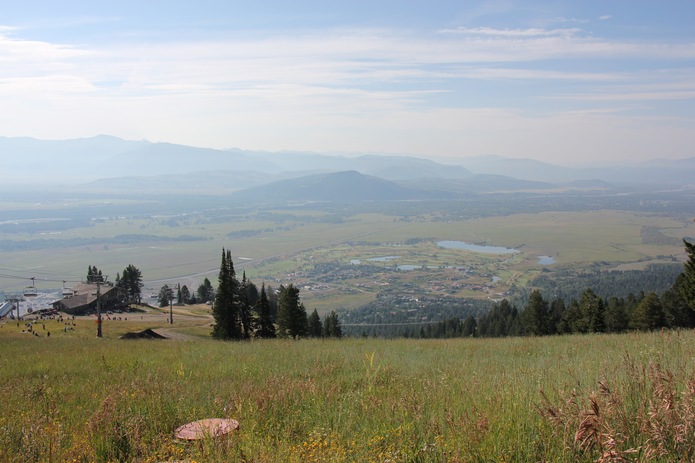 Jason Schreiner: After being dropped off from the ski lift, people hiked farther up the mountain to stake our a viewing spot. The panoramic view from 8,961 feet extened for dozens of miles into the distance. 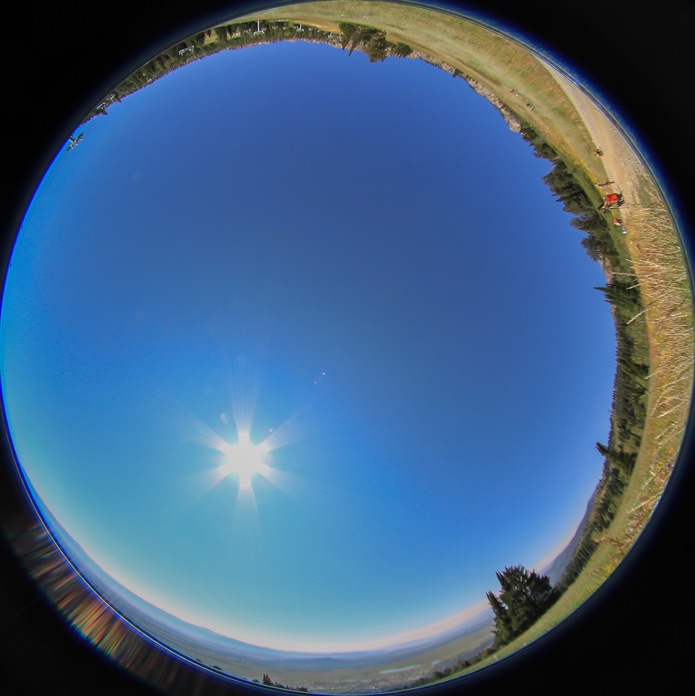 Jason Schreiner: Pictured here are the first moments of the eclipse at 10:16 am MDT. Eclipse glasses allowed me to see the sliver of the Sun blocked by the Moon's edge. At this first Moon sighting, the sound of people howling like wolves came like a wave across the mountain. I could not see the other people from their locations near the other ski lift areas, but I think we all felt a special connection to each other over our shared experiences. 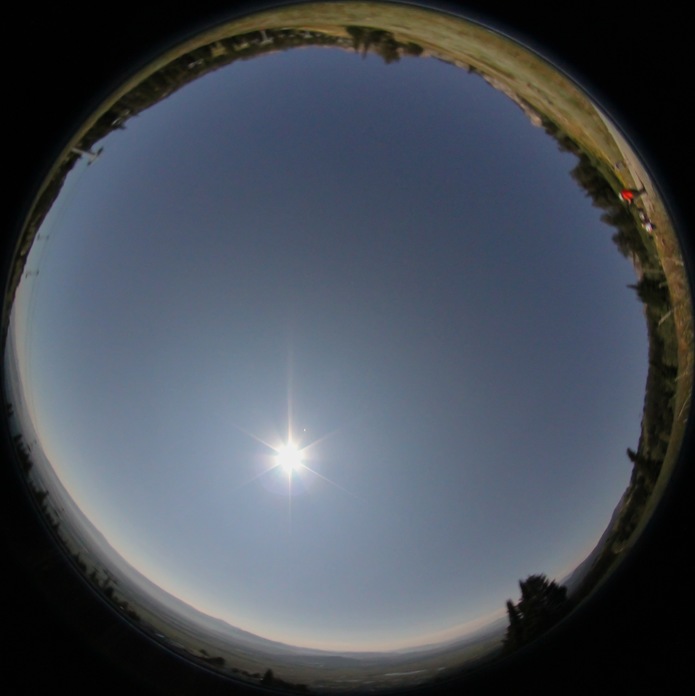 Jason Schreiner: Pictured here is the sun at 85% coverage. These were the first signs of obvious change, as the gray color tinted the landscape. It felt as if I were viewing the world through a movie filter. It was very different than a simple dimming of the sunlight from clouds. 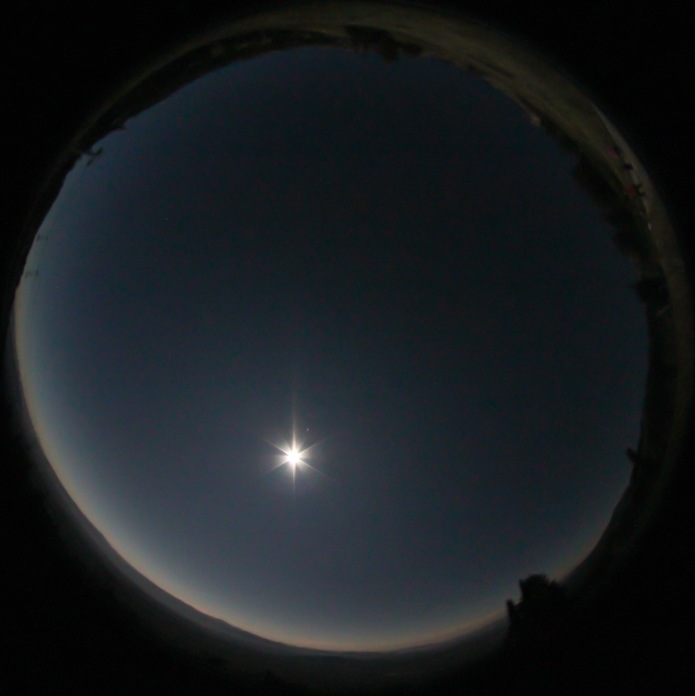 Jason Schreiner: Pictured here is the sun at 95% coverage and true weirdness. Shadow bands (or shadow snakes) danced across the ground. Notoriously difficult to capture on film or video, I was fortunate to even see these subtle, but mesmerizing wavy lines of light and dark as they were focused through our atmosphere. 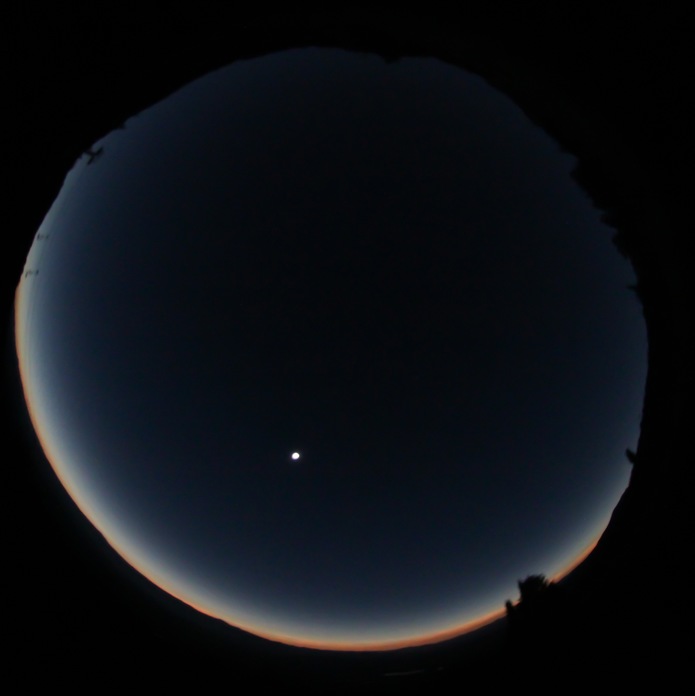 Jason Schreiner: Pictured here is an image of totality which began at 11:34 am MDT. Easily the most incredible thing I have ever seen in my life. Day turned to night in a second. In the dry, thin air of the mountains, heat escapes quickly without sunlight, so the temperature dropped about 30 degrees. Insects stopped buzzing and time seemed to stand still. The perfect circle of hte moon was surrounded by the wispy corona of the sun on a deep navy sky, perched on a tangerine sunset in every direction. Venus (normallly invisible at this time) and Mars came into view, as well as a handful of stars. Crowds cheered in unison, then settled into a truly awed hush for an unforgettable 2 minutes and 20 seconds. My brain completely stopped working, and I believe I let out an excited noise while my jaw dropped and I help my head in my hands throughout. It simultaneously did not seem real, but also was the most present I have ever felt in my life. 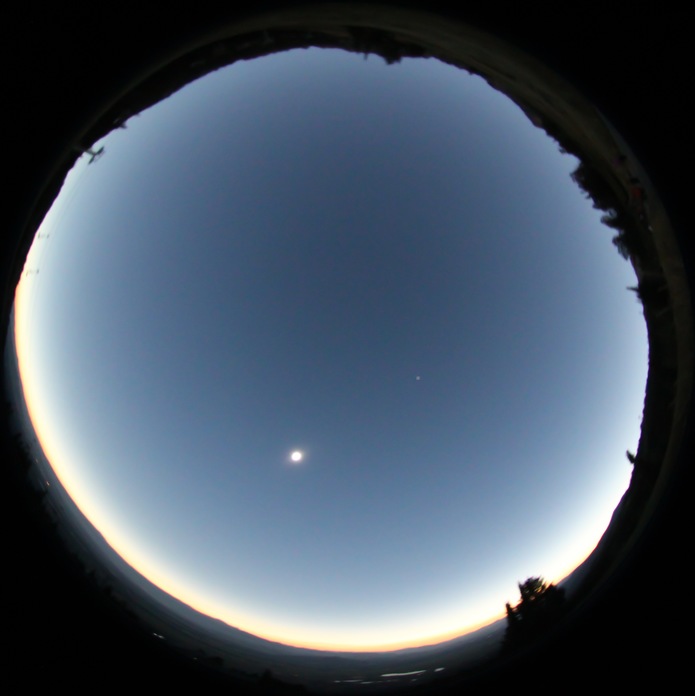 Jason Schreiner: All good things must come to an end. The moon glided past the edges of the sun as daylight returned, and the shadow snaked for one more pass. Gray tones evaporated, insects buzzed, and birds chirped once again. A few minutes later, it was as if nothing had ever happned. I returned to reality, physically and mentally exhausted, but with a newfound addiction to eclipse viewing. I am already planning for the next eclipse in 2024.